EXO’s Kai Talks About Solo Album, What Dancing Means To Him, And More

EXO’s Kai recently participated in a pictorial and interview for W Korea!

First off, Kai shared something he couldn’t do. He said, “There are many things I can’t do, and one of them is doing something with my body.”

The interviewer was surprised because he’s known for having a good physique. He candidly replied, “I really can’t do it. I can’t do anything related to my body other than dancing and posing for photos. I’m not good at sports, and I easily break stuff. I have a habit of spilling things, and I lose a lot of objects. I usually don’t like complicated things, and I tend to just live indifferently.” 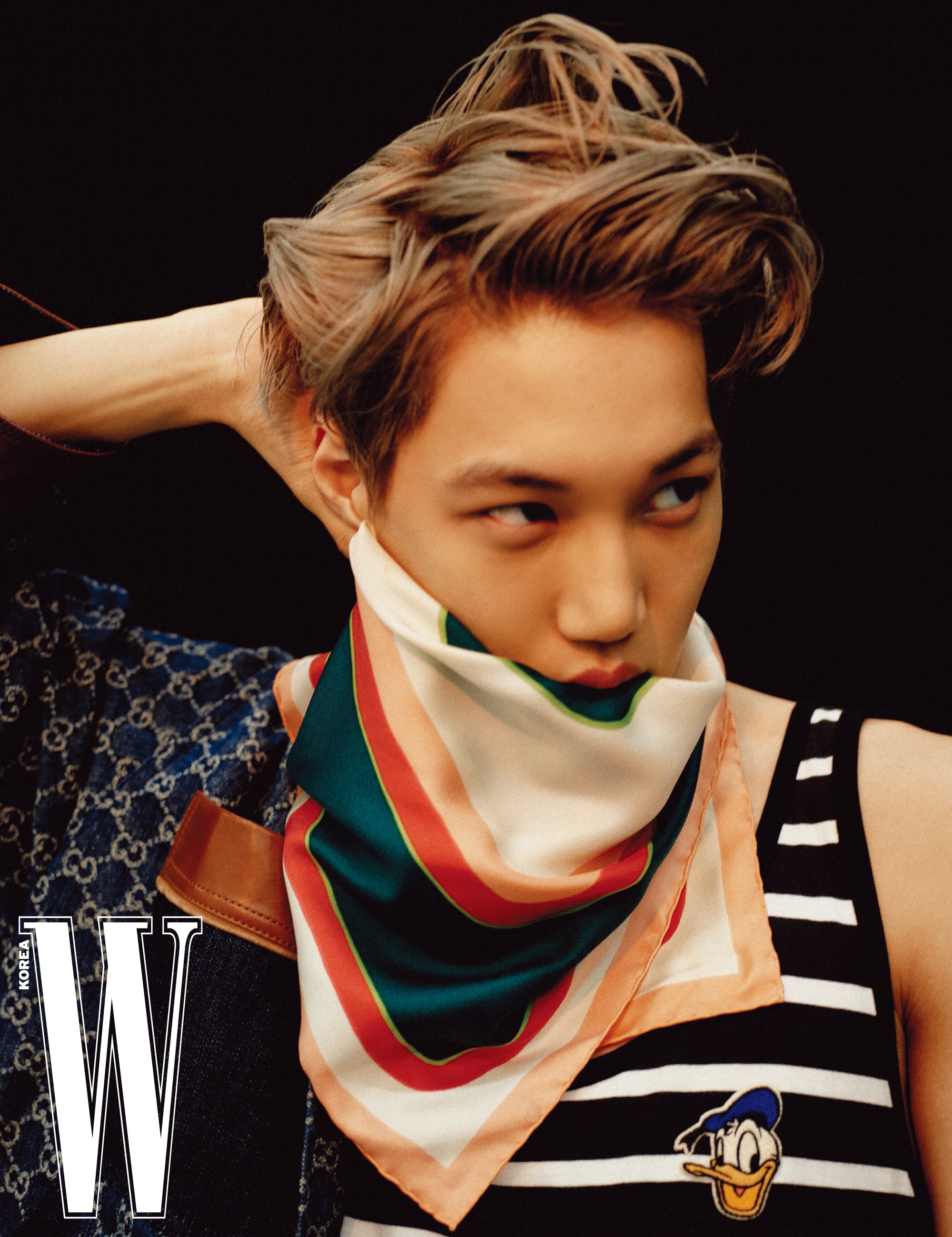 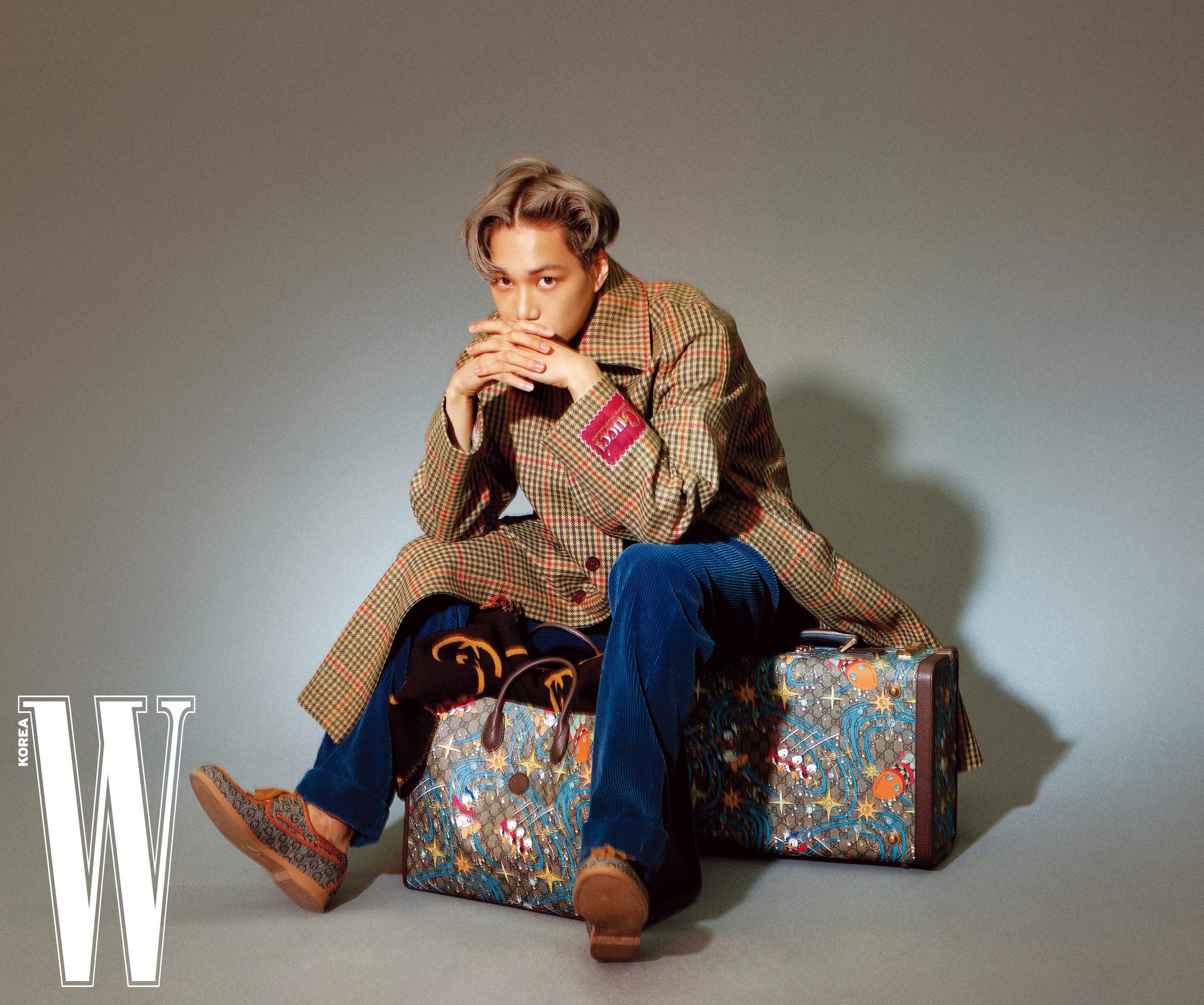 Then Kai talked about his title track “Mmmh.” He said, “The word ‘Mmmh’ is used in various cases and has different meanings. It is a word that is often uttered unconsciously in one’s life. We even said it just a moment ago. It is also used as a sign of understanding and to indicate a time when we’re thinking about something. I thought it would be fun to express that kind of ‘Mmmh’ in a simple way, so I portrayed that in the music video. The video has a dystopian vibe that takes place in the future, and it expresses my existence as a god who meets various worlds and people.”

He also shared his thoughts about the long, sparkly hat from the music video and music show performances that garnered a lot of attention. He commented, “I thought I should wear a hat to stimulate various imaginations. The hat feels a bit mysterious, and since it covers a part of my face, it makes it a bit tantalizing. It also gives me a sense of freedom when I take it off.”

The interviewer pointed out he isn’t a vocalist in either SuperM or EXO but managed to sing all the songs in his solo album alone. Kai explained, “It took about eight months to make the album. Of course, I have been practicing singing since I was a trainee, but I practiced in earnest while preparing for this album. But my goal wasn’t to show one specific thing, like ‘a singer who dances very well’ or ‘a singer who sings well.'”

He continued, “I want to use everything as a tool in order to create the image of Kai. Titles, such as artists who perform well or dress well, do not matter much to me. The image that people feel and think about when they hear my name is more important. I want to make everyone look forward to my next performance. If there is anything I want to show and express in my activities for this album or the next one, I want to use the experience I have as a singer who’s been active for ten years, what I learned as Gucci ambassador, and whatever else to express that.” 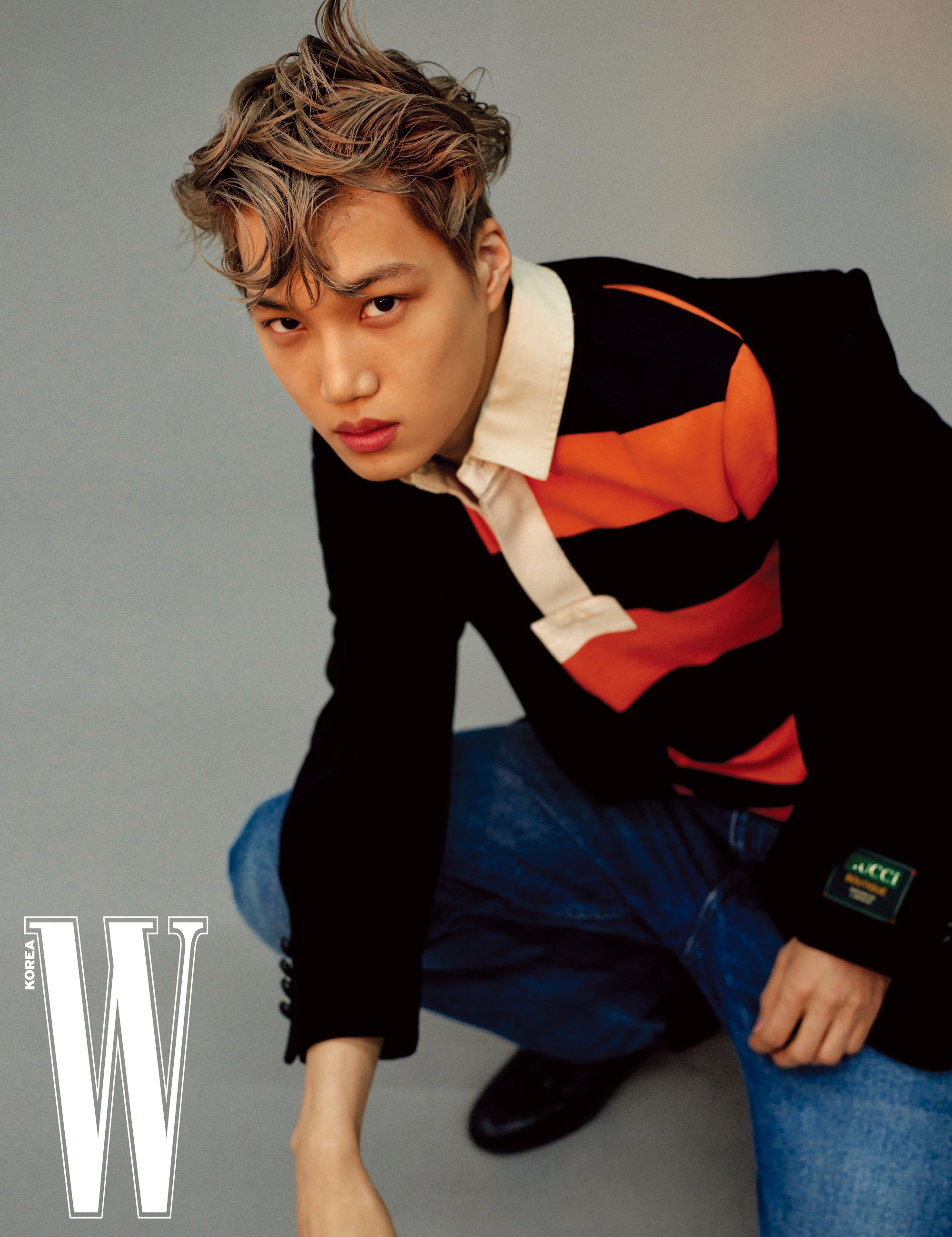 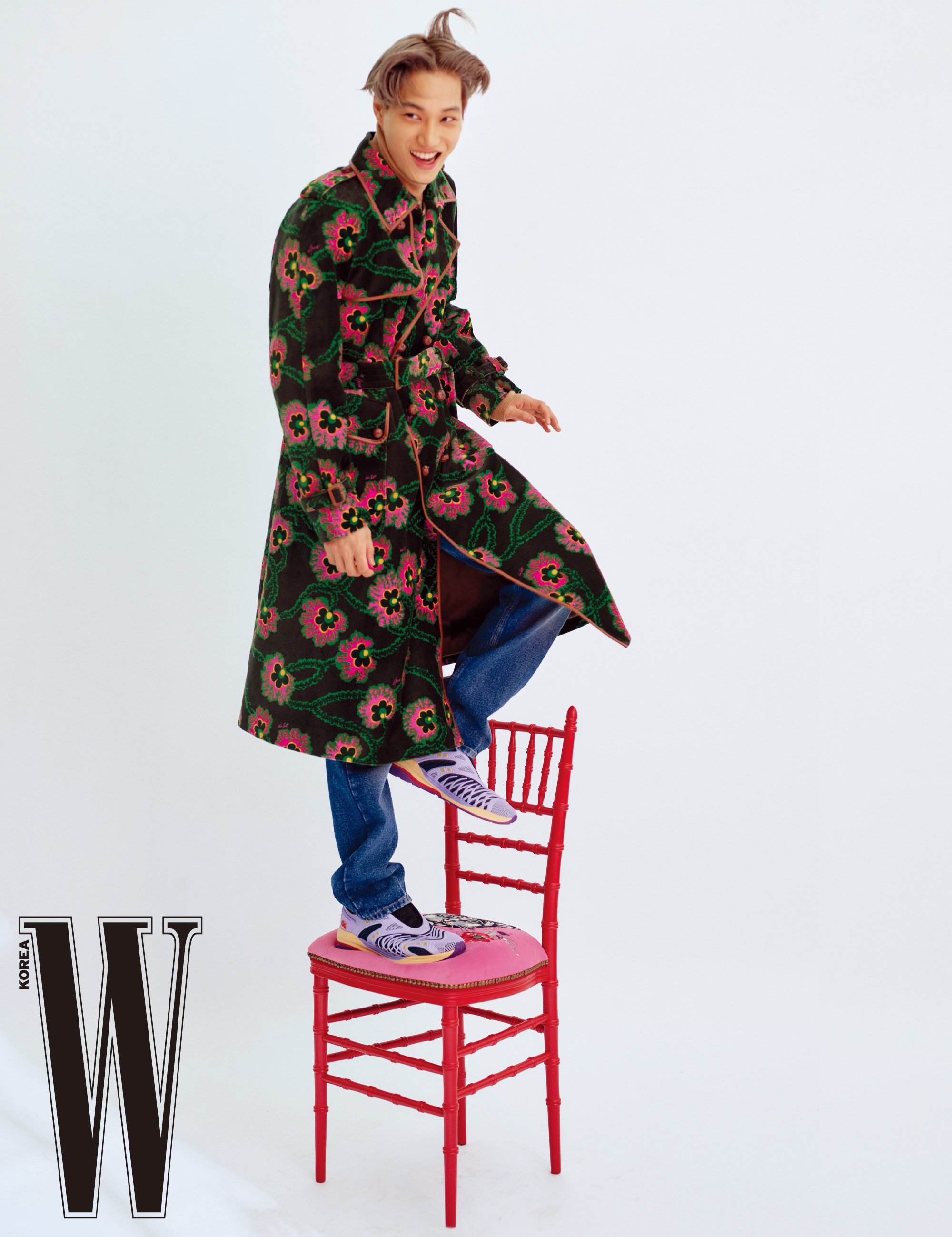 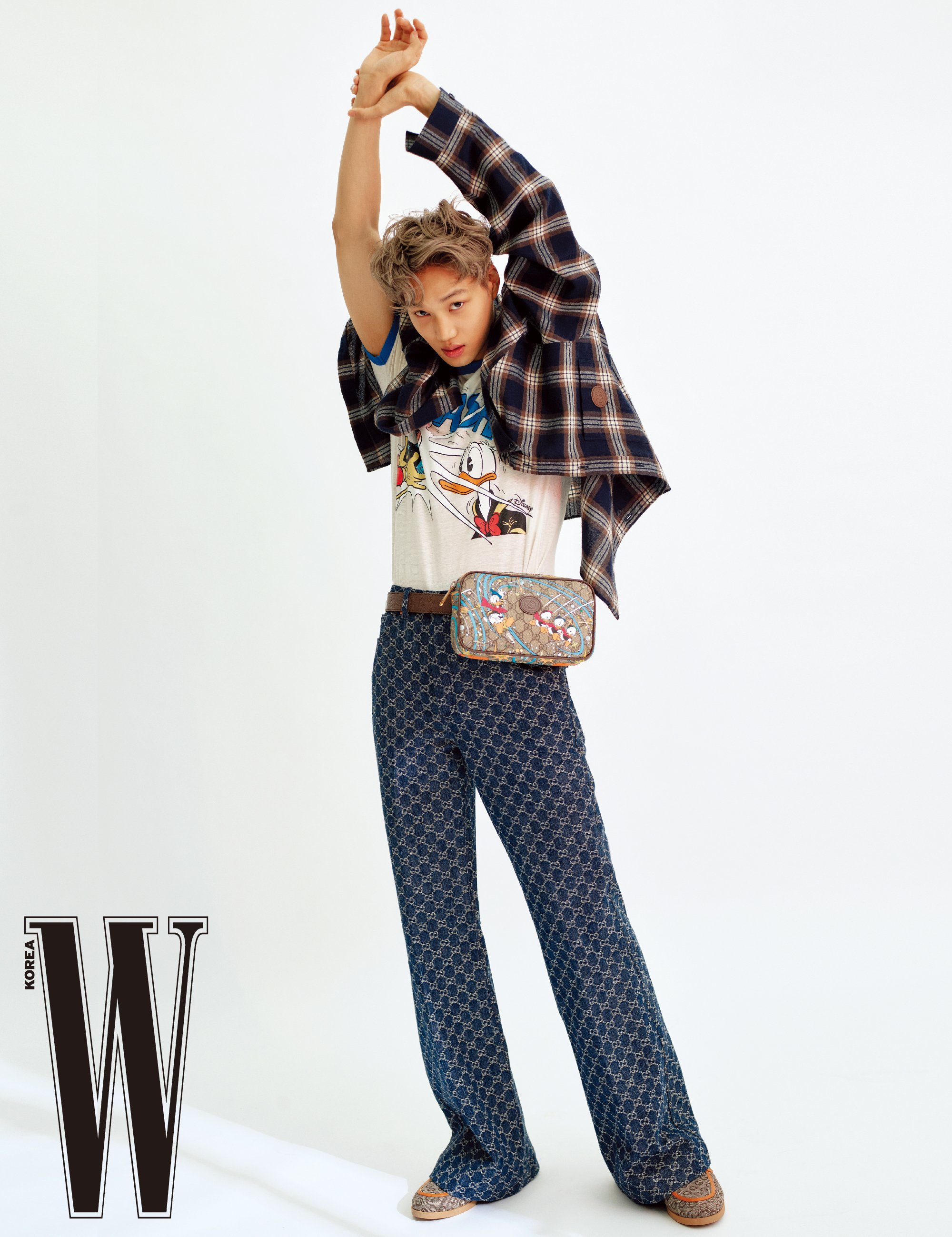 The interviewer commented that Kai seems like a perfectionist who will accomplish something he wants with fierce determination. Kai shared, “I’m not that kind of person. I just do what I need to do. I do whatever I need to as much as I need to. As I said in a previous interview, I don’t want to do anything with the mind of conquering something under the idea of becoming the ‘king of dancing.’ If I want to accomplish something, I try not to overdo it or lack the effort for it. Any artist will think of the best picture, so they will give it their all.”

Kai explained more about the idea of finding the appropriate amount of something. Laughing, he commented, “I’ve already lived with fierce determination before. I don’t do that anymore because experience taught me that it’s not good to live like that. With this album, I performed at three broadcasting companies. It was the first, second, and third day of my solo performance. It was hard because I didn’t like something on the first day. I tried to make up for it on the second day, and on the third day, I wasn’t satisfied, but I was getting better and better. I think that kind of flow is enough. I no longer try to memorize things, and I don’t fix my attention on where the camera is filming me.”

When asked if he ever grows sick and tired of dancing or performing, he said, “Of course. Sometimes I experience a lot of pain. I was really stressed out when I wasn’t satisfied with myself. It was eating away at, not just Kai, but Kim Jong In (his real name) as well. I truly realized that’s not healthy, and I had to get rid of it. Ever since then, if I feel like I’m about to get stressed, I first examine why I’m feeling that way. I try to think. Then I control my mind, and I shake it off here and there.”

The interviewer pointed out he seems like someone who knows how to treasure himself, and he responded, “I have to treasure myself. Everyone needs to treasure themselves. For those who can’t do that well, they’ll be able to change once they go through an extreme situation. However, it’s best to change before one experiences that. Aren’t we all living to be happy? I think you need to make an effort to be happy. What I always seek is happiness.”

Then Kai talked about his love for his family. He said whenever he’s troubled, he either thinks about it himself or shares his concerns with his family. He added he was grateful to them and commented, “The first most important thing is myself. I have to be happy. My family comes next, and my work is third.” 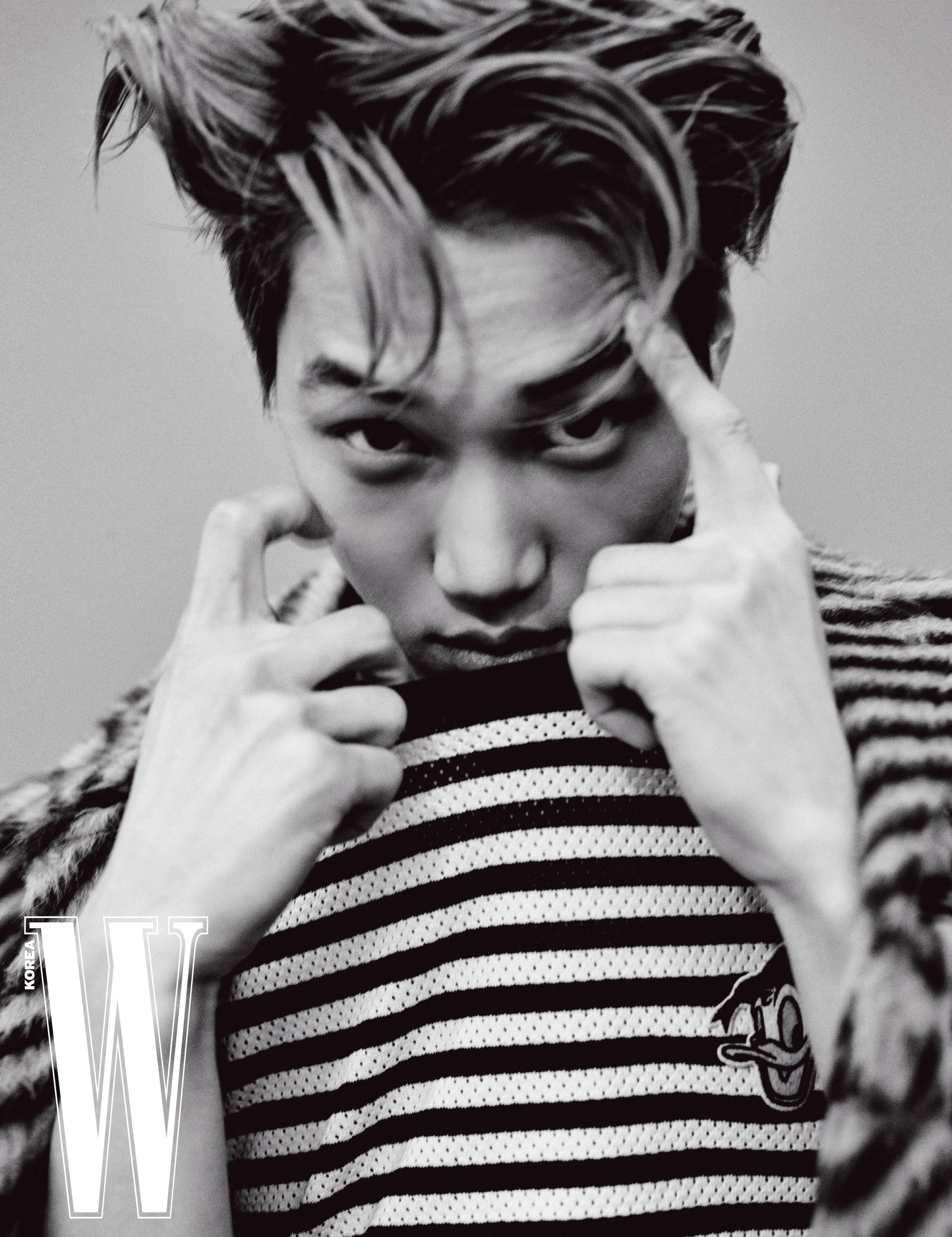 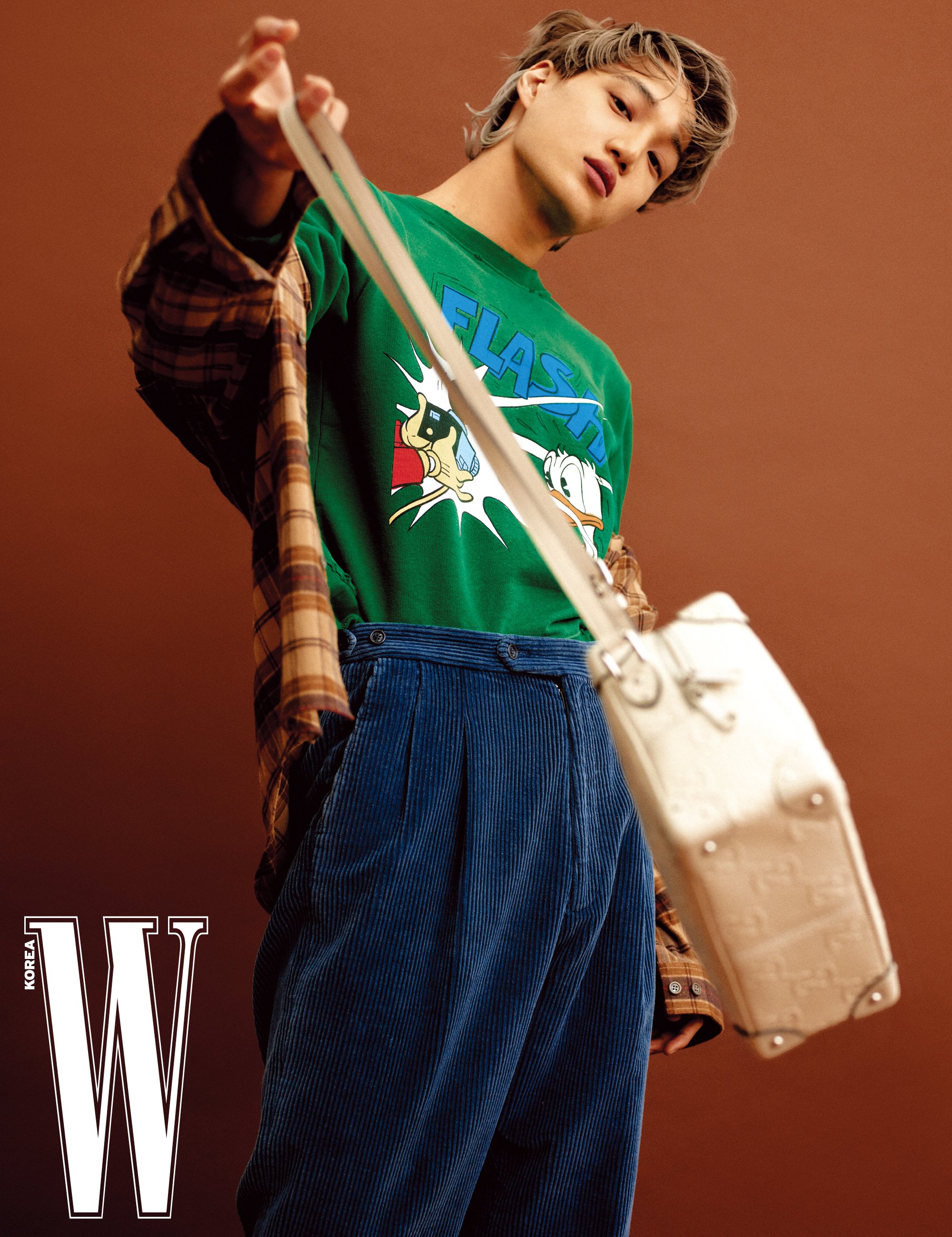 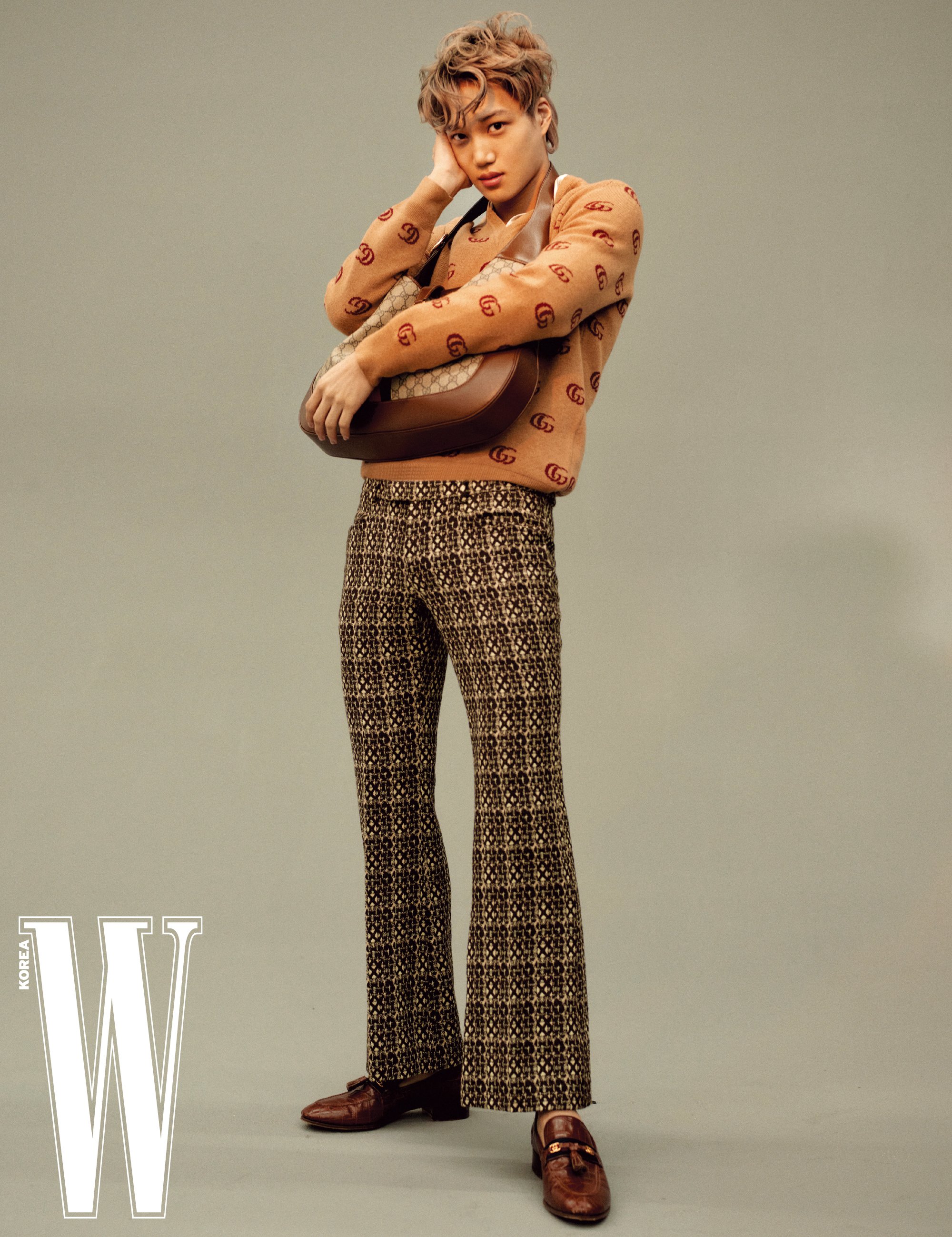 Then he was asked about what he would do if his niece and nephew become disappointed they won’t receive his whole-hearted support. He shared, “The reason I became an idol was just because I liked dancing. It wasn’t because I wanted to be a star. I think I can be happy as long as I can dance. Anyone can try to get a related job by doing what they like, and if it doesn’t work out well, they can still do what they like and change their jobs. Their lives won’t be ruined just because they don’t get the job they want. They have to think separately about what they like and what they’re good at.” 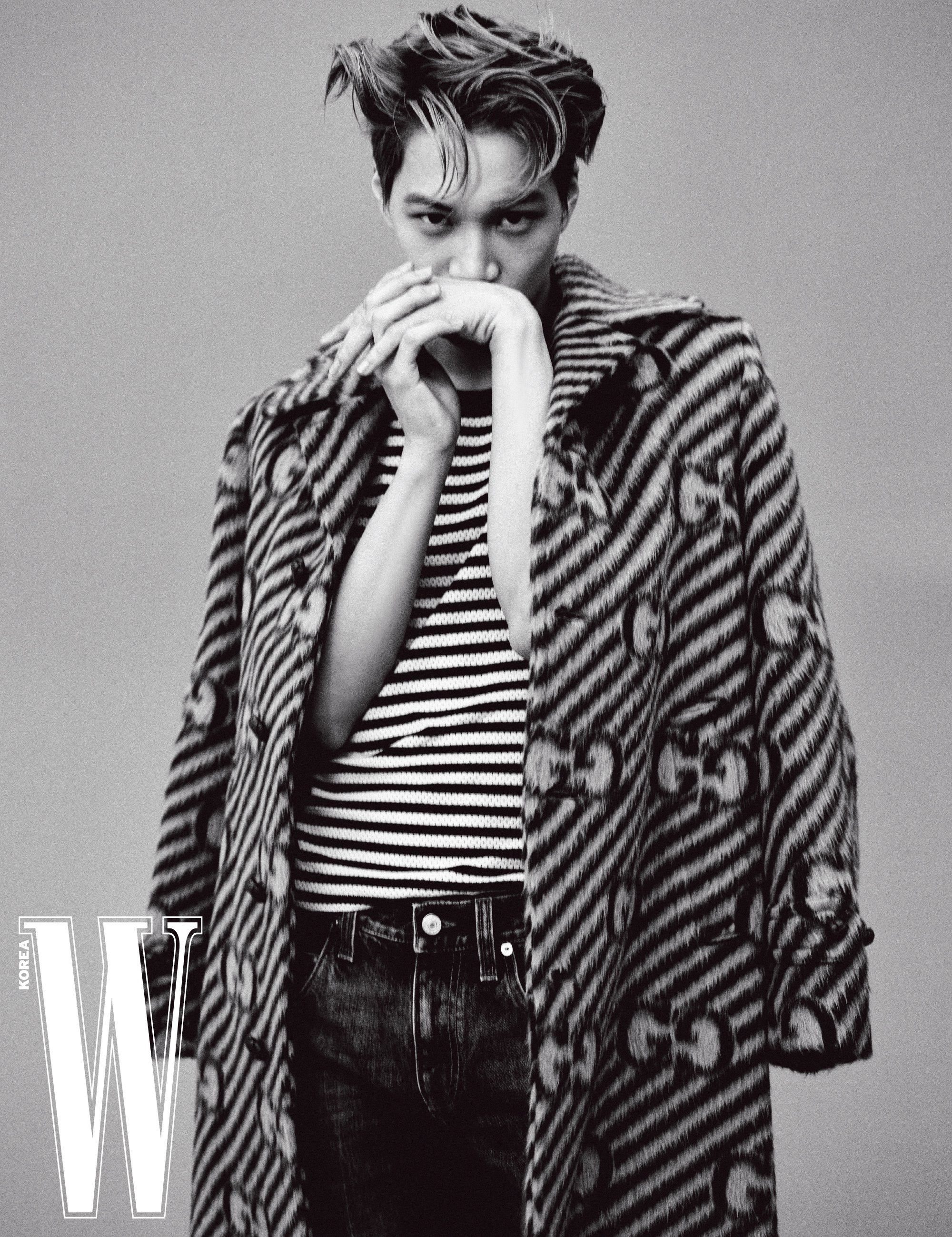 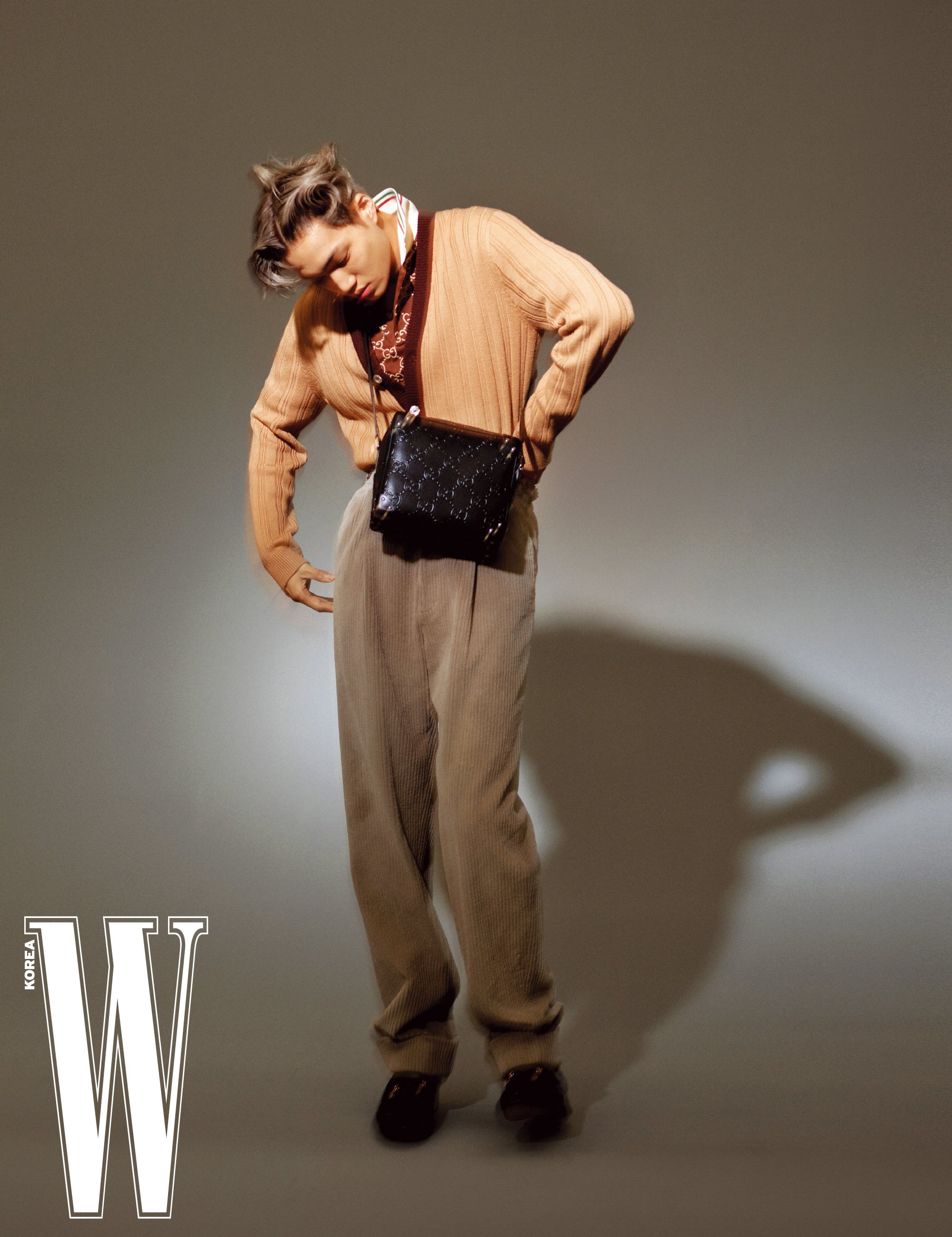 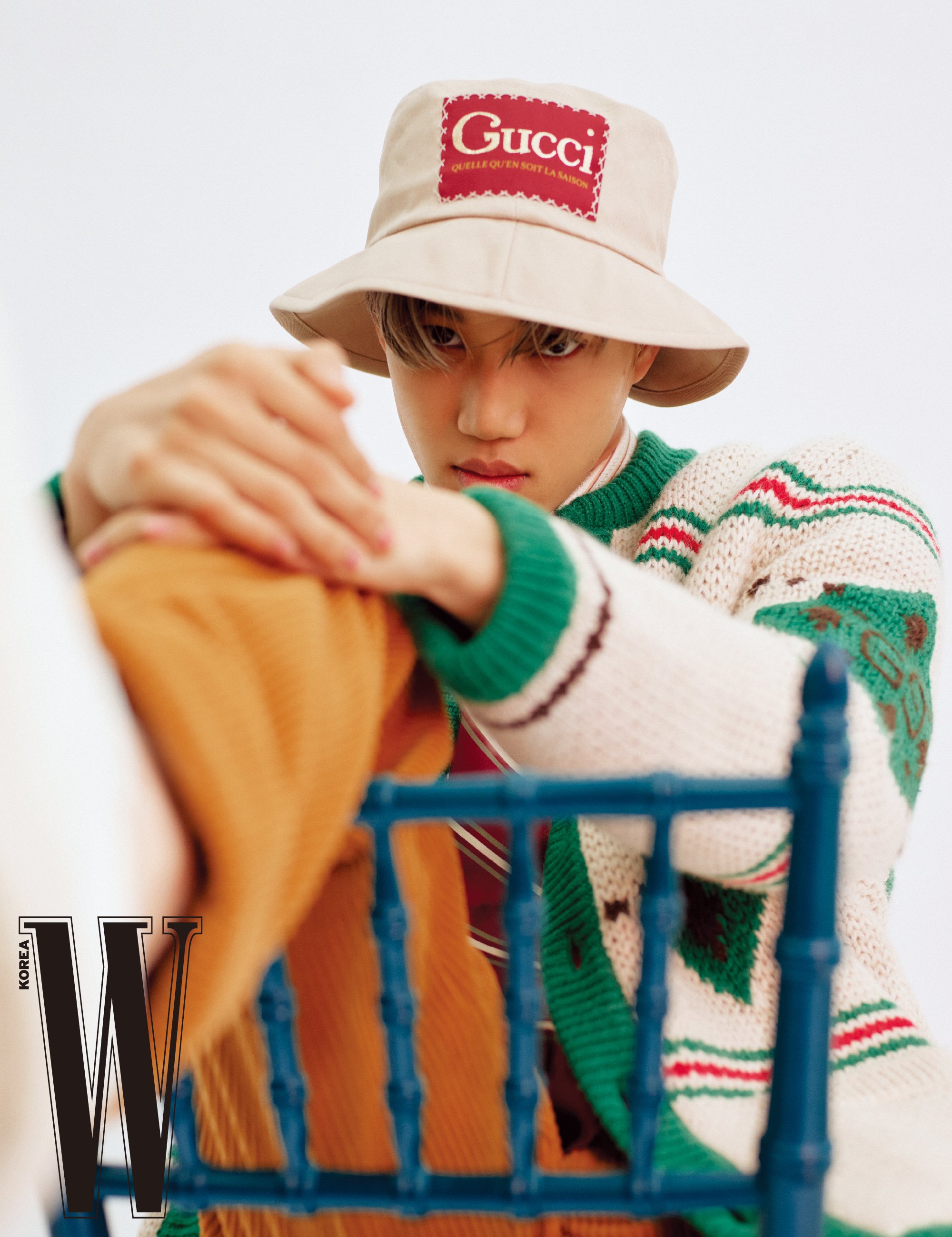 Kai didn’t forget to mention his fans. He talked about his relationship with them, saying, “We’re going on the same path together. Not only do we walk together now, but we can look back on our past on that road. The fans see the result of our relationship during the concert when we perform.”

He shares he also enjoys watching the process of the audience becoming a fan. He said, “At first, they’re just a member of the audience, but they become a fan after seeing the performance. They become interested and learn more about the artist. They progressively go on the same path as the artist, and when they go to the concert, they will feel like they helped create that stage. They’ve been supporting us, so we can feel the same emotions.”

Lastly, Kai was asked if he was happy, and he genuinely replied, “I’m happy. And I’m having fun. Fun is important as well. When I see the fans happy, I grow even happier. I mean it.”

EXO
Kai
W Korea
How does this article make you feel?