The cast of SBS’s “Running Man” cleared the air in the show’s final episode of 2020!

Before the guests arrived, however, the “Running Man” members were asked to write about times when they felt disappointed or resentful toward each other in 2020. At first, the cast said that there was nothing, but they soon queued up in front of the booth to list all their resentments. 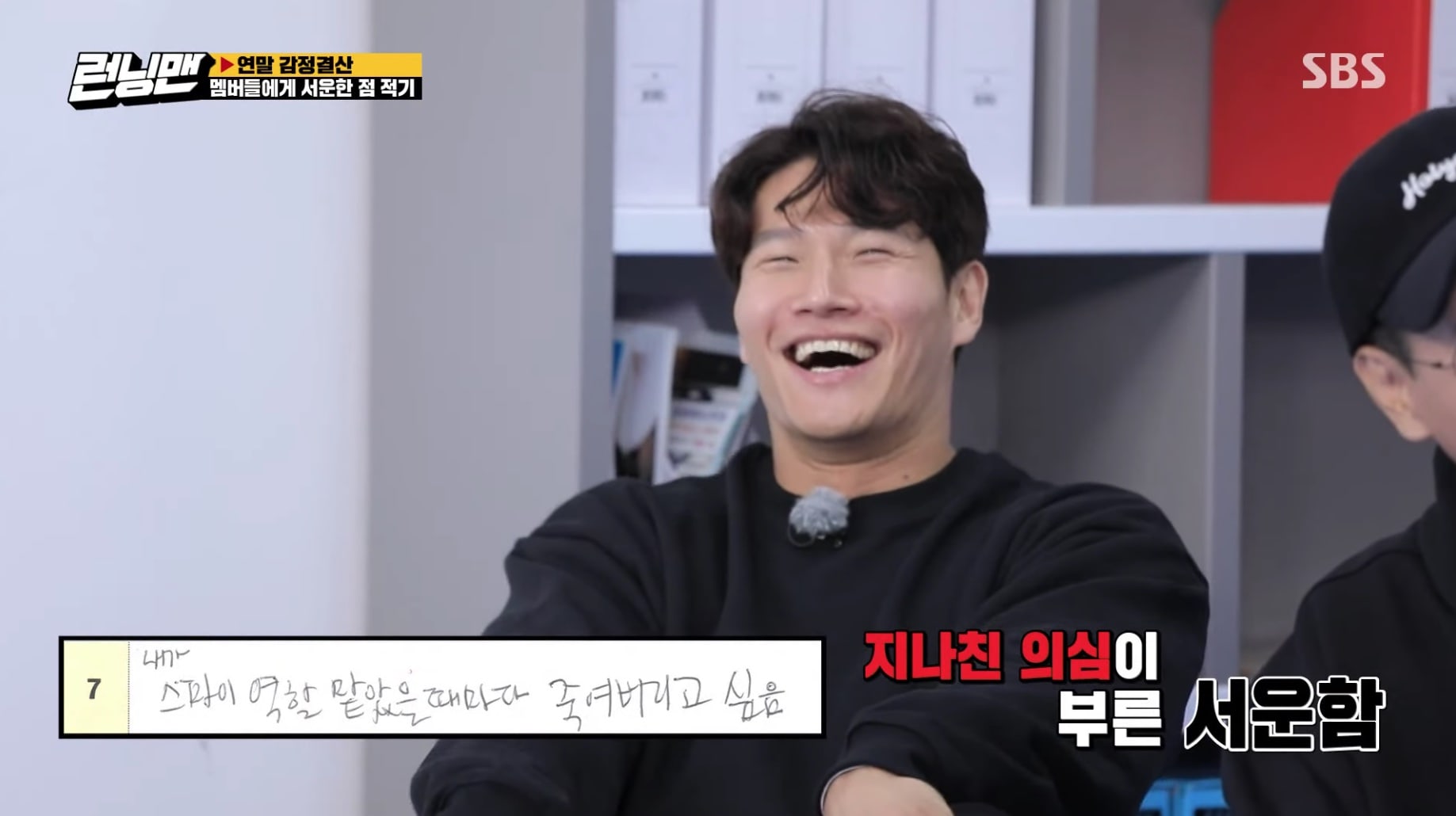 The cast members used this chance to poke good-natured fun at each other, tattle on other members, and make jokes rather than listing real resentments. Some resentments leveled at Kim Jong Kook included, “He doesn’t know how to control his strength. He doesn’t think before suspecting people. He makes me want to take him out when I’m a spy. He only likes his daughter. He only spends money on his daughter. [This reference to a non-existent daughter is a long-running joke on “Running Man.”] Se Chan secretly talks about him behind his back. He’s definitely a spy but he gets out of suspicion through sheer strength.” 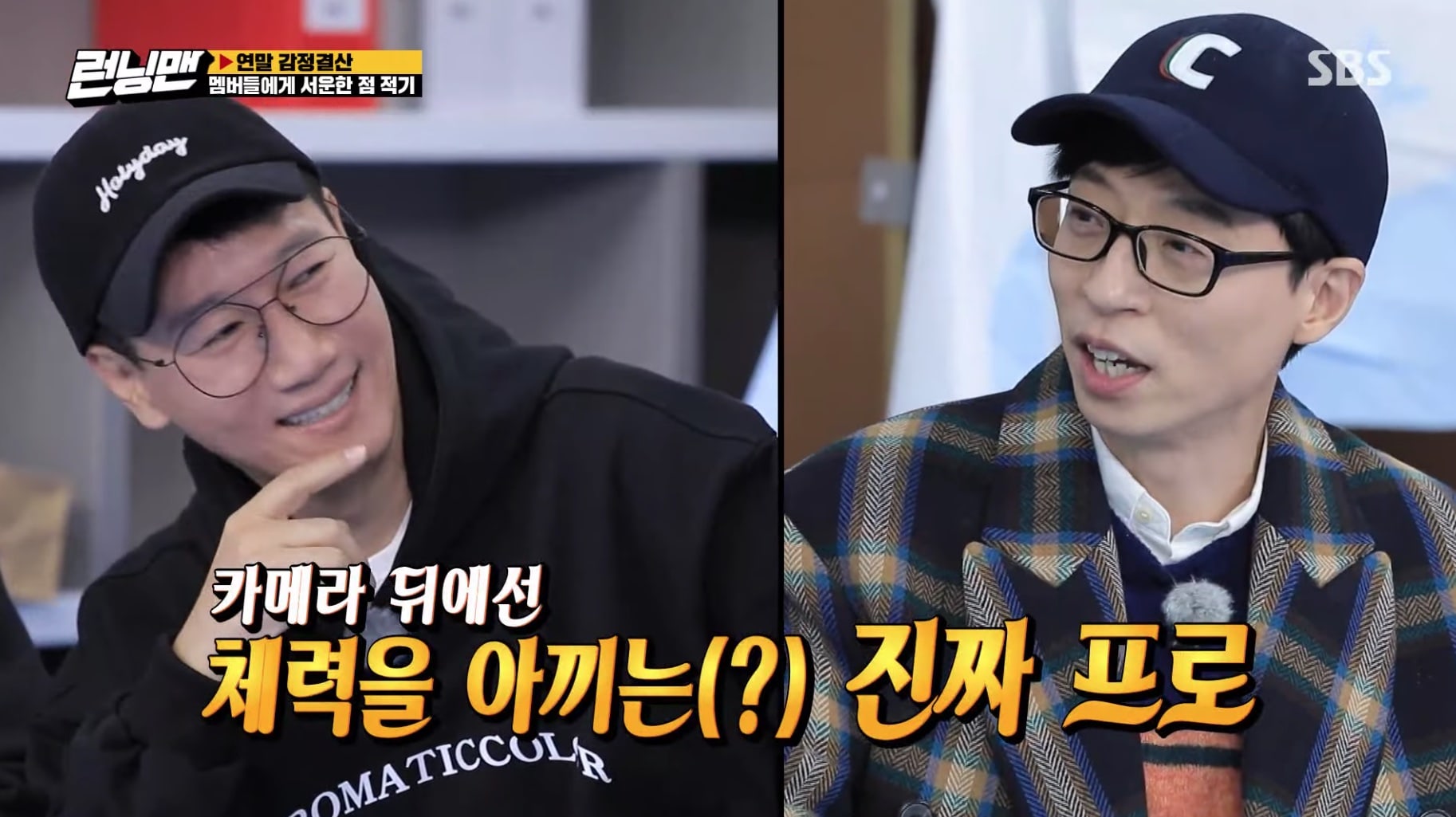 Ji Suk Jin’s list of resentments included, “If there’s no camera and he doesn’t have his microphone, he won’t talk to us and greets us half-heartedly. He exaggerates himself as a ‘family man.’ He plucks the hair growing in his ears. 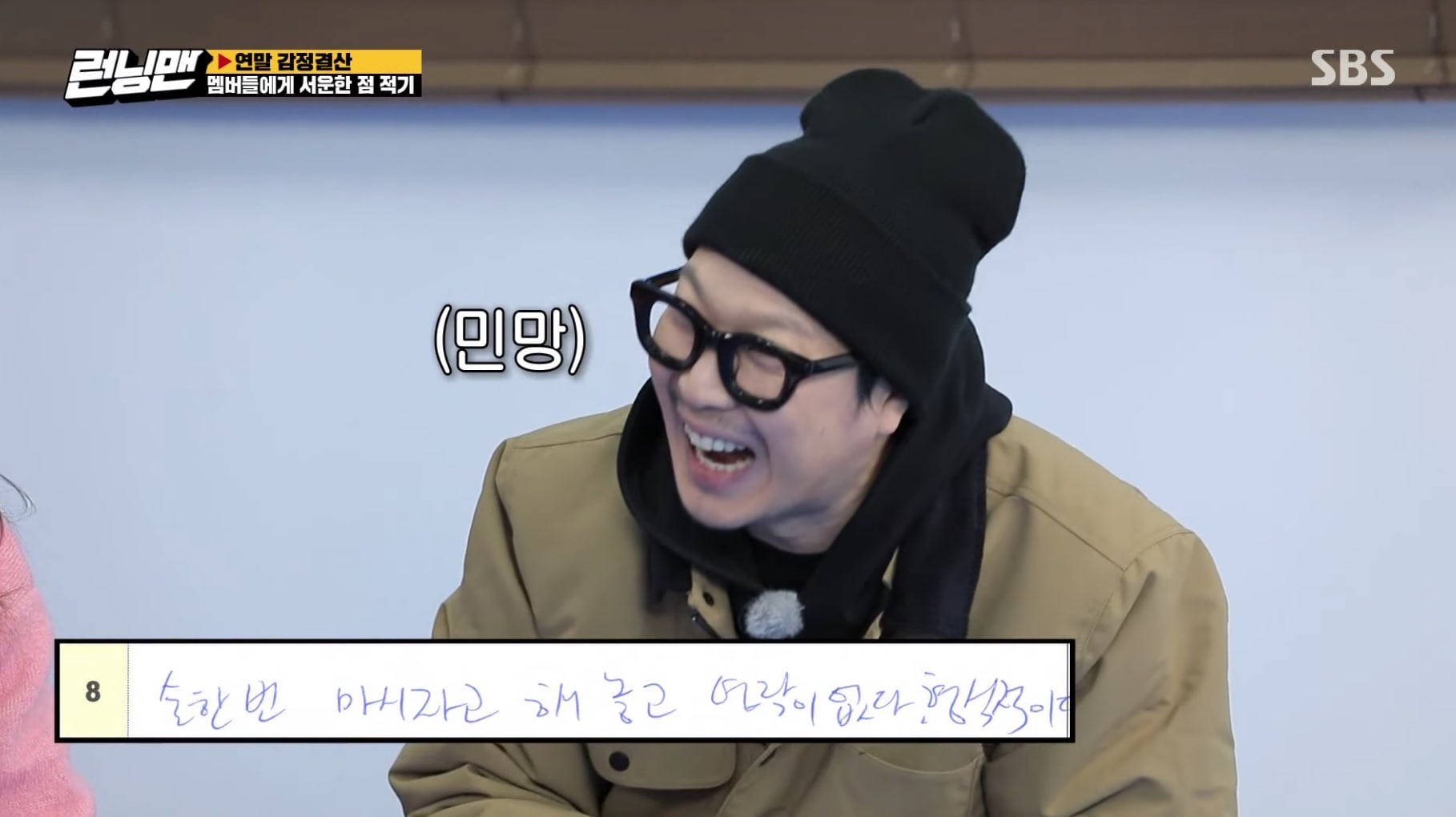 HaHa’s included, “He says we should go out drinking but he never sets a date. He acts too formal with us,” and “When I was a spy, he told me off-camera that if I told him the truth, he would keep it a secret. I told him and he immediately told everyone else and ripped off my nametag.”

Lee Kwang Soo’s list was mostly comments on his appearance, from his looks to his fashion choices to his long hair to his height. One example was, “He could grow three meters [about 9.83 feet] but he is lazy.” Yoo Jae Suk also got comments on his appearance, but also comments like, “He tries to end phone calls quickly. His hair style is boring.” After a comment about his teeth, Yoo Jae Suk complained, “It would be weirder if I got them fixed.”

Song Ji Hyo’s list was about her infamous lack of contact with the other members, such as “I sent her a message saying she worked hard on our first recording and she still hasn’t replied. She doesn’t pick up phone calls. I want to see her clear gaze for once.” 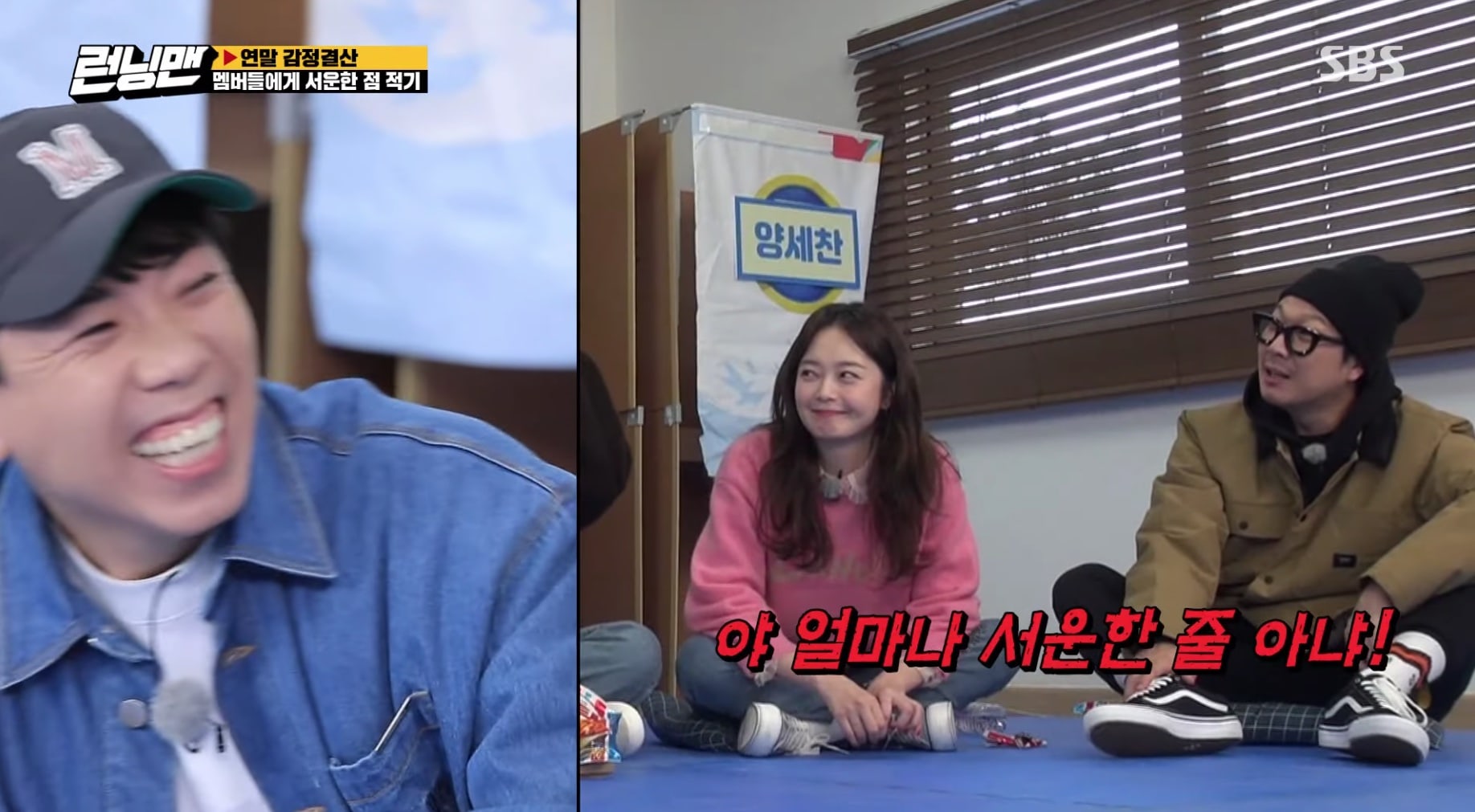 Yang Se Chan’s started off with, “He says that he has a meeting for ‘Comedy Big League’ and is on a call for two hours and doesn’t call me back.” Kim Jong Kook said suspiciously, “Maybe he has a girlfriend.” Others were, “We went hiking in the mountains together and he insisted we take a path that was not the right path but he made me go first. He looks like a squid. He likes Jun So Min and won’t confess his feelings.” (This last one was HaHa, who also made up the rumor about Kim Jong Kook’s secret daughter.) 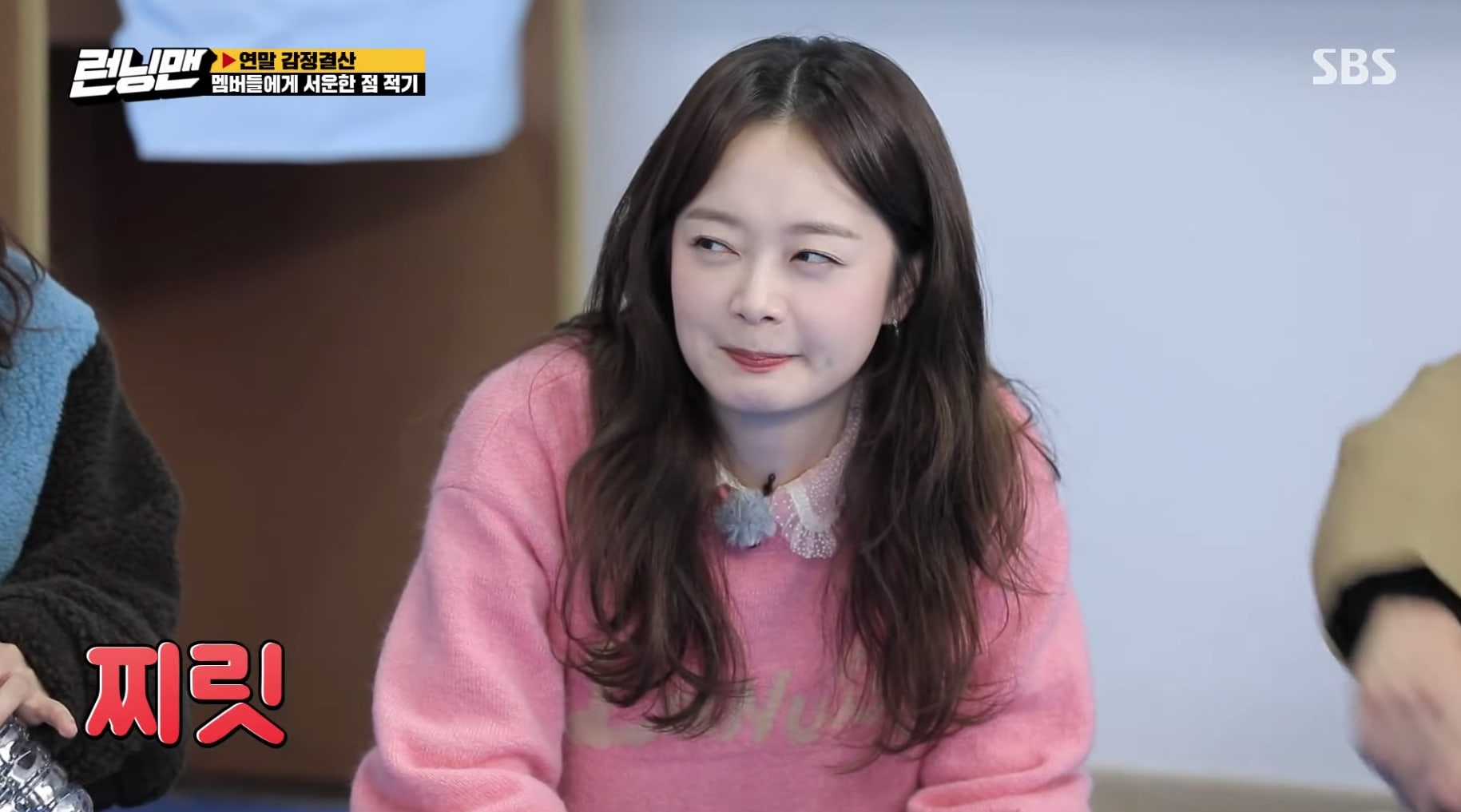 Jun So Min’s list went, “She lies too much. I can’t trust her. She’s so suspicious. She said that she wouldn’t, but she still goes around suspecting people. She forces too much love lines.” (This last was Song Ji Hyo.)