Watch: Girls’ Generation’s Sooyoung And Kang Tae Oh Joke Around Behind The Scenes Of “Run On”

JTBC’s “Run On” takes viewers to the poolside with a new behind-the-scenes look at the drama!

“Run On” is a drama about people trying to connect with each other in their own languages after having lived in different worlds and at different paces. Im Siwan stars as Ki Sun Kyum, a former track and field athlete who retires after a life-changing event and becomes a sports agent. Shin Se Kyung co-stars as Oh Mi Joo, an adventurous foreign film translator.

Sooyoung plays Seo Dan Ah, an ambitious sports agency CEO who believes the only way to fail is to not try at all. Kang Tae Oh takes the role of Lee Young Hwa, a popular art student who is handsome, kind, and charming.

The video gives viewers a closer look at the unusual first meeting between Sooyoung’s and Kang Tae Oh’s characters. Sooyoung watches with interest while Kang Tae Oh stares into the swimming pool, planning out how he will fall into the water. Sooyoung teases Kang Tae Oh after he makes a false start, but soon he falls into the pool with a spectacular splash amid applause from the surrounding staff. When he climbs out of the water, Sooyoung asks, “It feels good, right?” and Kang Tae Oh responds by playfully rolling back into the pool. 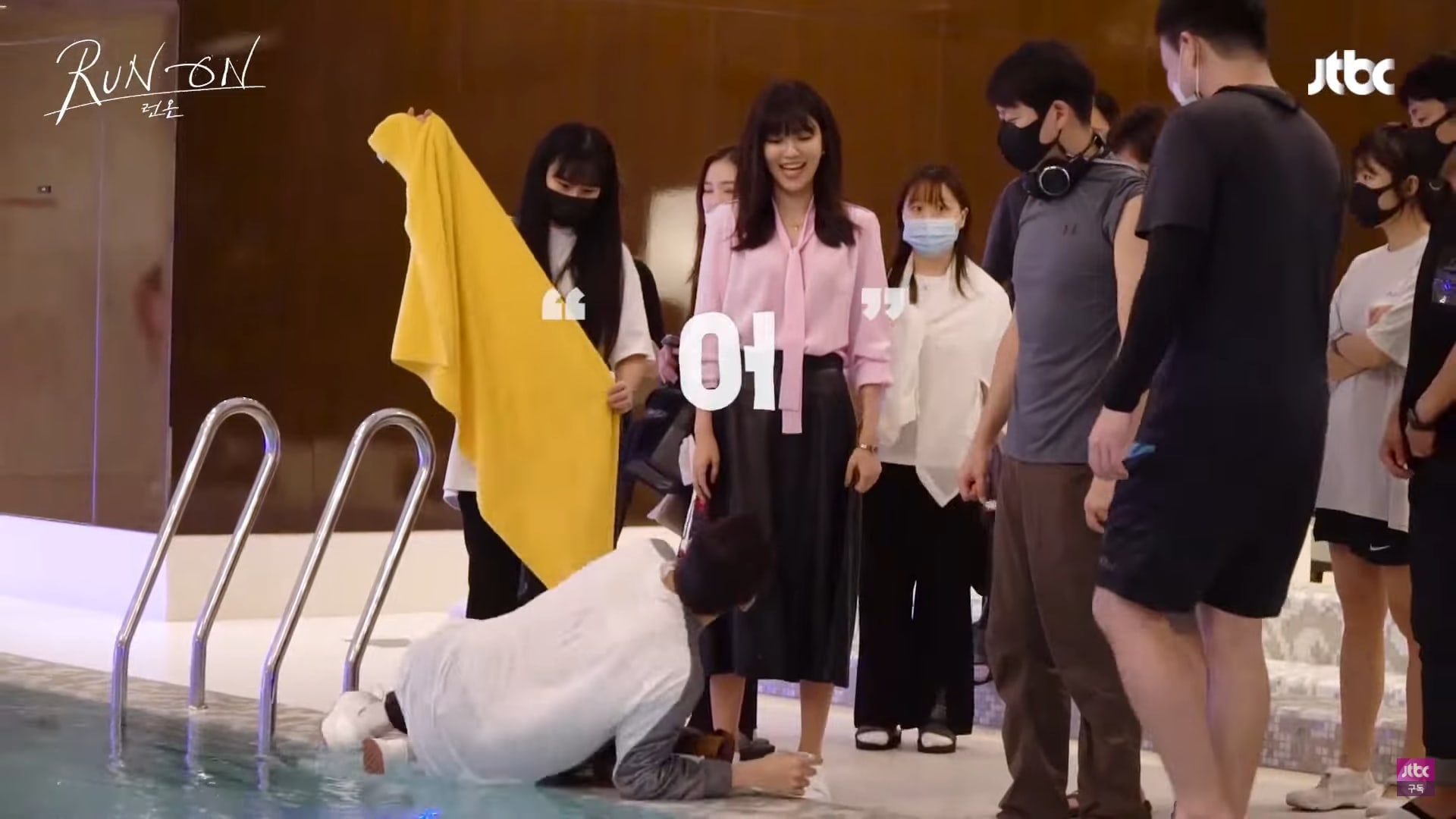 Next up, Kang Tae Oh must dive down to the bottom of the pool to retrieve a bracelet, but he has a difficult time locating it. Sooyoung claps in amusement when Kang Tae Oh comes up for air and gasps, “I can’t find it, it’s too hard!” The pair show off their superb acting skills as they carry out the next scene, and as soon as they finish, Sooyoung checks to make sure that Kang Tae Oh is okay.

Kang Tae Oh then dons a robe for the following scene. Sooyoung compliments the color, saying that it suits him well, as if it were made just for him. She stays in good humor as she talks to the staff about her character’s broken bracelet, saying, “It’s a shame since it cost 10 million won (approximately $9,100).” After she falls into character and acts upset about the bracelet, Kang Tae Oh attempts to appease her by making hearts with his fingers, but she just looks away in mock disgust. 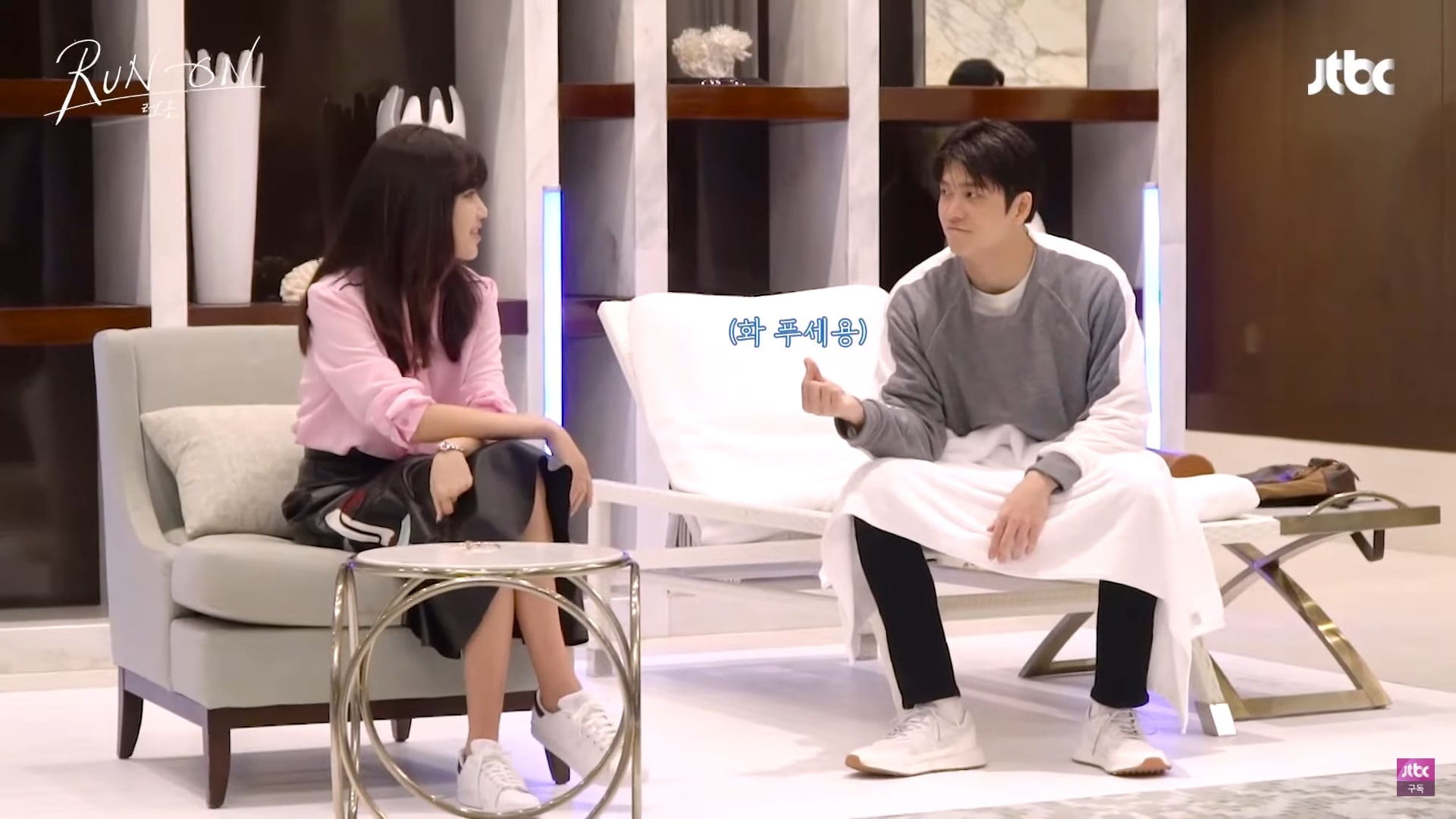 As they prepare to film, Kang Tae Oh jokes around by trying to make his hair wet again by putting his head into the pool, which surprises Sooyoung. Throughout the scene, Sooyoung continues to use all of her strength to fix the broken bracelet. Finally, she hands the bracelet to Kang Tae Oh, whose eyes widen when he accidentally drops it in the middle of the take. The video comes to an end as they film the scene once more and Sooyoung comes over to pat Kang Tae Oh’s back in congratulations.