On December 30, Park Hae Jin took home the Daesang at the 2020 MBC Drama Awards for his starring role in “Kkondae Intern.” After his win, the actor sat down for an interview with Ilgan Sports to talk about what it was like to receive the first Daesang of his 14-year career.

Repeatedly emphasizing his disbelief that he had won the awards, Park Hae Jin humbly remarked, “I didn’t do much, but I somehow ended up receiving a Daesang. I sent out texts to people saying, ‘I’m sorry that I was the one to receive it.’ During my life as an actor, I thought to myself, ‘Will I ever be able to win this kind of award?'”

“I think at least 50 percent of my winning this award was luck,” he continued. “40 percent was the strength of the drama itself, and I think I only contributed about 10 percent.”

The actor went on to confess, “When accepting awards, I’ve seen many people express that they feel burdened and say, ‘I don’t know if I deserve to win this award.’ Now I understand why they said that. Maybe because of the current situation, but rather than feeling pure joy upon receiving the award, I kept thinking, ‘What should I do? I’m in big trouble.’ I had a lot of mixed feelings.”

Describing his experience after his big night was over, Park Hae Jin shared, “After the award ceremony, I went right home, washed up, and went to sleep. I’d never seen so many congratulatory messages in my life. No matter how much I scrolled and scrolled, there were still new messages.” 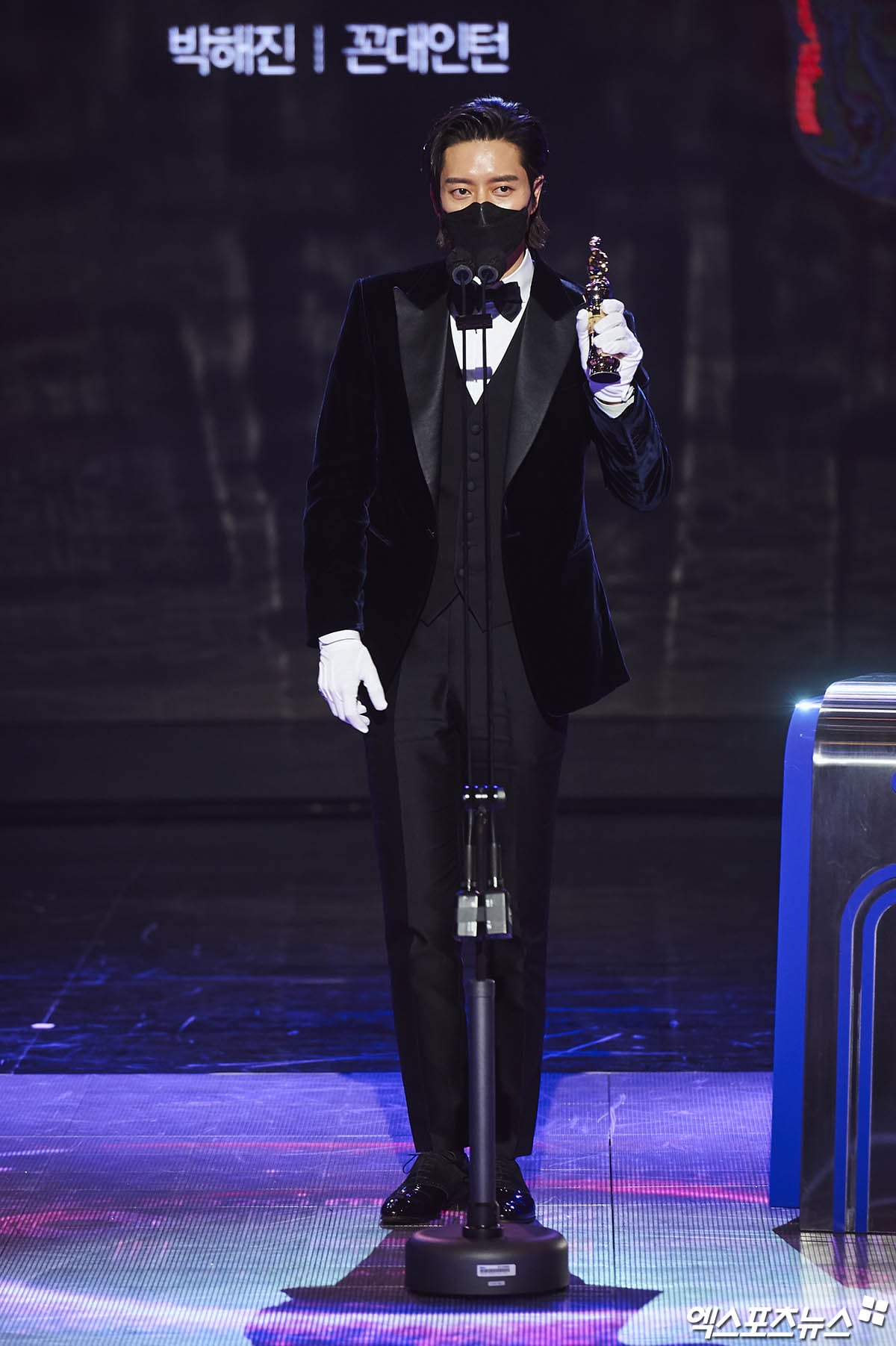 As for his role in “Kkondae Intern,” in which he played a man who finally gets sweet revenge on a former boss who once made his life miserable, Park Hae Jin commented, “It was a new challenge for me, and as an actor, I feel like it was a great character. But because of that, I struggled even more. I worked hard to try to blend into the drama without standing out, but to also appear three-dimensional at the same time.”

The actor couldn’t seem to say enough good things about the cast and crew of the drama, recalling, “Out of all my acting projects up until now, I was the happiest [while filming ‘Kkondae Intern’]. It was a gathering of people who were all truly kind to the bone, so there was never any trouble or conflict, and we wrapped up the drama nicely. There was really a lot of camaraderie, and the set was always overflowing with laughter.”

When asked about the possibility of a second season of the drama, Park Hae Jin replied, “I’m also in a position where I’m waiting to hear about it. Even if it isn’t ‘Kkondae Intern,’ I really want to work with this team again on another project no matter what.”

He went on to reveal, “For my next role, I’m currently in talks for a different project. I’m looking forward to greeting you with good things soon.”