Kim Hyun Joong is taking baby steps back into the spotlight.

On the episode of KBS Joy’s “Ask Us Anything Fortune Teller” that aired January 4, Kim Hyun Joong appeared as a guest and let the viewers in on how he has been doing for the past three years. Since this was his first variety show appearance in three years, he had a lot to cover. 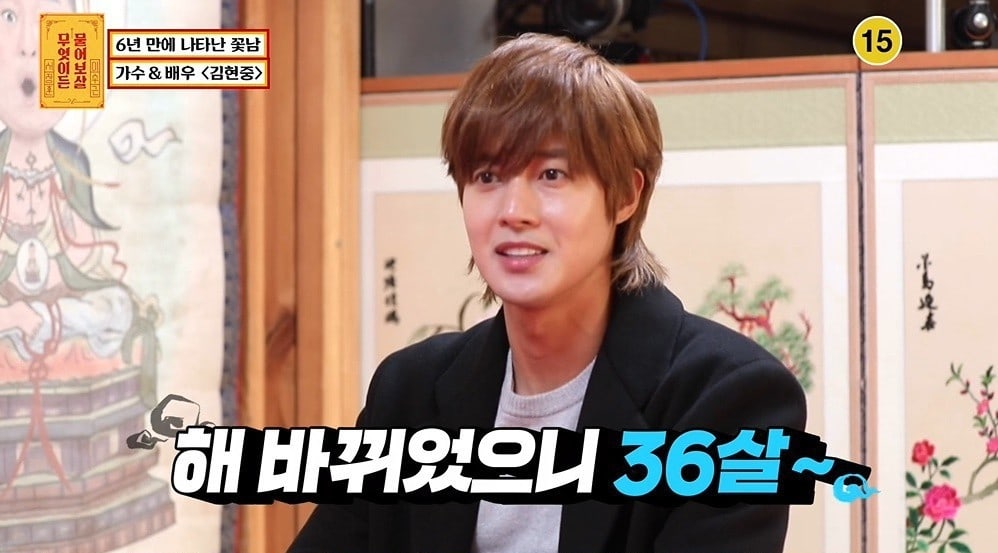 “Ask Us Anything Fortune Teller” is a show where guests bring in their worries and seek advice from the two hosts, Lee Soo Geun and Seo Jang Hoon. Kim Hyun Joong, who turned 36 this year in Korean age, shared his worry as well, stating, “In my every day life, I am very conscious of how others view me. I’m originally a bright person, but I keep feeling so small. How can I feel less dejected and live cheerfully?”

In response, Seo Jang Hoon commented that a lot of things happened for Kim Hyun Joong and asked when those incidents had occurred. This was in reference to the lawsuit Kim Hyun Joong was wrapped up in starting in 2014 involving his previous girlfriend. To Seo Jang Hoon’s question, he answered, “It was when I was 29, 30 years old. Five years ago.” Although his case was resolved last November, he has yet to return to the drama scene. His last drama was KBS W’s 2018 piece “When Time Stopped.”

Kim Hyun Joong went on to say, “Of course, I can’t say that I’m in the right. But I have the same dream every day. I get a little comfortable in front of family, but feel dispirited whenever I meet someone new. I feel like that person will judge me. I couldn’t bring myself to reach out to fellow celebrities. I felt like my existence in itself was a nuisance. I thought that there would be no good in them getting close to me.” 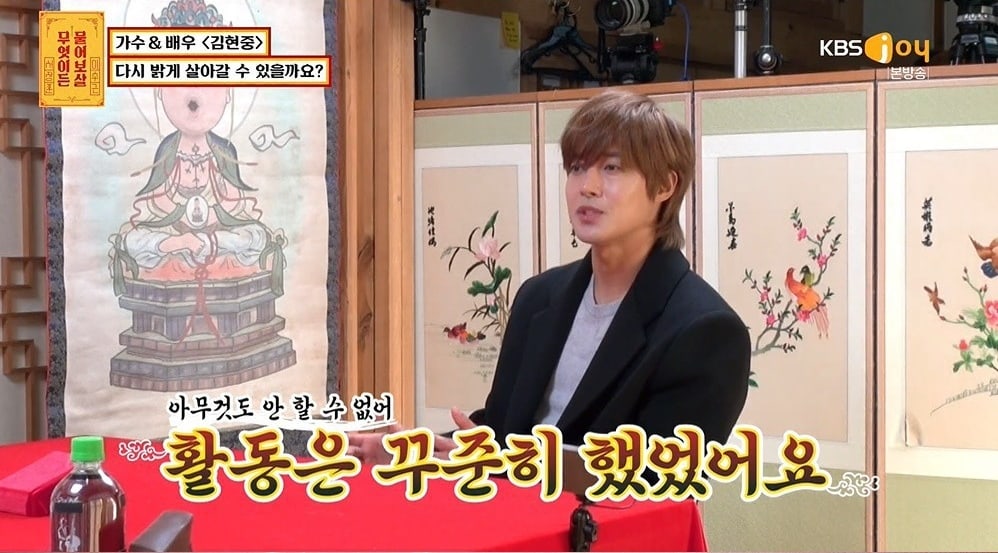 That is not to say that Kim Hyun Joong has been avoiding work altogether. He explained, “I have been working consistently. I couldn’t be too open about it so many people assume I haven’t been up to anything. Recently, my manager brought in the script for ‘Indian Pink,’ an independent film. At first, I rejected it. But the director said the role had to be played by me, and I was convinced. When I found myself in front of the camera, I welled up with emotions. I thought to myself, ‘This is what I’m good at, what have I been doing?’ I decided to give the piece my all because I felt like it was the last chance I was being given in life.” 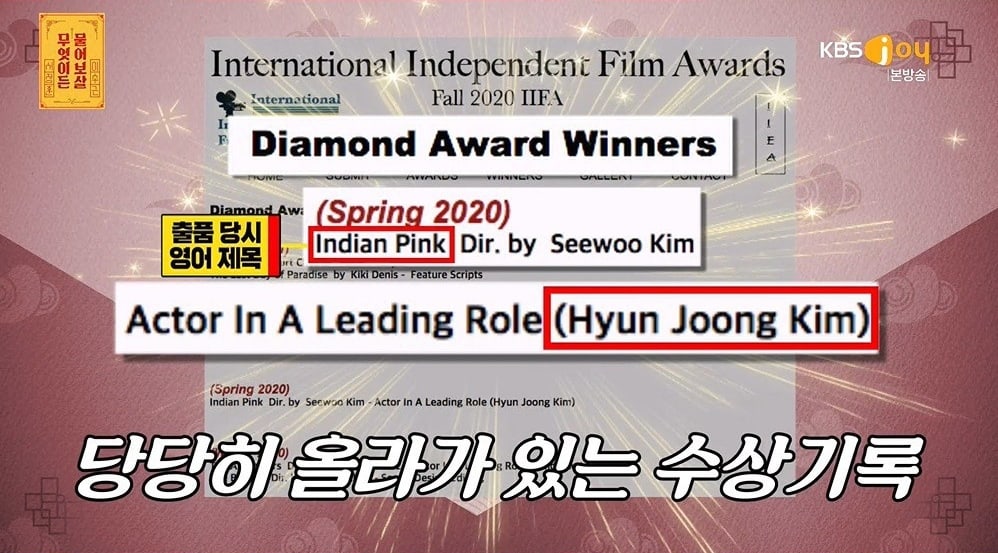 Kim Hyun Joong received an award at an American independent film festival for his performance. But he commented that no one paid it much thought.

Last August, the actor was in the news for saving a man’s life with first aid. He told the story from his point of view by saying, “While I was taking a break from work, I got into skin scuba diving. Because of that, I learned lifesaving skills. One day, I was on my way out from a restaurant with an acquaintance when I heard a loud thud from inside the restaurant. A man was on the floor, lying stiff. I performed CPR for three minutes, but there was no response. To be honest, I was so scared. I wondered if I had gotten myself involved in something I shouldn’t have. Because the man didn’t regain consciousness for such a long time, I even thought that I would be in trouble if something were to happen to him. It was a very selfish thought.”

He went on to say, “Luckily, the man woke up. I felt a little ashamed of myself, so I hurriedly left the scene. I was reached out to later on, but I tend to panic when I get calls one after another. So, I drank and went to bed. The next day, I woke up and saw my name on the list of most searched items. I couldn’t even bring myself to click on it. My company reached out to me and explained that the man had contacted a reporter.”

Thinking back on the incident, Kim Hyun Joong commented that it was a miraculous event. He also stated that some people started to reconsider his past case as a result of the incident and that he was inspired to rethink things and have courage to take charge of his life again. 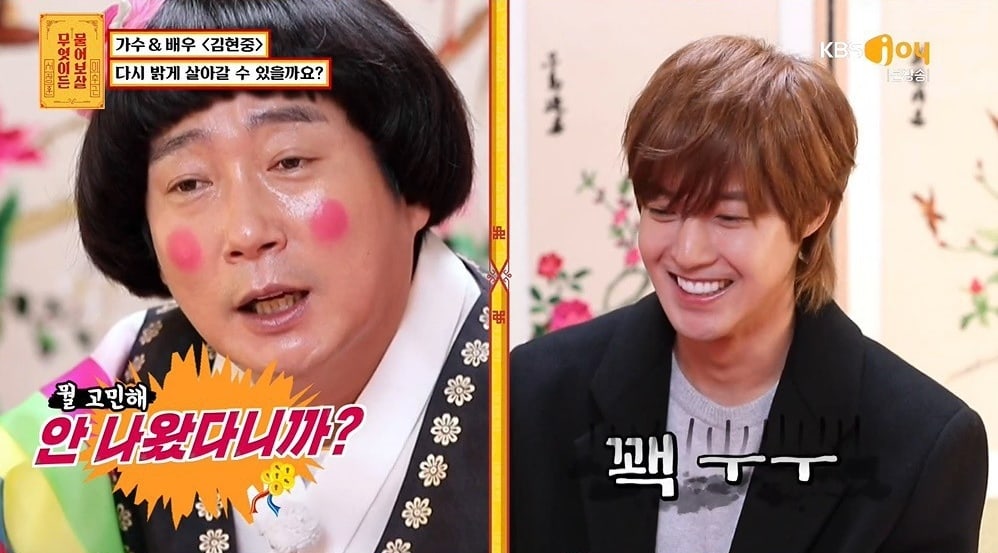 After hearing Kim Hyun Joong’s story, Seo Jang Hoon said, “You found great success right after you debuted at the age of 19 (Korean age). With your hand on your heart, think about this. Do you want to go back to those days?” Kim Hyun Joong promptly answered, “No.”

Lee Soo Geun added that there are times where it feels like everyone is criticizing you, but it is important to consider it all as advice. He explained that being the subject of the discussion is a result of one’s own mistake, and one must accept the consequences.

Seo Jang Hoon lastly advised, “You can’t erase your past and start anew. These things don’t get perfectly fixed. You just live with it.” 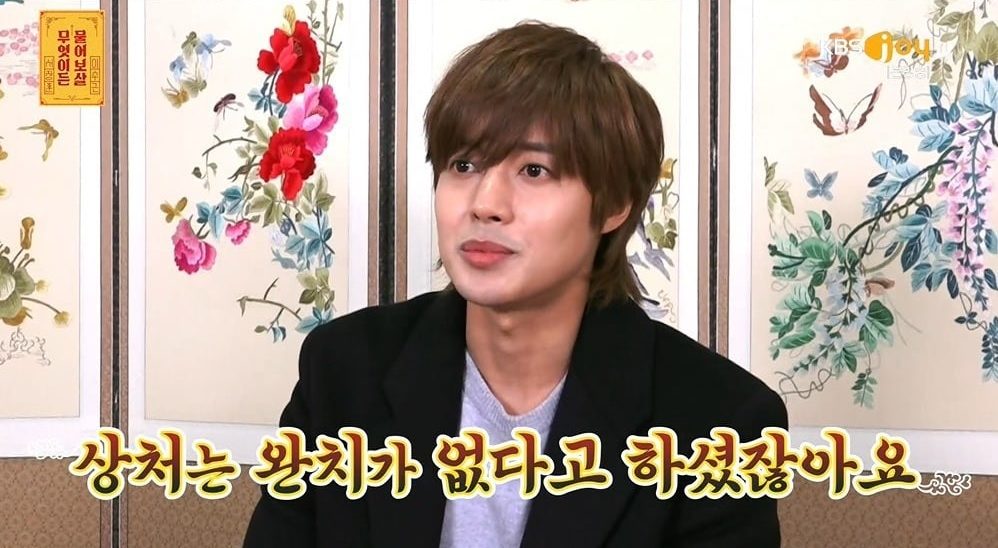 In the end, Kim Hyun Joong stated, “You said that there’s no complete cure to my hurt, but I think I was looking for a complete cure. Now, I think that I need to carry the hurt with me. This has been a small consolation.”

Watch Kim Hyun Joong in “When Time Stopped” below: