Several stars have made donations to help victims of child abuse and other children who are suffering, following public outrage over the death of the 16-month-old child Jungin due to suspected abuse.

It was recently shared that Lee Young Ae made a donation of 100 million won (approximately $91,500) to the Asan Medical Center for pediatric patients and also healthcare workers dealing with COVID-19.

The actress stated, “I decided to make the donation in the hope that the money could be used to help children like Jungin who, while ignored by society, are struggling and neglected or ill. I also hope that it will be even a bit of support for the healthcare workers who are engaging in the fight with COVID-19 while putting their own safety at risk.” Lee Young Ae’s agency also previously confirmed that she visited Jungin’s grave with her husband and children to pay tribute.

According to the Asan Medical Center, Lee Young Ae has donated a total of 350 million won (approximately $320,000) since 2006 to the Asan Foundation to help critically ill patients in need.

Simon Dominic made a donation of 50 million won (approximately $45,700) to ChildFund Korea, sharing a screenshot of the donation on his Instagram along with information about child abuse. He wrote in the caption, “Please show more interest and help so that children who are in pain and are injured can grow up safely and in good health.”

Yoo Byung Jae made a donation of 10 million won (approximately $9,100) to Gfoundation, also sharing information on his Instagram about child abuse and neglect. He wrote in the caption that he was supporting children who have been abused.

Famous lyricist Kim Ea Na made a donation of 10 million won to the Korea Child Abuse Prevention Association through the Gyeongnam Community Chest of Korea. She posted about her donation in her Instagram stories on January 8 and wrote that she is supporting those who are working hard for the cause. 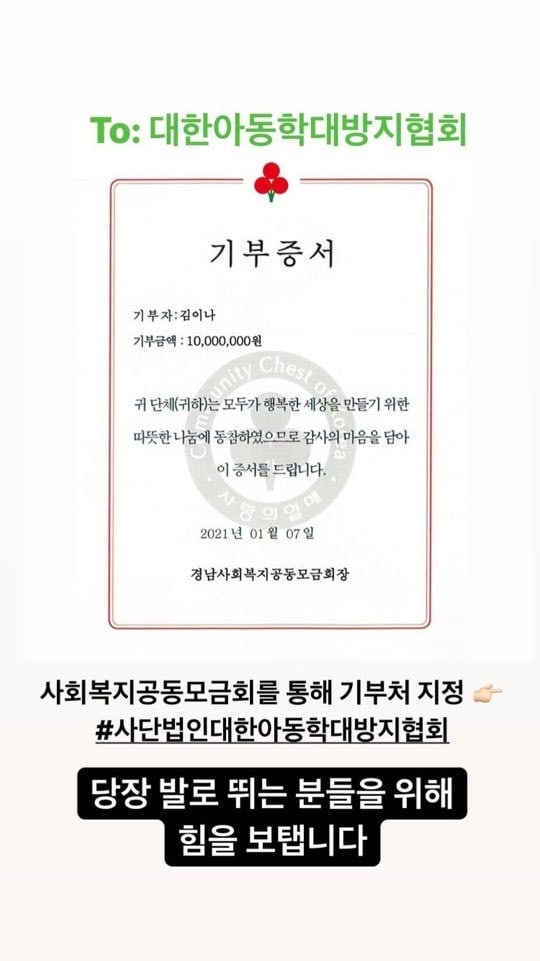 Model Jang Yoon Joo has donated 30 million won (approximately $27,400) to the non-governmental organization Hope Joyagdol. She stated, “Since I have a child, my heart ached even more over Jungin’s story. I hope that this will provide even a bit of help for abused and marginalized children.”