(G)I-DLE is back with a new album!

On January 11, the group held an online showcase to commemorate the release of their new mini album “I burn.”

The album, which marks their first comeback in five months since the release of “DUMDi DUMDi,” explores the various emotions one experiences after a breakup.

Soyeon introduced the album by saying, “We’re singers, and we’re also artists who write songs. Rather than conveying a concept, we put more thought into how to best convey the emotions. As a multinational group, we wanted to convey emotions, since feelings about breakups are universal. I hope that these emotions feel like a novel.” 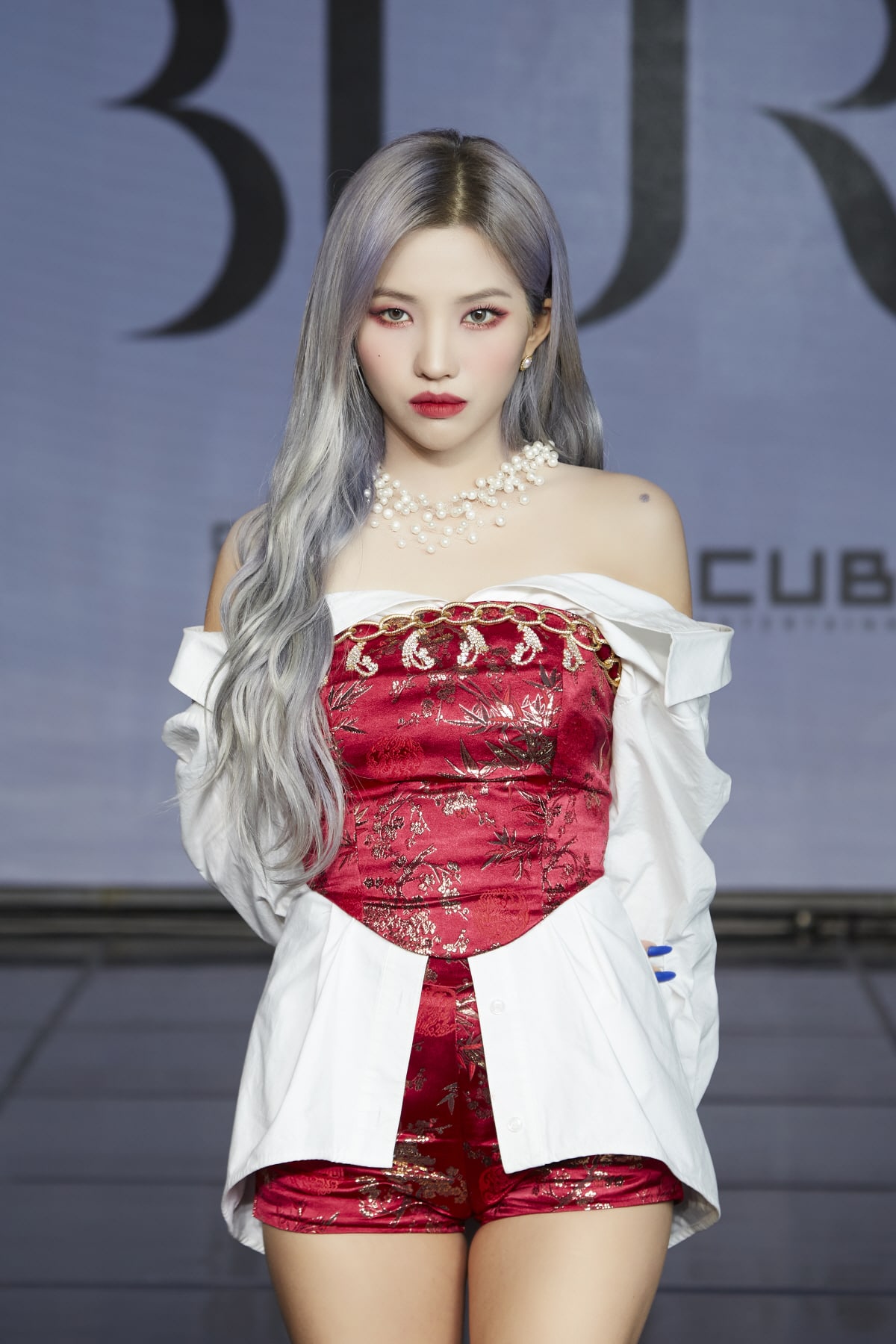 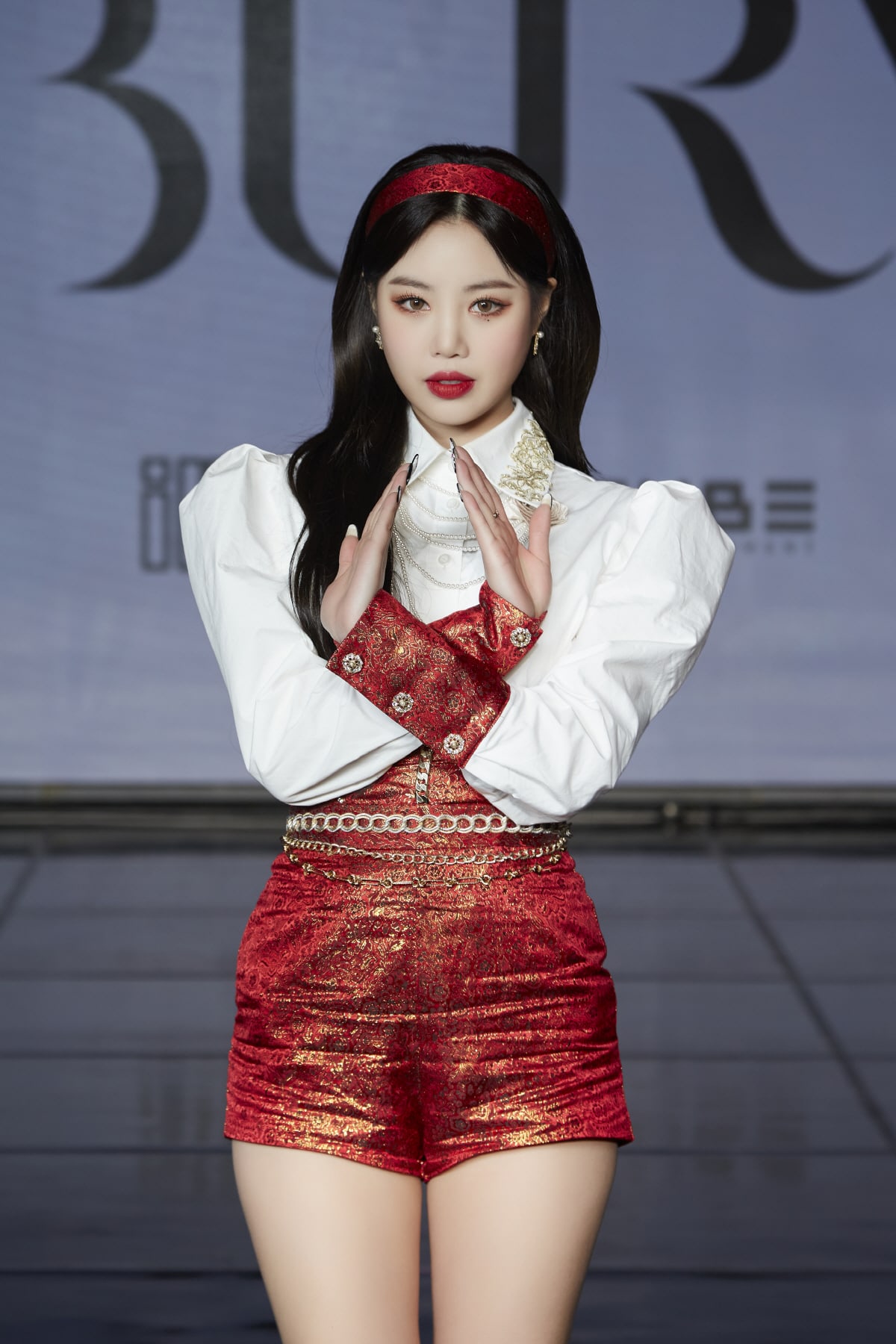 The album is filled with tracks that were produced by the members themselves, once again proving (G)I-DLE’s prowess as a self-producing group. Yuqi shared, “I’m happy that I was able to show through this album that I’m capable of composing songs. I’ll work hard to create a variety of tracks in the future.” Minnie added, “I infused my track with honest emotions that can’t be shown to anyone else. I’m really proud and excited to have one of my songs included on a Korean album for the first time in a while.”

Soyeon wrote the lyrics and co-composed the music for “HWAA,” the album’s title track with a catchy hook and traditional Asian instrumentation. She commented, “The track includes both meanings of the word ‘hwa‘—fire and flower—to express how both flames and blossoms can bloom on a frozen night.” Following up with an explanation of the three symbols present in the album, she explained, “Winter represents the frozen cold emotions following a breakup, and fire represents the desire to melt those feelings. The flower represents the cold but beautiful love that follows a breakup.”

Yuqi, who surprised everyone with her short hairstyle, shared a story about how she decided to cut her hair. “It’s my first time having short hair, so it was a big change for me as well,” she revealed. “I wore a wig at first, but I thought it made me look like a mushroom, so I ended up just actually cutting my hair. The style looked a lot more natural afterwards.” She went on to note that she wore a wig during filming for their teasers and music video. 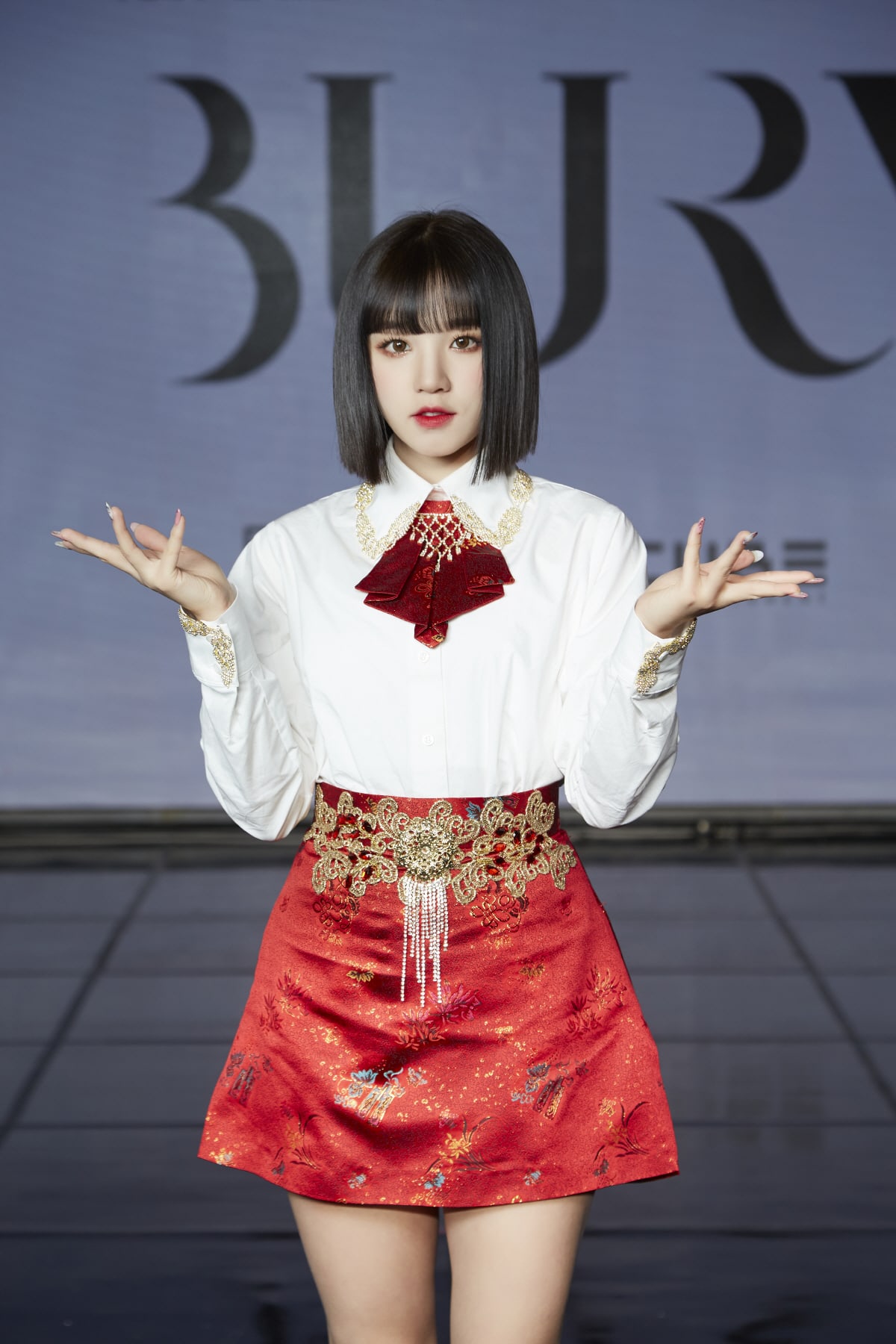 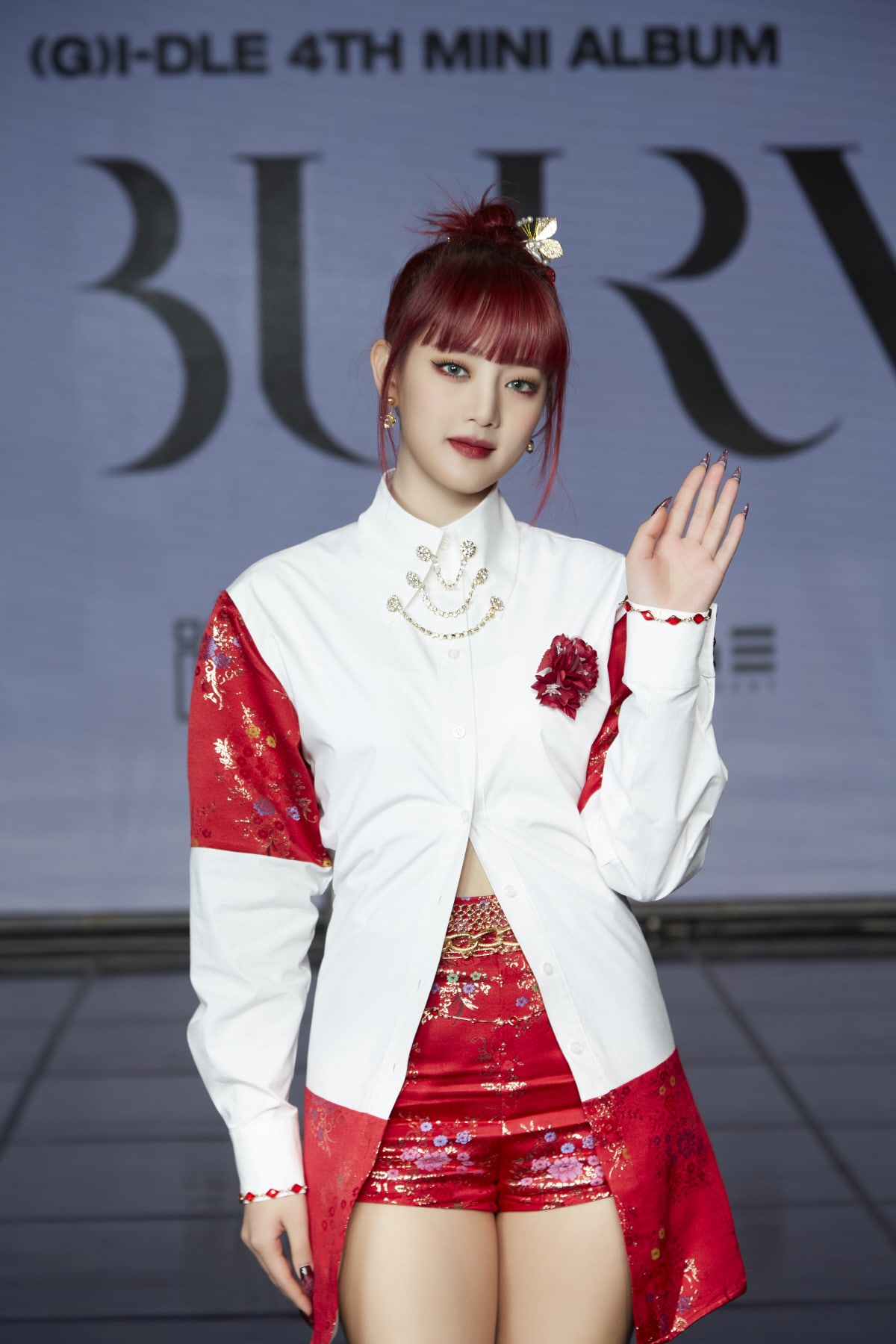 Soyeon revealed the group’s goal for the album, saying, “I want to reach No. 1 on the digital charts.” Expressing her desire to connect with their fans all around the world, Shuhua said, “I want to hear our fans’ cheers in person. I want to meet our fans both in Korea and overseas, and I want to have a concert [where the fans] are together with us in one space.”

Minnie remarked, “We’ve finally made a comeback in 2021. We worked especially hard on this album, so I hope everyone will enjoy it. Please spend this winter together with (G)I-DLE.” Yuqi added, “It’s been getting colder. Although this album gives off a cold feeling, it’s also full of flames. I hope you love it a lot.”

Miyeon commented, “We held onto the title track ‘HWAA’ for almost a year. I’m really happy now that it’s finally been released.” Finally, Soojin concluded, “Please listen to it a lot, and I hope you look forward to our performances as well.”

If you haven’t already, check out the music video for “HWAA” here! 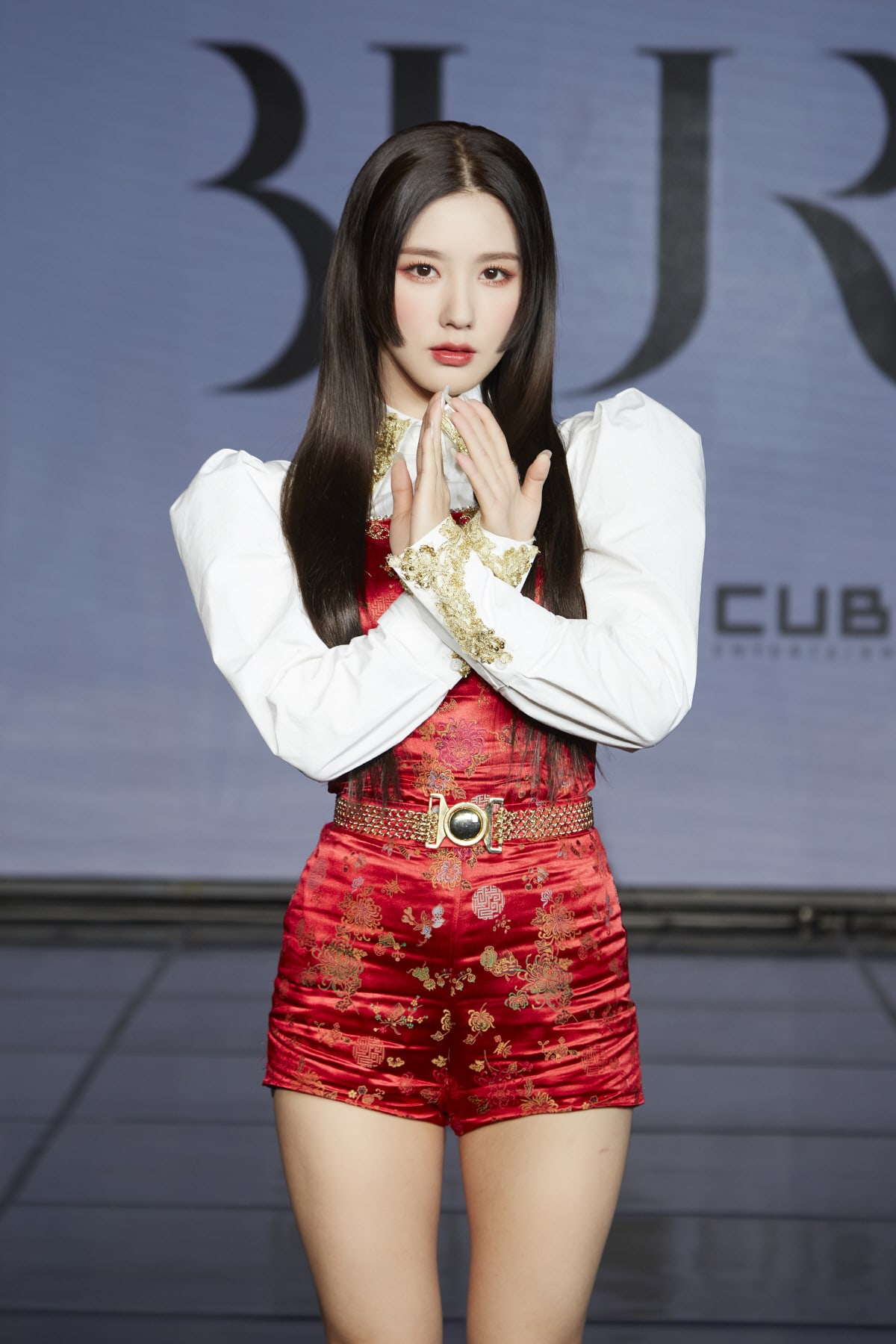 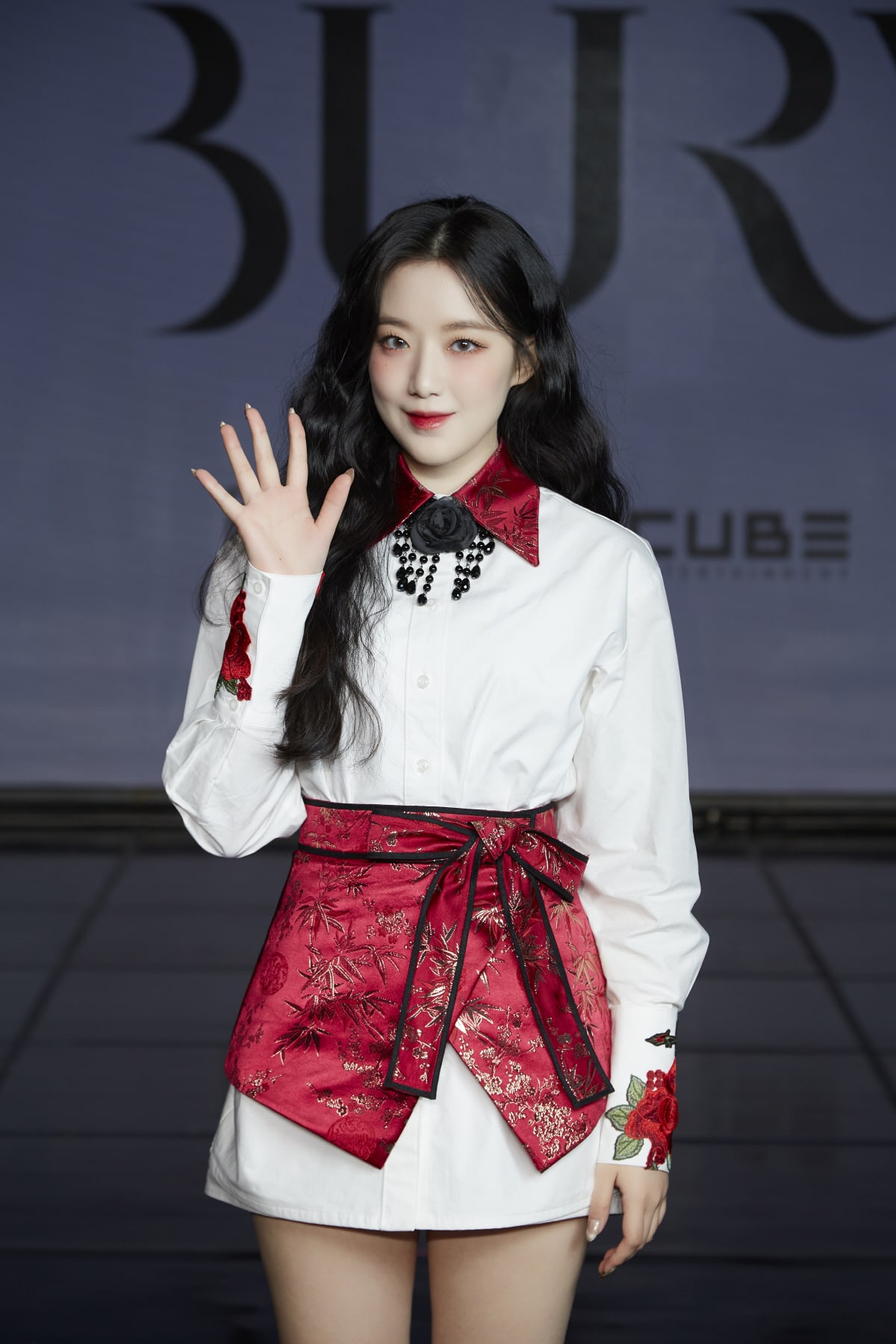