BTS and Baek Jong Won will be collaborating together!

On the January 14 broadcast of “Delicious Rendezvous,” Baek Jong Won successfully guessed the title of BTS’s hit song “Dynamite” and even named all the members. With a proud smile, he commented, “Jin and J-Hope appeared on ‘Baek Jong Won’s Top 3 Chef King.'” Then he connected with them through a video call and promised to cook for them. The members said, “See you on the show,” and the caption below hinted Baek Jong Won will be meeting BTS soon. 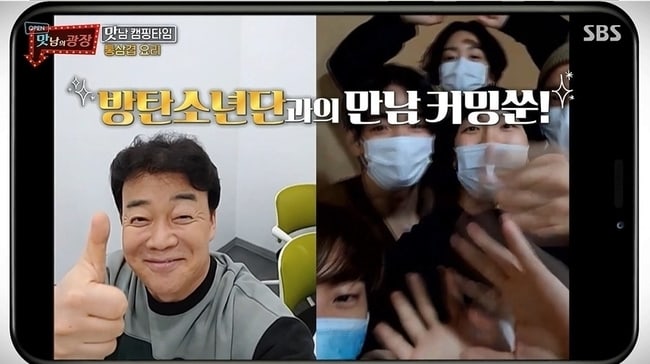 Producing director (PD) Lee Kwan Won of the variety show explained, “Baek Jong Won personally suggested calling BTS and asking them to appear on the show. Our program’s goal is to promote consumption of agricultural and marine products. After thinking about ways to promote it more effectively, we wanted to promote Korean food to both domestic and overseas consumers, so we started a collaboration with BTS, a representative of Korea.”

He added, “It will be an episode on BTS’s ‘Run BTS!’ that deals with Korean pork. Baek Jong Won will visit the web series this month to cook with the members. Please look forward to this collaboration as it is a meeting between great stars.”

Are you excited for the collaboration?

In the meantime, watch “Delicious Rendezvous” below: