With only the final episode remaining, the main cast of TV Chosun’s “The Goddess of Revenge” have named their most memorable scenes in the drama!

“The Goddess of Revenge” is a suspenseful revenge drama starring Kim Sa Rang as Kang Hae Ra, a woman who married into power and influence, but whose life was ruined in an instant when she was framed in a false scandal. She eventually joins forces with Cha Min Joon (Yoon Hyun Min), a brilliant but cold-hearted lawyer who is determined to avenge his family, in order to exact revenge on those who prey on the weak and vulnerable.

First, Kim Sa Rang chose the scene from the 10th episode where her character Kang Hae Ra faces her son Lee Ga On (Jung Hyun Joon) in Kim Sang Goo’s (Jung Man Sik’s) house after he returns from Canada. In the scene, mother and son share a tearful hug, and afterwards Kang Hae Ra explains to him why he has to stay at his father’s house. Kim Sa Rang explained, “While filming the scene, I became choked up with emotions because all of the pain and longing that the pair felt during their time apart came crashing down at once. I felt sadness and pity when I thought of Lee Ga On’s maturity.”

Yoon Hyun Min selected the scene in episode 9 where his character drops everything and rushes to the hospital after hearing news of Kang Hae Ra’s car accident, growing relieved once he makes sure that she’s okay. Yoon Hyun Min shared, “I worried a lot about how to express Cha Min Joon’s complicated emotions as he looks at Kang Hae Ra lying in the hospital bed and wavers between revenge and sympathy. I chose this scene since I think I was able to express well his confused feelings for Kang Hae Ra as well as his anger and sadness.” 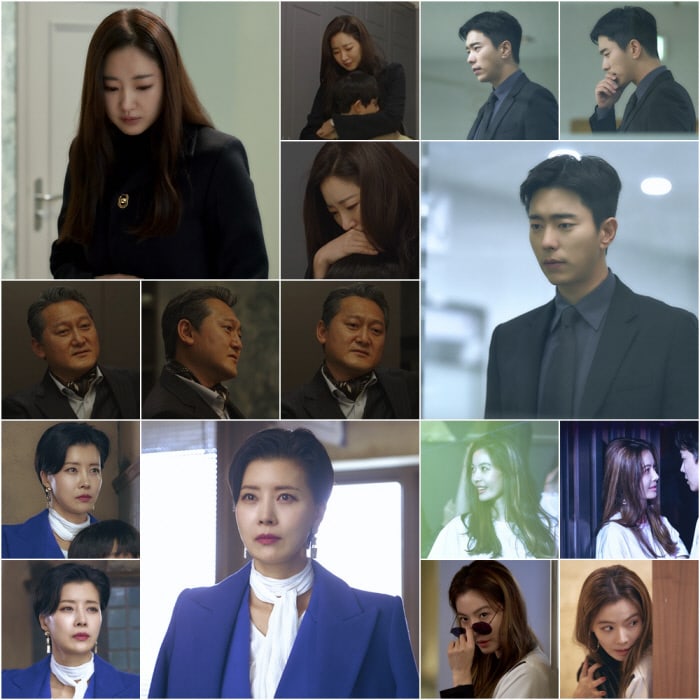 Next, Yoo Sun named a tense scene from episode 11 where her character grasps Lee Ga On by the shoulders and tacitly warns Kang Hae Ra that he would be hurt if she tries to attack her when Cha Min Joon and Kim Sang Goo walk in, prompting her to let out a dark and strange laugh. Yoo Sun explained, “I think it’s a scene where all of the tension from each character’s hidden intentions clashes together. Since the scene ends with Kim Tae On’s laugh, the director asked me to draw it out, so I worried about how it would turn out. Thankfully, the ending was edited well and many people got chills from the scene, so I knew that what the director had requested was right.”

Jung Man Sik selected the scene in episode 10 where Cha Min Joon asks his character Kim Sang Goo why he only just found out that he was the father to Cha Yi Hyun’s (Park Eun Hye‘s) son. Describing the hidden intention of the scene, Jung Man Sik said, “Kim Sang Goo wanted to fool the viewers into thinking that what he had with Cha Yi Hyun was romance and not a sponsor scandal. Although the lines weren’t very melodramatic, I wanted to convey them with that nuance.”

Finally, Yoon Soy chose a scene from the beginning of the drama where her character Goo Eun Hye sets out to complete Kang Hae Ra’s request by installing spy cameras in her husband’s hotel and revealing the truth behind his secret mistress Kim Tae On. Yoon Soy shared, “Goo Eun Hye is a quick thinker and full of wit, so I worked hard to show that irresistible side of her in a visual way. I selected these scenes since I think they show Goo Eun Hye’s charm to its fullest extent.”

The drama’s production team commented, “Every scene in the drama could be considered as a memorable one, and we want to extend our gratitude to the actors who gave their all to the production with their extraordinary passion and tremendous acting skills. We ask for your continued interest in ‘The Goddess of Revenge,’ which will be unpredictable to the very end.”

The final episode of “The Goddess of Revenge” airs on January 17 at 9 p.m. KST.