Kim Seon Ho’s father personally selected a member to “stand in” for him on the latest episode of “2 Days & 1 Night Season 4”!

The January 17 broadcast of the KBS 2TV variety show featured the cast members making their own wishes come true, and Kim Seon Ho’s wish was to go fishing with his dad. However, since his father couldn’t make it, one of the other “2 Days & 1 Night” members had to take his dad’s place as his fishing buddy.

To decide which member would accompany him, Kim Seon Ho made a phone call to his dad on the spot. After exchanging greetings with Kim Seon Ho’s father over the phone, Kim Jong Min asked him, “Seon Ho’s popularity is skyrocketing these days. How do you feel right now?”

Kim Seon Ho’s dad replied, “I’m happy, but I’m also worried.” When asked why, he explained, “Since [Seon Ho] is now bearing a heavier burden, he has to be careful not to drop it.” 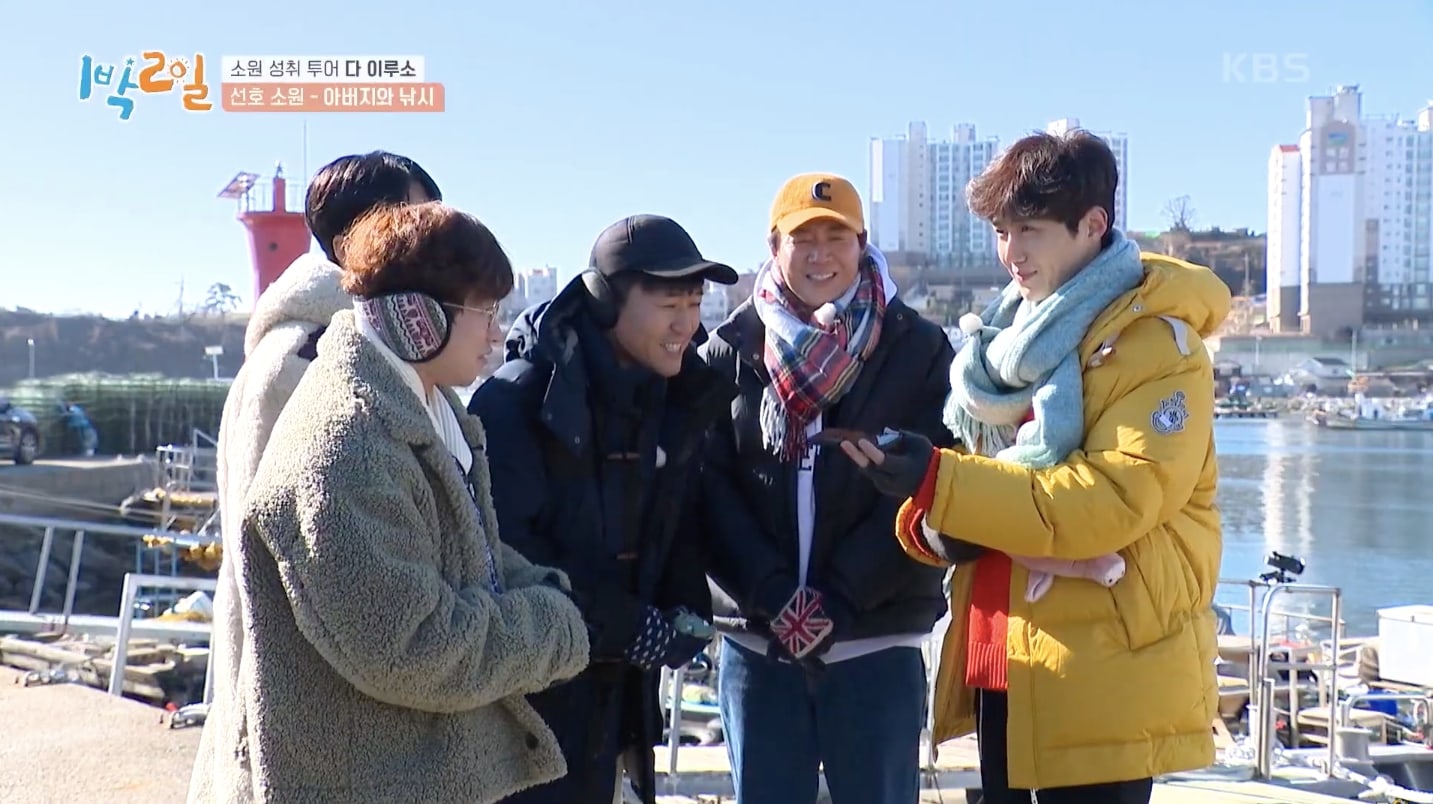 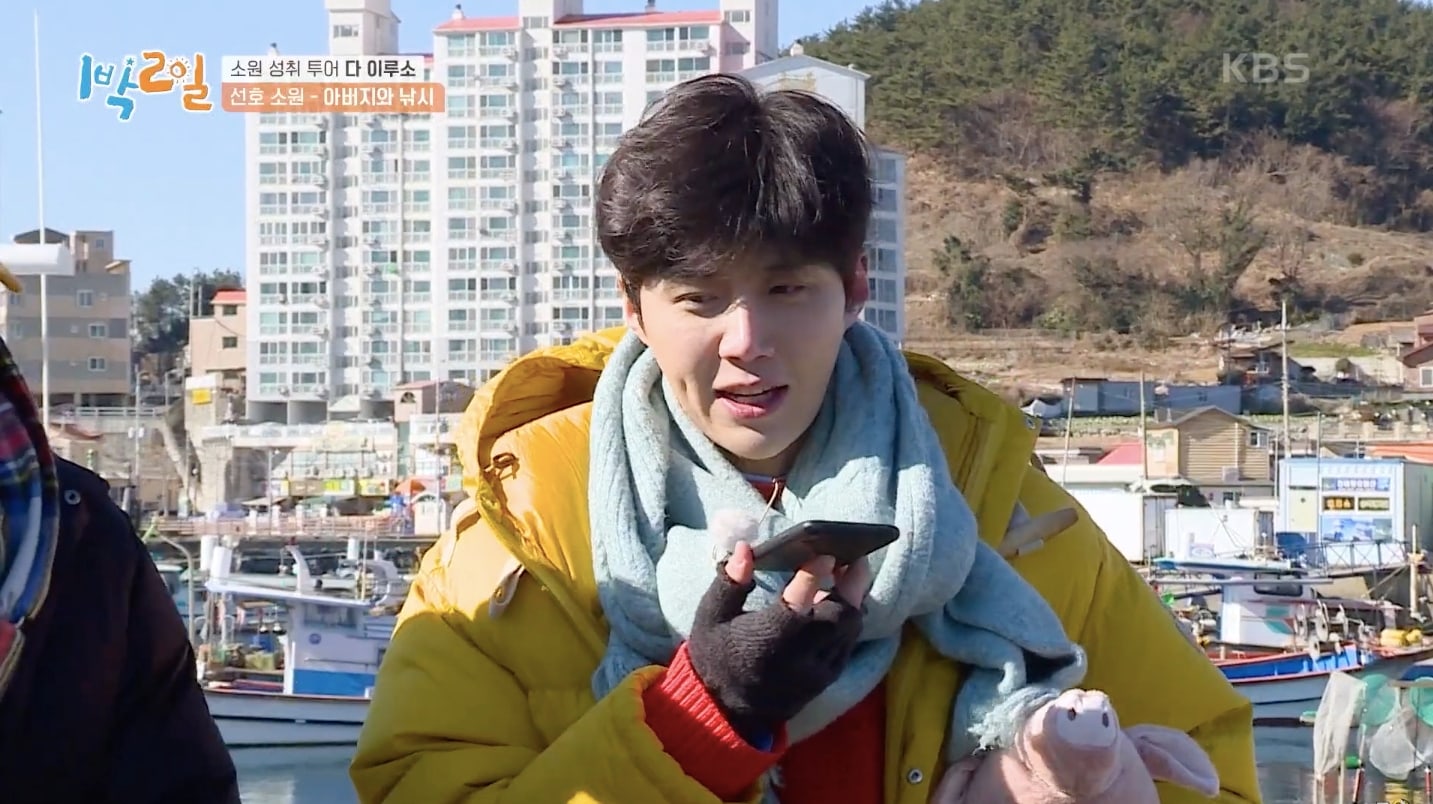 DinDin then asked if Kim Seon Ho’s dad watched “2 Days & 1 Night,” to which he replied, “I never miss a single episode.” DinDin followed up by asking him to choose his favorite member aside from his son, and Kim Seon Ho laughed, “My dad won’t be able to choose. He’ll never be able to choose one member, because he’d be afraid of hurting someone’s feelings.”

The actor turned out to be right: after a heavy sigh, Kim Seon Ho’s dad said, “I like all the members, so how can I choose? This is like torture.”

Finally, Kim Seon Ho asked his dad outright to pick a member to take his place on that day’s fishing trip. To help him make his decision, each of the cast members went on to take turns talking to him over the phone.

As the fishing trip would take several hours and the weather was extremely cold, the “2 Days & 1 Night” members were not exactly keen to be chosen—a fact that they hilariously made no attempt to hide as they talked to Kim Seon Ho’s dad.

Clearly doing his utmost not to be selected, DinDin pointed out, “Boats are dangerous, and if Seon Ho and I start bickering on a boat, it could be dangerous.” In a blatant attempt at bribery, he then promised to send him some premium Korean-raised beef, prompting Kim Seon Ho to exclaim, “You better keep that promise! My dad loves Korean beef.”

VIXX’s Ravi went with flattery, saying, “Thanks to your son Seon Ho, the citizens of South Korea are really happy now. He’s warmed their hearts and filled them with love.” He then brought up his past bad experience on a boat, hinting that he had already suffered enough. 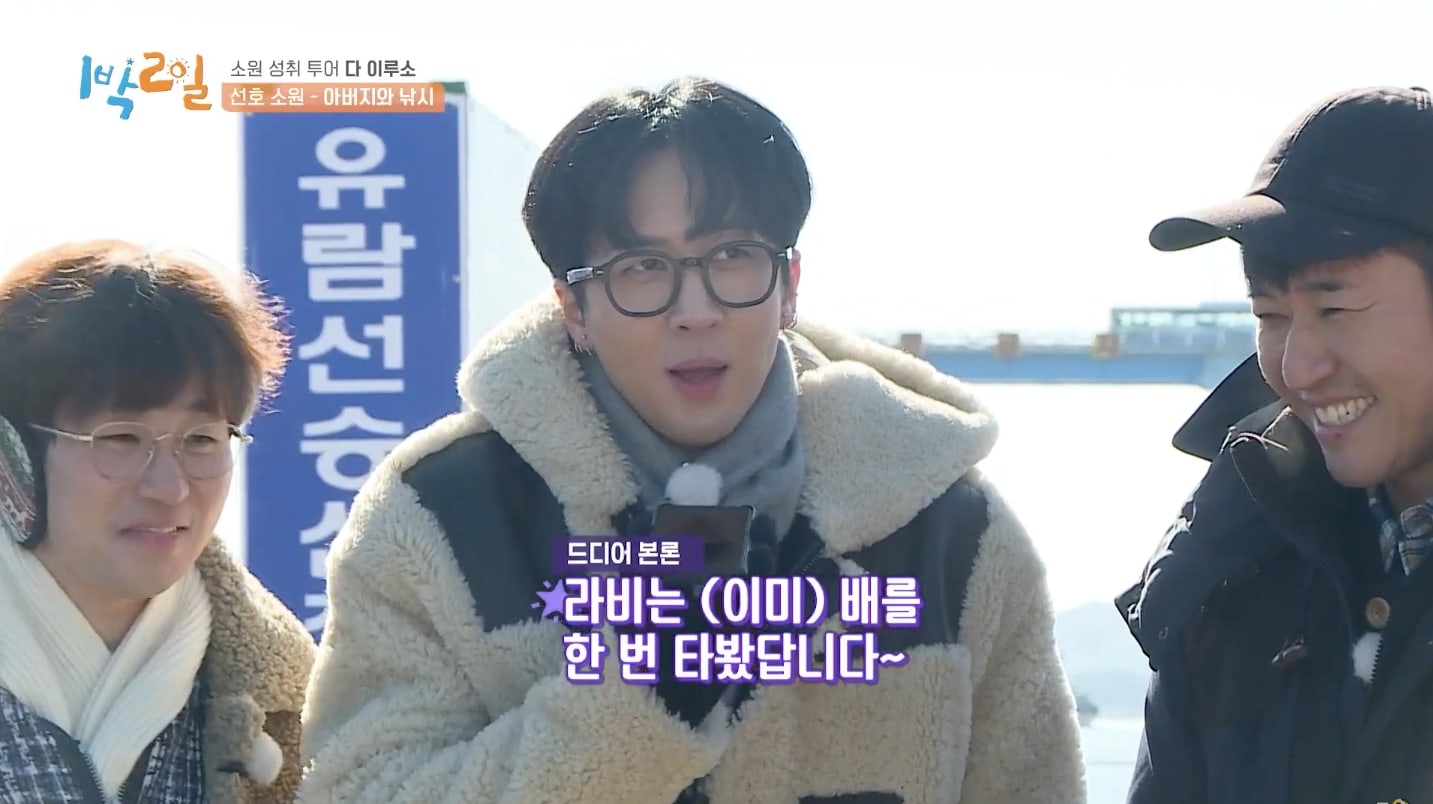 Kim Seon Ho’s dad audibly perked up when Kim Jong Min came on the phone, making the star nervous as the other members exclaimed, “He’s definitely going to go with Jong Min.”

Forgoing subtlety, Kim Jong Min cracked everyone up by declaring, “While filming ‘2 Days & 1 Night’ for a long time, my health has really deteriorated.”

Finally, Yeon Jung Hoon encouraged Kim Seon Ho’s dad to pick Kim Jong Min by remarking, “In order to get a lot of screen time [on the show], it’s usually good to be with Jong Min. If [Seon Ho] goes with me, all he’ll get is the fish we catch.” 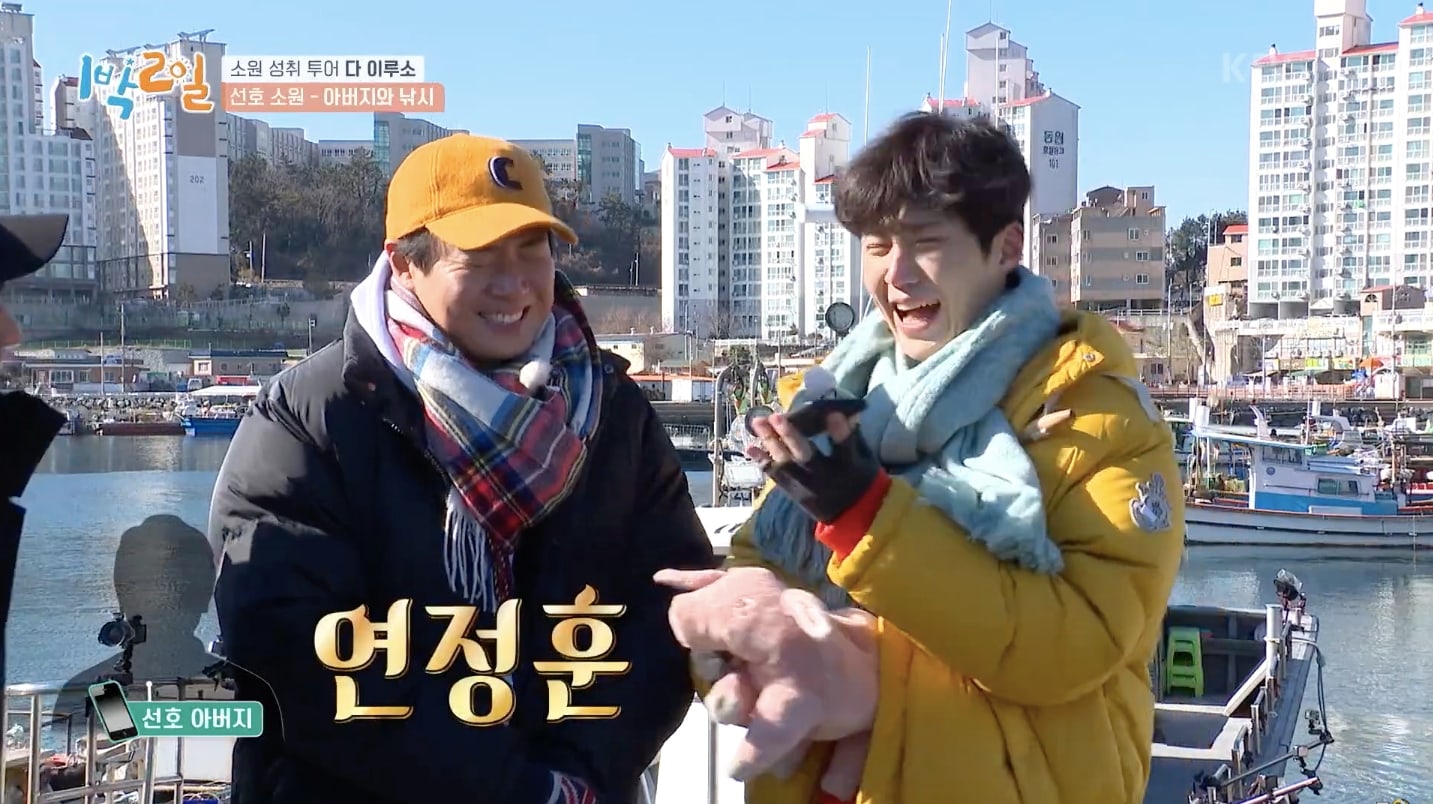 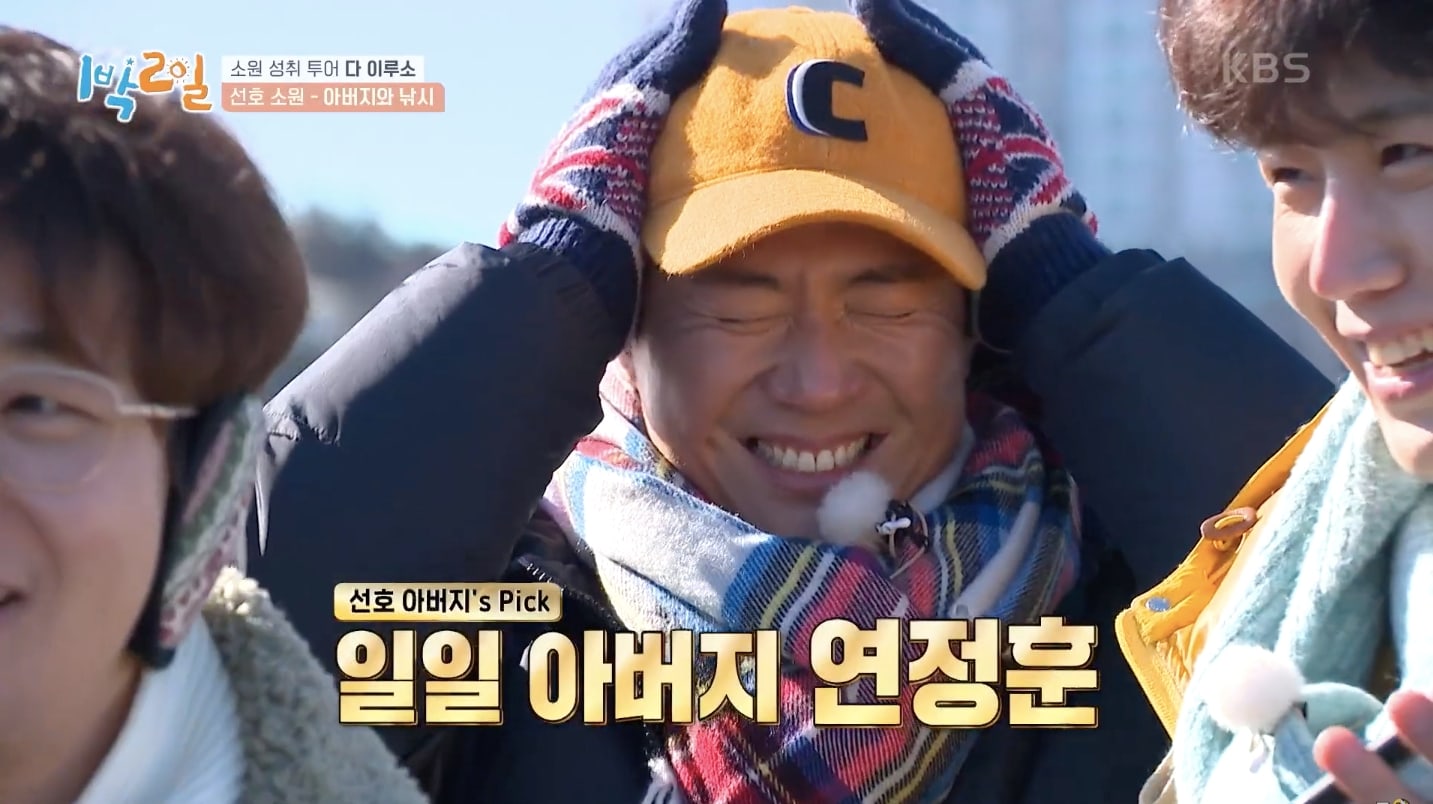 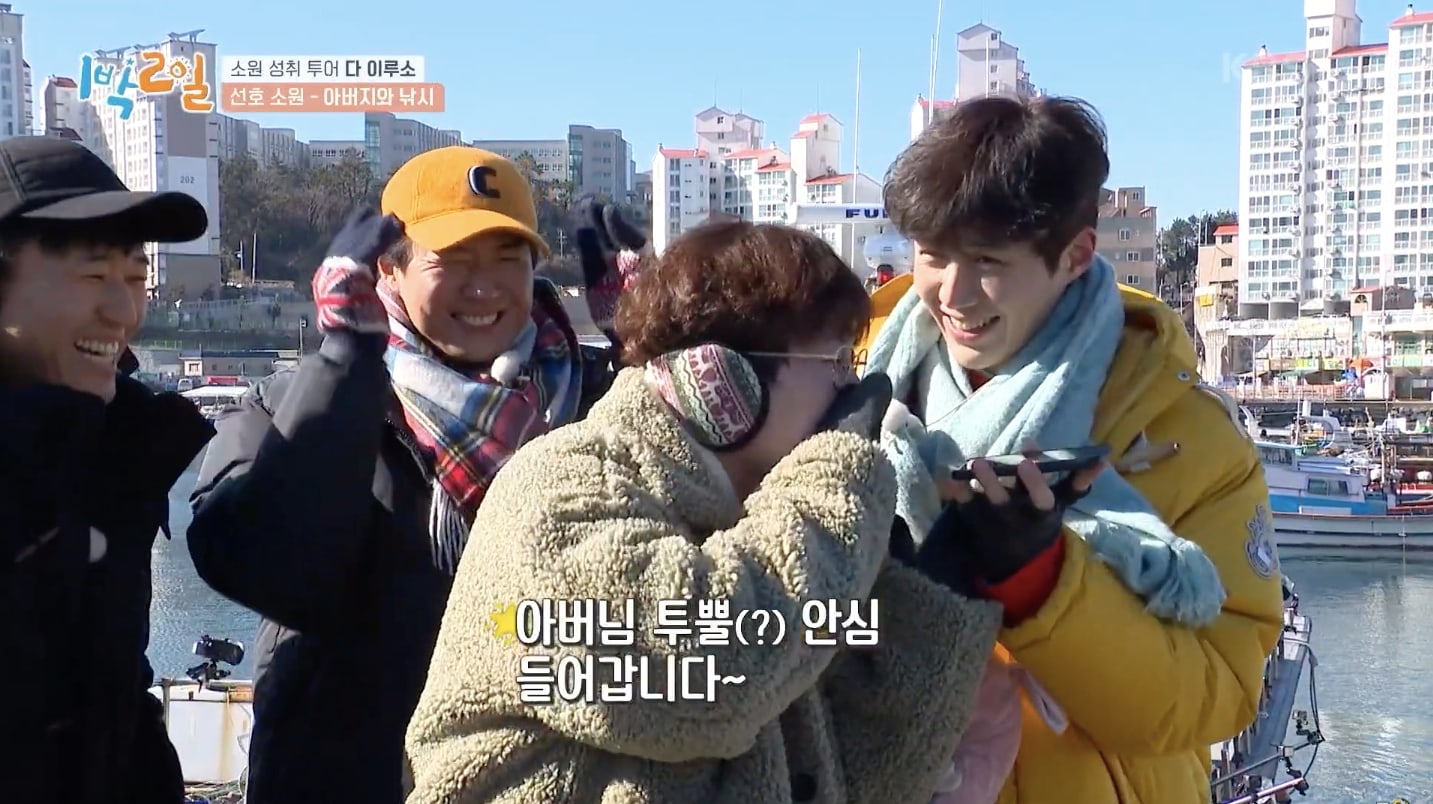 After hanging up, Kim Seon Ho explained, “In my father’s eyes, [Yeon] Jung Hoon is someone who’s good at everything.”