The suspense-ridden story of “The Goddess of Revenge” has come to an end! 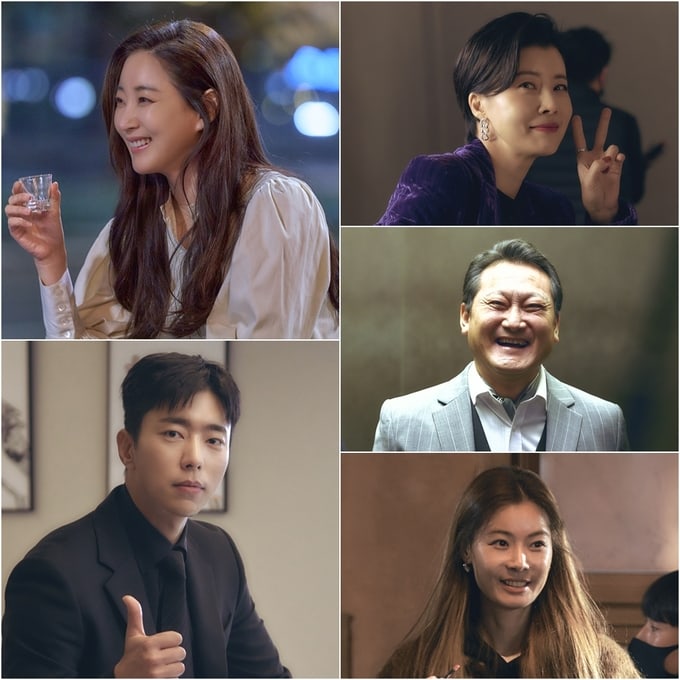 First, the five expressed their gratitude towards the director, writer, staff members, and of course the viewers that stuck with them.

Kim Sa Rang took on the role of Kang Hae Ra, a character that delivered a refreshing revenge to those that prey on the weak. She commented, “I feel very attached to this piece because of the director and staff members that endured through seven months of COVID-19 and the severe weather conditions of summer and winter. We all stuck together and depended on one another. I hope that our drama was able to energize everyone going through a tough time. Although we couldn’t touch upon all issues, I hope that Kang Hae Ra’s revenge was a refreshing one for viewers. I will continue to work on being an actress who serves as a source of strength for viewers. Thank you so much.”

Yoon Hyun Min, who played a cold-hearted lawyer with a hidden soft side named Cha Min Joon, shared, “It was a happy experience because I got to work with good people during hard times. I want to say thank you to the director and writer for gifting me the character of Cha Min Joon, to the staff members for staying dedicated despite the cold and tough environment, and to the fellow actors for working hard on making this piece a good one. Above all, I want to thank all of you for supporting us with encouragement. I will repay the love by working on my craft as an actor.”

Yoo Sun, who played the ambitious Kim Tae On, remarked, “I am thankful that all of our team members completed the project safely amidst the restrictions due to COVID-19. I want to thank our viewers for supporting us to the end.”

Jung Man Sik, who played Kim Tae On’s father Kim Sang Goo, stated, “There’s always a sense of regret that follows the closure of a project. This is especially the case with ‘The Goddess of Revenge’ because it was my first time putting forth an elderly role. I feel that I could have been more expressive in the intricate details. I want to send my genuine gratitude and commendation to the director, writer, film crew, and especially the special effects team that spent two hours on transforming me into Kim Sang Goo every time.”

Yoon Soy, who played the talented detective Goo Eun Hye, said, “I spent such a great time with our beautiful team that saying goodbye is too sad. I am filled with gratitude to the director and writer for gifting such a great piece and to our staff and cast members for putting in their absolute best in everything we did. I think ‘The Goddess of Revenge’ will be a project that stays with me for a very long time. I also want to sincerely thank those who viewed ‘The Goddess of Revenge’ and sent us their endless support and love.”

The production team commented, “‘The Goddess of Revenge’ was possible because of the actors’ passionate performances, the staff members’ passion, and the viewers’ interest.”

Congratulations to “The Goddess of Revenge” for successfully wrapping up the series!