Watch: “The Penthouse” Cast Takes Care Of Each Other In Behind-The-Scenes Video

“The Penthouse” cast shows their consideration for each other and friendship in a new making-of video!

The show is set in a 100-floor luxury penthouse apartment, and the first season featured three women at the heart of the tale: the “queen” of the penthouse Shim Soo Ryeon (Lee Ji Ah), the “prima donna” Cheon Seo Jin (Kim So Yeon) who will stop at nothing to get what she wants, and Oh Yoon Hee (Eugene) who will do anything it takes to get into the world of high society. It was recently confirmed that the drama’s next season will premiere on February 19.

A new behind-the-scenes video gives another look at what happened on set while shooting the first season. As they film the family dinner scene in episode 6, Yoon Jong Hoon (as Ha Yoon Cheol) has to get up to leave the table first. While getting into place, someone off camera comments that Yoon Jong Hoon is quite tall. He laughs and says he’s not really, but he asks if he should spread his legs out wide when he’s standing. To get a better shot, he ends up doing that before he leaves the scene. 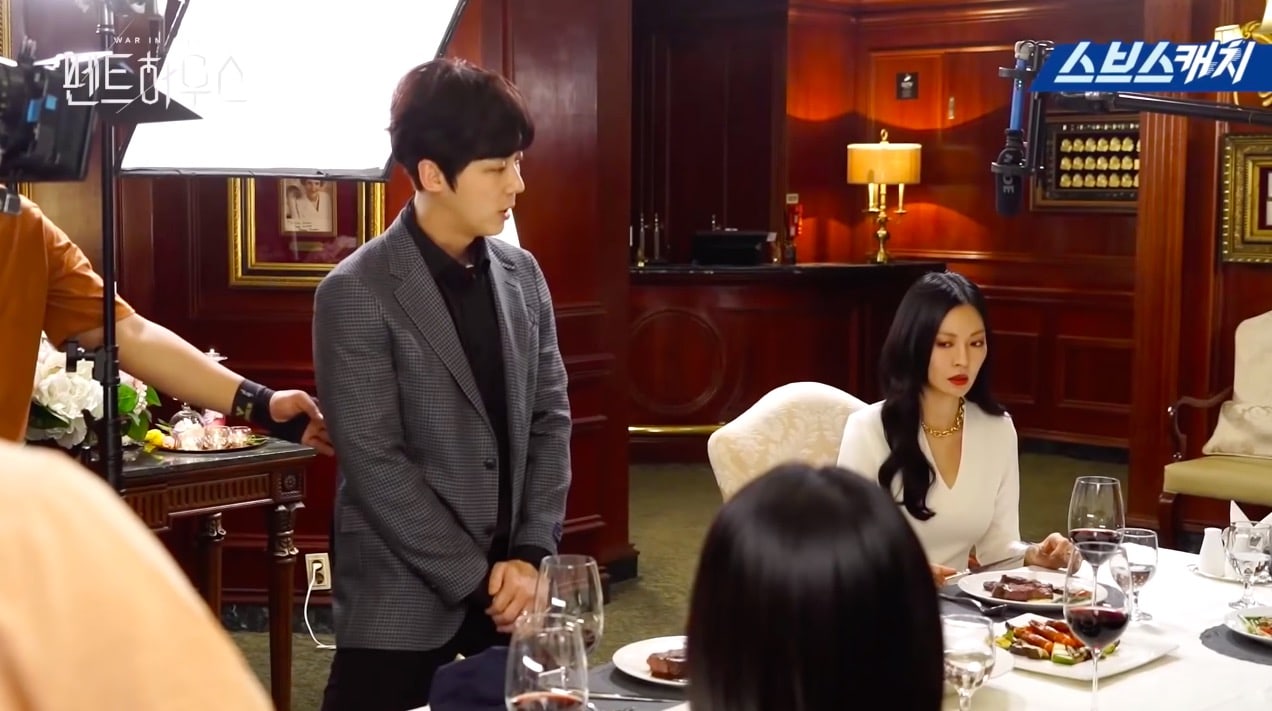 In another clip, Lee Ji Ah gives her onscreen daughter Han Ji Hyun (in the role of Joo Seok Kyung) a big hug as they film a tense argument scene together. She also carefully removes something off Han Ji Hyun’s face when the camera’s off.

In addition, also contrary to their characters, Lee Ji Ah and Kim Young Dae (who plays her son Joo Seok Hoon) show their friendly relationship between takes of a scene in which Joo Seok Hoon tells Shim Soo Ryeon to stay out of their business. Lee Ji Ah says to Kim Young Dae, “You ate an apple earlier, but will that be enough?” He assures her that he’s not hungry. 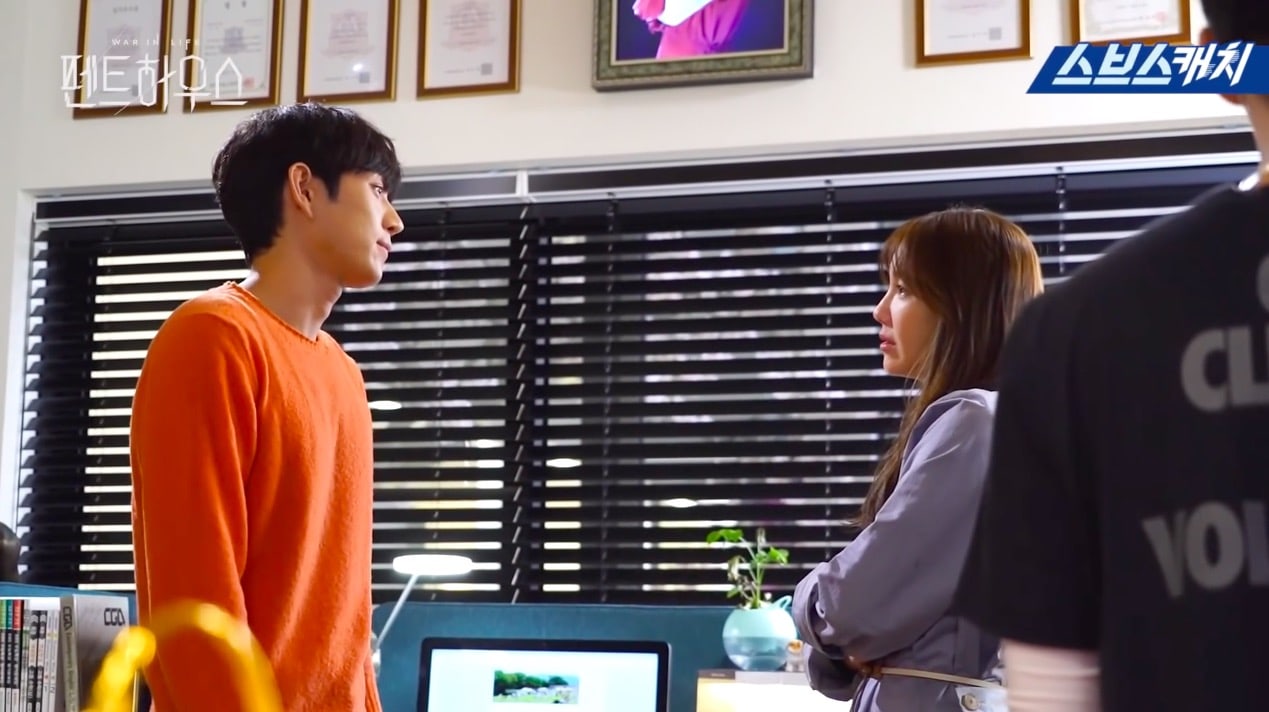 The kidnapped Oh Yoon Hee (Eugene) struggles and lashes out as she’s tied to her chair, and she checks on her co-star Bong Tae Gyu (in the role of Lee Kyu Jin) to make sure she hasn’t hurt him. “I’m exhausted!” she admits to the making-of staff when they ask, and Bong Tae Gyu says the both of them are. “I wish they’d hurry up and take you away,” jokes Bong Tae Gyu. 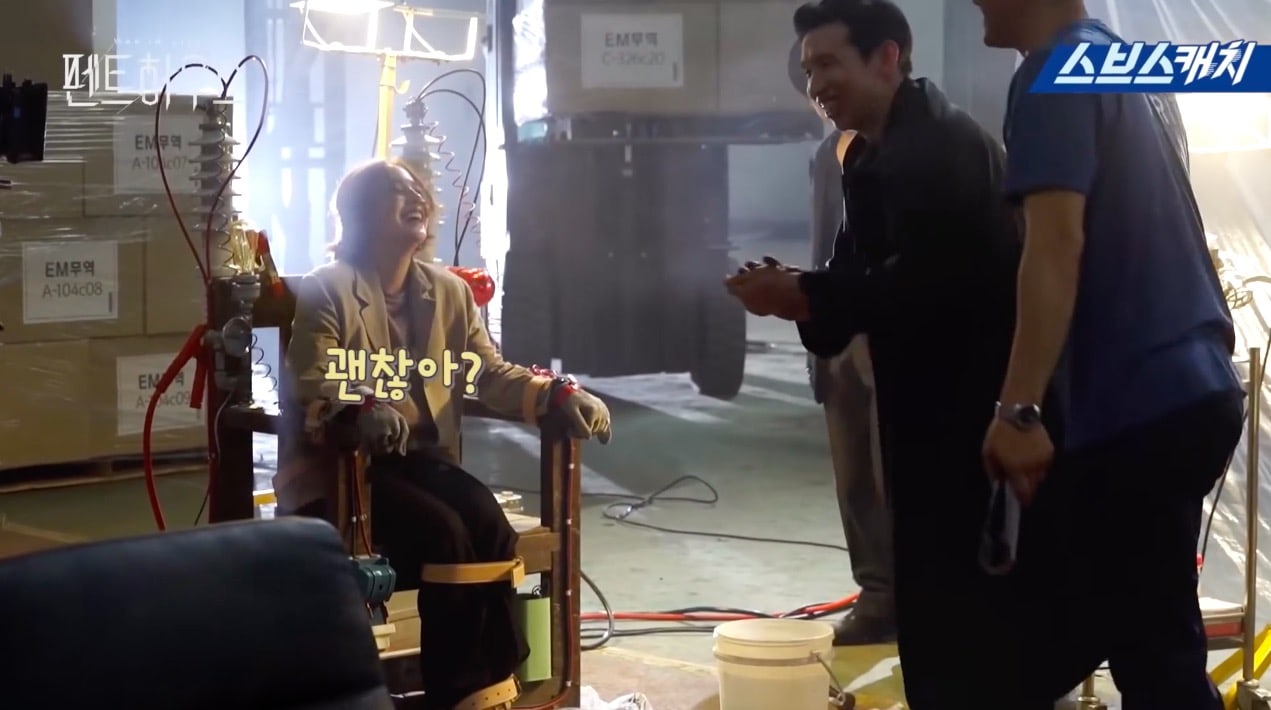 In another scene, Park Eun Suk and Eugene happily greet a baby who’s been brought to the set. While filming the scene of Cheon Seo Jin and her father on the staircase, Kim So Yeon is pleased to see Choi Ye Bin (her onscreen daughter Ha Eun Byeol) watching her on set and gives her a happy wave, so Choi Ye Bin makes a heart with her arms for her.

Choi Ye Bin explains to the making-of camera that she’s watching her mother’s “horrific murder scene,” jokingly pretending to be terrified. When asked to say something to her “mom,” Choi Ye Bin says with a laugh, “Mom! I think you should stop killing people” before adding, “Mom, I love you.” 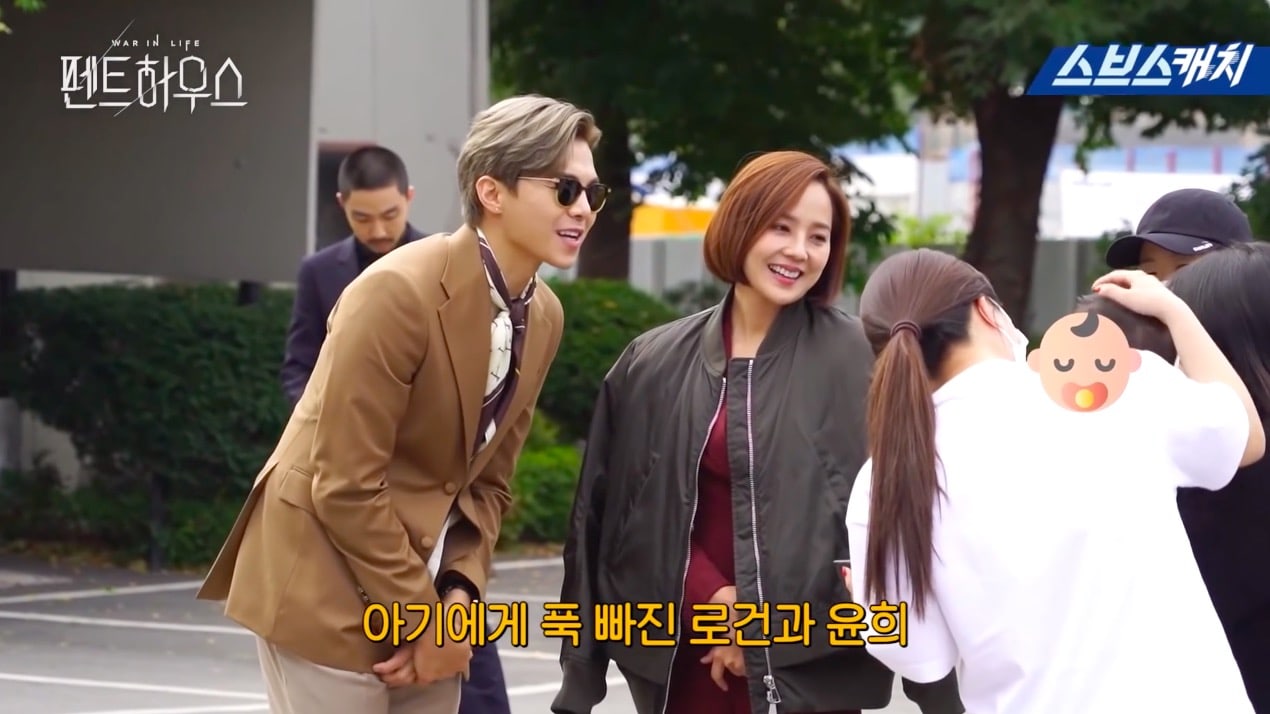 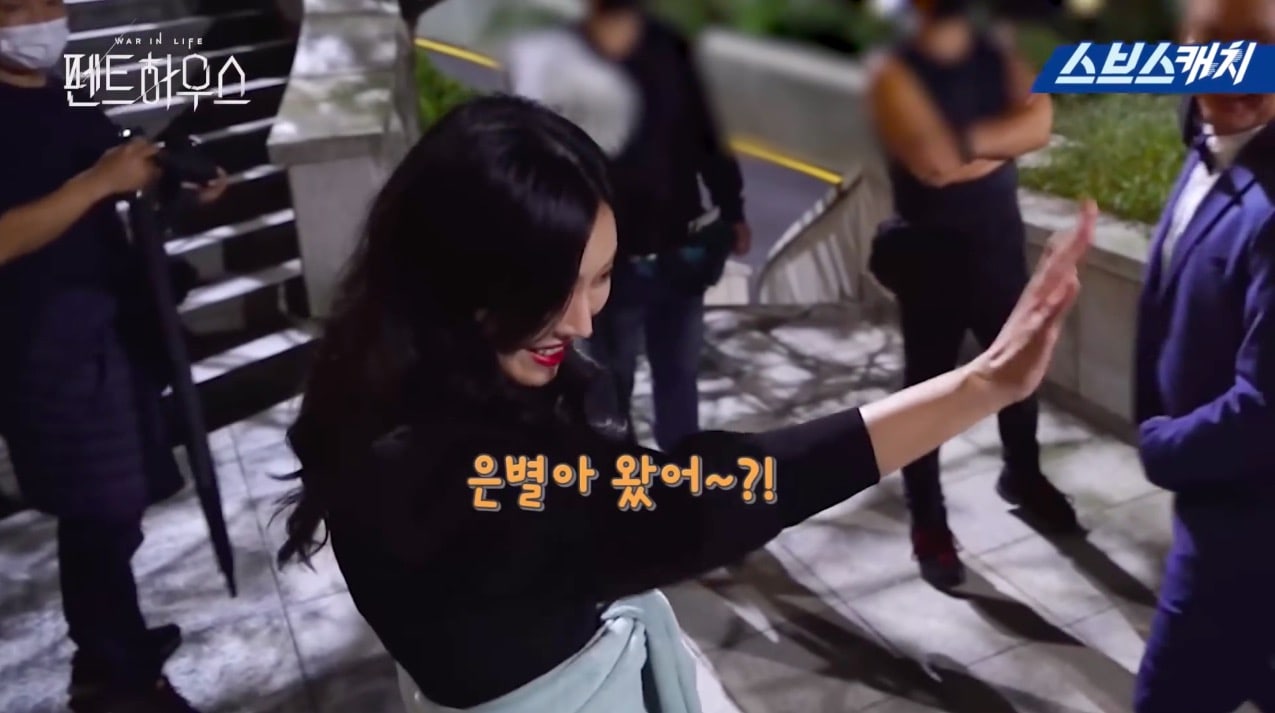 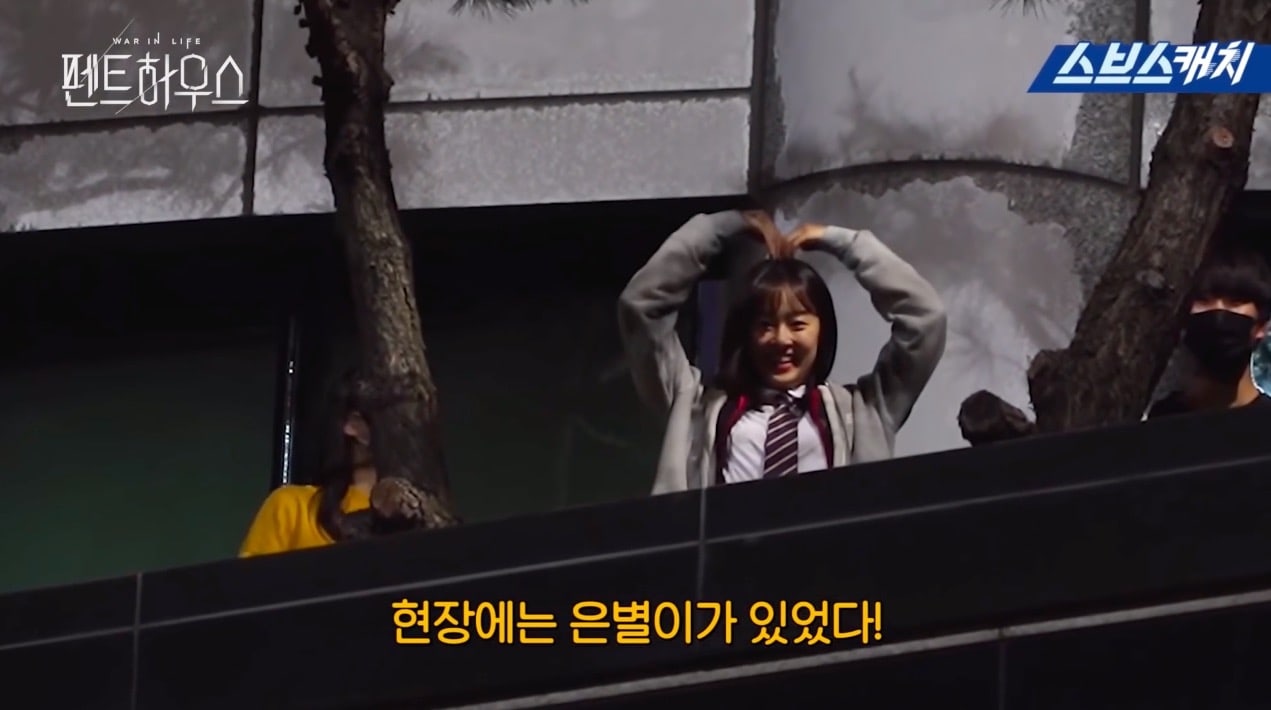 A rehearsal takes place for the scene where Cheon Seo Jin confronts Eugene and Joo Dan Tae (Uhm Ki Joon) in a parking lot, and Eugene jokes, “Women must be making Dan Tae tired too.” Kim So Yeon and Uhm Ki Joon laugh as they try to figure out how they’ll fight and they rehearse their scene.

Check out “The Penthouse” here!