On the latest episode of “My Ugly Duckling,” Cha In Pyo dished on married life with his wife Shin Ae Ra!

During the January 24 broadcast of the SBS variety show, the actor made an appearance as a special MC. Introducing him as “the nation’s husband,” host Shin Dong Yup joked, “In a way, he’s the public enemy of South Korean husbands: a guy who is [famous for being] completely devoted to his wife.”

Seo Jang Hoon then asked, “Back when Shin Ae Ra appeared on the show, she said that Cha In Pyo says the words ‘I love you’ to her about five times a day. Do you still say it five times a day?”

After a moment of consideration, Cha In Pyo replied, “I do say it about five times per day: once when I wake up in the morning, once when I go out, once when I come home, once after dinner. It might actually be about six times a day.”

Seo Jang Hoon asked him, “What about when you’re busy outside?” “Then I say it by phone,” replied Cha In Pyo. “Because if I don’t say it, who will? She’s my wife.”

The actor went on with a laugh, “My wife usually texts me back saying, ‘Me too.’ The words she says most are ‘Me too’ and ‘Don’t make a mess.'” 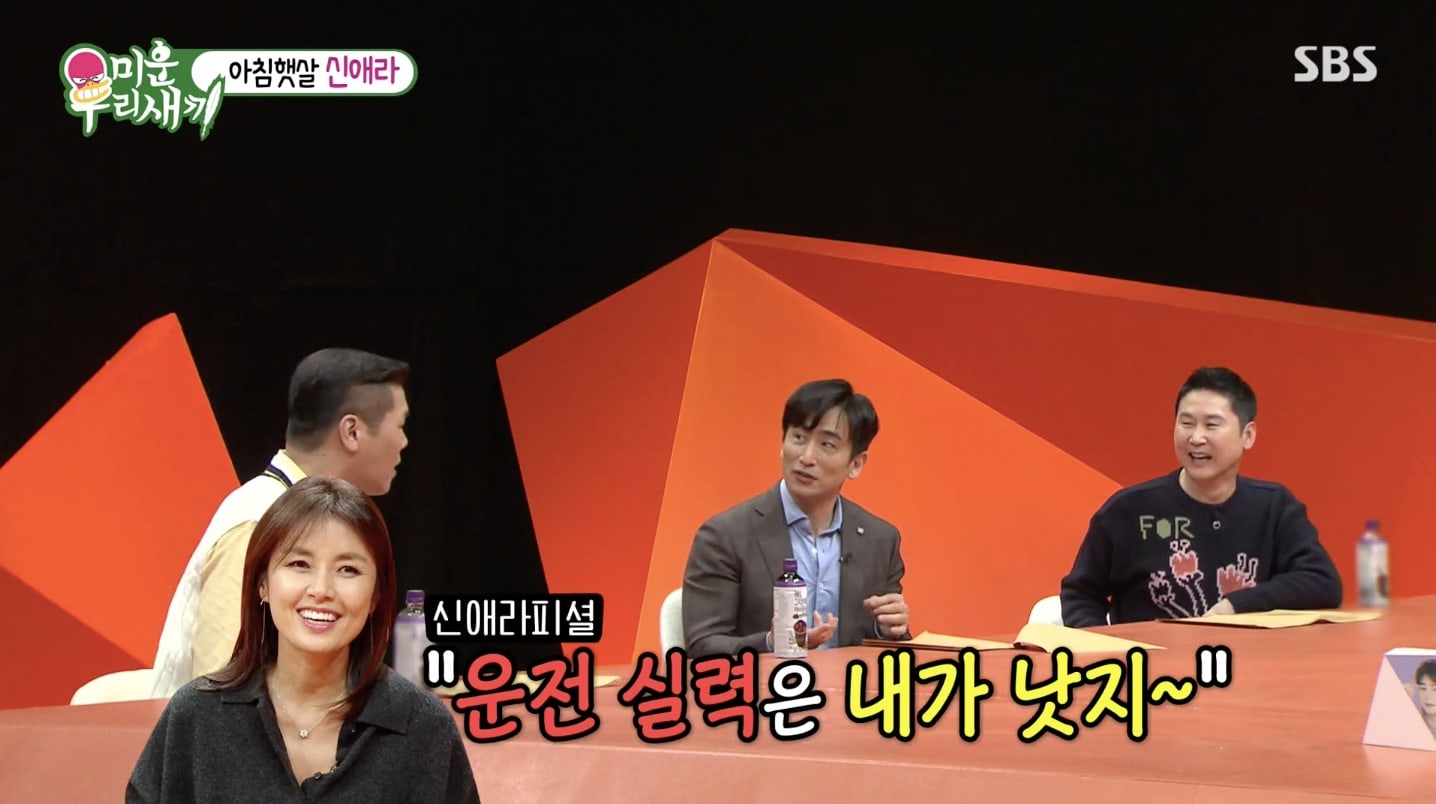 Later, Seo Jang Hoon mentioned something Cha In Pyo had said in the past, recalling, “When Shin Ae Ra was on the show, she talked to you over the phone. You said, ‘For me, the shelf life of love is up until the day that one of us—either my wife or I—passes away.’ Do you remember that?”

Cha In Pyo responded, “Yes, now that you say it, I do remember it. But looking back on it now, I think I misspoke. If one of us passes away, we don’t know what will happen to the other one of us. So I want to edit that part of the quote to ‘the day that both of us pass away.'”

Shin Dong Yup then asked him a question that the “My Ugly Duckling” hosts commonly ask their guests: “If you were born again, would you still marry your current wife?”

After letting out a sigh, Cha In Pyo paused for a long time as he mulled over the question, making everyone burst out laughing. Seo Jang Hoon noted in surprise, “It’s taking you a lot longer to answer than we expected!”

In the end, Cha In Pyo wittily evaded the question by remarking, “I’m Christian, so I don’t believe in reincarnation.” Shin Dong Yup commented in amusement, “This is the first time someone’s avoided answering that question like this.” 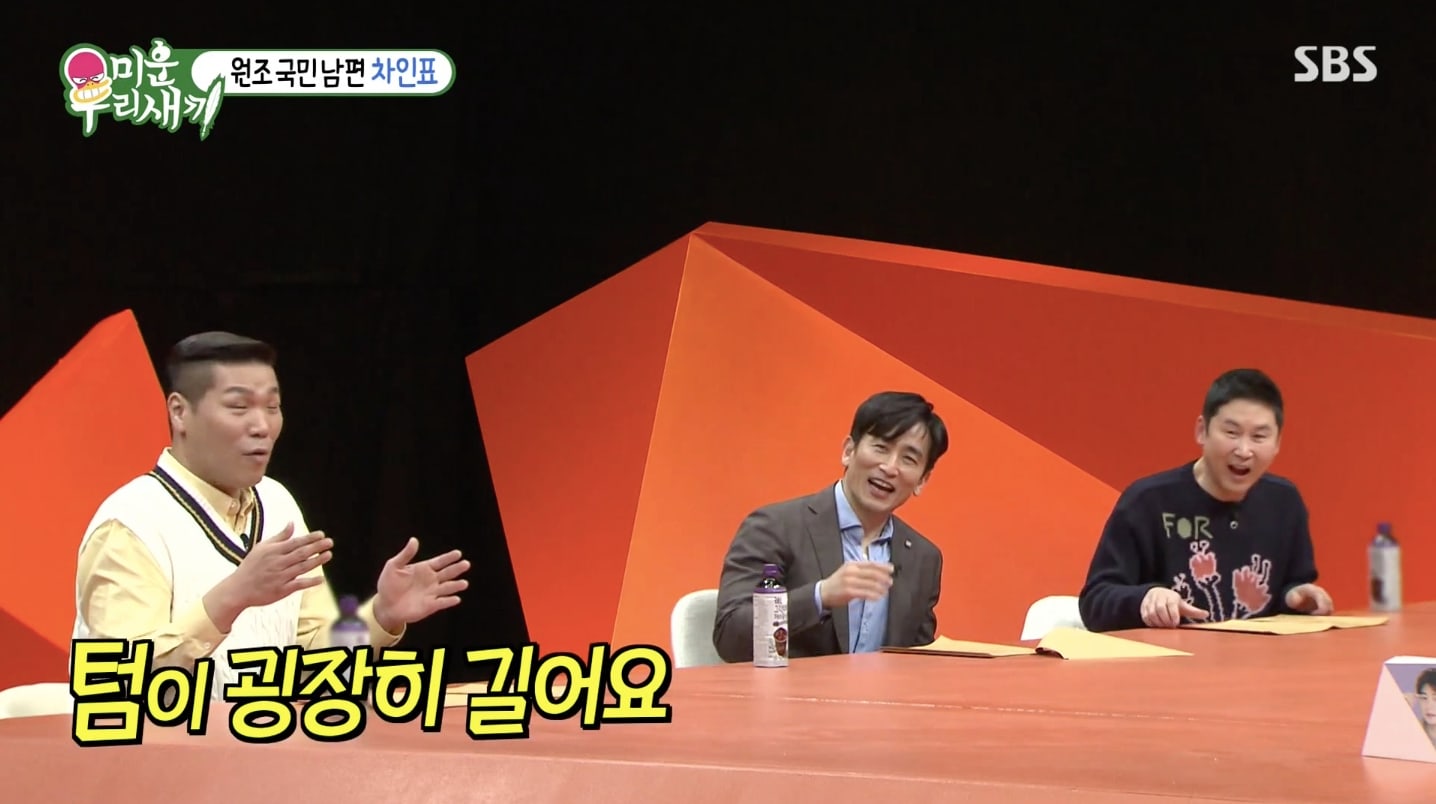 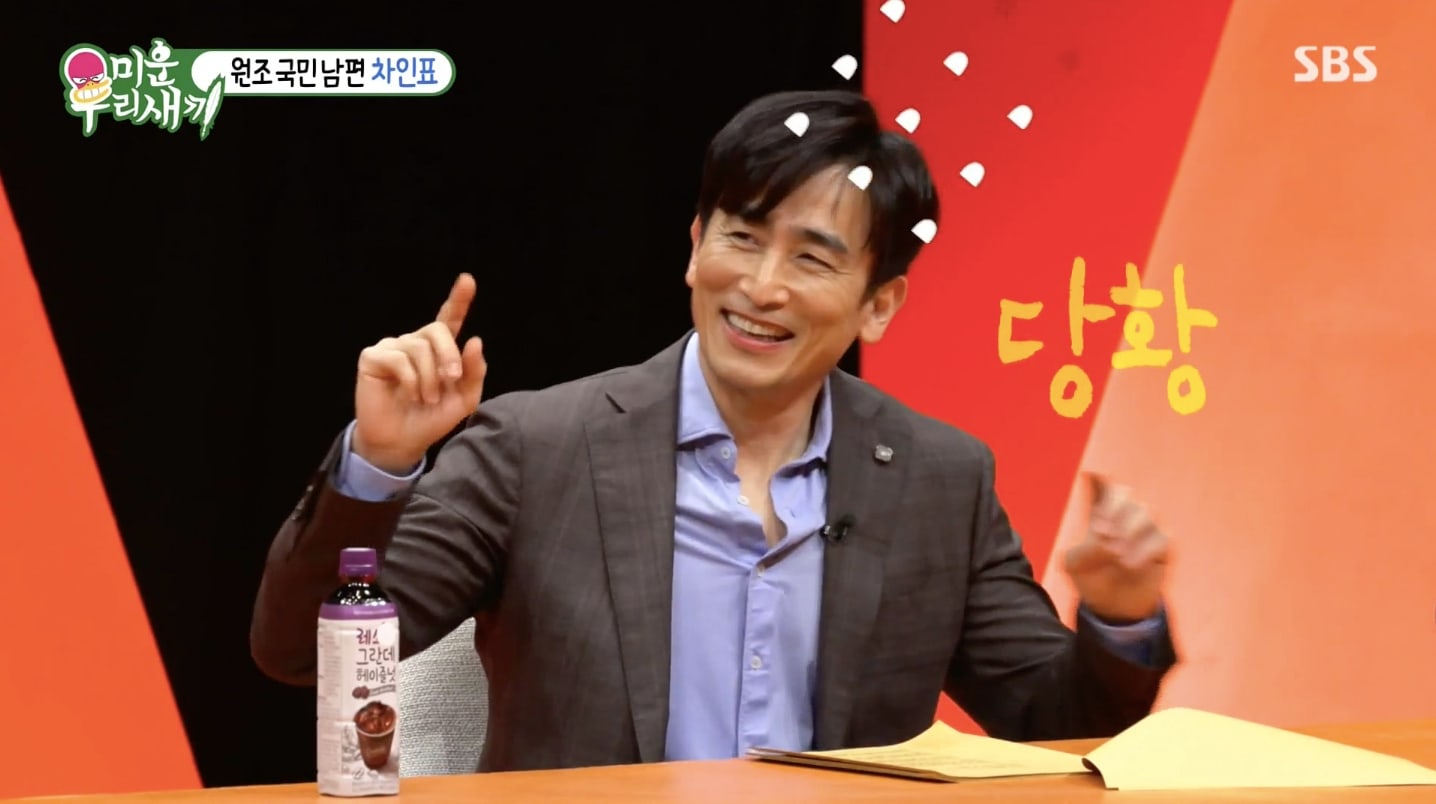 The hosts also asked Cha In Pyo how he thought he stacked up to Choi Soo Jong, another actor famous for being a devoted husband.

In response to a question about when Shin Ae Ra looked the most beautiful in his eyes, Cha In Pyo shared, “In the morning, when we first see each other after waking up, she always smiles brightly at me and asks, ‘Honey, did you sleep well?’ For the past 20-something years. That can’t be easy. There must be days when she feels tired, but she always greets me like that. It makes me think, ‘Wow, I really married the right person.’ Just being able to see and hear that kind of greeting makes me so happy.” 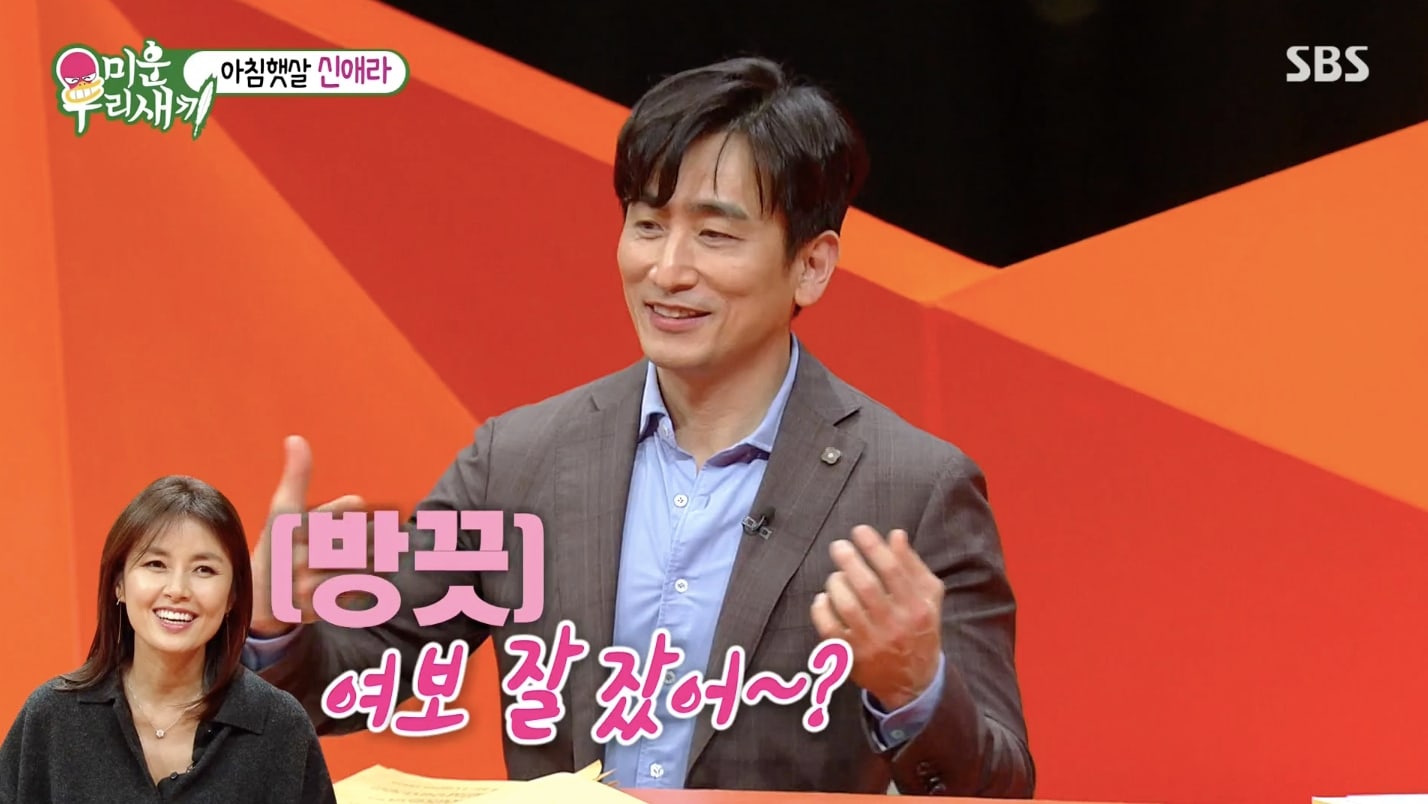 Shin Dong Yup went on to ask, “Are there ever times when you feel a little scared of your wife?” Cha In Pyo replied, “I don’t ever really feel scared of her. But sometimes, my pride gets hurt when it comes to driving. My wife thinks she’s a better driver than I am, and I think I’m better than her. Sometimes, something she says makes me think, ‘Is she looking down on my driving?'”

He continued with a laugh, “Early on in our marriage, my wife’s car was black, and my car was white. While parking, I bumped into my wife’s car by accident. So I had a black scratch on my car, and my wife had a white scratch on hers. Because of that incident, up until now, whenever I try to park my car, she says she’ll do it instead. So then I have to give up the driver’s seat.” 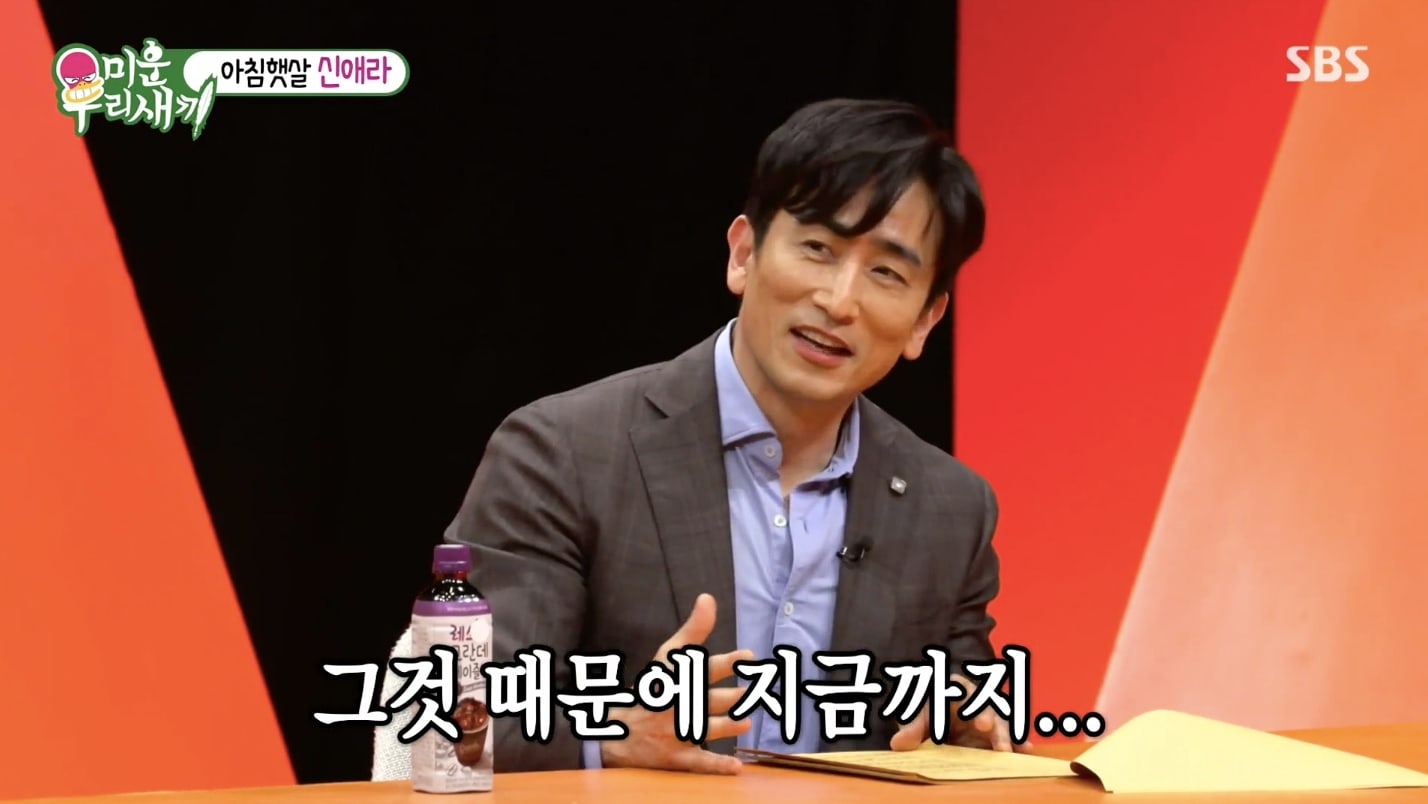 Cha In Pyo
Shin Ae Ra
My Little Old Boy
How does this article make you feel?