Park So Dam Talks With MAMAMOO’s Solar About Taking On Challenges While Acting, The Type Of Role She Wants To Try, And More

Park So Dam sat down for an interview with MAMAMOO’s Solar!

On January 25, Solar shared a video on her YouTube channel “Solarsido” featuring herself interviewing actress Park So Dam. The pair recently both appeared on the reality show “Camping Vibes.”

Park So Dam said that she’s currently performing in the play “Grandpa Henri and I” (also known as “The Student and Mister Henri”) and pointed out that Solar had come to see it. “It was really interesting,” said Solar and she also shared that she cried while watching it.

Solar commented, “You left him on read,” and they both laughed. “He contacted me again and asked why I didn’t believe it,” said Park So Dam. She also talked about how she had previously spoken with Bong Joon Ho when she was called in to audition for his film “Okja.” Although it was decided she would be too old for the role of the character Mi Ja, she had chatted with the director for an hour and a half. 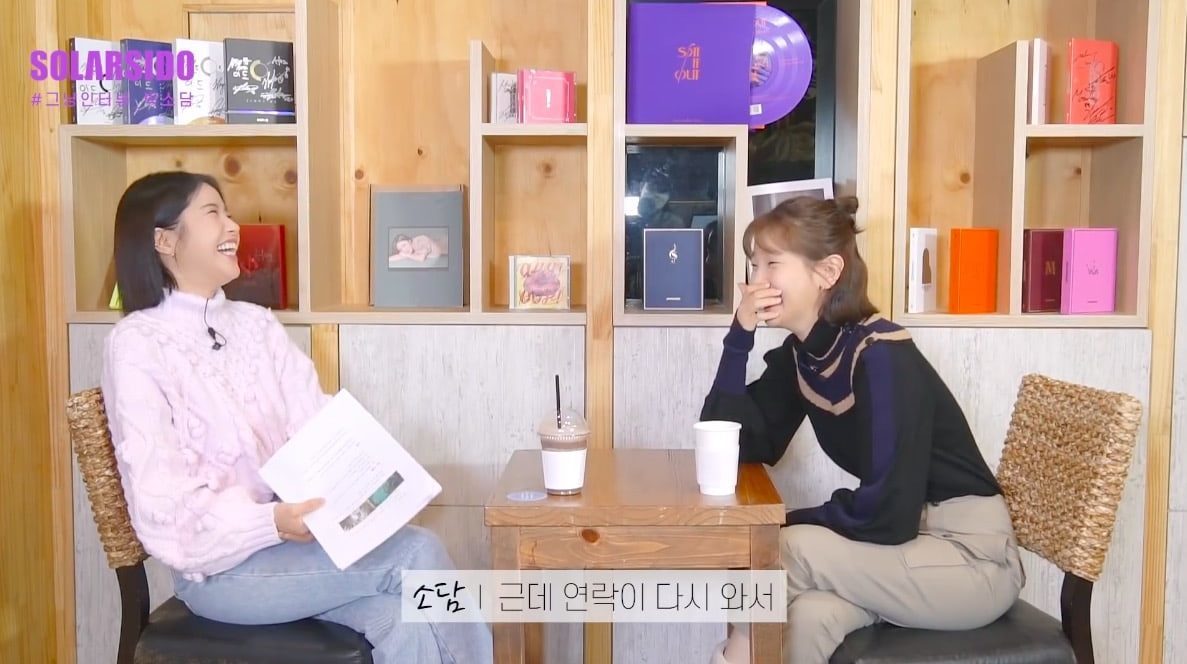 Solar asked Park So Dam to confirm some of the things she’s read about the secrets behind the filming of “Parasite.” Park So Dam confirmed that the alley outside her character’s family’s semi-basement apartment was a set built inside a tank so that it could be filled up with water for the flooding scene. “I was surprised too when I first went,” said Park So Dam. “It seemed like it was real.” The actress also confirmed that the rich Park family’s home had entirely been built for the movie and is no longer standing.

Solar went on to ask Park So Dam about going to the Cannes Film Festival with the film. Park So Dam mentioned how close the cast was with each other and said, “I went with the mindset that I should see, hear, and feel as much as I could. But I was so nervous. I looked behind me and Tilda Swinton was there. I was so flustered. It was really big, and my face was appearing on that big screen. They were clapping and cheering while watching the movie, and I felt so touched. It felt quite strange.”

Solar shared that she’d also felt overwhelmed with emotion while watching at home. “I thought I was going to cry [when you won the award],” Solar said. Park So Dam replied, “We’d all already cried a few times and every moment was so touching.” She also said with a laugh that she still feels bewildered over it.

The MAMAMOO member brought up how Park So Dam had shaved her head for the film “The Priests.” “Do you feel scared about such transformations?” asked Solar.

“Rather than it being scary, taking on a challenge is really fun and I look forward to it,” said Park So Dam. “Thankfully, I seem to be the type of person who enjoys that. ‘When else would I shave my head? When would I get to perform like this?’ I get excited just over being given such opportunities.”

Solar also asked Park So Dam if she’d been frightened while filming “The Priests.” “I wasn’t scared at all,” replied Park So Dam. The pair laughed as she continued, “I slept so peacefully. I’ve never had a nightmare or experienced sleep paralysis.”

Park So Dam shared that everyone on set had talked every day about how to make things more fun and scary. “But I’ve heard that you can’t watch scary things,” said Solar. Park So Dam replied with a laugh, “Yes, I can’t, I don’t, and I hate it!” She explained that she was able to watch “The Priests” because it didn’t seem scary to her since she was in it.

Solar asked Park So Dam to describe the kind of role that she’d like to play. “I’d like to film a drama like ‘Forest of Secrets,'” said Park So Dam. “I want to try playing a woman that’s a bit more mature.”

Watch Solar and Park So Dam in “Camping Vibes” below!

MAMAMOO
Solar
Park So Dam
Parasite
How does this article make you feel?