AB6IX On Their Artistic Influences And Processes, Personalities, 2021 Goals, And More

February’s issue of Singles Korea features the members of AB6IX!

The group talked about their method of songwriting as Kim Dong Hyun shared, “After the song is complete and we confirm it with our agency, the members all listen to it together and then we record. Occasionally, there are times when I’ll have my members listen to it first at the dorm.”

While discussing the latest release of their repackage album “SALUTE: A NEW HOPE,” Park Woo Jin praised Lee Dae Hwi for writing the lyrics to “APRICITY” and their fan song “ENCORE.” About the fan song, Lee Dae Hwi commented, “To be honest, the genre was a bit unfamiliar for me. However, I thought that it would suit AB6IX really well and it touches you that much more dramatically because our ABNEW [AB6IX’s fans] featured on it. We just added the cherry on top.”

Park Woo Jin chimed in, “After our debut, this was the first time I got chills after listening to a guide.” Jeon Woong added, “If we get to sing this at a concert, I think I’ll cry. The song is great so please take a listen.”

Lee Dae Hwi, who has been coined a genius for his all-around talent, commented on the image by saying, “My image as a genius has been so well developed by my agency and on broadcasts but if you look deeper, I don’t really have much. Although I’m thankful for the nickname, I also feel a bit upset because I think it overshadows everything I worked really hard for.”

He continued, “I was able to get here by sleeping less than others and studying harder, but I think the image has been solidified that I’m naturally talented and therefore had it easy. That’s disappointing so I’ve been working on a new image to overcome that.” 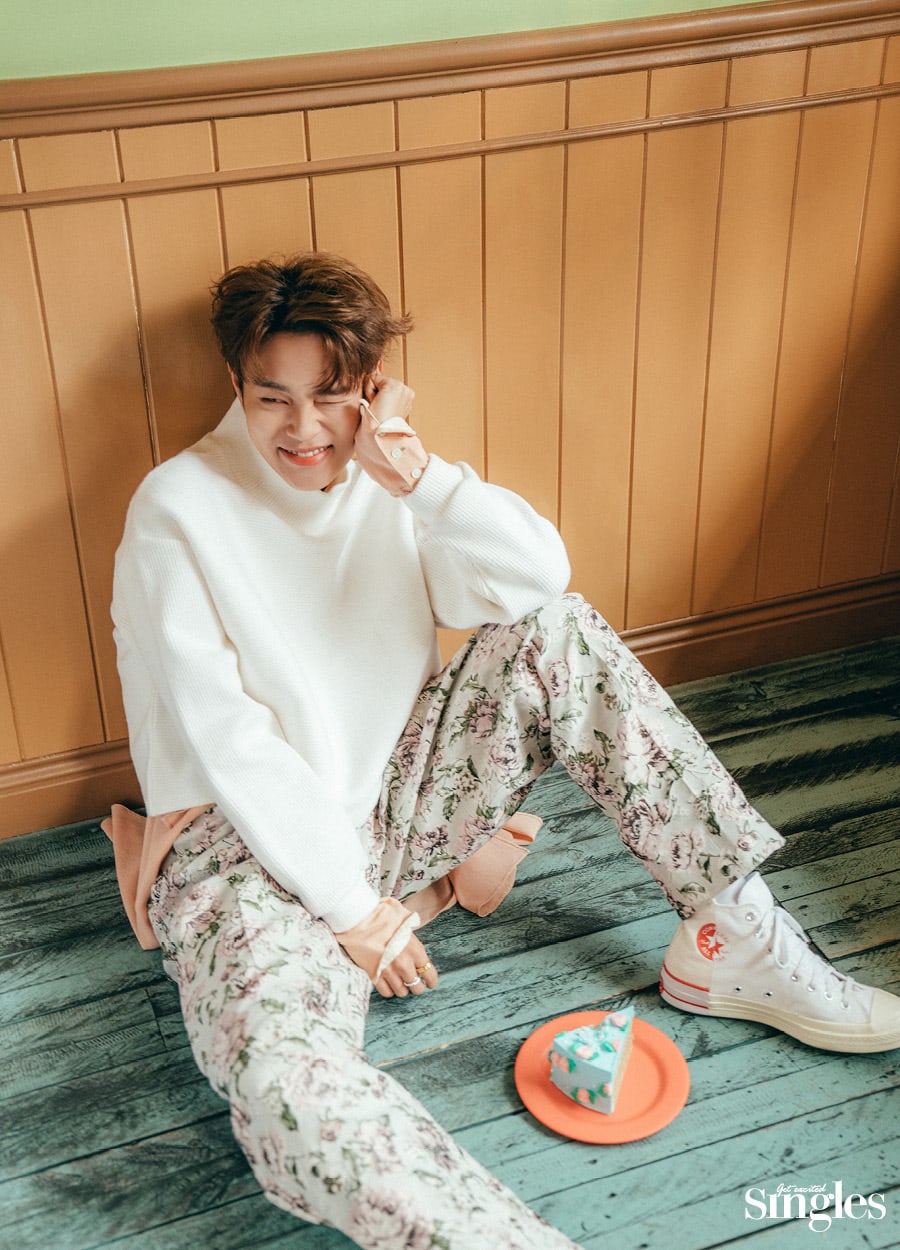 Kim Dong Hyun talked about his musical influences, sharing, “I was in a band since middle school. There aren’t many songs that I can play from start to finish. My priority was always vocals and I’ve kept my cover songs to about one verse even after my debut. However, there are quite a few songs I can cover. I’ve even practiced songs by Jang Beom June, Busker Busker, Geeks, and Epik High after rearranging them into a band session. If I ever get to make solo music, I want to try music that combines R&B with an acoustic sound. A genre like the music Jeong Sewoon does.” 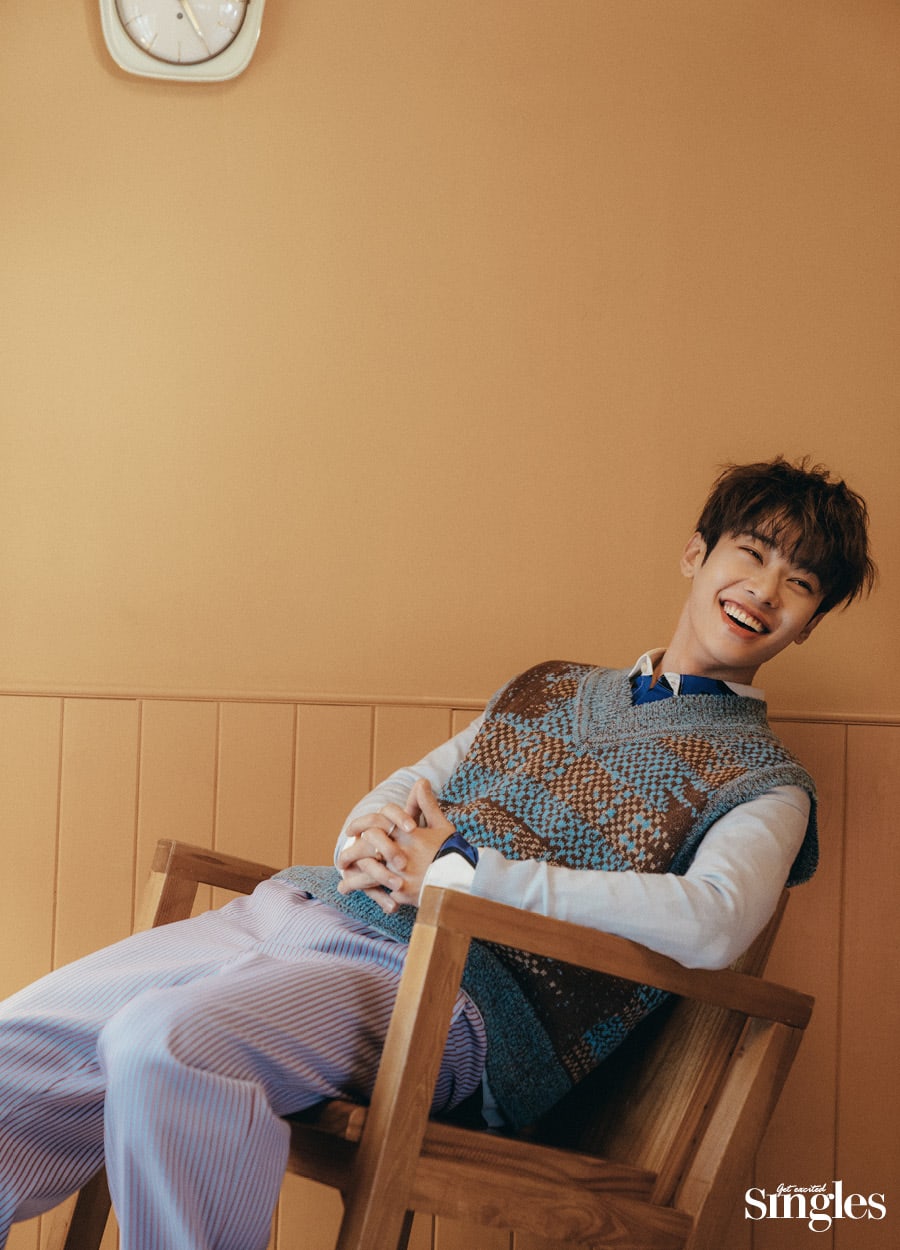 On top of contributing to the group’s songwriting, Park Woo Jin is an avid choreographer for AB6IX. He shared, “Ever since I was young, I attended a dance academy and had to choreograph so rather than feel inspired, I have my own formula. First off, I get an understanding of the music’s topic and story and then I draw out a big picture. After picking a concept of sadness, happiness, sexiness, etc., I think of the power and beat that matches that. I think of cool moves in my head and then I freestyle to the song.”

Park Woo Jin added, “From that, there are times where I pick stuff out. I turn the music off for a second and I organize the movements before filming it. You can look at it like doing a puzzle. I organize the overall details and then complete it after writing down the formations and the members’ names. Although there may be times where something good comes out of doing bare minimum work, that hasn’t happened for me. When I didn’t work hard, I haven’t been able to achieve anything. Even if that did happen, I would believe that it was the result of some kind of effort I had put in in the past.” 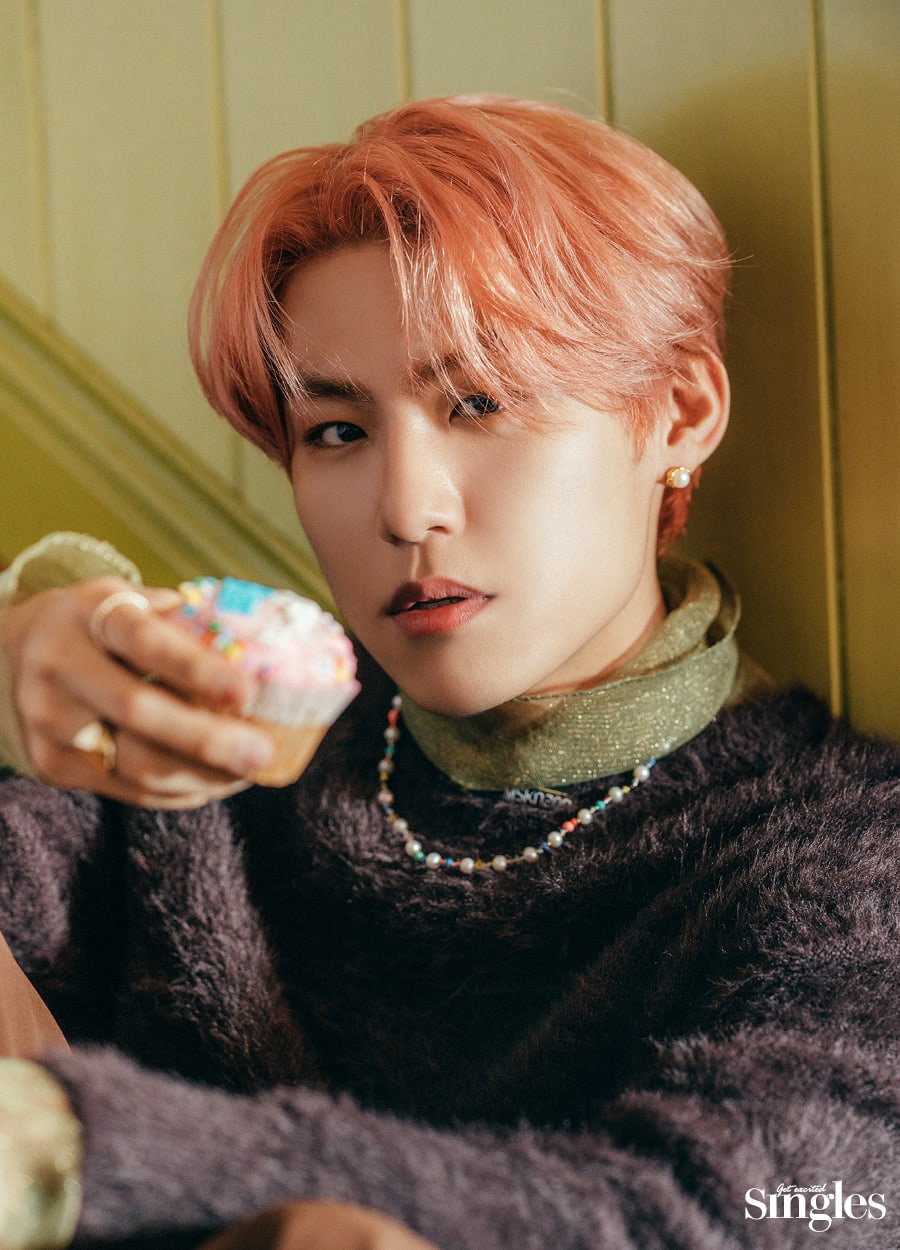 Jeon Woong touched on being the group’s eldest member, commenting, “Rather than me helping them out, I end up receiving more help. Technically, they debuted before me and are basically my seniors. I rely on them both on stage and mentally. Although there isn’t no pressure at all, that pressure is quite minuscule compared to the stress Dae Hwi feels while producing. Since we know Dae Hwi’s stress well, the other members including myself work on song and lyric writing to help relieve at least a little bit of the pressure on Dae Hwi.”

He continued, “Within our team, there also hasn’t been a time where the responsibility of being the oldest has heavily fallen upon me. I rather just express my affection more and just have more to learn, so I feel comfortable.” With a laugh, Jeon Woong added, “Honestly, I think everything would be peaceful if I just did well.” 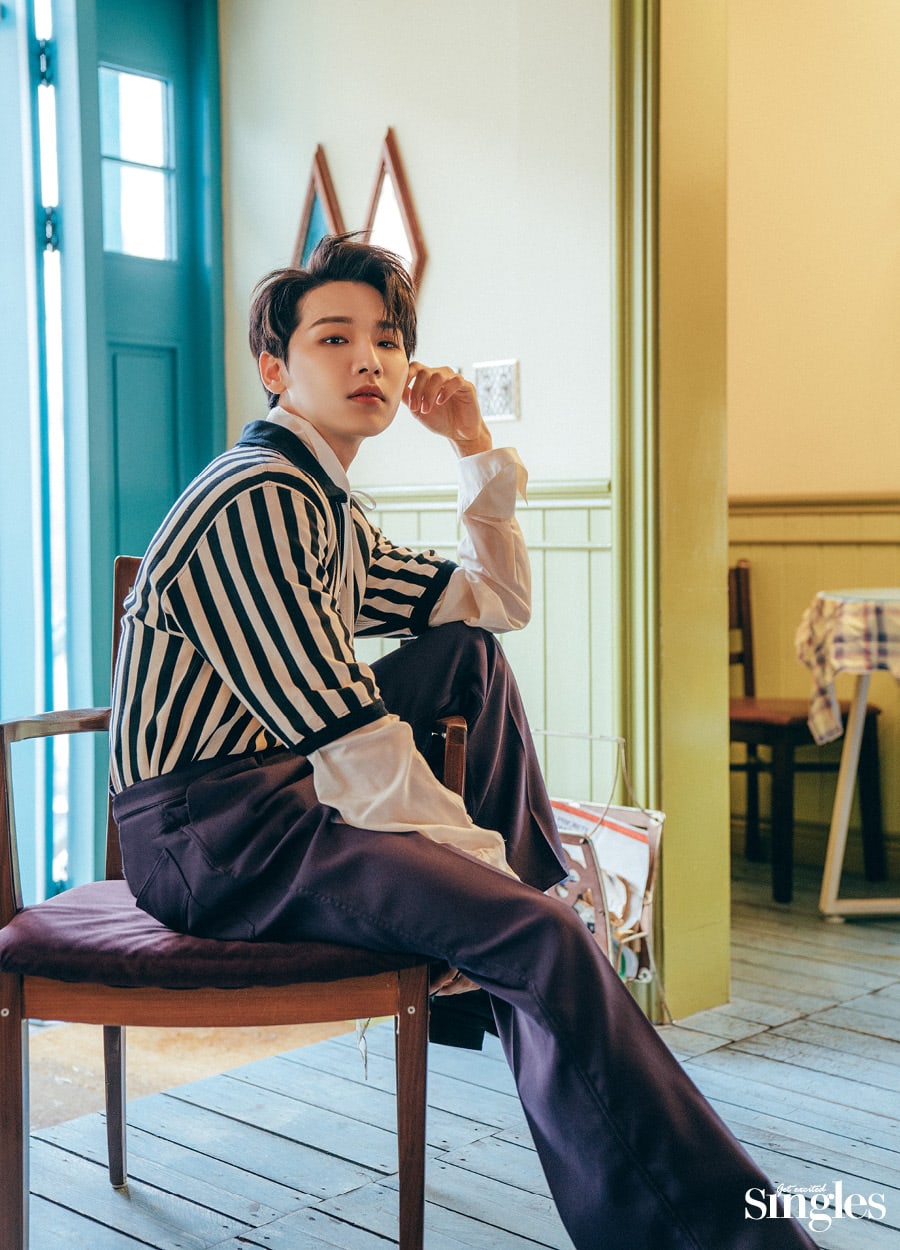 AB6IX also addressed their plans and goals for 2021. Lee Dae Hwi shared, “We want to continue showing our growth musically. We want to set our goal as releasing more good albums. Also, we hope we can appear on television more often. We hope that it will become a 2021 where there will be a lot of content you can find AB6IX on, from music shows to variety shows.”

He followed up with, “After preparing ourselves with healthier bodies and brighter mindsets, we want to expand our members’ individual activities and hope we will be able to promote well.” 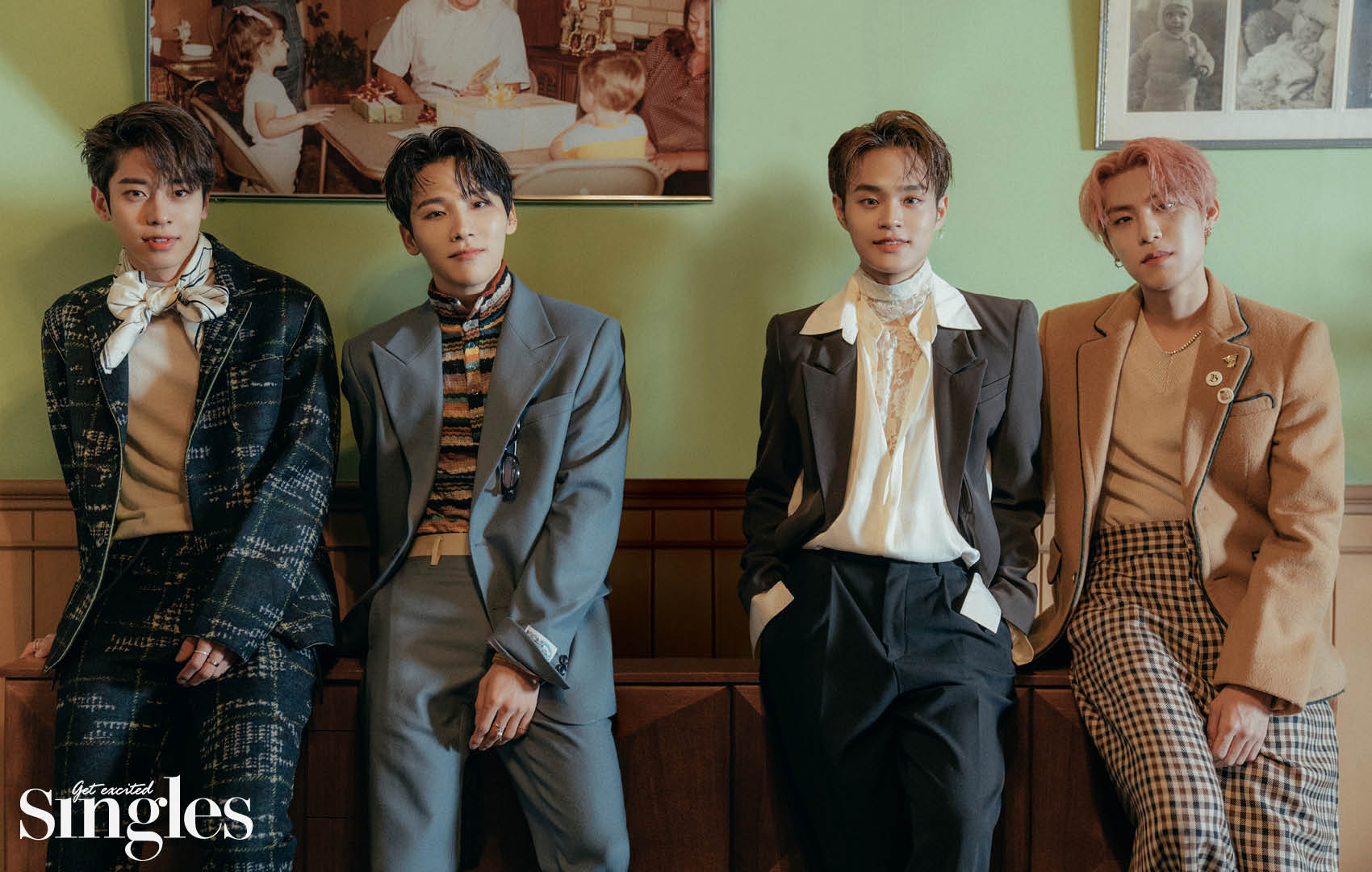 Check out more of AB6IX in the February issue of Singles Korea!

Singles
AB6IX
How does this article make you feel?