As of 1:30 p.m. KST on January 28, IU’s new single “Celebrity” has achieved a certified all-kill. The song was released on January 27 as a pre-release track for her upcoming full album, and it has been sweeping major domestic realtime music charts. 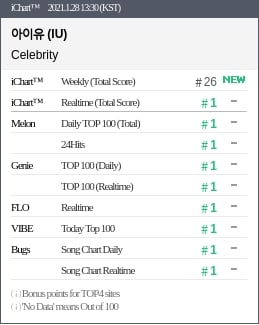 A certified all-kill is given to songs that are No. 1 on the daily and 24Hits charts of Melon, daily and realtime charts of Genie and Bugs, VIBE’s daily chart, and FLO’s and iChart’s realtime charts. It remains to be seen if “Celebrity” will also achieve a perfect all-kill, which requires topping the iChart weekly chart as well.

If you haven’t already, watch IU in “Hotel Del Luna” with English subtitles below: