Watch: “Lovestruck In The City” Cast Enjoys A Rooftop Party In Making-Of Video

The cast of “Lovestruck in the City” showed off all the fun they had filming together in a new behind-the-scenes video!

“Lovestruck in the City” is a short-form drama about the realistic romances of youth who live hectic lives in the city. It is being produced with multiple seasons in mind, and the first season is entitled “My Lovable Camera Thief” (literal translation).

Ji Chang Wook plays Park Jae Won, an honest and passionate architect who is a hopeless romantic when it comes to love. After a woman that he calls “the camera thief” steals his heart one summer night and then disappears, he is unable to get over her—even a year later. Kim Ji Won is the titular “camera thief,” the freelance marketer Lee Eun Oh.

The making-of video begins with Kim Ji Won and So Ju Yeon filming a scene on the exercise equipment at the park. So Ju Yeon surprises everyone with her speed, and the director jokes that she should show off her skills on variety shows. Next, as Ryu Kyung Soo and So Ju Yeon wait for their scene on the rooftop, Ryu Kyung Soo draws attention to her outfit and announces, “She’s the pigeon lady from ‘Home Alone,'” making her laugh in satisfaction.

As So Ju Yeon prepares to ride a bicycle, she tells the camera, “I can ride a bike, but I can’t drive. I have a license, but I haven’t driven in a long time.” She continues with a sheepish laugh, “You need to keep doing it to get better, but I don’t have time. That’s an excuse.” 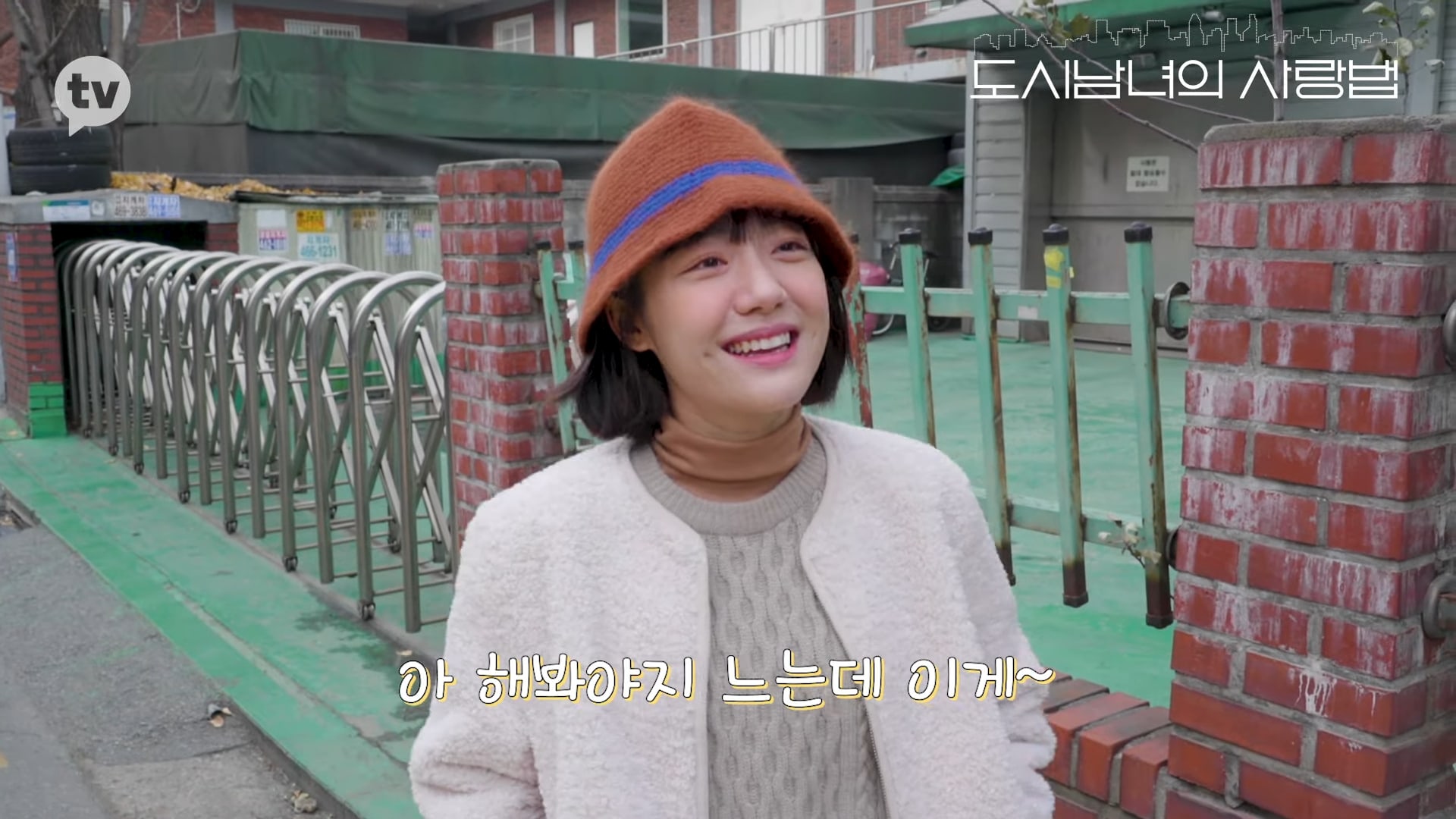 The cast then get together to film a nighttime scene on the rooftop, and the director teases Kim Ji Won by pulling on her hood before going to So Ju Yeon and putting a pair of headphones on her ears. So Ju Yeon takes the joke in stride and begins giving directions as if she has become the director, making everyone around her break into laughter. Kim Min Seok also lifts the mood with his playful singing, and they begin to rehearse in good spirits.

Ji Chang Wook appears on set, announcing that he has come to participate in the rooftop party. When asked if he enjoys house parties or camping, he answers, “I’ve never done anything quite like this, but it would be nice to have a party on a rooftop.”

Next, Ji Chang Wook and Kim Ji Won rehearse the awkward meeting between their characters, and Ji Chang Wook enjoys some snacks in between filming. Kim Ji Won nervously awaits her scene in which she has to take part in a wordplay game, but she gets through it in just a couple takes and laughs in relief when the scene is over. After being asked if she has ever had a house party, she responds, “I’ve never held one, but I think doing a party like this is really lovely.” 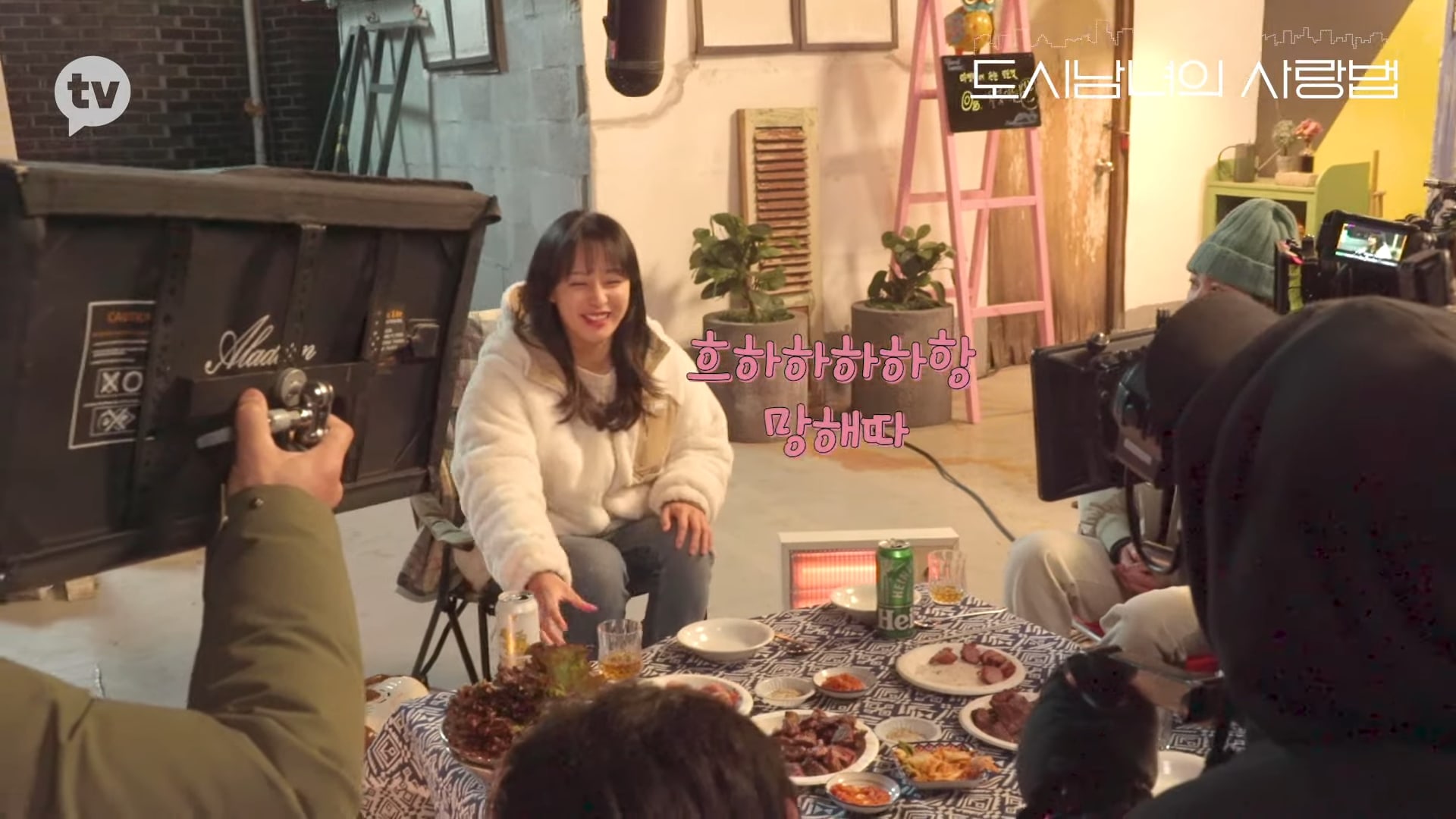 Kim Ji Won then attempts to film her crying scene, but after her suitcase rolls away from her she can’t help but laugh at the comedic mishap. The rest of the staff also join in her laughter after the suitcase begins to roll away a second time and she suggests, “I think we need to film this again.”

In the following clip, Han Ji Eun takes pictures of bread that was bought by the director. Expressing her gratitude, Han Ji Eun explains, “I was taking picture proof of it since I’m so touched. The bread here is famous so I said that it looked delicious, and the director said, ‘Go and choose some!'” She then films a comedic scene with Kim Ji Won and finishes up by telling the camera, “I want to be normal. This is quite a high level of difficulty.”

“Lovestruck in the City” airs every Tuesday and Friday at 5 p.m. KST.

In the meantime, check out Ji Chang Wook in “Melting Me Softly” below: