Watch: Kang Tae Oh And Girls’ Generation’s Sooyoung Show Off Their Perfect Chemistry Behind The Scenes Of “Run On”

JTBC’s “Run On” has revealed a behind-the-scenes look at some cute scenes in the drama’s recent episodes!

The behind-the-scenes video begins with Kang Tae Oh practicing his best puppy impression as he tries to decide the best way to bark in his scene with Sooyoung. Already embarrassed at the thought of his upcoming lines, Kang Tae Oh promises the director, “When we start filming I’ll do a good job.”

True to his word, Kang Tae Oh recites his lines in a professional manner once the cameras start rolling, but Sooyoung can’t help but smile after he says, “Take me for a walk, woof woof.” The pair try again, but this time Kang Tae Oh bumps into the nearby door and lets out a cry of pain. Sooyoung covers her mouth in surprise as she asks if he’s okay before laughing at his clumsiness. 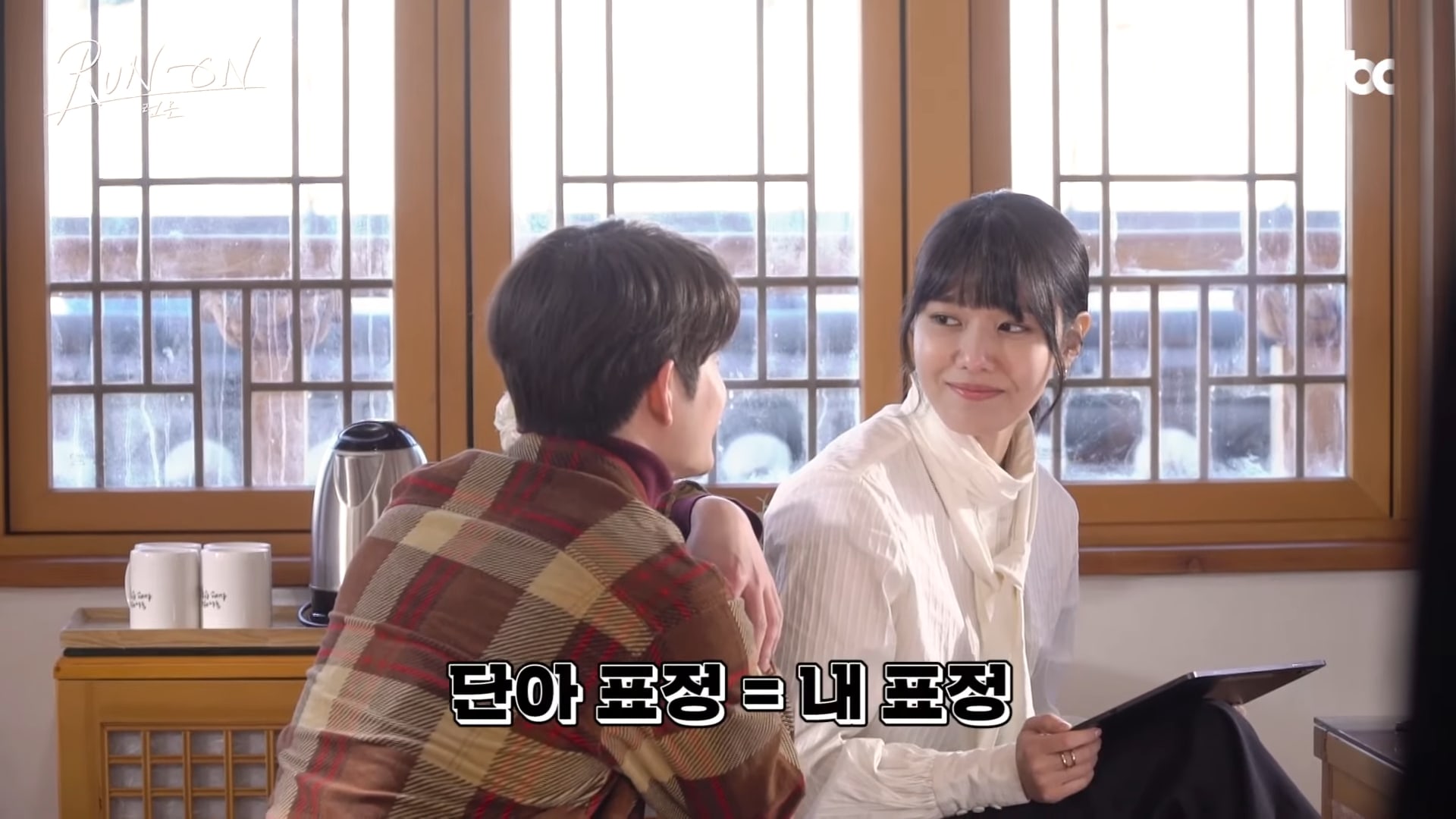 Once they resume filming, the director tries to encourage Kang Tae Oh, telling him to be more confident. Sooyoung attempts to give him advice, but Kang Tae Oh suggests that she should say the line instead. Ignoring her protests, he continues, “Instead of ‘woof,’ how about you try a more resounding ‘bark’? I think you’d do a good job.” Both actors then begin laughing as they discuss their barking technique.

Kang Tae Oh attempts to regain his composure to film the scene again, and although the director says “Okay,” Sooyoung objects and asks to film one more time. Before the take, she coaches Kang Tae Oh to help him get in the zone, saying, “Don’t think of it as you trying to act cute. Just think of it like, ‘That’s right, I’m a puppy, so take me for a walk.'” They finally wrap up the scene after one more take, and Sooyoung gives Kang Tae Oh a high five as she compliments him. 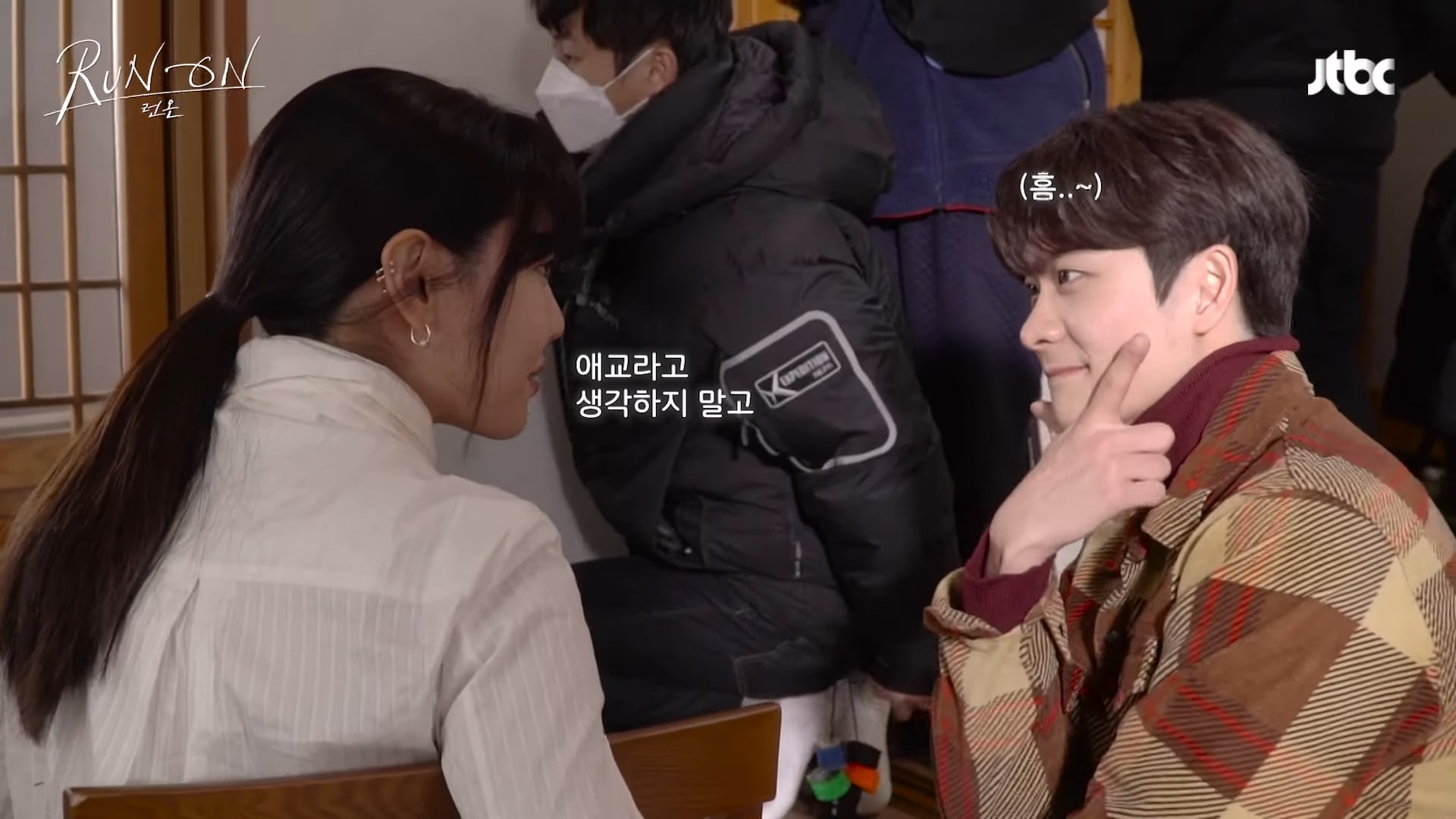 While waiting to film the next scene, Kang Tae Oh sits on the bed drawing a tree. Just as he’s about to put on the finishing touches, Sooyoung appears and rubs an eraser over the middle of it. Kang Tae Oh looks up at the camera with a stern expression before laughing and saying in a joking manner, “I’m speechless.” Sooyoung later tells him that she made his contrived drawing look more natural, and Kang Tae Oh joins her in a discussion of artistic techniques.

The actors then discuss the logistics of their scene in which Kang Tae Oh’s character pulls Sooyoung’s character onto the bed. When Sooyoung points out that the pillows will make the height of their heads different, Kang Tae Oh makes her laugh as he obediently moves one pillow to the side and asks, “Is this okay, ma’am?” 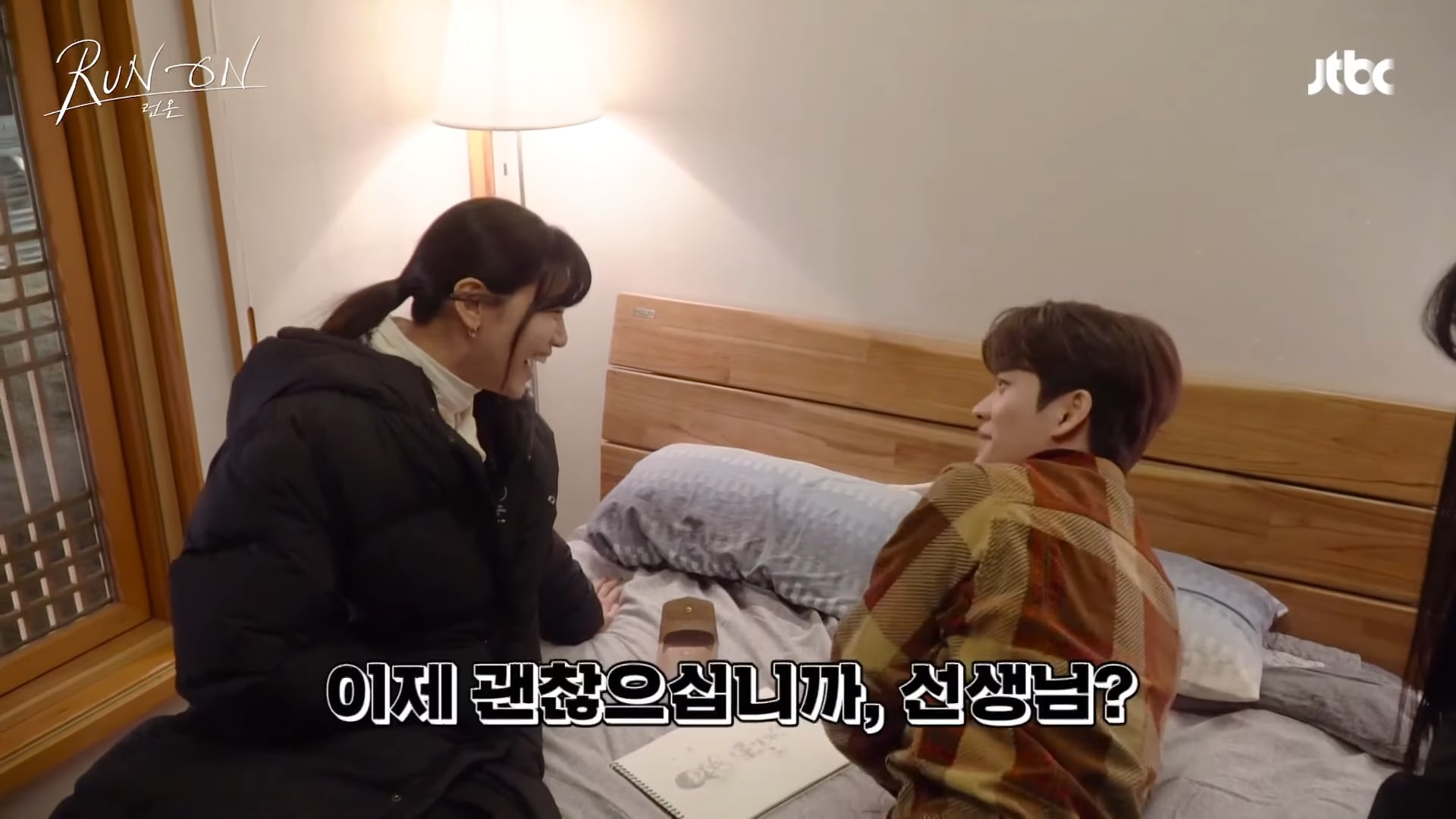 Unlike the previous scene, they manage to film this one in a single take. Afterwards, they inspect the drawing of Sooyoung’s character that was used as a prop in the scene. Sooyoung jokes, “I gained weight,” making the director laugh. The video wraps up as the pair film a few final takes together.

Watch Sooyoung in “Tell Me What You Saw” here:

And watch Kang Tae Oh in “The Tale of Nokdu” below: