In Gyo Jin, So Yi Hyun, And “Master In The House” Cast Share Their Thoughts About Marriage

On the February 7 episode of SBS’s “Master in the House,” In Gyo Jin and So Yi Hyun appeared as the “masters.”

In Gyo Jin and So Yi Hyun got married in 2014 and have two daughters. Prior to their marriage, the two actors starred together in the dramas “Aeja’s Older Sister, Minja” in 2008 and “Happy Ending” in 2012.

Yang Se Hyung asked if they knew the other would be “the one,” and In Gyo Jin said, “It was impossible for me to think ‘this is the one I’m going to marry’ when we first met, because when she was first introduced to me as a fellow actor at my agency, she was still in high school.” (In Gyo Jin is four years older than So Yi Hyun.)

So Yi Hyun said, “We’ve known each other for 20 years. We were close friends to the point where we would talk about our dating lives. But when he was dating someone, I would feel something in my gut, something subtly like jealousy. But we didn’t have a sense of ‘this is the one’ when we first met.”

After knowing each other for a decade, In Gyo Jin said, “Our hearts were open to each other. We met as lovers in a drama and there were several kiss scenes. At the final kiss scene, I thought I would show some sign of affection for her.”

So Yi Hyun said, “We didn’t really date. We sat down and talked about marriage and we started dating with the idea of marriage in mind.” In Gyo Jin said shyly, “The day we started dating, she said that we should get married.” So Yi Hyun reminisced, “We ordered some meat and soju and I asked, ‘Do you want to marry me?'” In Gyo Jin added, “We’d known each other for so long that we didn’t feel like we needed to test out our relationship, that if we dated it would be for marriage. So we contacted each other’s parents right away.” 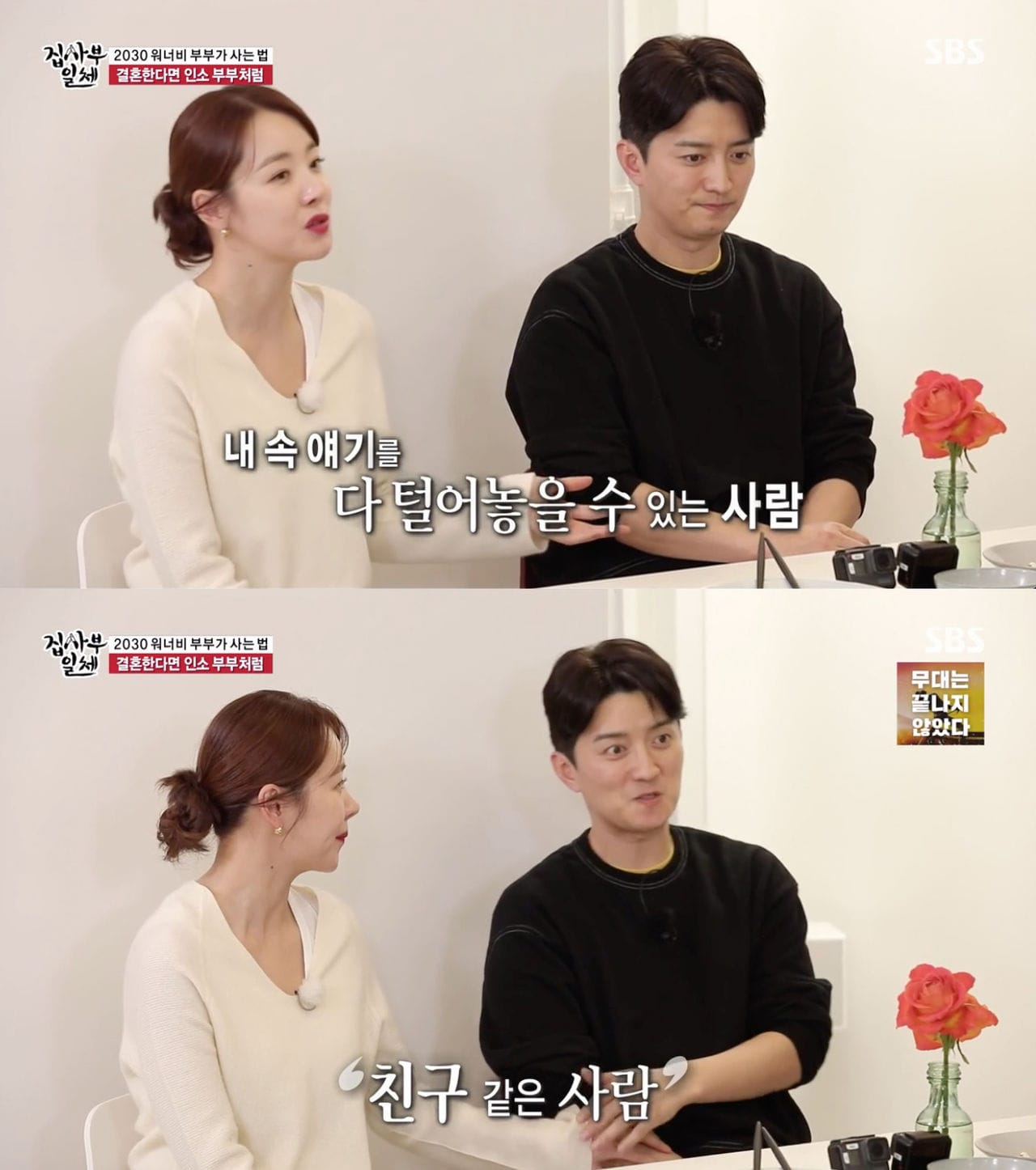 On the “Master in the House” cast, Lee Seung Gi, ASTRO’s Cha Eun Woo, and Yang Se Hyung are unmarried, while Shin Sung Rok and Kim Dong Hyun are both married. Shin Sung Rok said, “Personally, I recommend marriage. I’ve heard from a lot of people around me that I did well to get married. I also think that my career improved after my marriage.” Lee Seung Gi asked if “My Love From the Star” had been after his marriage, but Shin Sung Rok said, “That was before. After my marriage, I did ‘The Last Empress‘ and ‘Vagabond.'”

Cha Eun Woo quipped, “But it was ‘My Love From the Star’ that had the most success.” 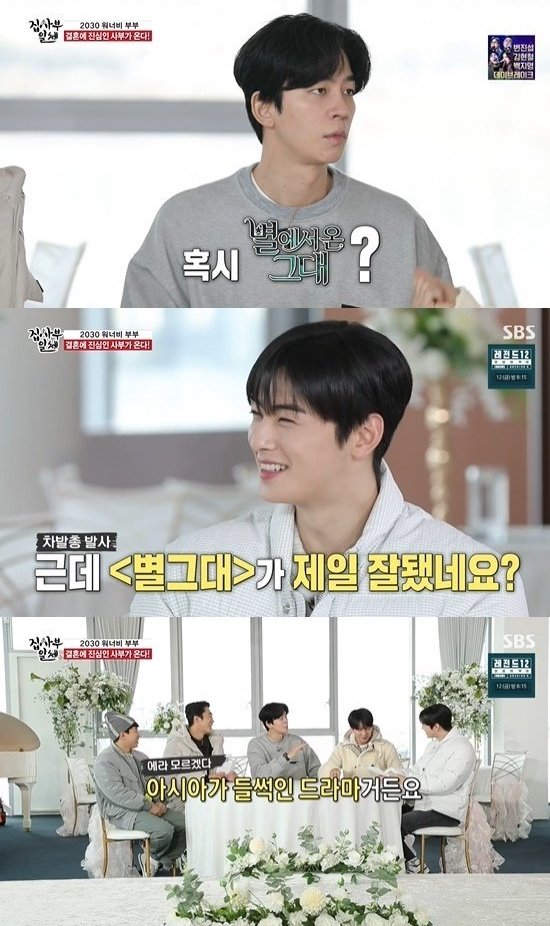 In Gyo Jin and So Yi Hyun also spoke honestly about the challenges of marriage, revealing that while they had never fought before agreeing to get married, they fought several times in the lead-up to the wedding into their newlywed days. In Gyo Jin said, “I was like, ‘Is this really marriage?’ But when I thought about it, it wasn’t anything serious. Two people who had lived different lives alone now had to live their whole lives as a couple. It’s natural for there to be some conflicts and friction.”

So Yi Hyun said, “It’s really important to marry someone who you can communicate with. More than anything else, you have to be able to communicate and understand each other. Someone with whom you can share your innermost thoughts. If you meet someone who doesn’t get embarrassed while sharing deep thoughts, then you shouldn’t let that person go.”

She added, “It wasn’t easy at first. It was the first time that I’d had someone in my life with whom I could do that. But not long after I’d opened up about my most embarrassing and difficult thoughts, I suddenly felt so much more comfortable.” In Gyo Jin said, “If there’s something really difficult or tiring that’s stressing me out, my wife knows right away. She doesn’t say anything but approaches me and suggests that we have some beer together. I find that so adorable. I’m grateful that she takes the time to think of me.”

Cha Eun Woo said, “I feel really envious while listening to this. I didn’t believe in ‘a match made in heaven’, but I think you really are a match made in heaven.” He added, “I really want to get married. It’s not easy to meet a partner with whom you can share your weaknesses. I’m really envious of the idea that a spouse and a family can give you that.” He then startled the other cast members by starting to cry.

Yang Se Hyung tried to comfort him and joked, “Did you get divorced?” Cha Eun Woo explained, “I think it’s really difficult to meet someone whom you can say is always on your side. It’s not about love or marriage and more about the fact that I’ve never been able to speak to someone about my innermost thoughts and have them understand. I want to do it, but I don’t think I’m able to.” Lee Seung Gi then said comfortingly, “We’re on your side.” 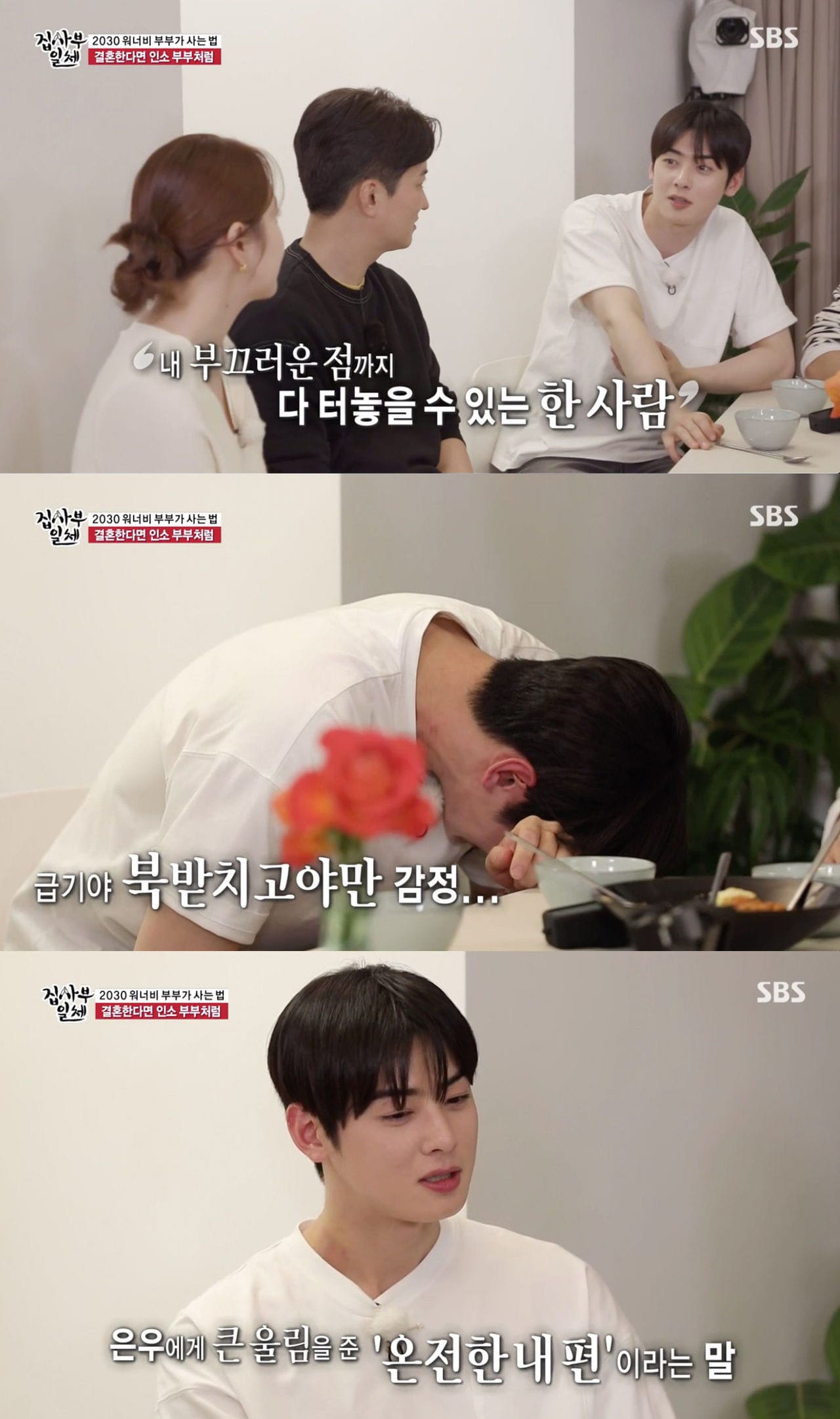 Later in the episode, the cast were asked to write their future wedding invitations. Cha Eun Woo wrote, “On a day when the whole world appeared beautiful and warm, we met the person whom we could trust to be on our side, who can embrace our weaknesses. Hand in hand, we will walk into the future. We are now becoming a married couple.”

ASTRO
In Gyo Jin
Cha Eun Woo
Shin Sung Rok
So Yi Hyun
Master in the House
How does this article make you feel?