“Vincenzo” is a new drama starring Song Joong Ki as Vincenzo Cassano, an Italian lawyer and Mafia consigliere who is of Korean descent, but was adopted by an Italian family at a young age. When he moves back to Korea due to a conflict within his organization, he winds up crossing paths with sharp-tongued lawyer Hong Cha Young (played by Jeon Yeo Bin) and her intern Jang Joon Woo (played by 2PM’s Taecyeon). Together, they join forces in using villainous methods to take down villains who cannot be punished by the court of law.

In the newly released video, the drama’s leading actors take turns personally introducing their characters to the camera.

Song Joong Ki introduces his character Vincenzo Cassano by saying, “He’s a character that’s devilish, cold-blooded, and icy. It’s impossible to know what he’s thinking or feeling on the inside. After only living in Italy for all of his life, he comes to Korea and meets unexpected people. I think it’s a story about [Vincenzo] slowly opening his heart to others, bit by bit.” 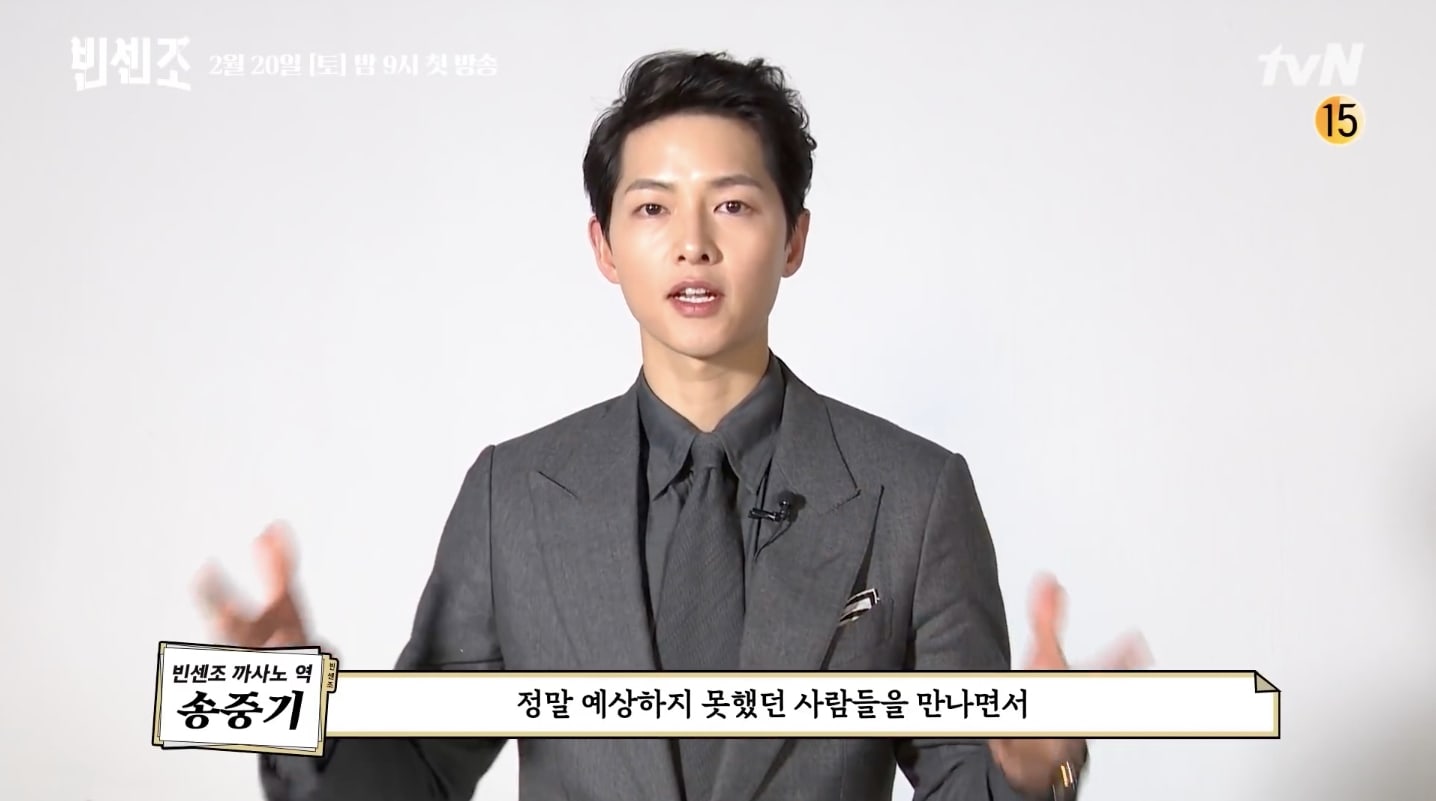 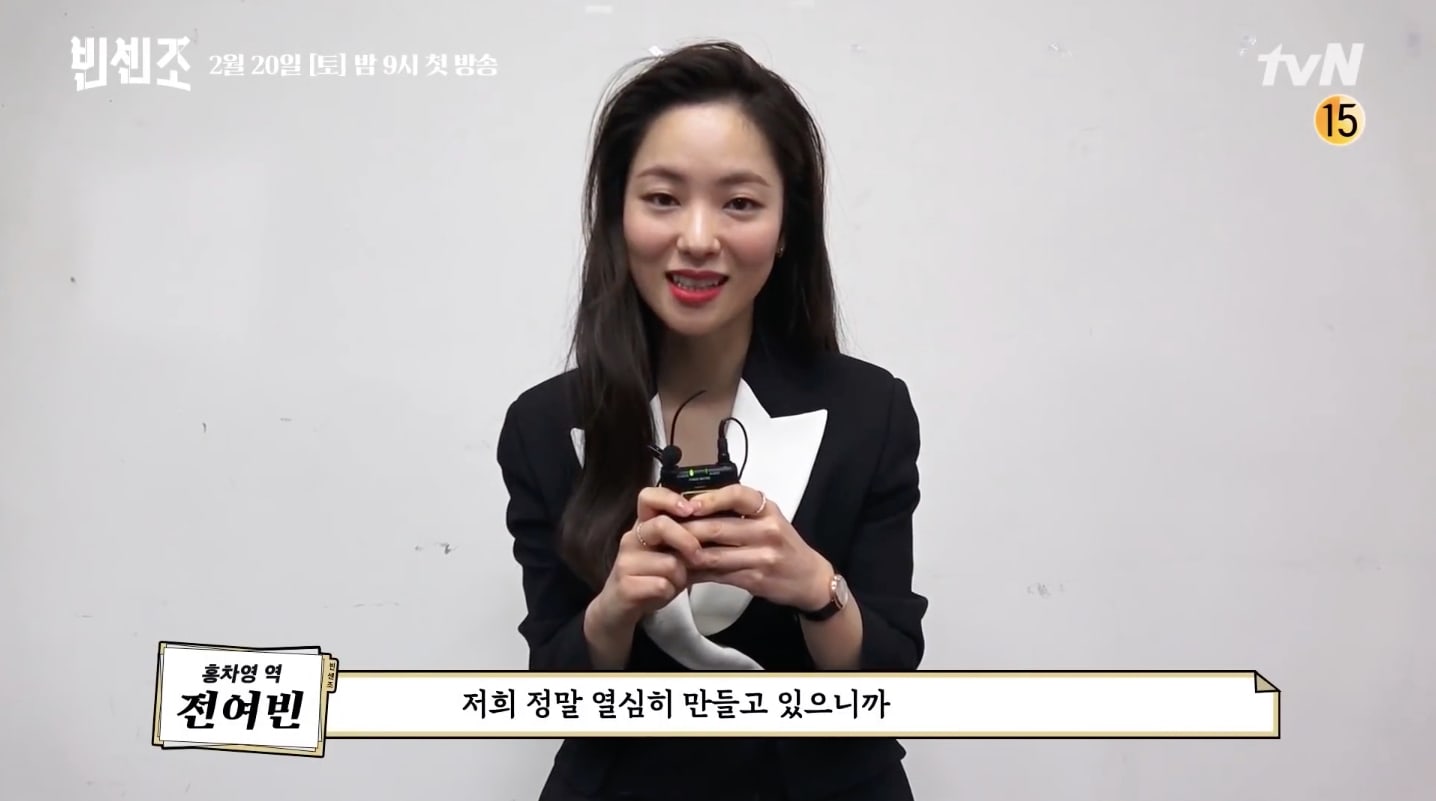 Taecyeon wears a fond smile as he talks about his character Jang Joon Woo, a rookie lawyer at Hong Cha Young’s law firm.

“Joon Woo is a somewhat bumbling character who works hard, with the determination of a newcomer,” says Taecyeon. “He’s interested in Hong Cha Young, who is his mentor and a senior lawyer at his firm. If it’s for Cha Young, he’s ready to become a spy or even James Bond.” 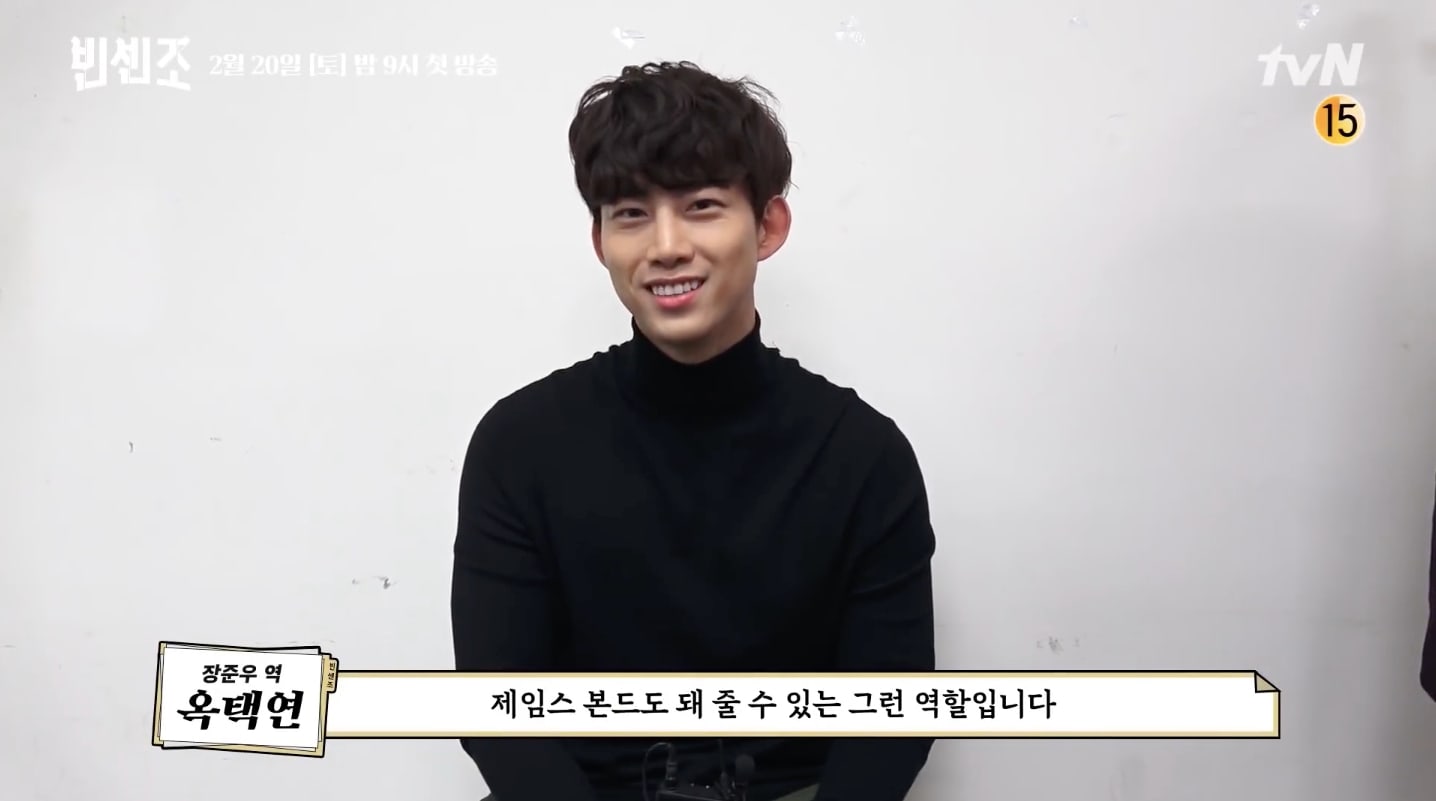 Kim Yeo Jin introduces her character as “lawyer Choi Myung Hee, who is a former prosecutor. She’s willing to resort to any means necessary in order to win, and she’s someone who puts everything on the line for the sake of victory. At times, she can become extremely vicious and cruel.” 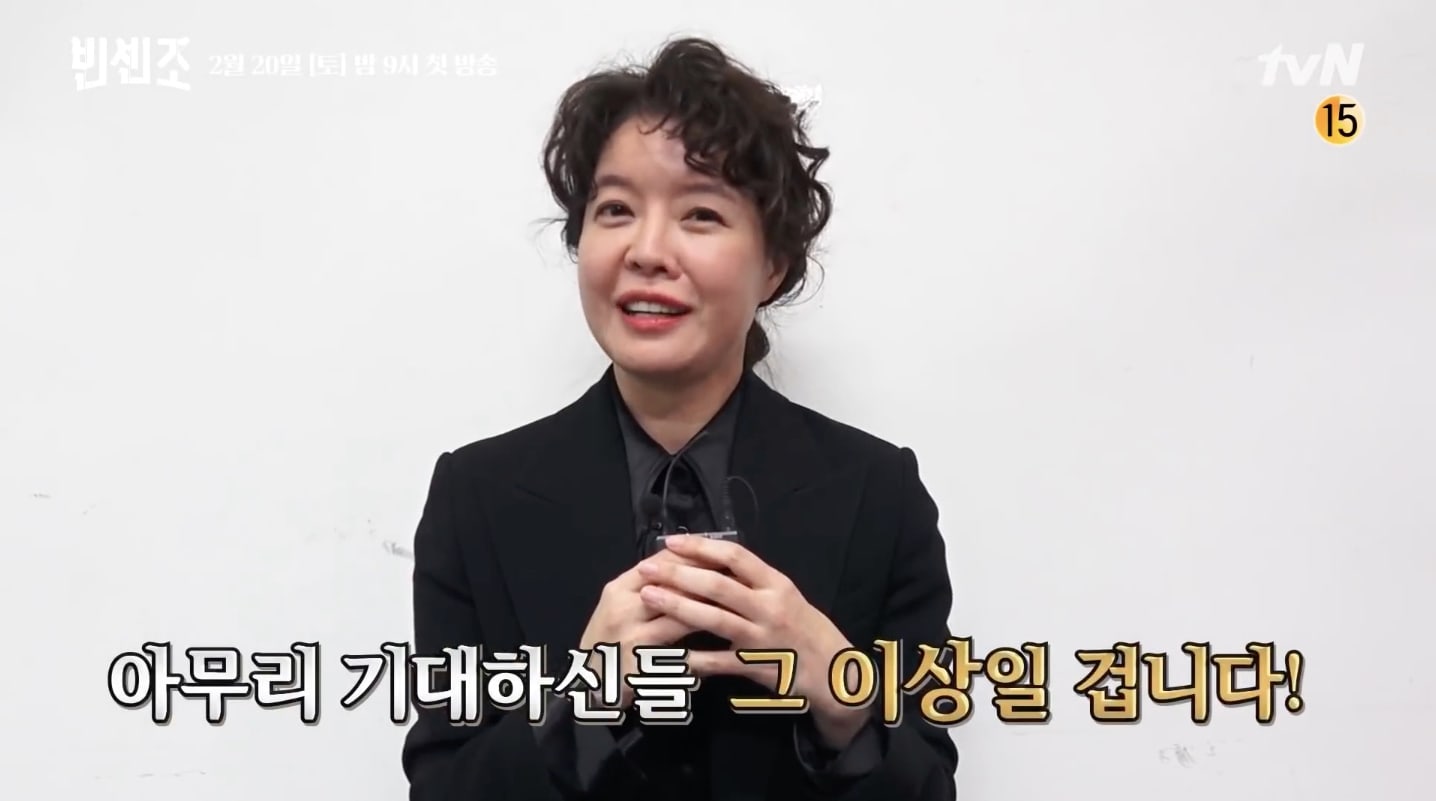 Finally, Kwak Dong Yeon describes his character by teasing, “Jang Han Seo is the president of one of the most prominent companies in South Korea. There are a lot of hidden secrets and stories related to [the character], so I hope you’ll learn about them by watching the drama.” 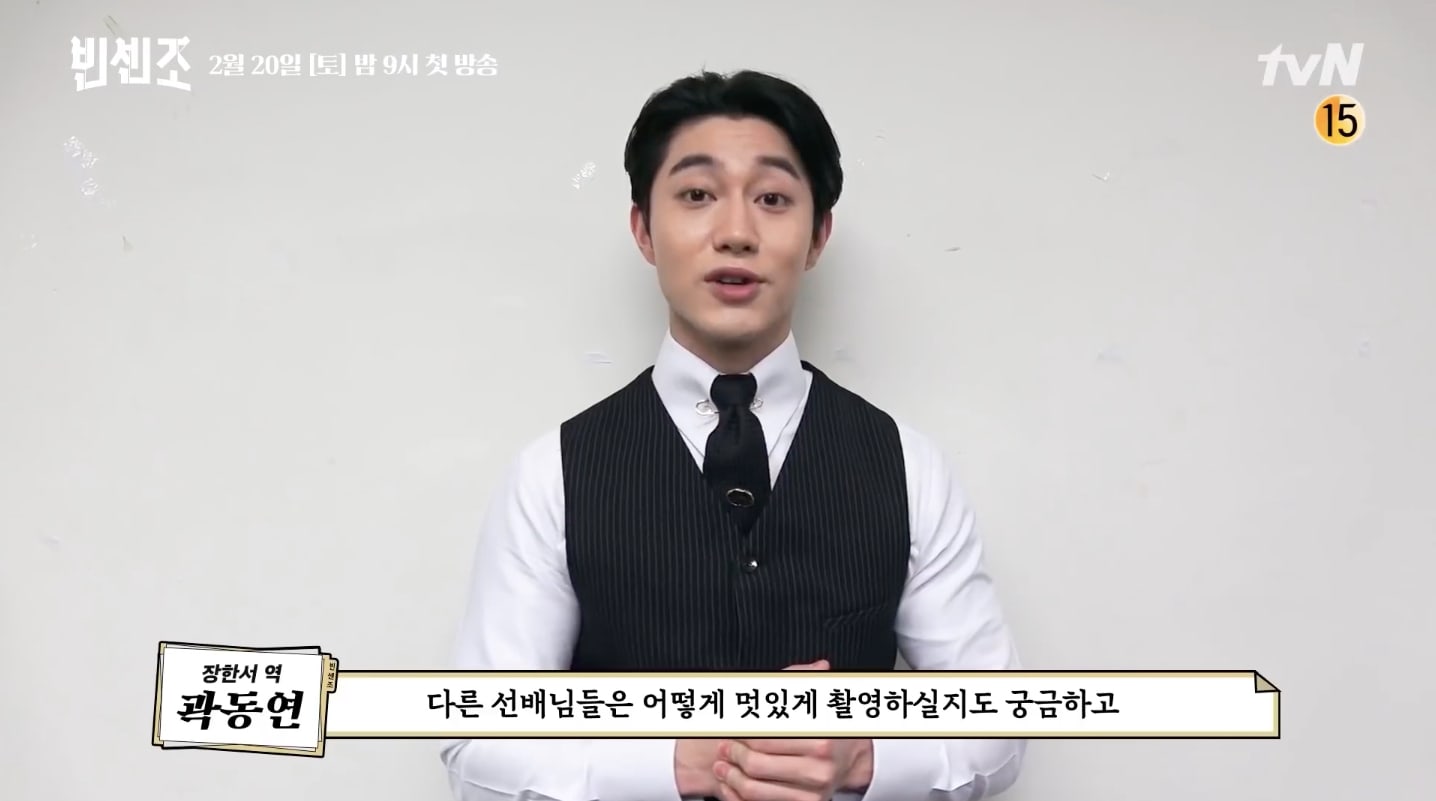 The clip goes on to ask the actors how they felt about the poster shoot, and Song Joong Ki replies, “There are similarities in texture between the poster shoot and our drama.” He later adds, “I think the posters will make it possible for viewers to feel the vibe and tone of ‘Vincenzo’ right away. So I had a lot of fun today.”

Jeon Yeo Bin starts to answer, “I liked it a lot,” before adorably bursting out laughing as she realizes that she’s half-acting like her character from the drama. “Wait a second,” she exclaims, “this isn’t even me or Hong Cha Young—I’m caught somewhere in between! This is so awkward.”

Taecyeon remarks, “I tried hard to do a good job portraying Joon Woo’s childlike innocence and cheerful energy,” while Kim Yeo Jin comments, “Unlike other photo shoots, a poster shoot involves a character. So it felt really similar to acting. I had fun.”

Kwak Dong Yeon shares, “It felt like both a pictorial and a poster shoot. I’m really looking forward to the results, and I’m curious to see how cool the other actors looked in their own shoots.”

The clip ends with the cast asking viewers to tune in to the premiere of “Vincenzo,” which will air on February 20 at 9 p.m. KST. Check out the full behind-the-scenes video below!

While you wait for “Vincenzo,” watch Song Joong Ki in “Descendants of the Sun” here…

…and watch Jeon Yeo Bin in “Melo Is My Nature” here!