Watch: Choi Kang Hee Gains Confidence With The Help Of Lee Re In “Hello, Me!” Teaser Video

“Hello, Me!” shared a highlight video and some new stills as drama fans look forward to the premiere!

The upcoming KBS drama is a fantasy romantic comedy about a 37-year-old woman named Ban Ha Ni (Choi Kang Hee) who has hit a slump in work and love and is visited by her 17-year-old self (Lee Re), who was full of passion and unafraid to take on the world. Kim Young Kwang plays Han Yoo Hyun, a free-spirited second-generation chaebol.

A newly released teaser video begins with 37-year-old Ban Ha Ni, who steps out into the road to pick up her fallen phone and ends up not dodging an oncoming truck. She then wakes up in the hospital, where she’s shocked to meet her 17-year-old self in the bed next to her. The older Ban Ha Ni was working as a sales promoter as a store, where she had to dress up in a squid costume, but she tells someone she’s probably been fired. She’s also been kicked out of her sister’s place, where she was staying.

Meanwhile, the self-assured Han Yoo Hyun has managed to acquire 80 certificates for his various hobbies, and his father tells him that he can’t come home until he starts to earn money properly. He and 37-year-old Ban Ha Ni end up locked up in jail together in opposite cells, and when they meet again later on, he refers to her as his “Jail buddy” and asks her to pay for him. She asks if he doesn’t have money again, and he fakes being greatly injured, holding up his arm with a bandage.

Ban Ha Ni’s younger counterpart is also shocked by what’s happened to her. She’s the queen bee at her high school, so she’s full of confidence and believes she’s the center of the universe. She’s greatly disappointed when she meets her 37-year-old self, who doesn’t stand up for herself when she’s treated unjustly and instead just apologizes. However, the pair begin a project to boost her self-esteem.

Her younger self says, “From now on, don’t cowardly run away or do things that will make you embarrassed. That’s something to feel sorry to me about,” and the teaser hints at a change within 37-year-old Ban Ha Ni. Soon, she’s confronting her boss at the store, leaving him in shock. As she walks away from him with confidence, she narrates, “Today I was really cool for the first time in 20 years.” She’s finally picking herself up again after going through her slump. Han Yoo Hyun beams at her, telling her she’s done a good job and saying “You’re cool!” and the pair give each other a thumbs up.

Ahn So Ni (played by Eum Moon Suk) is a washed-up former top celebrity with a secret in his past, and he walks into the police station like the big star he once was. He’s proud of his performance on set and fishes for compliments over his method acting.

Further scenes include Han Yoo Hyun taking a job at a food station and beaming at 37-year-old Ban Ha Ni as he hands her a lettuce wrap. Her 17-year-old self is confused to find an alarm on her phone that reads “D-100.” “What’s happening in 100 days?” she wonders. 37-year-old Ban Ha Ni says, “If someone comes from the past, how do you send them back?” Her teenaged self cries in her apartment, saying “Then where am I supposed to go?” and her older counterpart comforts her. The pair are told that although they’re two different people, they have the same fortune, and both versions of Ban Ha Ni sleep at night wearing necklaces of garlic.

The production team stated, “The highlight video shows the situations that the four characters deal with and gives a look at their conflicts and solutions.” They added, “Please look forward to the charm of the many genres of ‘Hello, Me!’ which include fantasy, a coming-of-age story, and romantic comedy.”

On February 12, the show also shared still photos of 37-year-old Ban Ha Ni on a blind date at a restaurant in a fancy hotel. It’s her first date in a while and she’s bought new clothes and is trying to look good for the occasion. Her date is someone who’s been introduced to her by her older sister, Ban Ha Young (Jeong Yi Rang), who’s the director of a plastic surgery department. It’s said that he has expensive tastes and a strong personality, and it will be a date that Ban Ha Ni won’t ever forget.

The production team stated, “Ha Ni is going through a slump in her life, and she goes on a blind date after the persistent urging of her sister. She experiences a series of funny yet sad situations, from the moment she meets her date, who has a strong personality, until they part ways. Although it’s portrayed in a comedic way, it will be a sad story in which Ban Ha Ni’s self-esteem is shaken once again.” 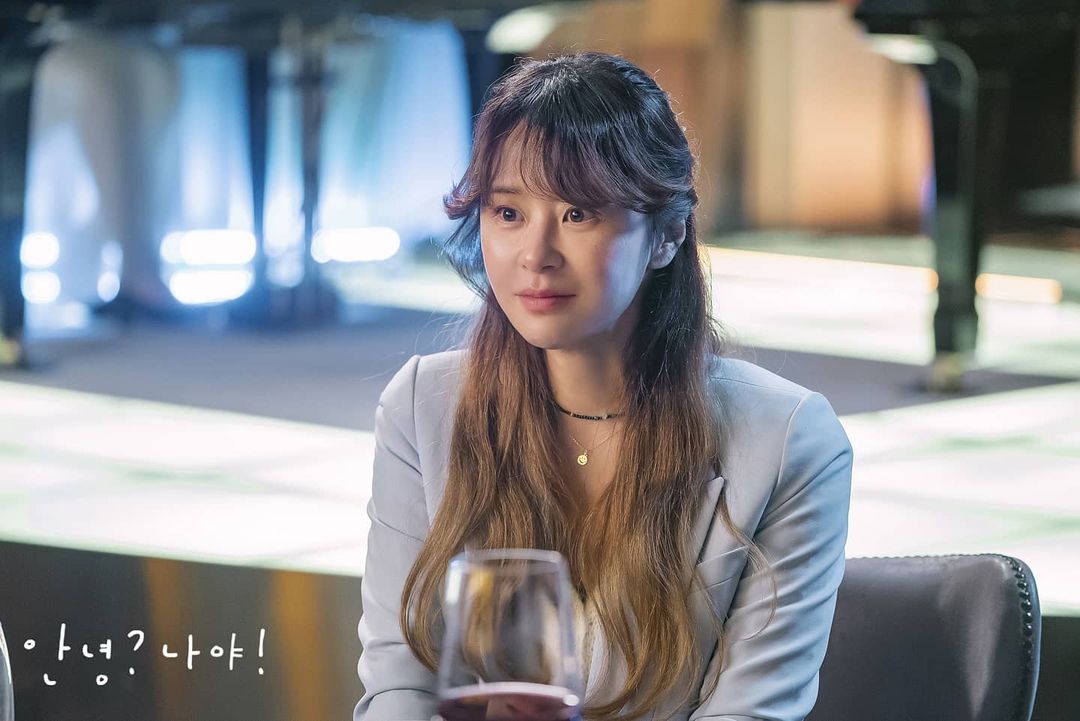 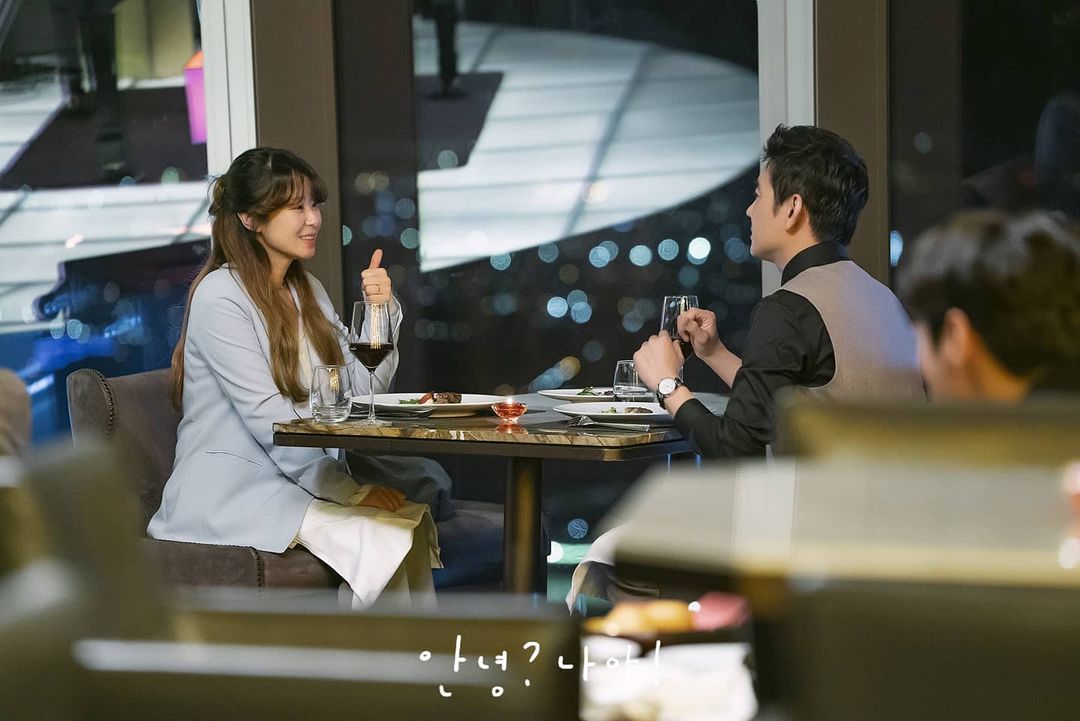 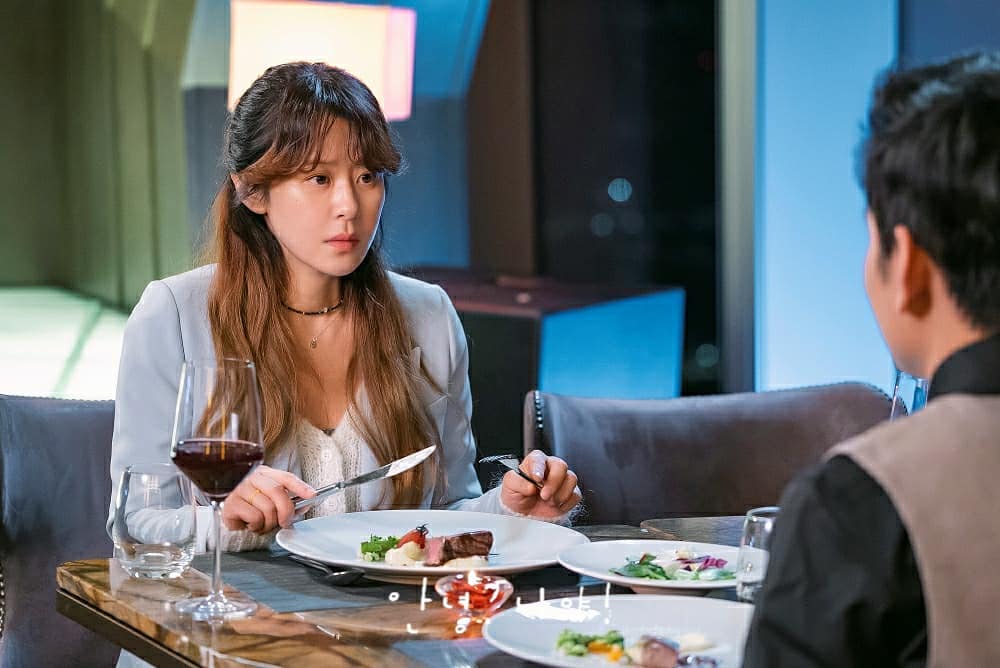