Watch: SF9’s Rowoon And Won Jin Ah Show Off Playful Chemistry Behind The Scenes Of “She Would Never Know”

JTBC’s “She Would Never Know” shared a behind-the-scenes look at some emotional scenes in the drama!

The new making-of video kicks off outside a convenience store, where Rowoon’s character tells Yoon Song Ah’s character that he will let go of his feelings for her. As they discuss the details of the scene with the director, he suggests that Rowoon make a pitiful face. Rowoon obliges by making an exaggerated pouting expression, which makes Won Jin Ah break into a smile next to him.

As they sit in front of bowls of instant noodles, Rowoon tries to convince the staff to wait just two more minutes so his noodles will become chewier and easier to eat, and jokingly complains when his attempt fails. After filming begins, the pair instantly transform into their roles, but a sudden gust of snow cuts the emotive scene short. Won Jin Ah begins to sing a line about snow from IU’s “Merry Christmas in Advance” while making a silly face at Rowoon, but stops and asks him, “Is that a gun?” before pretending to be shot in the chest. 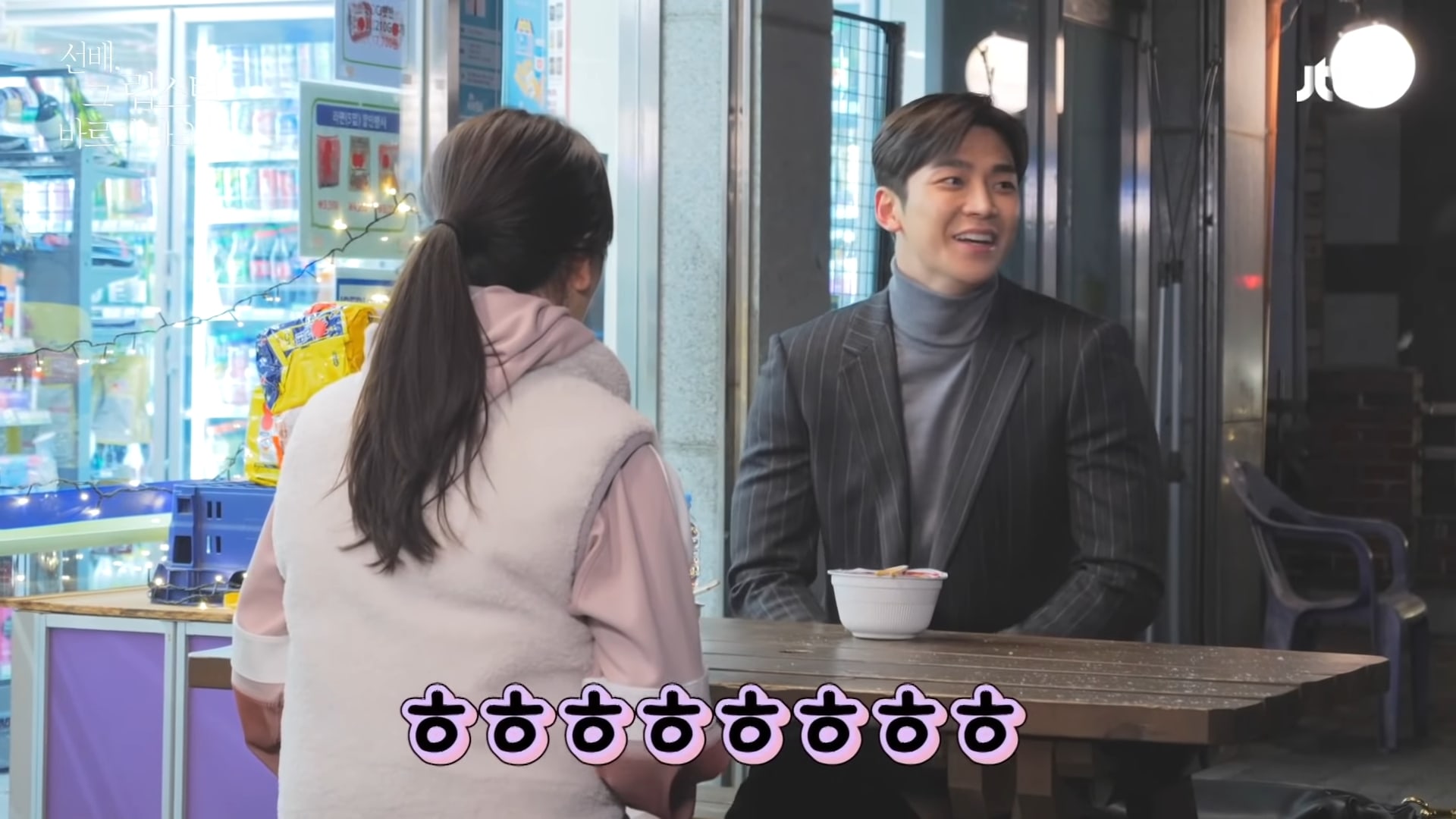 The actors then move inside, where they rehearse for an awkward scene inside a lecture hall. The director narrates, “He sits in the most pitiful way in the entire world,” prompting Rowoon to hunch over with a smile. Won Jin Ah has trouble with her line, “Don’t go,” and keeps laughing as she faces Rowoon, who advises her, “You need to hold it in.” After she reaches toward Rowoon, the director jokingly models the action in a more desperate manner, making Rowoon lean back in his chair. Won Jin Ah asserts, “I can even do it while sitting down,” and moves to sit on the table next to him. Rowoon reacts by getting up with a sound of discomfort, and the surrounding staff burst into laughter.

Once filming begins, the scene goes well until Won Jin Ah approaches Rowoon, where she closes her eyes in an attempt to stifle her laugh. During the second take, she begins laughing as she says, “Don’t go,” and after numerous apologies she finally makes it through her difficult lines. After finishing the scene, Rowoon jokingly says, “That’s 10,000 won (approximately $9.05),” supposedly having made a bet on whether or not Won Jin Ah would laugh during the scene. He offers to shake Won Jin Ah’s hand, but she playfully hits his hand instead. Rowoon later gets his revenge by flicking the back of her hand as he walks by.

“She Would Never Know” airs every Monday and Tuesday at 9 p.m. KST.

In the meantime, watch Rowoon in “Extraordinary You” here:

Also check out Won Jin Ah in “Melting Me Softly” below: