On February 16, OCN’s newest drama “Times” held an online press conference ahead of its premiere!

“Times” is a “time-warp” political mystery drama about Seo Jung In (Lee Joo Young), the daughter of South Korean president Seo Gi Tae (Kim Young Chul). After miraculously communicating with journalist Lee Jin Woo (Lee Seo Jin) from five years in the past by phone call, Seo Jung In attempts to prevent the death of her father—but stumbles upon a dangerous truth in the process.

Director Yoon Jong Ho shared, “‘Times’ tells two stories, one about the lies that those with power create, and one about uncovering the truth. This is a new genre that combines the tight timeline of time-warp with a political mystery. As it’s a new genre, we want to deliver a new kind of fun.”

Lee Seo Jin stars as Lee Jin Woo, a journalist from five years in the past. Regarding his character, the actor commented, “Lee Jin Woo lives without thinking deeply but is a journalist who only moves forward to achieve his goal. He becomes entangled in the issue after receiving a call from the future.”

This is Lee Seo Jin’s first drama in two years after last appearing in OCN’s “Trap.” He joked, “It’s not because I like OCN or anything, I just like genre projects.” He spoke about the influence Kim Young Chul’s appearance had on his decision to join the drama, sharing, “During our meeting, they said that Kim Young Chul would be portraying the president. Since he’s a senior actor that I really like and respect, I thought that I’d at least get to see him often if we got to work together. Because they said Kim Young Chul was joining, I decided to join too.”

Lee Joo Young stars as reporter Seo Jung In, the daughter of president Seo Gi Tae. One day she is shocked to wake up and discover that her father died four years ago while campaigning for the presidential election and she is now working at Daily Search.

She spoke about starring in her first lead drama role, sharing, “It’s true that when we started, I had concerns over whether I’d be able to do well. Director Yoon Jong Ho and my senior actors believed in me and helped me succeed. Thankfully I am doing well.”

When asked what keyword she would like attached to her name for this drama, Lee Joo Young answered, “Since it’s my first time starring in a 12-episode drama, if I just hear that I am an actress who was able to smoothly reach the end, I couldn’t ask for more.” 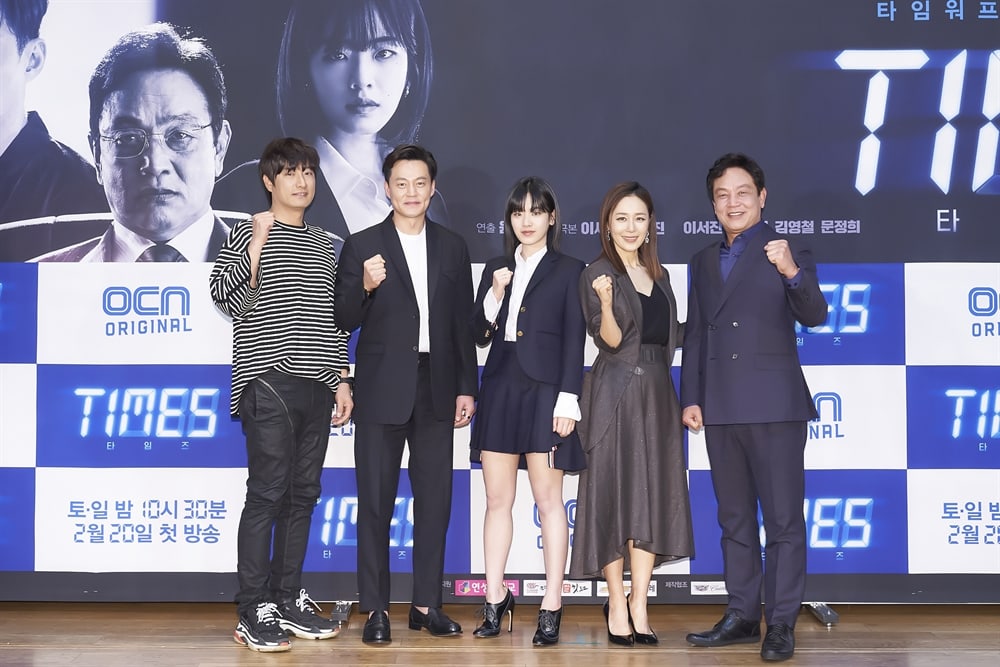 Lee Seo Jin surprisingly revealed, “There are rarely any times we actually meet. Instead of my chemistry with Joo Young, I had to work well and act with the floor director (FD) who did Joo Young’s voice for me.” Lee Joo Young jokingly responded, “Their acting gradually got better.”

He continued, “A king and president share the similarity of running a country but I believe that as the president, I needed to be charismatic, friendly, and confident.” He jokingly added, “That’s why I showed them my natural image. Am I not an actor with charisma, friendliness, and confidence?”

Moon Jung Hee plays Kim Young Joo, a member of Congress and the next presidential candidate. She commented, “Kim Young Joo is a cold and calculative person. Although you could not see a lot of her in the teaser, there is a reason why you cannot see her.”

Kim Young Chul shared that he predicted viewership ratings of 13 percent for “Times” and shared, “If we get 13 percent, I’ll give four dollars to 1,000 people. I’ll do it out of my own pocket.” His ratings promise is a reference to his famous line “Four dollars!” from the drama “Rustic Period.”