The pair managed a supermarket located in the province of Gangwon, and the market includes everything its customers could want, including a hardware store. “I wondered if such a store might still exist today, but the place that we went to was such a good fit that it was fun and felt fresh and new,” said Cha Tae Hyun. “I think it’s entertaining in a fresh way, to the point that young people will watch it and say, ‘What’s that?'” He added with a laugh, “Although I did worry because young people these days might not know who we are.”

Jo In Sung shared the reason that he decided to be a fixed cast member on a variety show for the first time. “There’s a movie that I’ve filmed, but due to the COVID-19 pandemic, I’ve had to greet fans later than I’d wanted,” he said. “I usually try to do one project each year, but since it’s gone on longer, I was wondering if there was a way that I could greet my fans comfortably. Then I happened to be talking to Tae Hyun, and he suggested that we give it a shot. I thought that I could go for it if I were doing it with him.”

Cha Tae Hyun and Jo In Sung are known as close friends, and Cha Tae Hyun said about the actor, “I think everyone will be surprised when they watch. He does all sorts of things, including slapstick and old-fashioned jokes. It’s incredible.” On Cha Tae Hyun, Jo In Sung said, “He’s definitely different. I haven’t been on variety shows much, so when I saw the way Tae Hyun acts on variety, I admired him a lot.” 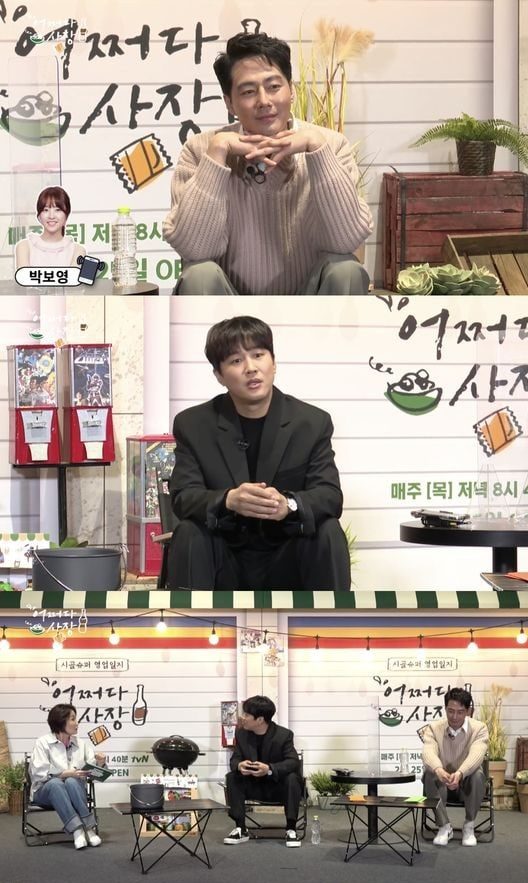 The pair shared that Cha Tae Hyun had been manning the checkout counter at the store while Jo In Sung had been in charge of food. While Jo In Sung insisted that he hadn’t done much actual cooking, Cha Tae Hyun said that he’d become well known as “Chef Jo.” He added, “His main dish was snow crab ramyun. All of the food that In Sung made was a hit.”

On the possibility of a second season, Cha Tae Hyun commented that lately shows tend to have multiple seasons if they do well. When asked if he’d want to work with Jo In Sung again on a potential next season, Cha Tae Hyun said he’d bring him. He then made everyone laugh when he said, “But to give a bit of a spoiler, he said at the end that he couldn’t do it with this format. We’d have to change the format a bit.”

Park Bo Young was the first guest to join the pair to film the show, and she took part in the live broadcast via a phone call and cheered the pair on. “To be honest, at first they contacted me and told me to come have a meal and then leave,” she said. “But then it was a part-time job. I was surprised because there was no cash register or anything like that.” Jo In Sung said, “Bo Young had the hardest time.”

“It was difficult but I had fun,” said Park Bo Young. “At the same time, I was worried about whether I was doing a good job at making it entertaining, since the show needs to be fun. I really did my best at the work.” She added, “I did laugh too but I also felt touched. I think when you all watch it, you’ll experience a lot feelings. There are many guests, not just me, so please show the program a lot of love.”

Lastly, Cha Tae Hyun said, “There’s something that I’m personally looking forward to. Variety shows usually have a one-off aspect to them. But I think ‘Unexpected Business’ is like one big project. If you watch from the first episode to the finale, you’ll see people make repeated appearances. We develop relationships, and a completely unexpected situation occurs in the end. It was like a drama without a script. I think it’s really a kind of variety show that’s never existed before.”

Jo In Sung shared, “I’m not sure what the program will be like, but I think we did it honestly. Sometimes I wondered if it was a variety show or a human documentary, and sometimes it seemed like a drama or movie too. It’s a project that has a lot of different genres and feelings to it.”