Watch: MONSTA X Members Play Among Us With Super Junior’s Shindong And “Ask Us Anything” Members

In the latest installment of Lee Soo Geun and Seo Jang Hoon‘s “Ask Us Anything” spin-off, MONSTA X’s Minhyuk, Hyungwon, and Joohoney taught the stars how to play Among Us!

On February 20, JTBC released a new episode of Lee Soo Geun and Seo Jang Hoon’s eSports-themed spin-off project for their hit variety show “Ask Us Anything.” After learning how to play KartRider from NCT‘s Jungwoo, Jeno, and Chenle last month, the two men tackled the popular game Among Us in this week’s show.

Together with Super Junior’s Shindong, MONSTA X members Minhyuk, Hyungwon, and Joohoney gave Lee Soo Geun and Seo Jang Hoon a private lesson on Among Us—followed by a few amusingly chaotic rounds of the game.

The members started out by explaining their IDs for the game. Hyungwon, who chose the color black, shared, “There’s an ID I use a lot—’Cheongdam Water Strider.’ Because I have thin, long arms and legs.” Joohoney, who chose white, dubbed himself “Poppin’ Ho Joon”: a reference to his birth name “Ho Joon” and the famous singer “Poppin’ Hyun Joon.” Finally, Minhyuk, who picked yellow, named himself the “Dongdaemun Banana.” 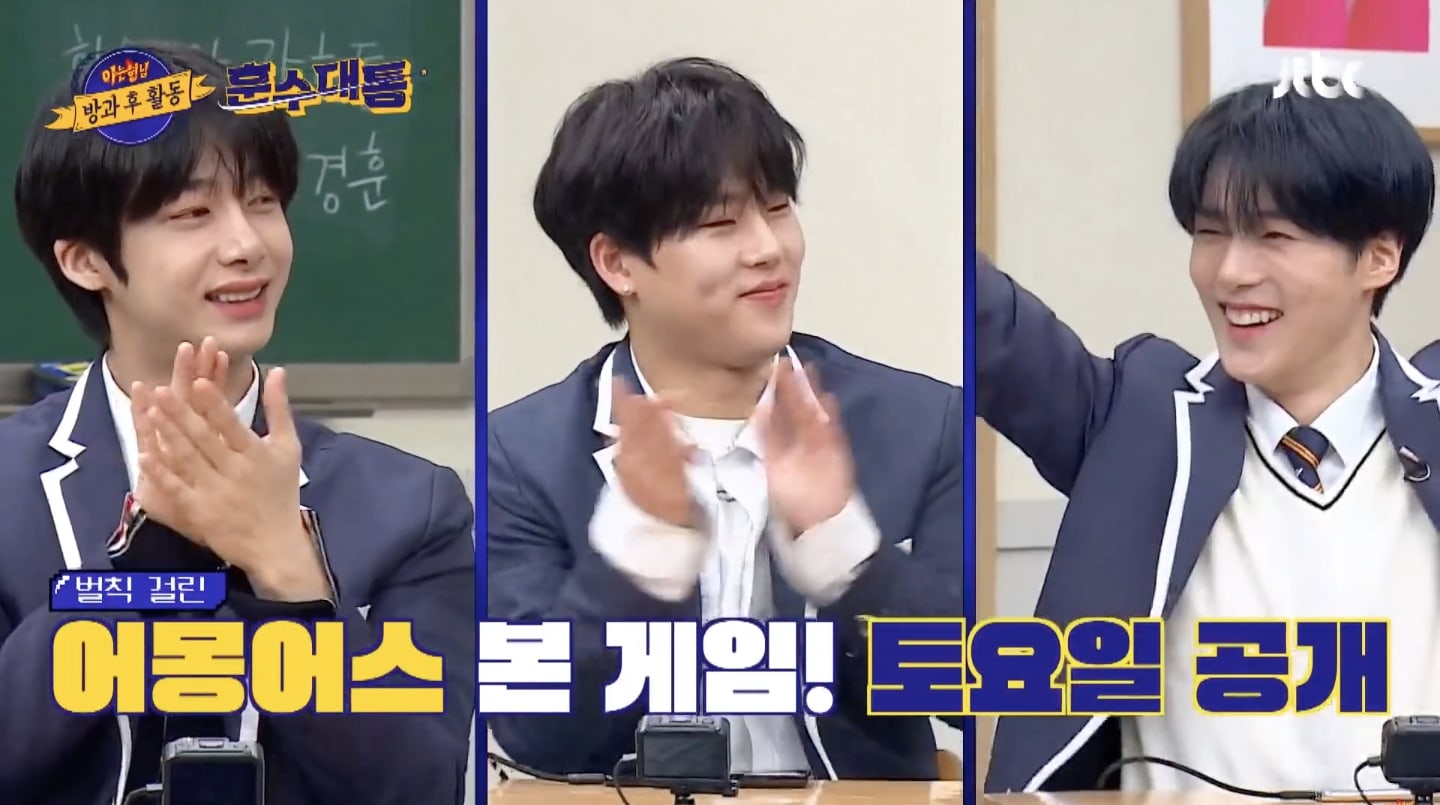 After teaching the “Ask Us Anything” members the basics, the six stars jumped into their first round of the game. Seo Jang Hoon cracked up the other players by hilariously struggling with almost every aspect of the game, from the tasks to even figuring out whether or not he was still alive.

In the first round, Joohoney, Shindong, and Seo Jang Hoon were the last players to survive. Both Joohoney and Shindong heatedly urged Seo Jang Hoon to vote for the other, even getting up from their seats and crowding around the basketball star as they delivered their impassioned pleas. Lee Soo Geun laughed, “Who comes over to talk to someone while playing an online game?”

Ultimately, Minhyuk had to break up the argument by telling both Joohoney and Shindong to sit down, and impostor Joohoney won the game by convincing Seo Jang Hoon to vote for innocent crewmate Shindong. 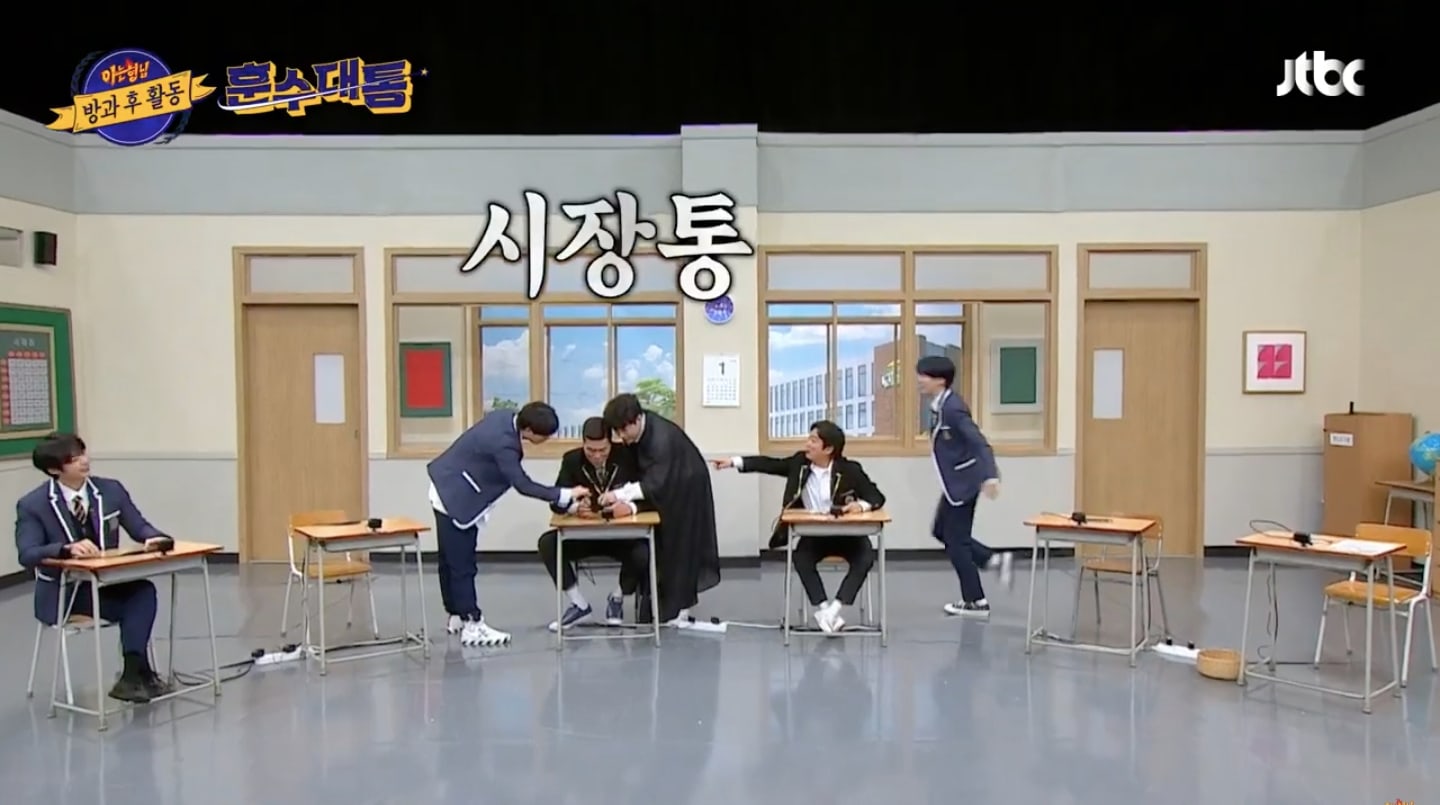 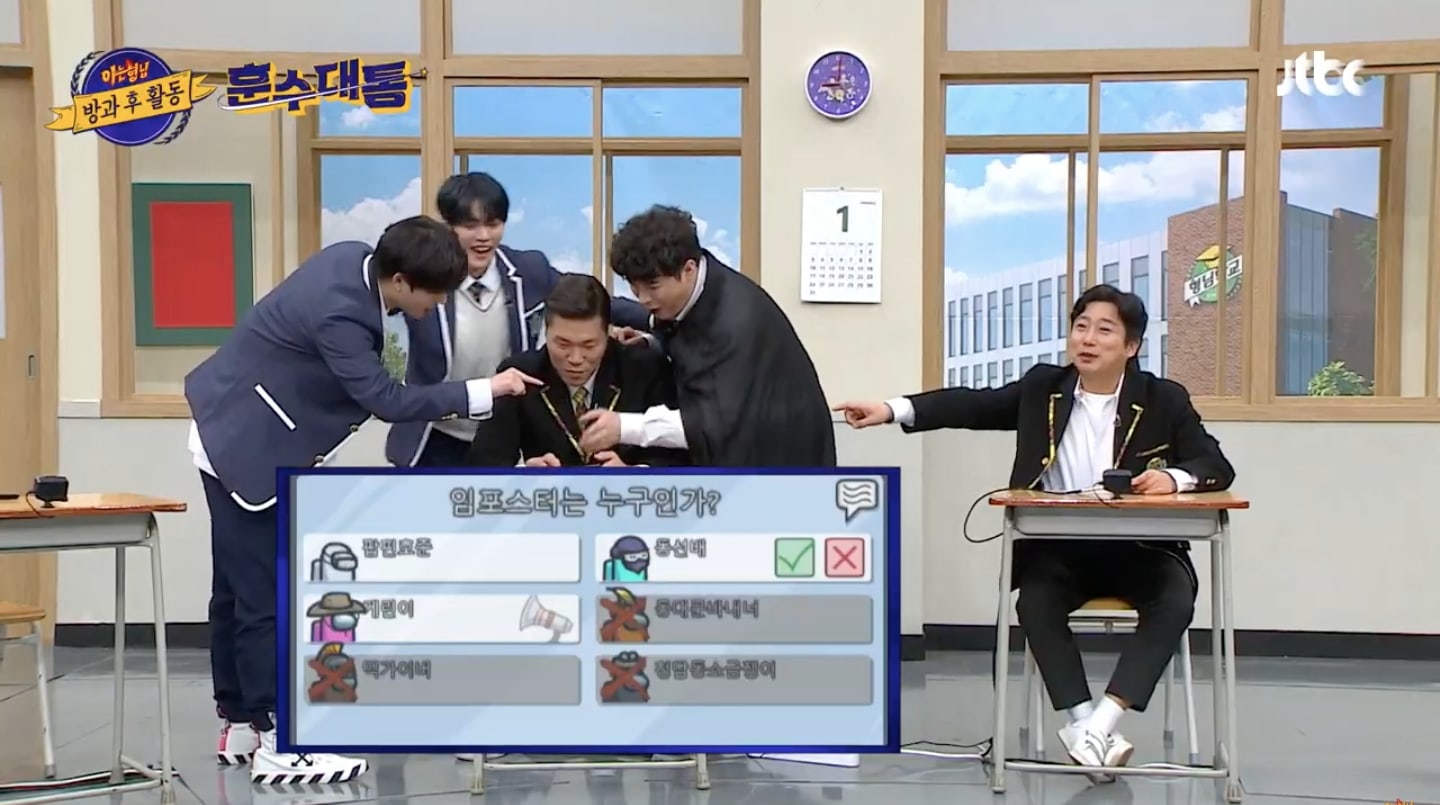 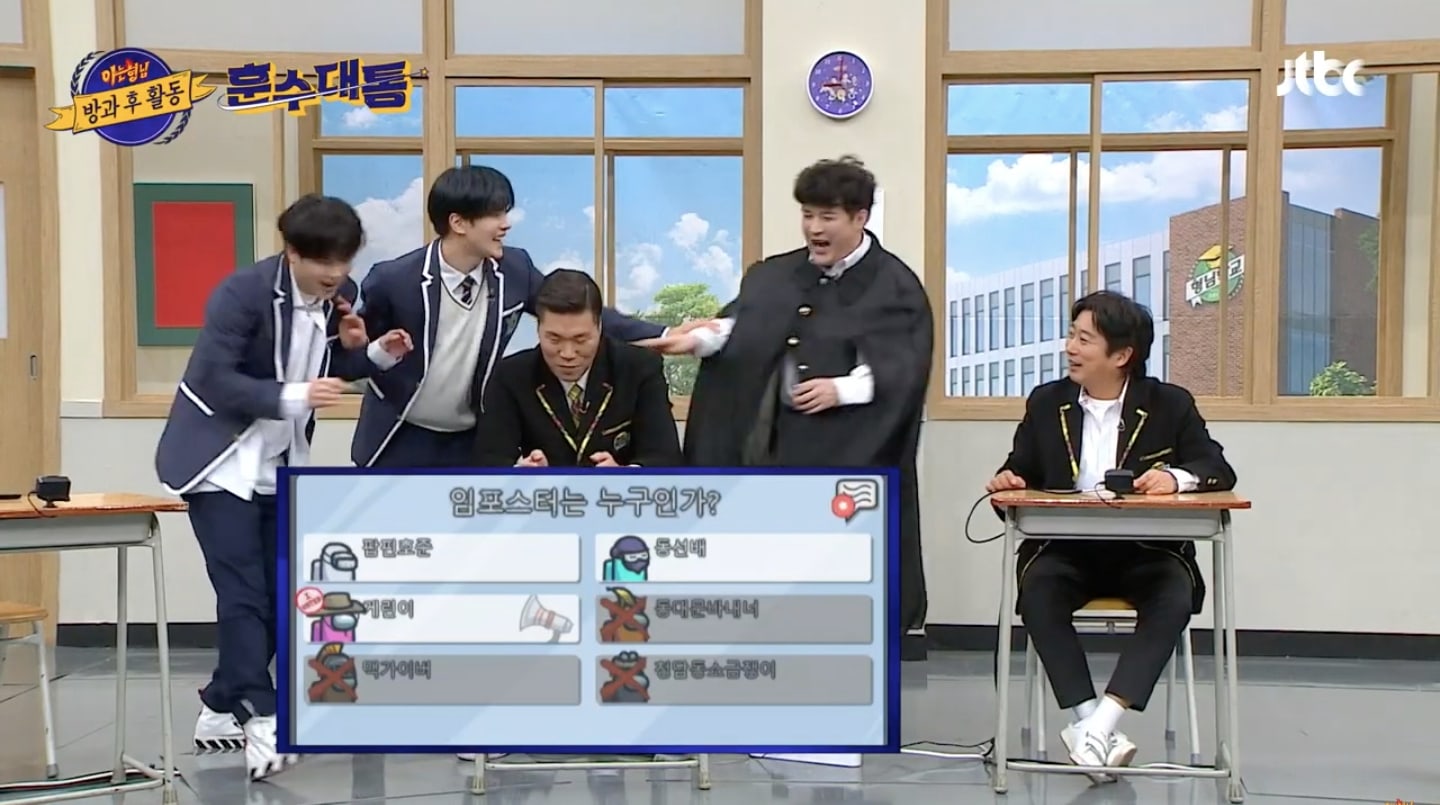 In the next round, Seo Jang Hoon finally got the hang of things as he successfully figured out how to do his tasks. However, that amusingly became all he was interested in, and even when bodies were reported, he fervently insisted that they skip voting so he could get back to his assigned tasks as quickly as possible.

After getting away with killing his bandmates Hyungwon and Joohoney, impostor Minhyuk was nearly caught red-handed when Lee Soo Geun walked up just as he attacked Shindong.

However, to the bewilderment of all three ghosts, Lee Soo Geun was oblivious to what he had witnessed, repeatedly walking past Shindong’s body without noticing it as Minhyuk waited out his kill cooldown. 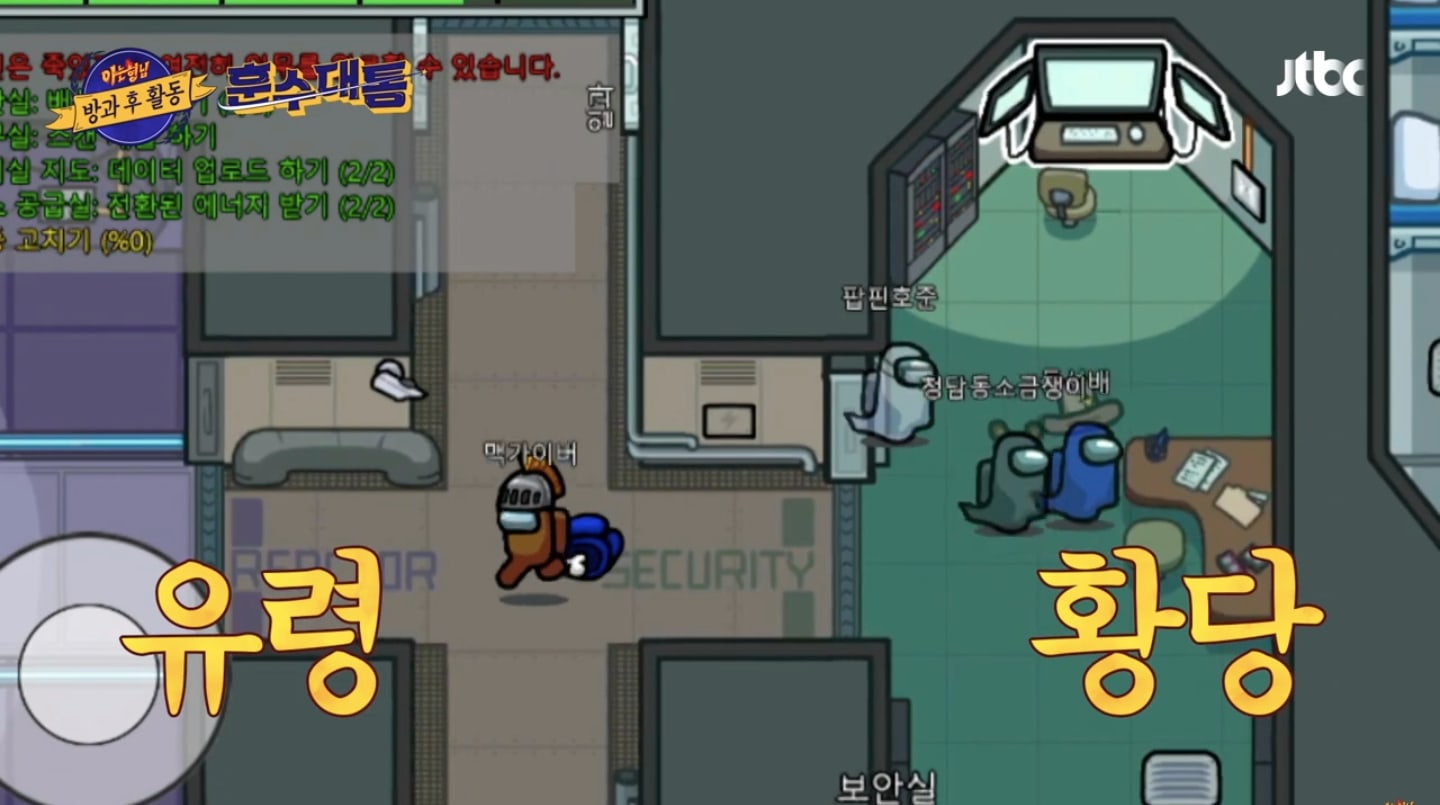 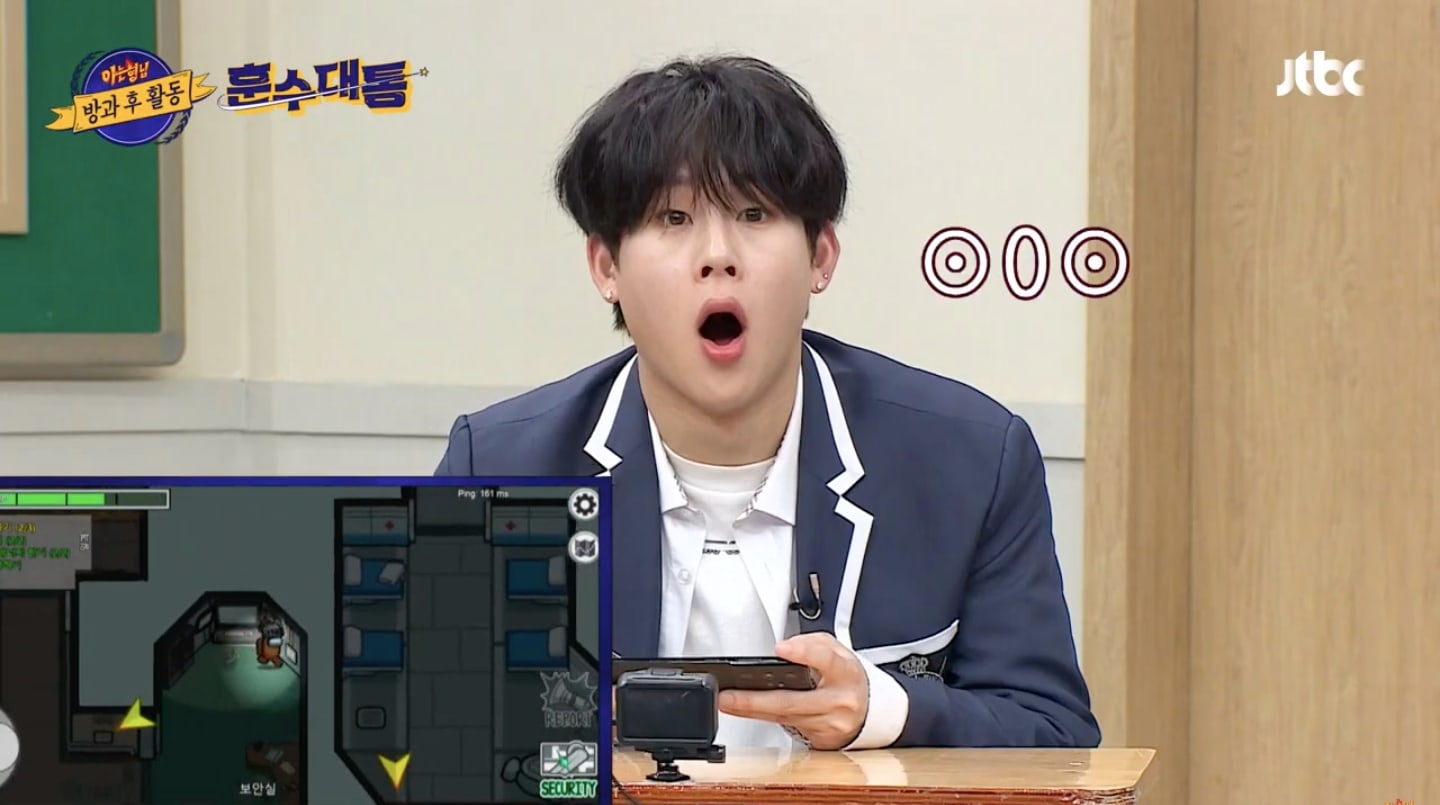 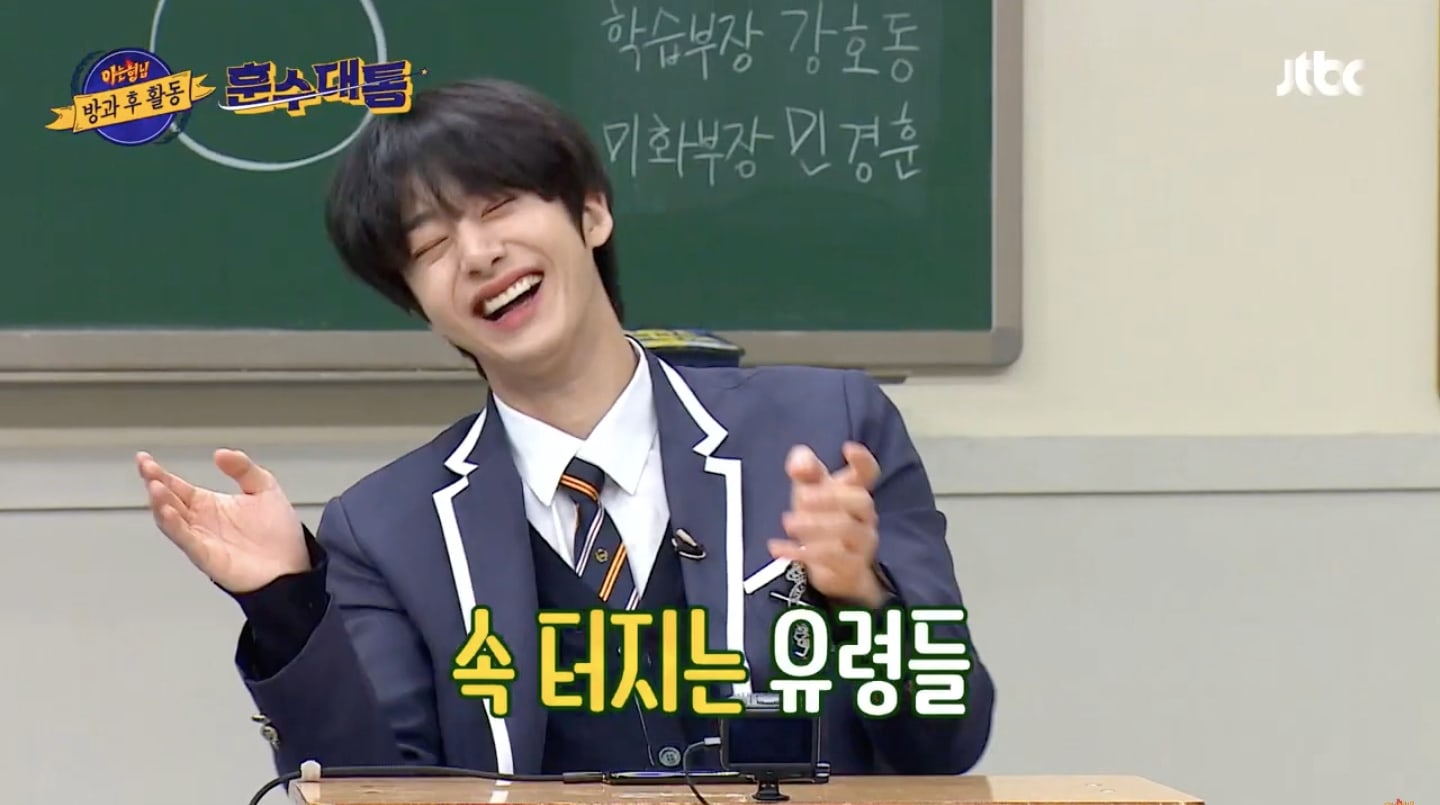 In the end, just as Lee Soo Geun finally realized there was a body in the room and attempted to report it, Minhyuk snuck up on him and won the game.