Watch: SF9’s Rowoon And Won Jin Ah Enjoy A Cozy Camping Date Behind The Scenes Of “She Would Never Know”

JTBC’s “She Would Never Know” released another behind-the-scenes look at the drama!

The making-of video focuses on the most recent episode where Yoon Song Ah and Chae Hyun Seung go camping together. Won Jin Ah and Rowoon share a laugh as they prepare to set up the tent, and after Rowoon comments that Won Jin Ah has gone camping before, she jokingly responds, “Of course, I’m a camping expert! I went camping once. I have a tent at home.” Rowoon replies, “If you have a tent that makes you an expert.”

Won Jin Ah continues with her act as she pretends to show Rowoon how to insert the tent poles into the fabric. When Rowoon points out that the whole tent is collapsing, she stands up and says, “Go find a hotel near here,” and Rowoon runs off into the distance as if he is following her orders. 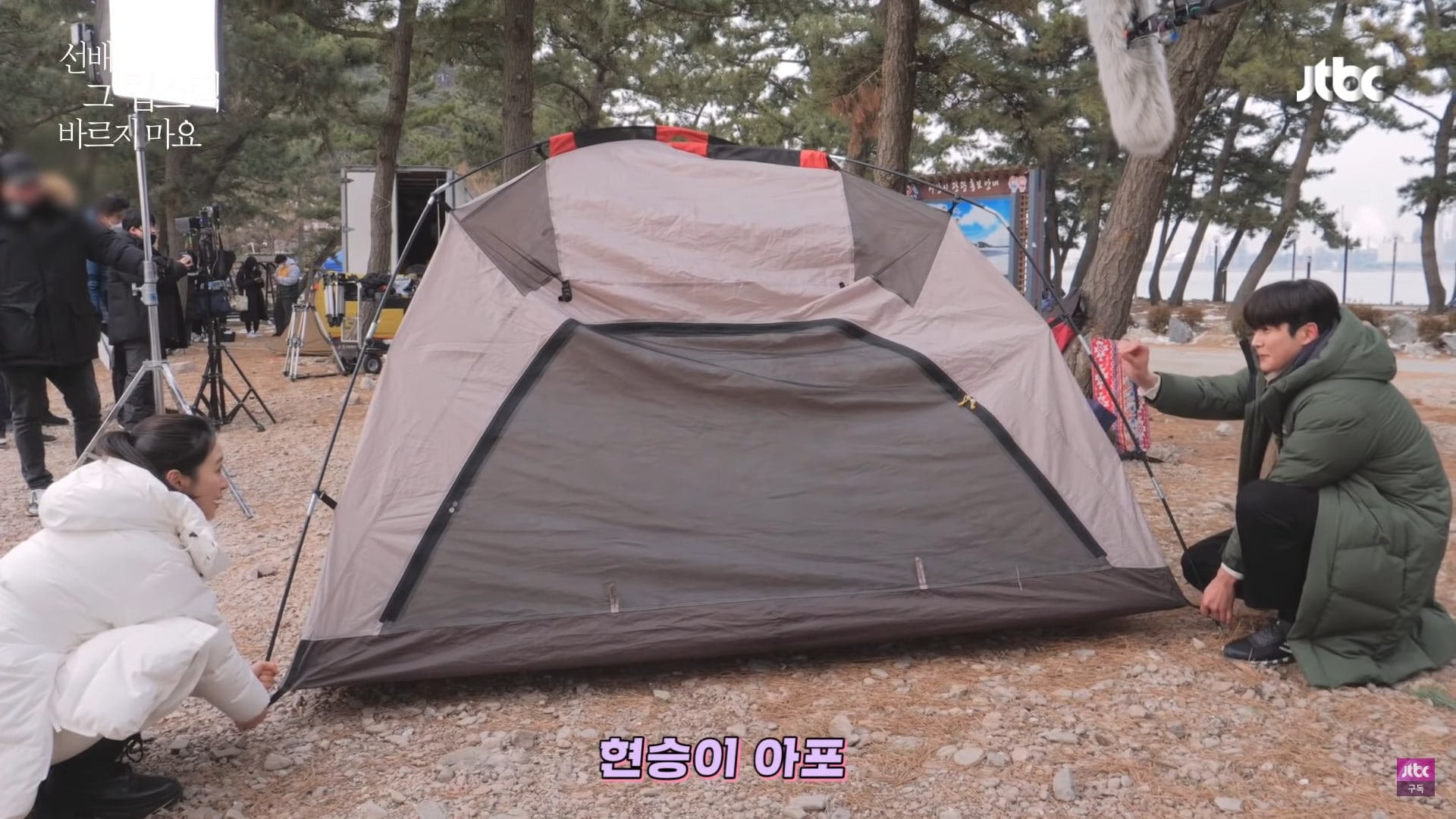 When asked if he has gone camping in a car before, Rowoon says that it’s difficult to sleep in cars due to his height, saying, “It’s hard to sleep in anything smaller than a large van, since I’m 189.7 centimeters (approximately 6 feet 3 inches) tall.” In another scene where the director rehearses together with Rowoon to show him to how get close to Won Jin Ah, Rowoon laughs in embarrassment when the director stops right in front of his face. During filming Won Jin Ah teasingly pushes him over, and true to his character he mumbles to himself, “She’s short but she’s strong, got it.”

Won Jin Ah and Rowoon also have fun lighting a campfire, staring in awe as the wood catches on fire. As they begin filming and immerse themselves in their characters, Won Jin Ah turns to Rowoon and says, “This is my first time seeing something like this,” to which Rowoon replies in astonishment, “For the first time? You’re seeing fire for the first time?” During another take, he asks her if she enjoys setting fires before wittily adding, “You set a fire in my heart.” After the scene cuts, Won Jin Ah asks with an astonished smile, “What was that?” 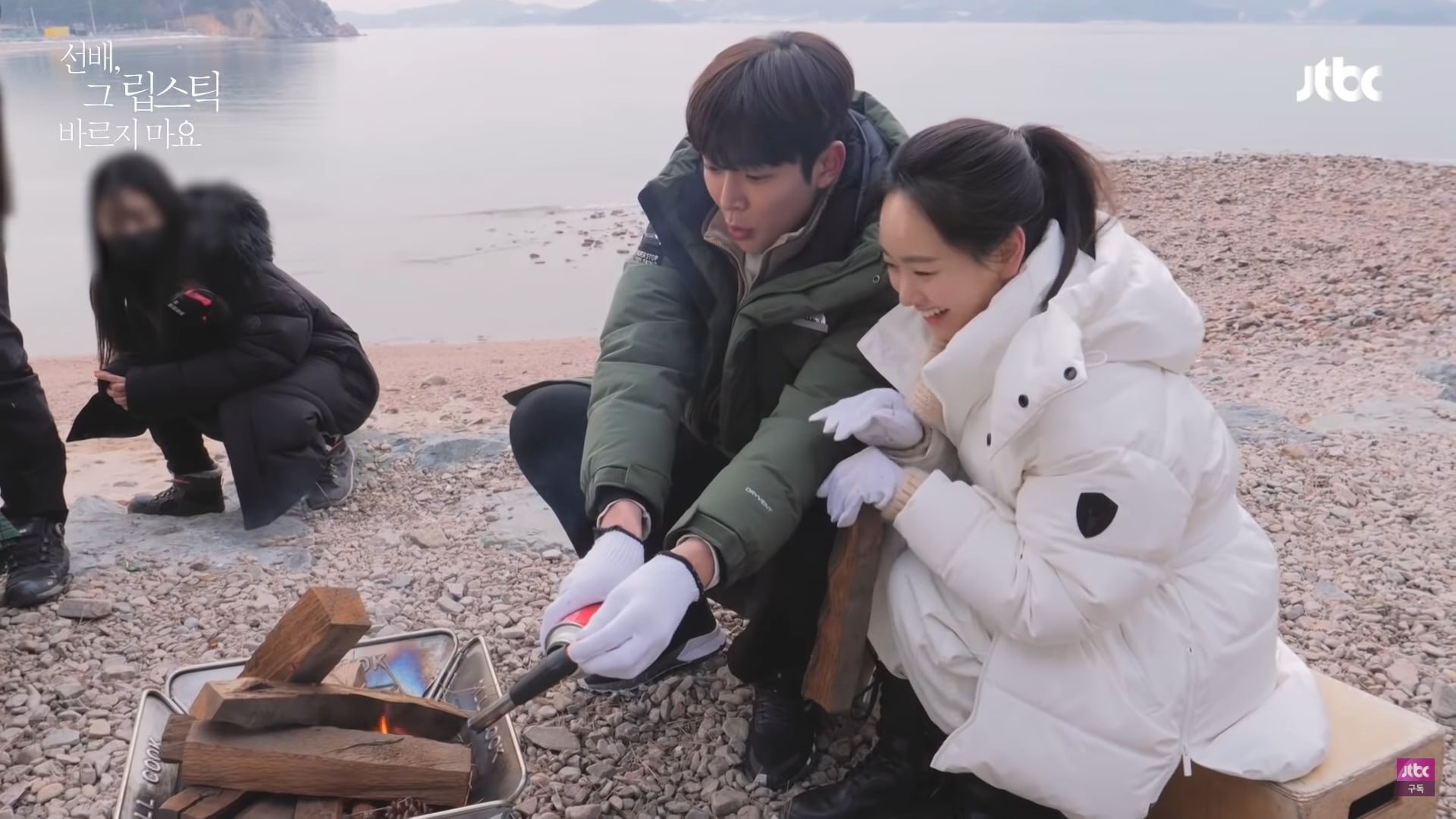 Rowoon engages in more friendly banter with the director, who asks him if he is good at skipping stones. Rowoon replies with a casual voice, “Argentina told me the one I threw earlier made it there.” Unimpressed with his comment, the director walks away, and Rowoon mutters, “Ah, that fell flat.” Rowoon then practices skipping stones across the water, and Won Jin Ah stands up to cheer him on, impressed with his skills.

Later on, Rowoon and Won Jin Ah film a scene where their characters walk together along the rocky shore, and Rowoon cries foul when she accidentally steps on his foot. Pretending to limp, he says, “I lost feeling in my foot.” Fulfilling her role as a tough older colleague, Won Jin Ah replies, “Don’t lie. Come on,” and the pair continue walking.

Check out Rowoon in his drama “Extraordinary You” below: