SHINee’s Minho Talks About His Life In The Military, Friendship With TVXQ’s Changmin, And More

SHINee’s Minho appeared as a guest on the February 23 episode of KBS’s “Problem Child in House.

On the show, the MCs asked him about his military service in the Marine Corps. He said, “I’m the type that likes a challenge. I knew it would be difficult, but since I had to go to the military anyway, I wanted to experience the challenge.”

He added that he had not taken his final leave, explaining, “Breaks are the highlight of military life, but because of COVID-19, there were no longer breaks. Instead, we would be discharged early on our final leave. But if you get discharged early without returning to the base, you won’t be able to participate in the national drill. I really wanted to do that drill. But about 30 minutes after the march began, I regretted it. I thought, ‘I should have gone home.’ None of my peers were there and it was just me.”

When asked if there were any girl groups he wanted to see in the military, he said, “I came to respect girl groups a lot. They were a big source of strength. When we watched girl group music videos in the morning, it would give us strength for the day. We watched them to the point where I’d memorized it down to the second.”

He mentioned BLACKPINK, ITZY, TWICE, and Red Velvet, and said, “I saw Red Velvet differently than I had before. They were close juniors [before I enlisted], but in the military, it felt like they were on a different level.” 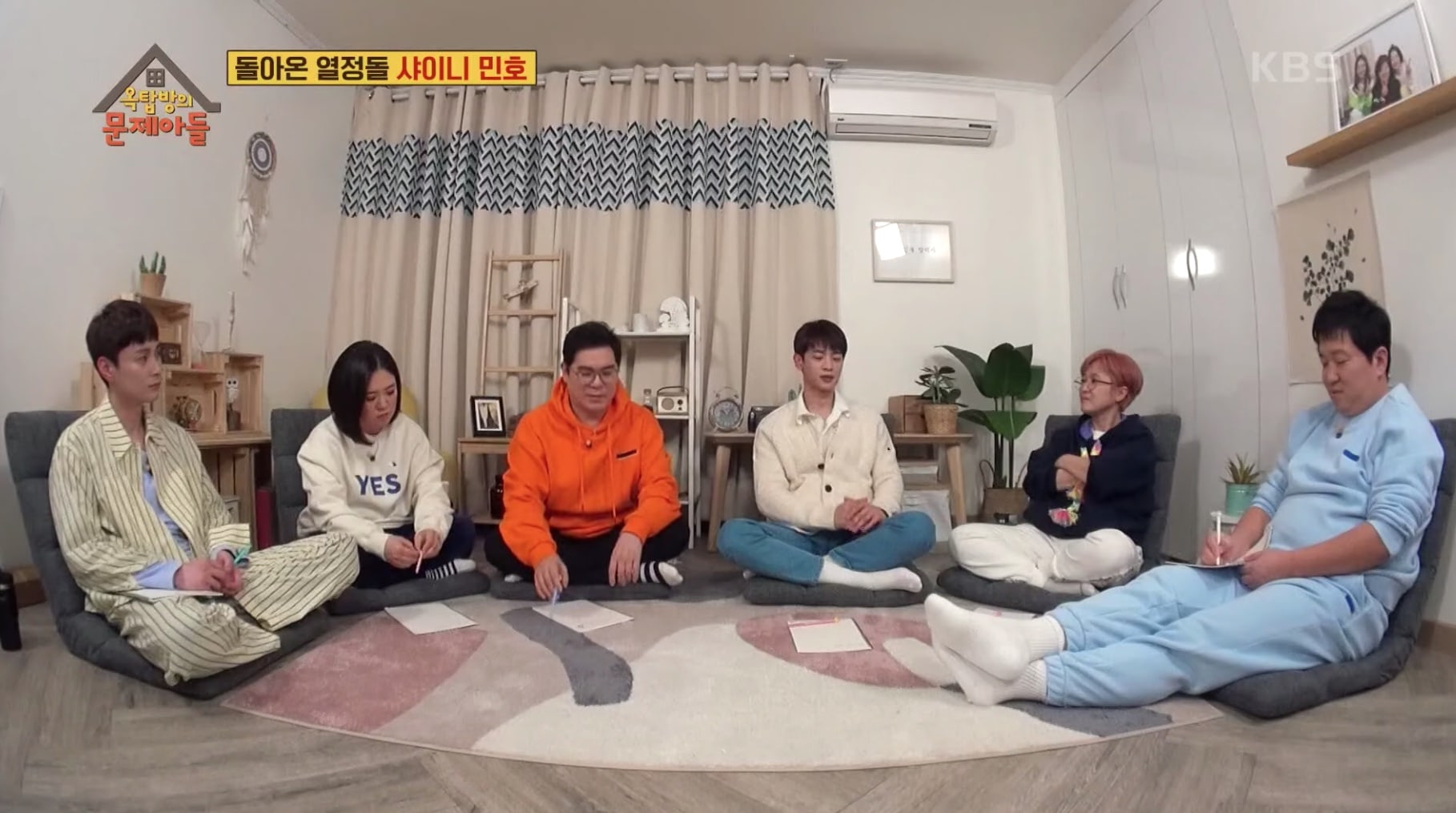 About SHINee’s comeback with their seventh studio album, “Don’t Call Me,” Minho said, “All of us were passionate about the album since it had been a while.” He added, “We poured everything we had into the choreography as if it was the last thing we’d do. It’s so tough to even do it.”

Minho mentioned AKMU’s Lee Chanhyuk, who also enlisted in the Marine Corps. He said, “I saw him just once before he was discharged. He was so much my senior [in the Marines] that it was like heaven and earth. He was so relaxed because he was about to be discharged. I was envious of that aura of a senior sergeant who was at the end of his service.”

Asked how he planned to address Lee Chanhyuk from now on, he said, “He is my senior in the Marines and my junior in the music industry. I think that if we talked and the military came up, I would have to address him formally as a Marine.”

Minho shared that TVXQ’s Changmin had taken great care of him while Minho was completing his military service. “During our training period, we can’t use cell phones,” he said. “We could get online letters, but we were only able to read one per day. We were only able to read the first one [even if we got 100]. So around midnight, fans would send me a lot of letters. I looked forward to reading them, but one day, I saw that Changmin had sent me a letter. He’d sent one at midnight to get his through. He tried again and again until he got his through right at 12:00 a.m.”

Minho continued, “He asked me how I was doing, if it was hard, that he knew it was hard. I could feel tears welling up out of emotion. We have a lot of hobbies in common like soccer and watching movies. At the end of the letter, he told me that he’d seen ‘Avengers: Endgame,’ which I’d really wanted to see but hadn’t gotten the chance. He then spoiled the contents of the whole movie for me. My tears completely dried up.” 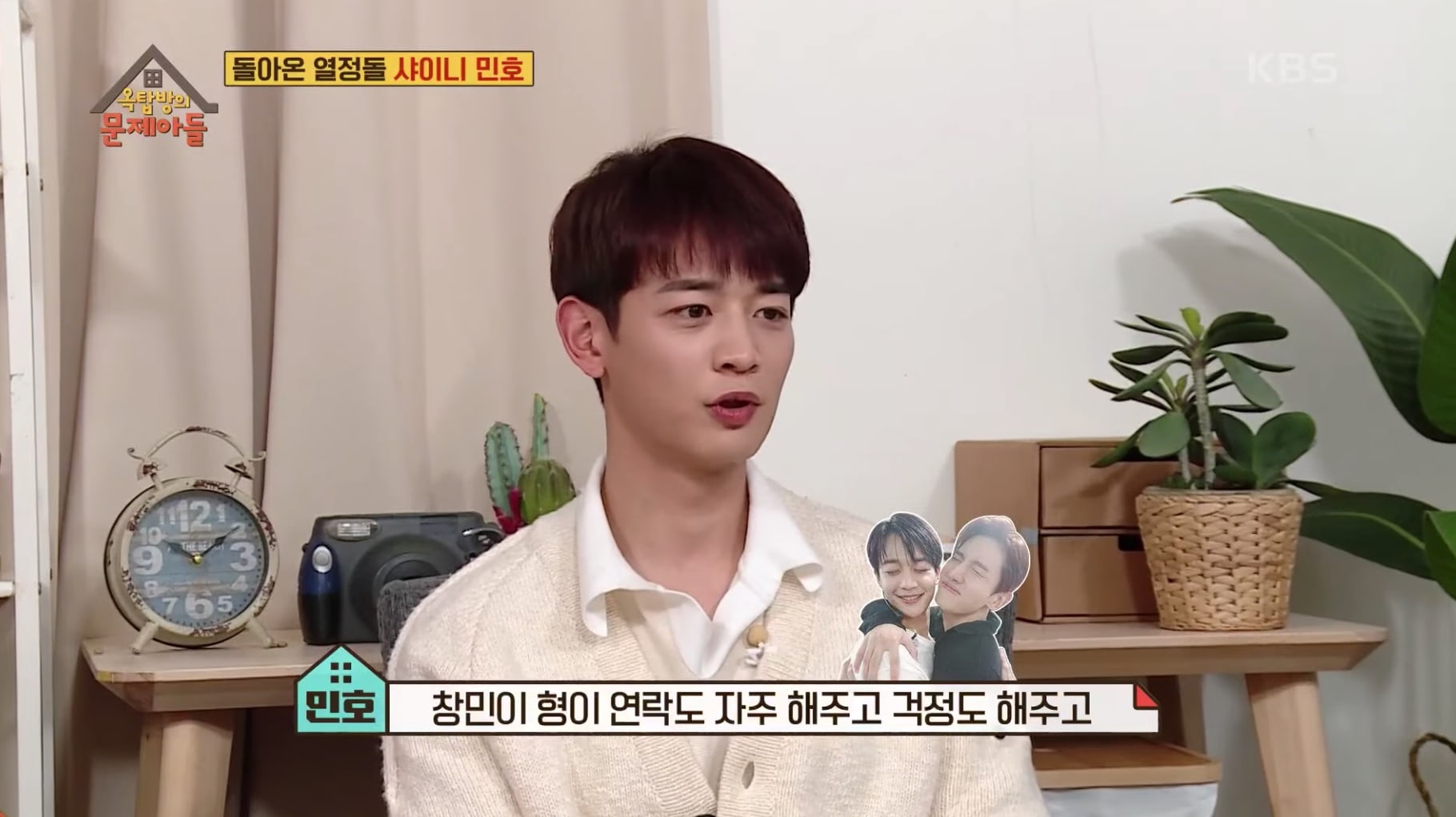 Minho, who is known as a “soccer idol” for his talent at soccer and his dream to become a soccer player when he was younger, was asked to pick the “top 3 soccer idols.” He picked Highlight’s Yoon Doojoon, VIXX’s Leo, and himself. Minho’s father, Choi Yoon Kyum, is also a soccer coach. “My father really didn’t want me to become a soccer player when I was young,” he said. “He knew how hard that path was and didn’t want it for his son. My mom was opposed to me becoming a celebrity, but my dad was fine as long as I didn’t pick sports.”

Check out Minho in “The Battle of Jangsari” below!

SHINee
TVXQ
Changmin
Minho
Problem Child in House
How does this article make you feel?