Note: Mentions of Ji Soo and his character On Dal have been removed in light of the recent controversy surrounding the actor.

This week, “River Where the Moon Rises” takes a slight breather from the pell-mell breakneck speed of its initial quartet of episodes and slows down to examine each of our characters, their motivations, and, most importantly, where their loyalties lie.

1. Go Geon’s loyalty to Pyeonggang: getting a fake corpse that looks like Pyeonggang to save her from his father

Out of everything our leads have done in the name of love and loyalty, this takes the cake. The corpse was even bloated underwater to prevent the features from being recognizable! Yuck!

What makes Go Geon (Lee Ji Hoon) so fascinating as a character is that he could easily be set up to be the male lead. After all, he and Pyeonggang (Kim So Hyun) are childhood friends that were separated. He comes equipped with a conflict that causes a rift between him and her (his father killed her mother), and he makes very intense faces.

This is instant tortured hero character right there. However, he’s relegated to second lead for one reason alone. His loyalty is selfish.

Go Geon’s loyalty unquestioningly, unwaveringly belongs to Pyeonggang. He’s going up against his father Go Won Pyo (Lee Hae Young), partnering with Mo Yong (Choi Yoo Hwa), blackmailing, and risking his job as Head of Defense for her. But she never asked him to do anything of that. She made it quite clear that she had no desire to return to the palace the last time they saw each other. Yet, he is doing everything in his power to get her to return while simultaneously protecting her identity as assassin from his father.

It’s very noble because Pyeonggang and every villager sheltering her would die if his father found out where she was, but it’s also very selfish because the girl just wants to catch a break after her traumatic past and all those years living as an assassin. Let her rest in the village!

They do share something in common in that both are willing to become anything and anyone for the sake of those they love. However, whereas Pyeonggang tends to stick to some form of moral code, Go Geon doesn’t seem to care about anyone who isn’t Pyeonggang. Unlike her, he’s grown up in a position of privilege and power but he makes no move to use that for a greater good. He has a heart, but he doesn’t know what to do with it. And it is unclear if it’s a good idea for him to find out. Thus far, Go Geon has shown deep loyalty but no romantic inclinations toward Pyeonggang. If he’s this wild about her and isn’t even in love yet, imagine him in love!

Nevertheless, his loyalty to Pyeonggang is all-consuming, obsessive, and ridiculously attractive (because who wouldn’t want someone ready to do anything for them?) And it is this loyalty that makes him such a valuable ally. She’s really a softie despite the whole blood-soaked assassin past. Plus, she was more of a point-and-shoot weapon, and consequently unfamiliar with the double-crossing and double-double-crossing that characterizes life in the palace. Go Geon, on the other hand, grew up in the thick of it. His moves to undermine his father are subtle, dangerous, and not very grand, but they’ve saved Pyeonggang’s life, many times now. And with her finally in the Palace, it stands to reason that he’ll be her fiercest, most dangerous ally. And she’ll need it.

2. Mo Young’s loyalty to her tribe and herself: poisoning the king to earn Go Won Pyo’s favor

While Go Geon actively goes against his tribe, Mo Yong is prepared to do anything and everything for hers. Despite being adopted into the Sono tribe, she readily admits to trying to get on every tribe’s good side so hers will survive. It’s a nice sentiment, but that means that her loyalties shift according to who’s the most powerful person in the room. In other words, the only person she’s truly loyal to is herself. She’ll do anything to ingratiate herself with the upper classes. She helps Go Geon hide the fact that Pyeonggang is alive from Go Won Pyo and simultaneously helps Go Won Pyo dose the king with drugs to hasten his death.

On Dal, Pyeonggang, and Go Geon’s deep loyalty contrast with Mo Young’s absolute lack of it. Like On Dal, she isn’t a fighter. Rather, she manipulates people for survival. Mo Yong doesn’t seem to have ever fought for anyone, and it is unclear as to who she is beneath the enigmatic mask she puts on. She’s clearly brilliant, slightly cruel, and very fascinated with Go Geon (who can blame her). And Go Geon, despite ruthlessly using her, seems to value her intellect and advice too.

She seems to be playing the long game, and it isn’t clear on what her goals are. Perhaps her loyalties may shift toward Geon, but nothing’s for certain when it comes to Mo Yong. 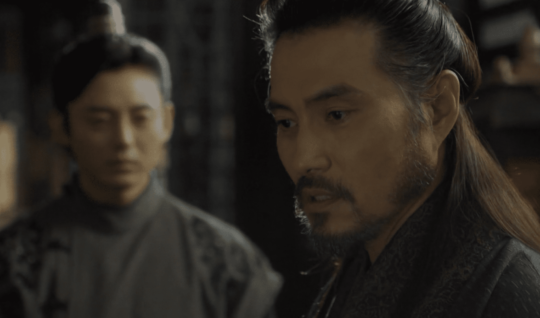 Even Mo Yong’s shifting loyalties cannot compare to Go Won Pyo’s inability to understand it. He literally admits that he cannot understand any emotion that can’t be put into something tangible. Power, hunger for wealth, and the ability to do whatever you want, he understands that. The desire to protect the people you love, like Court Lady Gong Son’s (Kim Jung Young) desire to protect the young Crown Prince Won (Park Sang Hoon), he makes good use of that. But he cannot understand the selflessness that comes with loyalty, the idea that someone could want to do something without accepting anything in return.

He didn’t seem to trust his son from the start and Mo Yong refusing payment only exacerbated that suspicion. It’s interesting because Mo Yong truly wasn’t playing a game there. She wanted to earn Go Won Pyo’s trust and thought that refusing his money would prove that she was trustworthy. Only, it did the opposite.

The people around Go Won Pyo are the same. The king’s concubine and Won Pyo’s lover, Jin Bi( Wang Bit Na), only cares about making her son king. His lackeys only care about him so long as he has power and then they’ll just as easily discard him. His life looks empty compared to the bonds that tie On Dal, Pyeonggang, and even to some extent Go Geon, together.

With Pyeonggang now having to get accustomed to life in the Palace, the conflict that’s been simmering thus far looks like it’s ready to explode. Who will survive? And if they do, will they be the same? Next week can’t come soon enough!