GOT7’s Yugyeom talked about his prized possessions in a recent video interview with Elle!

The interview begins with Yugyeom explaining that he will be introducing and giving names to his prized possessions. His first set of items includes wired earphones with bite marks from his dog, a phone with a chipped display screen he’s replaced about five times and affectionately nicknamed ‘hammer,’ and pills for his joints since he’s been dancing for 11 years. He shares, “I keep hearing noises from my knees. I’m only on my first bottle. I recently started taking them.”

Yugyeom also shares a close look at some of the gifts he’s received, including a fan-gifted bag that he’s had for around five to six years. Next, he shows off a Cartier bracelet he received as a birthday present from his ’97-line friends BTS‘s Jungkook, SEVENTEEN‘s Mingyu, NCT‘s Jaehyun, and ASTRO‘s Cha Eun Woo. Adding that he also received his Gucci bracelet from a neighborhood friend who is the same age as him, Yugyeom gives the name “97” to both bracelets. 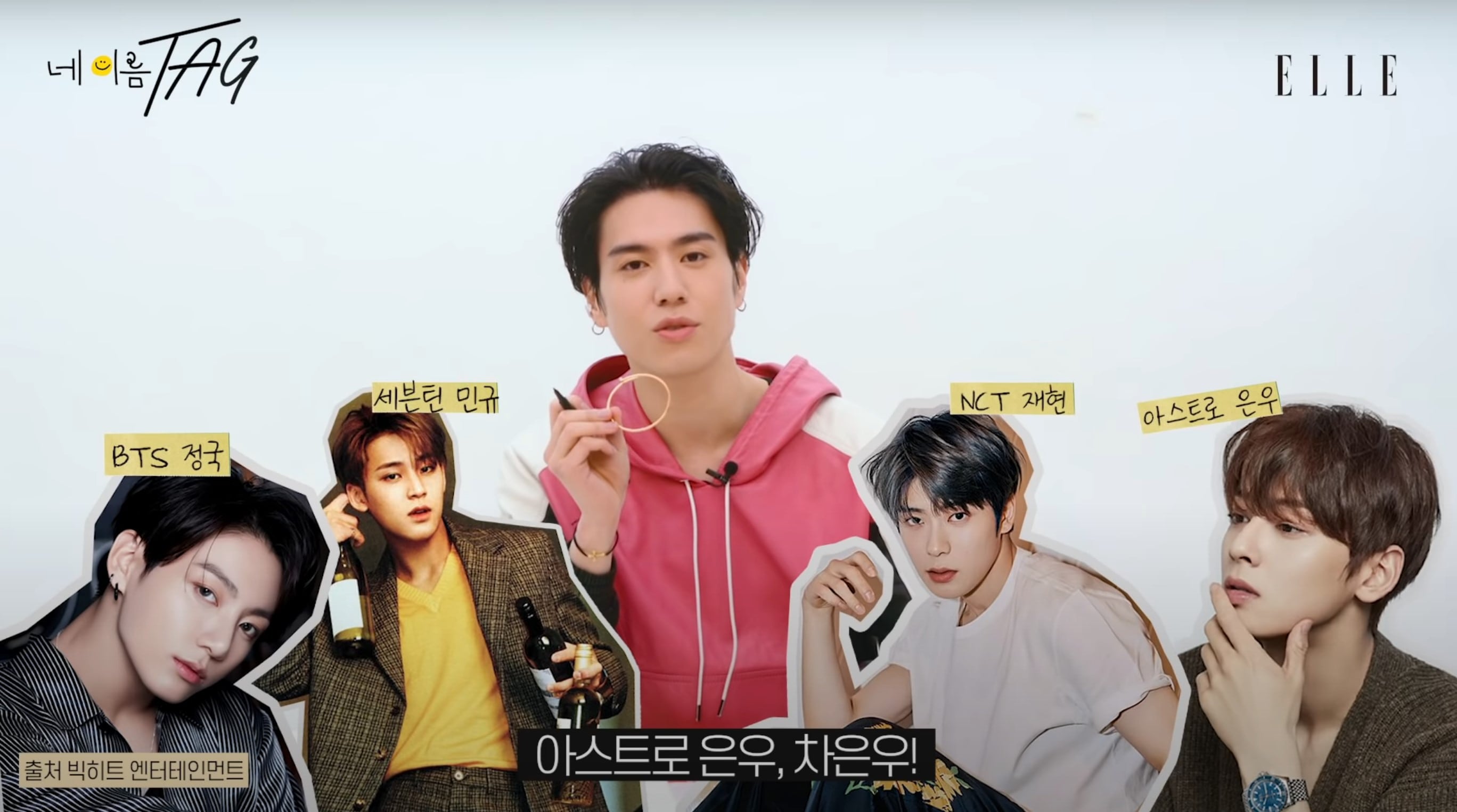 Afterwards, Yugyeom introduces the UNNAMED necklace he received from GOT7’s Mark’s friend in the United States whose name is Jerry. The necklace has a dandelion symbol, and he gives it the name “Tom and Jerry.” He also gives the name “White dandelion” to his triangle shaped necklace. All of the GOT7 members have their own versions of the necklace, which come together to make a heptagon. 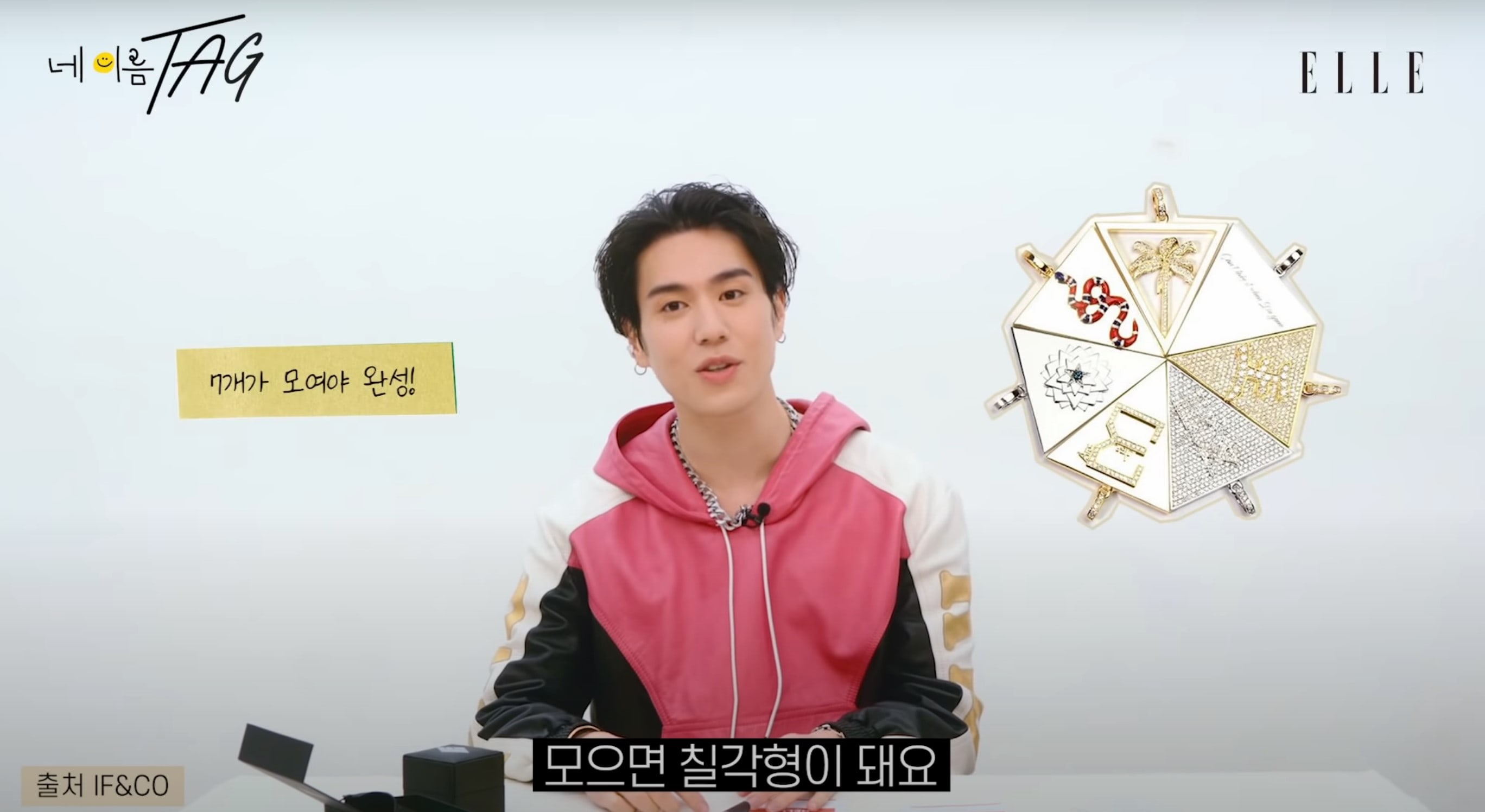 Regarding his attachment to the dandelion, Yugyeom explains, “When I was five or six, I remember it was so amazing seeing a flower grow out of a brick. I thought, ‘Dandelions are strong.'” He adds that he also has two tattoos, giving a look at the dandelion tattoo on his arm.

Furthermore, Yugyeom gives the name “Fendiman” to the Fendi watch he received as a gift from Jackson, and he names the Rolex watch from BamBam as “Easy,” which is what they often say to each other to get hyped up. When asked how he repaid the gifts, Yugyeom replies, “I treat them well on a normal basis. I received them gratefully.”

While introducing AOMG’s hat, Yugyeom clarifies, “GOT7 has not broken up. Our members had plenty of conversations, and we decided we should go to different companies and do what we each want to do a bit more.” He explains that the fellow dancer Monster Woo suggested that he should join AOMG while they were having one of their freestyle jams.

Yugyeom shares that he feels like he has become a trainee once again and adds, “Since I have to show my own color, I think my focus on music has heightened.” Finally, Yugyeom says to the fans, “Our fans must have felt some emotional changes, and I think they probably felt a lot of different emotions. We always said amongst ourselves that it’s not the end, and it would be great if you could support us as we each take on our own challenges. I hope you don’t forget that I’m always sincerely grateful and that I love you all.”

GOT7
Yugyeom
Elle
How does this article make you feel?