“Mouse” revealed its character relationship chart ahead of its premiere!

tvN’s new drama is a mystery thriller set in a world where humans can identify psychopaths through a DNA test on a fetus in a mother’s womb. Lee Seung Gi will star in the drama as Jung Ba Reum, an upstanding rookie police officer who is passionate about justice, while Lee Hee Joon will play Go Moo Chi, a hardened detective whose parents were murdered when he was young and is willing to resort to any means necessary to avenge their deaths.

The story will follow their chase of a predator that stands at the top one percent of evil psychopaths.

In the newly released character chart, Jung Ba Reum and Go Moo Chi take center stage along with Oh Bong Yi (Park Ju Hyun), a problem child who is skilled in martial arts, and Choi Hong Joo (Kyung Soo Jin), a producer who doesn’t let anything get in the way of her investigations.

Connected to Jung Ba Reum are Goo Dong Goo (Woo Ji Hyun) and Na Chi Gook (Lee Suh Joon), both friends from high school who stay by his side through thick and thin. Go Moo Won (Kim Young Jae) is Go Moo Chi’s older brother who regrets how his little brother obsesses over getting revenge on their parents’ killer. He is a priest living in the same neighborhood as Jung Ba Reum and provides both officers with consultation and consolation. Also in the chart is Oh Bong Yi’s grandmother (Kim Young Ok), who blames herself for her granddaughter having been the victim of a crime. She has dibs on Jung Ba Reum to become her grandson-in-law.

Apart from these characters also exist the mysterious characters surrounding the four main roles. Han Seo Joon (Ahn Jae Wook) is an established neurosurgeon who has excellent manners and sense of humor. His happiness goes to ruins when his wife Sung Ji Eun (Kim Jung Nan) gets caught up in one of the biggest serial killer cases. His best friend is Daniel Lee (Jo Jae Yoon), who has succeeded in his research on identifying psychopaths through a DNA test of a fetus. Sung Yo Han (Kwon Hwa Woon) is a medical student going through residency at the emergency unit.

The lineup of police officers is also worth noting. It includes Park Doo Suk (Ahn Nae Sang), who used to be a successful homicide detective, Bok Ho Nam (Hyeon Bong Sik), who is always stressed because of Go Moo Chi, Kang Ki Hyuk (Yoon Seo Hyun), who has a love-hate relationship with his coworker Go Moo Chi, and Shin Sang (Block B‘s P.O), the youngest of the team who admires Go Moo Chi. 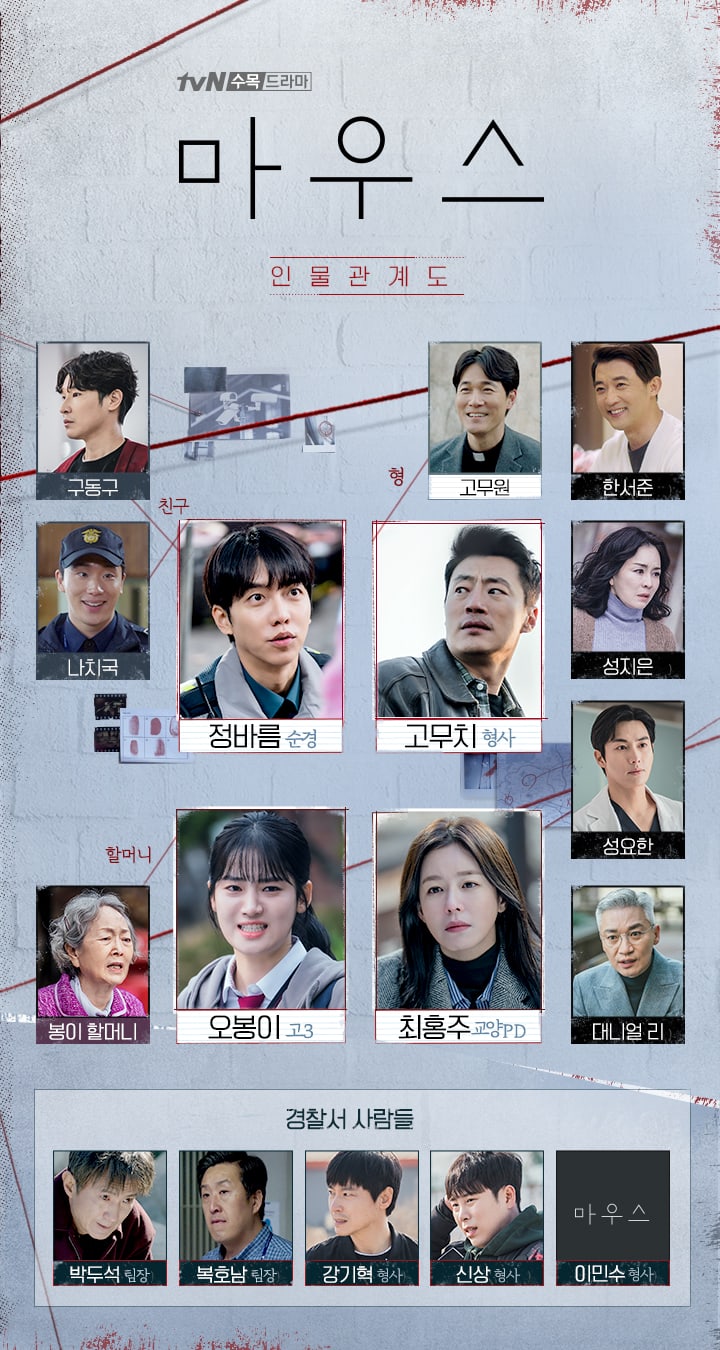 The production team commented, “Not only will the refreshing story of ‘chasing a human hunter’ be an interesting key point but also the series of events that result from the unpredictable set of relationships each character has with one another.” They added, “‘Mouse,’ a drama that will make its mark as a new genre in the style of tvN in 2021, is approaching in eight days. Please look forward to its first broadcast.”