On February 26 KST, Starship Entertainment released a follow-up statement about the recent rumors that MONSTA X’s Kihyun had been a perpetrator of school violence.

In their initial statement on February 23, Starship stated that they were contacting Kihyun’s classmates, teachers, and acquaintances in order to verify the facts, and said that they were open for a discussion with the writer of the post. Starship also clarified that previous posts in 2015 and 2021 made by another person were false.

This is the statement posted on MONSTA X’s official fan café on February 26:

Hello, this is Starship Entertainment.

We are writing to inform you of the agency’s position on the various rumors and posts that have been spreading online about MONSTA X’s Kihyun. As it has been a long time [since he was in school] and we did not want to overlook any errors, we took the time to confirm what happened using various methods. We offer our sincere apologies that it took so long.

Regarding the allegations of school violence, we checked the truth with the artist as well as his school administrators, classmates, and acquaintances. A majority of the classmates testified that Kihyun had never engaged in acts of school violence. We have also included his student record so that people can objectively assess his life as a student.

Kihyun’s middle school student record shows that his specialities were assembly, musical interpretation, and singing. His dreams were to become a minister or a singer, while his parents wished him to be either a minister, singer, or businessman. The teachers wrote that Kihyun was kind and knew how to help others, that he expressed interest in diverse fields, that he was good at self-expression and liked to perform, but that he needed to put more detailed thought into what he wanted to do in the future.

In the behavior and advice section, the teachers wrote that he was amicable and loyal, that he had a sense of responsibility about his tasks and worked hard to improve his grades, but that sometimes he had trouble focusing in class and would get swept up in what his friends were doing without a strong sense of self-assertion. In gym class, he took care of others, had a bright personality and a sense of humor, was good at singing, respected other people’s feelings and gave them good advice, and always completed a task once he had set his mind to it. 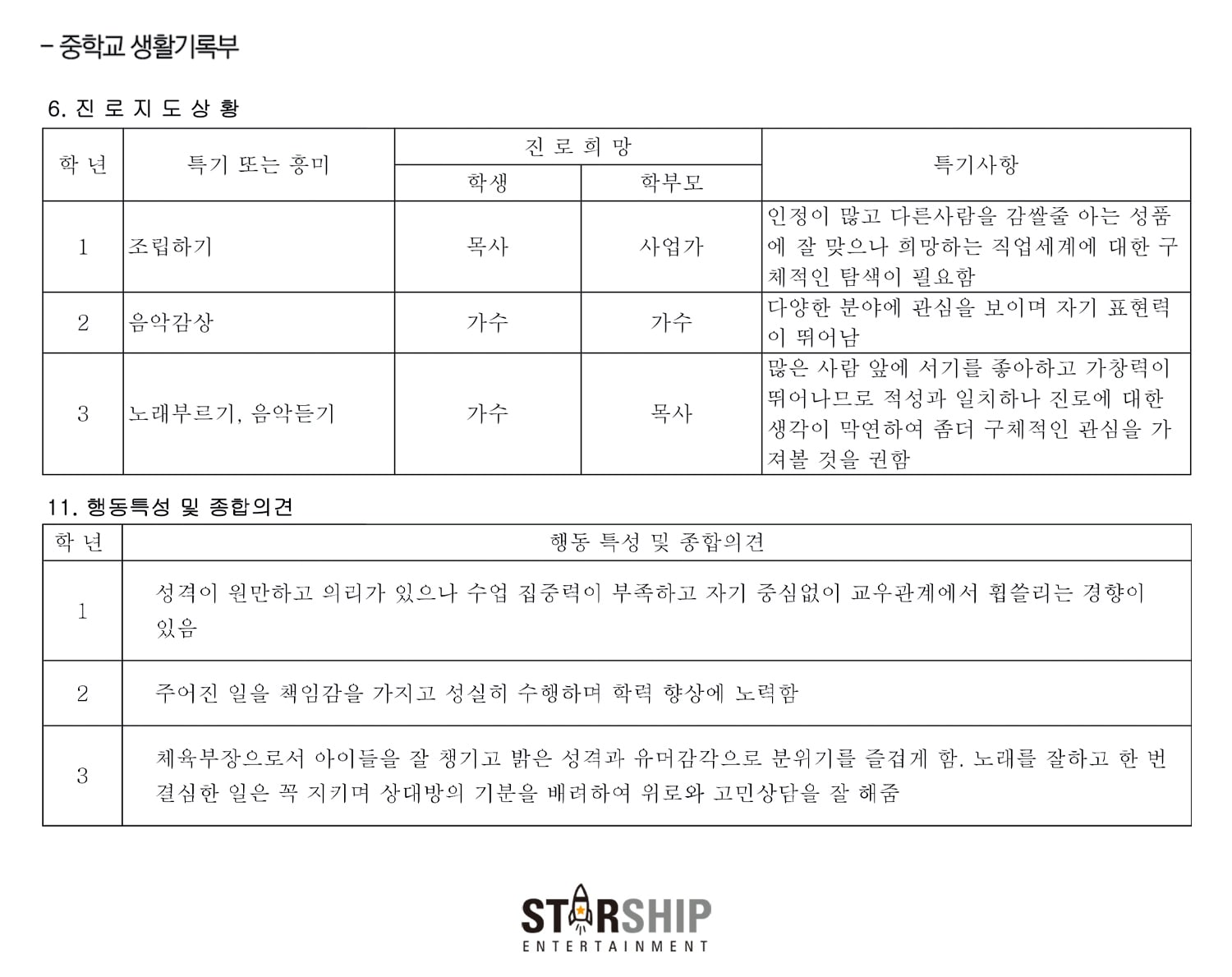 In Kihyun’s high school student record, his specialties were singing and his future dream was to become a singer. His parents wanted him to be a singer or a music producer. The teachers wrote that he had a talent for music, a powerful voice, and a dedication to learning more about singing, piano, and music. The teachers added that he had great stage presence and manners, worked hard toward his goal, practiced different methods of expressing his voice, and was learning various instruments and producing on top of singing.

In the behavior and advice section, the teachers wrote that he had a strong sense of artistic and emotional expression and that he was popular in school due to his singing at various talent shows. He showed dedication toward his goal by practicing how to sing and how to play piano. Compared to his love for music, he showed less interest in other subjects and had a lower achievement level, but his work in English and social studies showed that he could get good results when he applied himself. He was proactive and had strong leadership skills and showed a desire to improve himself in what he felt was lacking.

The teachers also wrote that he was good at asserting his own opinion and had strong leadership skills, bringing the class together for group activities and helping his peers instead of pushing off the responsibility to other students. The teachers wrote about his great talent for singing and his ability to interpret songs in his own style, adding again that it made him very popular among both students and faculty. One teacher wrote that despite having a weaker physique, he was passionate about his goals and advised that he take better care of his health in order to pursue his dreams. Another teacher pointed out his dedication in pursuing music through private lessons and his cultivation of basic producing skills.

In conclusion, the teachers wrote that they looked forward to his future, that he was a bright kid with strong social skills who got along with his peers, that he had strong leadership skills and asserted his own opinion and had a rational attitude toward problem-solving. 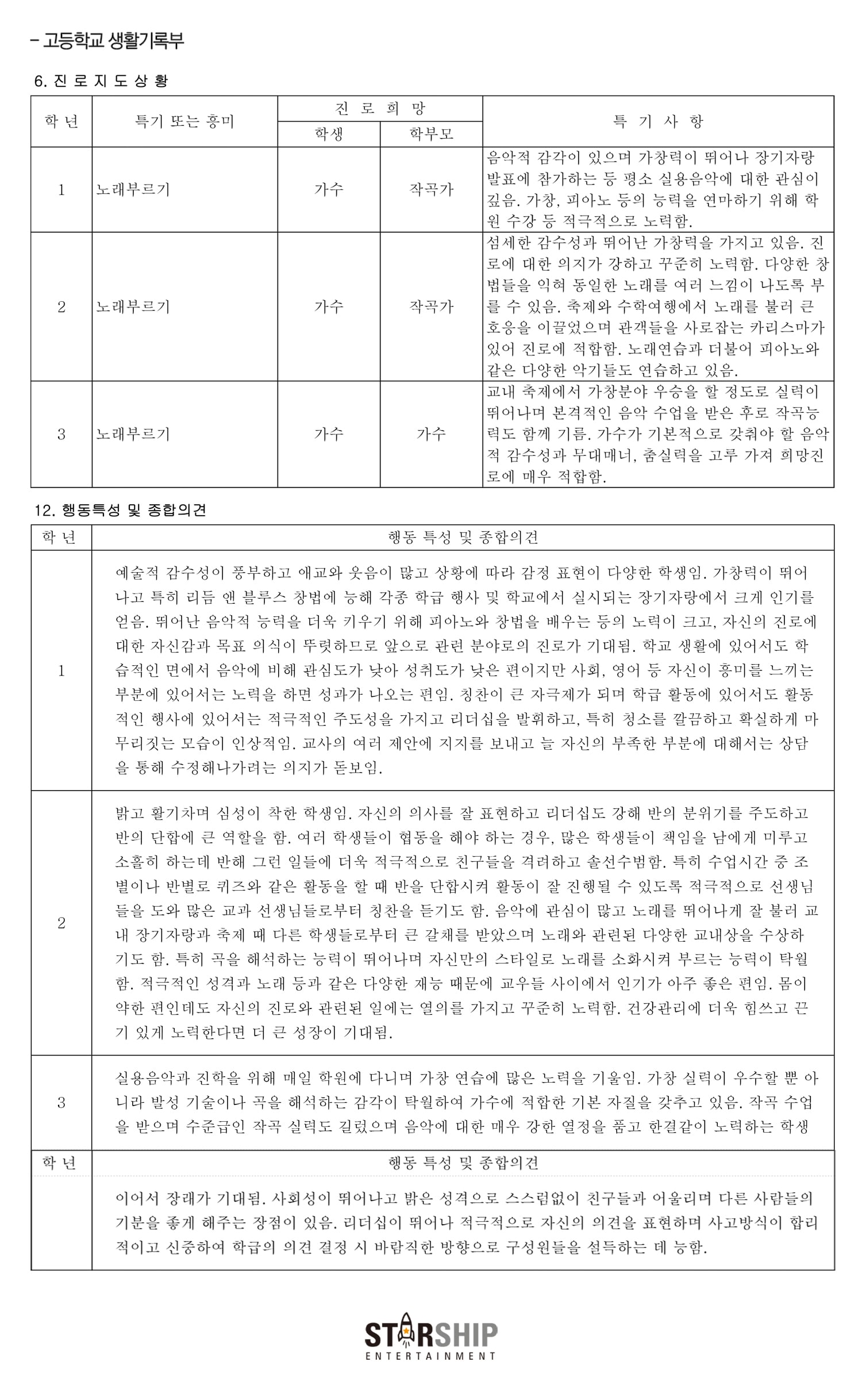 In a different case from the above, we have hired two legal firms in order to take legal action against those who spread false rumors against [Kihyun] twice, in 2015 and 2021. We intend to file a complaint for defamation and the spreading of false rumors at the Gangnam Police Station today (February 26).

In 2015, we met with the poster after they contacted us first. For their convenience, the agency met the poster not in the agency building but at a coffee shop in a hotel lobby. At that meeting, the poster apologized for the post and requested lenient treatment. Even though the poster was an adult, not a minor, we accepted the poster’s handwritten apology and a written promise that they would not engage in the same behavior again. Without any monetary exchanges or requests, we decided to wrap up the case without legal action.

Recently, that poster has begun again to spread false rumors that have nothing to do with the truth. We have judged that the time for patience has passed and are waiting for results from our legal process. Moreover, the poster has defamed the agency by falsely claiming that the agency put unfair pressure on them, so we will also be taking strong legal action regarding that as well. Furthermore, we announce that in addition to this ongoing legal action, we intend to issue a strong legal response to any further defamation such as spreading false rumors about our artists and posting malicious comments.

Thank you for the support you have shown us and the artists at Starship Entertainment.

Kihyun also shared a personal post on the fan café.

First, I want to apologize for causing a lot of concern because of this issue.

For the past few days, I’ve been thinking about what kind of student I was.

I know that other people might remember me in different ways, so I went through my own memories more carefully. There were a hundred, a thousand times when I doubted myself, suspected myself of having a side of me that I could no longer remember.

What I remember of my middle school days is that I was a student who liked to sing and liked to hang out with his friends. In particular, in the third year of middle school, I remember having fun gathering with my friends to practice the song for our teacher’s wedding. I remember becoming closer with my classmates through the experience and spending a lot of time even on our breaks together.

Of course, when I look back on myself, I know that I wasn’t faithful to my studies and that I did things that weren’t proper for my position as a student. I continue to feel a sense of guilt about those things after I became an adult, and I have no excuse for those who speak harshly about those things now.

I apologize for causing disappointment through this issue and will live in deep self-reflection.

If there were those who were hurt through my immature actions or behavior during my school days, then I want to sincerely apologize to them now. I’m also deeply, deeply sorry to our fans for making them worry due to this negative situation.

Since I cannot change who I was in the past, I will take this as an opportunity to reflect again on myself.