German Radio Station And DJ Issue 2nd Apology For Racist Remarks About BTS; MAX, Halsey, And Lauv Speak Out To Show Support For The Band

German radio station Bayern 3 and DJ Matthias Matuschik have both issued new apologies for the racist remarks he made about BTS on air.

Earlier this week, Matthias Matuschik made disparaging and racist comments about BTS during a live radio broadcast on Bayern 3. Referring to their recent cover of Coldplay’s “Fix You” as “blasphemy,” the DJ described BTS as “some crappy virus that hopefully there will be a vaccine for soon as well.” He later added that to atone for the cover, the group “will be vacationing in North Korea for the next 20 years.”

After fans all over the world—including Germany—spoke out against his remarks, Bayern 3 initially released an apology that drew further ire online for insisting that Matuschik was not racist or xenophobic.

The radio station’s first apology stated that though the DJ was merely “presenting his opinion in an ironic, exaggerated way and with exaggerated excitement, his words went too far and hurt the feelings of BTS fans. But he—and he has assured us of this—in no way intended this. He just wanted to express his displeasure over the aforementioned cover.”

The station went on to point to Matuschik’s “involvement in refugee aid and his constant campaign against right-wing extremism” as evidence that he was neither xenophobic nor racist.

As many denounced the radio station for what they considered a half-hearted response, American singers MAX, Lauv, and Halsey spoke up on social media to condemn anti-Asian racism and show their support for BTS, with whom all three have collaborated in the past.

MAX wrote on Twitter, “BTS is one of the hardest-working and most humble groups in the industry. They deserve all the success they’ve earned. Hearing such hateful words used against them by the radio host at Bayern 3 made me sick. The hate to them and the Asian community as a whole is unacceptable.”

BTS is one of the hardest working and most humble groups in the industry. They deserve all the success they’ve earned. Hearing such hateful words used against them by the radio host at Bayern 3 made me sick. The hate to them and the Asian community as a whole is unacceptable

Lauv similarly wrote, “Standing by my BTS brothers and everyone continuously effected [sic] by racist remarks as hurtful as what we heard on Bayern 3. No one should have to endure this and together we must stand up and stop it.”

standing by my @bts_bighit brothers and everyone continuously effected by racist remarks as hurtful as what we heard on Bayern 3. no one should have to endure this and together we must stand up and stop it

Meanwhile, Halsey took to Instagram Stories to write, “I am horrified by the comments made by Matthias Matuschik. Racism and xenophobia cannot be thinly veiled as ‘on air humor.’ Irresponsible and disgusting statements in a time where hate speech and violent behavior towards Asian communities are skyrocketing. This is unacceptable. I hope a better apology to BTS, and the Asian communities across the world, is on its way.” 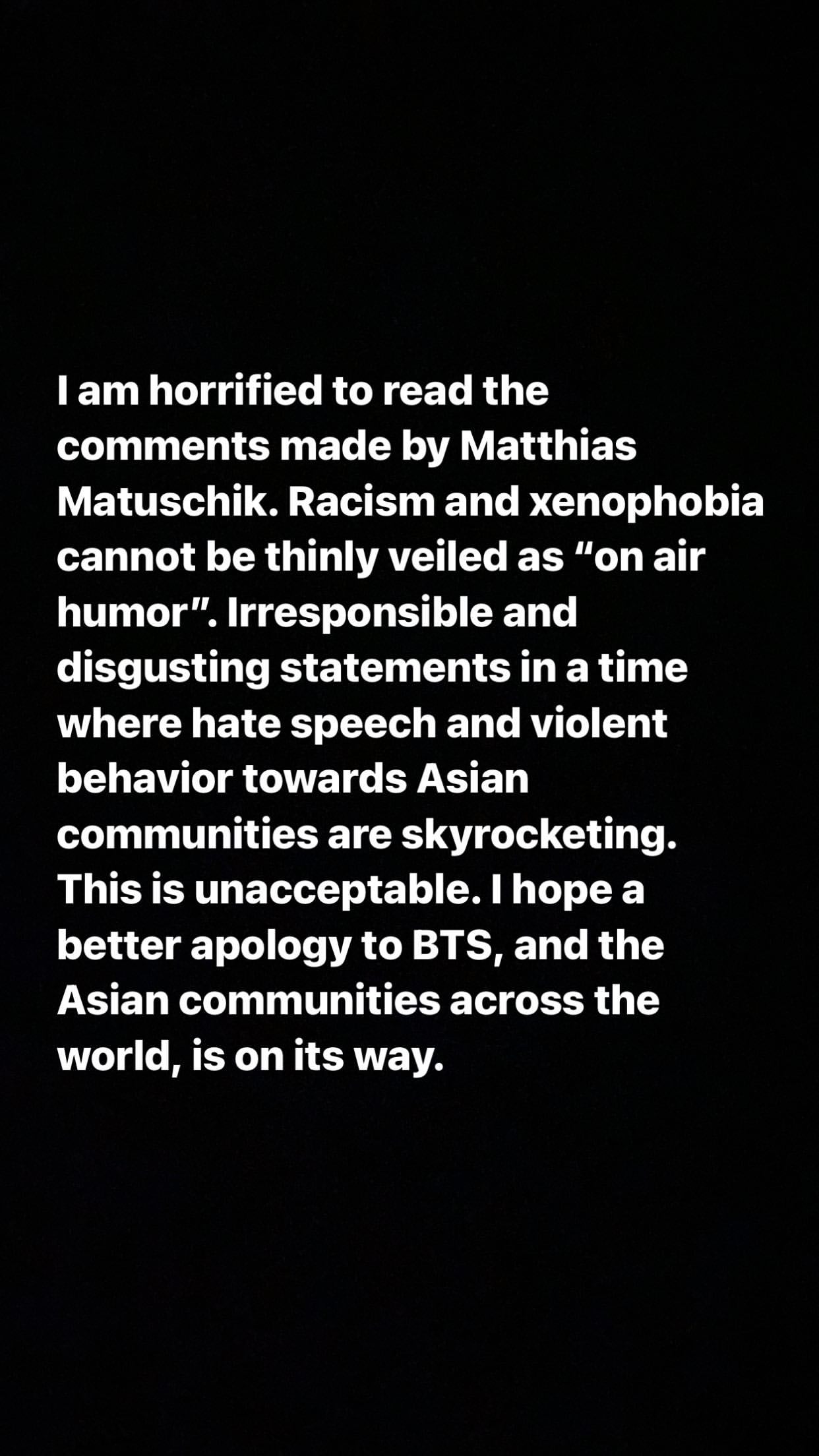 Both Bayern 3 and Matthias Matuschik later released new statements of apology for his remarks.

We apologize unreservedly for the remarks made by presenter Matthias Matuschik in his live broadcast.

His choice of words to comment on BTS were unacceptable. Both he himself and we at BAYERN 3 know that it is not enough to simply intend a different meaning. If statements are perceived by many people as offensive or racist, then they were.

However, we feel the need to stress that Matthias’ social engagement to promote a peaceful togetherness among people (in Bavaria) is testament to his conviction that everyone must be treated equally—regardless of their nationality, culture, skin color, sexual orientation or religion. BAYERN 3 also expressly and resolutely distances itself from any form of racism, exclusion and discrimination.

In the meantime, the presenter and his family receive serious threats. We ask, despite every sympathy for the indignation, that the discussion must remain on a substantive level. We will work through the issue in more detail with Matthias and the entire team and ensure that such serious mistakes will not happen again in the future.

I am deeply saddened about the reactions my comments in my live show have caused – and first of all: I am very sorry and I would like to unreservedly apologize.

In my presentation, I was primarily annoyed by the fact that the boy band BTS covered the song “Fix You” by Coldplay, which I hold in high esteem. The nationality of the seven boys should not matter – mentioning it and making the connection with a virus was completely out of line.

I have given this a lot of thought over the past few hours and understand and accept that my words racially offended many of you, especially the Asian community. That was never my intention, but I realize that, in the end, what matters is only how words are perceived – not how they were intended.

People who have known me for a while know that, in addition to my work as a radio DJ and cabaret artist, I have also been very active against right-wing activities and for those seeking protection since the influx of refugees in 2015. It makes me all the sadder that I have hurt others with an ill-considered statement (that was intended to be funny) and put myself in a false light. I have made a big mistake from which I will learn.

I am very sorry.

BTS
Max
Halsey
Lauv
How does this article make you feel?