iKON Talks About “Why Why Why” Comeback, Preparing For Mnet’s “Kingdom,” And More

iKON participated in an interview about their comeback with “Why Why Why”!

On March 3 at 6 p.m. KST, their digital single “Why Why Why” and the music video for it will be released. Ahead of the release, the six members discussed various topics concerning their music.

When asked about how it felt to make a comeback in about a year, Jinhwan said, “First off, I feel sorry to our fans. Although we have met each other through various communication channels like YouTube, it always feels like we haven’t seen each other in a long time. I want to repay them with good music. I want to make 2021 a year where we widely and strongly imprint IKON’s name.”

Bobby continued, “It’s been a long time since we made a comeback, so it was fun to prepare for it. One thing that’s unfortunate is that we can’t directly meet with our fans. But we’ll work that much harder, so please look forward to it.”

Yunhyeong said, “I’m always thankful and sorry to the fans. They waited for us even though it’s been a long time. Unlike iKON’s previous image, we will come back this time with a more mature appearance. We will try to make this a year full of iKON.”

Junhoe added, “The biggest emotion I feel is happiness. During our break, I really thirsted for album activities and stages. I endured this time with the support and love of our fans. I want to meet them and promote with gratitude, and I want to work with a happy heart.”

Donghyuk commented, “[Before our comeback], I was curious about the fans’ reactions, so I kept looking for them. A lot of people are looking forward to it. I will work hard to live up to that expectation. I’m nervous and excited.”

Chanwoo said, “I feel really great because I can feel that the fans liked the teaser clip. I want to show them a cooler and more mature side. I hope that we can all enjoy this together.”

Donghyuk gave more details about “Why Why Why.” He explained, “It talks about lovers breaking up. It’s a sad song that accepts the breakup by continuing to ask yourself and your lover why because you can’t understand the reason you’re separating. All the members put a lot of effort into delivering the emotions contained in the lyrics.

When asked about how they felt after listening to the track for the first time, Yunhyeong laughed, saying, “Title track!! The composition wasn’t obvious. Usually, the outro ends after the bridge, but ‘Why Why Why’ ends with the emotion at its peak. That part seems to be the charming point that makes you want to hear it again. In particular, there is a section where Donghyuk cries, and I can’t forget his face when he recorded that part. I think that’s the killing point of this song.”

Donghyuk added, “When we recorded the song, the producers considered emotions very important. So I recorded it as if I was crying. After I recorded my part, tears slightly welled up in my eyes. We worked hard to the point where we had to record for three days.”

Jinhwan agreed with him, saying, “Each word of the lyrics is filled with emotion. I really like the title too. It’s because it’s repeated that it becomes imprinted in your mind. By emphasizing the word ‘why’ three times, it seems to perfectly express a broken heart that cannot easily accept the breakup.”

Bobby commented, “I thought it was a sad song because it contains a lot of my members’ emotions. When I was practicing the choreography, I almost cried listening to Donghyuk’s last part.”

Bobby also participated in writing and composing “Why Why Why.” When asked about how he made the song, he explained, “I was in charge of making the rap, so I talked a lot about the concept of the song with the producers. We discussed the mood, melody, and flow carefully. I tried many things, and they kept changing. Then, it was concluded that we should go with a calm and nonchalant track, and after a long revision, we created this kind of mood.”

Of course, iKON couldn’t leave out the choreography for this track. Junhoe said the key point of this dance is a move that expresses white ash falling during the part “only white ash remains.” Yunhyeong shared he thinks the key move is when Junhoe sings the chorus of the first verse while lying down.

Jinhwan said, “Everyone will surely find iKON’s new attempts. To give a spoiler, Bobby does not appear in the first verse, and his part appears in the second verse. I think that composition will also feel different and fun.”

Furthermore, Chanwoo added, “We had a lot of meetings while preparing for this album. We held meetings among ourselves, and we often discussed our ideas with the company employees. Performance is also one of the parts we put our heart and soul into. We didn’t use the exact choreography given by the choreographers, but we modified it a lot. We worked hard to prepare for this comeback.” 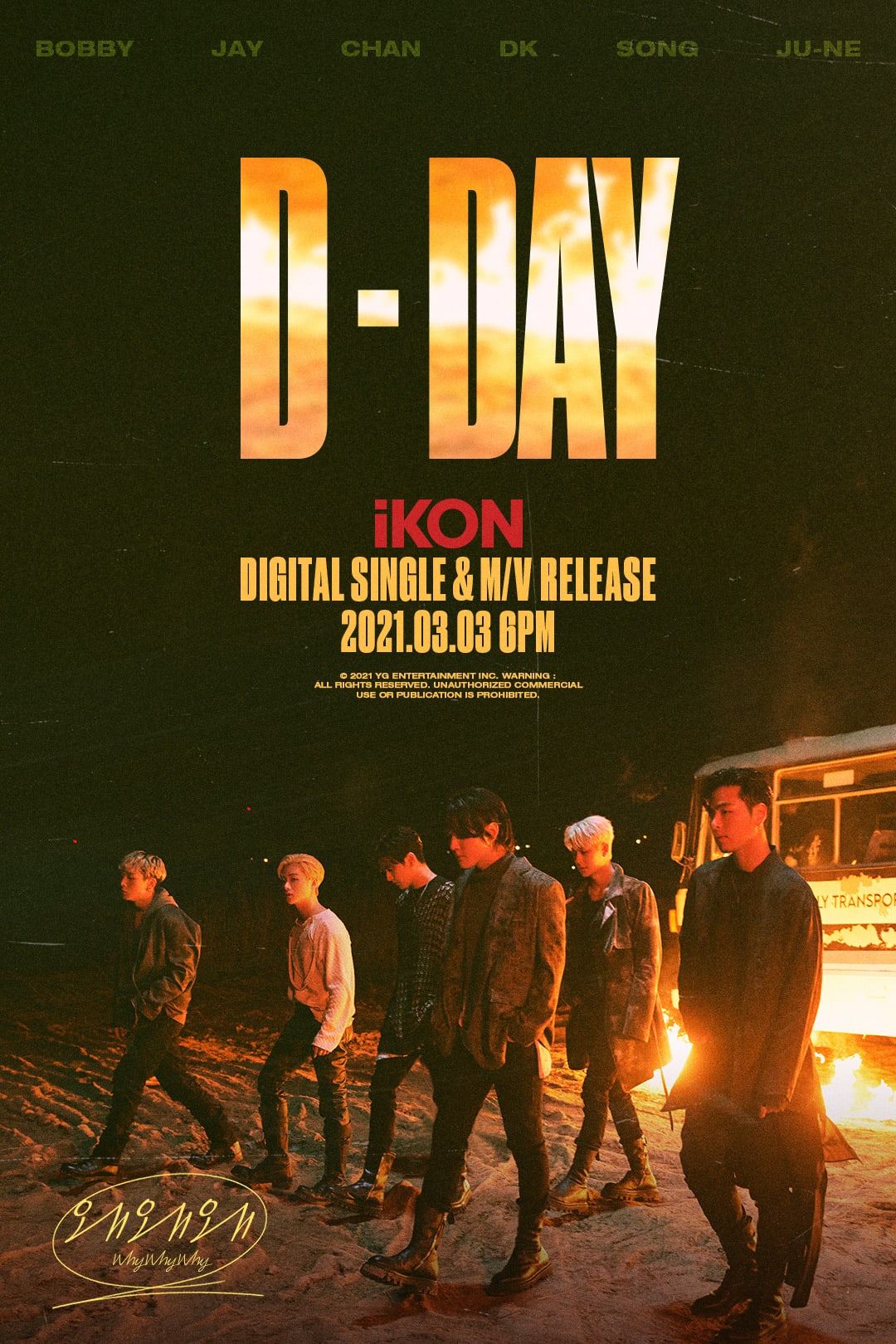 The interviewer asked iKON if there is anything new they want to show. Donghyuk said, “We’ve become more mature. In particular, each member’s charm can be seen in the jacket photos. As Chanwoo said, this is the activity where our opinions were reflected the most. We actively participated to decide what we want to show, what style we wanted to do, and what challenges we wanted to partake in. Everyone can look forward to it.”

Yunhyeong added, “We paid a lot of attention to our appearance. First off, I changed my hair color. I have almost white hair now, but I’m going to change it more in the future. As much as the fans have waited for a long time, I have thought of various styling that I have not tried before. We will always show new performances by giving variations in style.”

The members also talked about some memorable moments while filming the music video. Yunhyeong said, “It was really windy during the outdoor filming for the group dance scene. The wind felt stronger because we were on the rooftop of a tall building. I’m so proud we were able to overcome the tremendous wind and finish the shoot safely.”

Junhoe laughed and commented, “I agree. It was a stationary move, but the wind kept pushing my body. Now it remains as a very interesting memory to me.”

Bobby added, “I don’t appear in the first verse. So I saw the members dancing from a distance.” Chuckling, he admitted, “I realized how cool iKON is.”

Jinhwan shared, “I took a solo shot at the end. Chanwoo was waiting for me even though he was tired. I was more energized to think that he was waiting for me. Thanks to him, I finished filming in three takes. So I really want to thank Chanwoo.”

When asked about iKON’s strengths, Chanwoo said, “When the six of us with different charms come together, we create good synergy. We’re the perfect match. I think the biggest synergy comes out when we are united as the team iKON.” Junhoe continued, “We have been together for a long time since we were younger. We’re more like a family now. I want to see them for a longer time.” 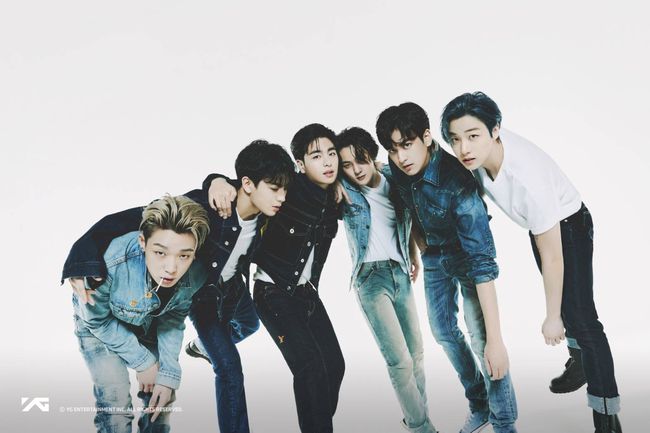 iKON talked about Mnet’s “Kingdom” as well. When asked if they were tired preparing for both their comeback and the show, Junhoe said, “The feeling of excitement is bigger than the feeling of tiredness. Maybe that’s why we spend a lot of time laughing in the practice room. Most of all, I got energy from the thought that I could show a new side of me to the fans. We also received a lot of inspiration after filming the interview portion of the show. It’s been a while since I felt nervous, and I liked that feeling. I missed this feeling during our break, and I felt very excited. Please look forward to iKON leaving a highlight on every stage.”

Bobby shared, “I recently felt something while doing solo activities. The preparation process is busy, but when we start our activities, we actually gain energy. We get fired up thinking about our fans. It’s not difficult because we just have to show you what we’ve prepared so far. So I’m sure ‘Kingdom’ will be fun. iKON is the best team, after all.”

Lastly, iKON addressed their fans. Donghyuk commented, “This comeback is another start for iKON. I’m already excited that we’ll be able to show them a different side of us with our new song and various activities. I’m constantly working on music. I really want to take this opportunity to tell my fans that I missed them and that I love them.”

Jinhwan added, “We always miss iKONICs (fandom name) and long to see them. We will continue to work hard to show what iKONICs wants to see through good performances and activities. I love you!”

Are you ready for iKON’s comeback?