Watch: Eugene Takes Care Of Her On-Screen Daughter Kim Hyun Soo Behind The Scenes Of “The Penthouse 2”

“The Penthouse 2” showed what it was like on set during the filming of one of the show’s most shocking scenes!

In the drama, Kim Hyun Soo plays the role of Bae Ro Na, the daughter of Oh Yoon Hee (Eugene). Recently, Bae Ro Na (Kim Hyun Soo) took a fall down a set of stairs outside Chung Ah Arts High School after she was attacked by Ha Eun Byul (Choi Ye Bin) with a trophy. Following this scene, Kim Hyun Soo and Choi Ye Bin topped the ranking of the most buzzworthy drama actors of the week.

In a new making-of video, Kim Hyun Soo rehearses her line where she has to tell Ha Eun Byul that she’s defeated her and then laugh while holding up her trophy. The staff tease Kim Hyun Soo by saying she sounds too kind because she doesn’t know how to laugh in a wicked way. Kim Hyun Soo laughs and replies that it could be because she’s usually just crying every day in the drama. Choi Ye Bin then practices her trophy swinging to get ready for the big scene.

Later on, the actors are chatting together about trying to stay warm on the cold night when Kim Hyun Soo appears in her bloody makeup with a fake trophy part attached to her head. “I’m alright,” she tells the making-of camera. “I’ve got a new ornament in my hair. I’m starting a trend.” The other young actors even grab a selfie with Kim Hyun Soo while she’s in her makeup. 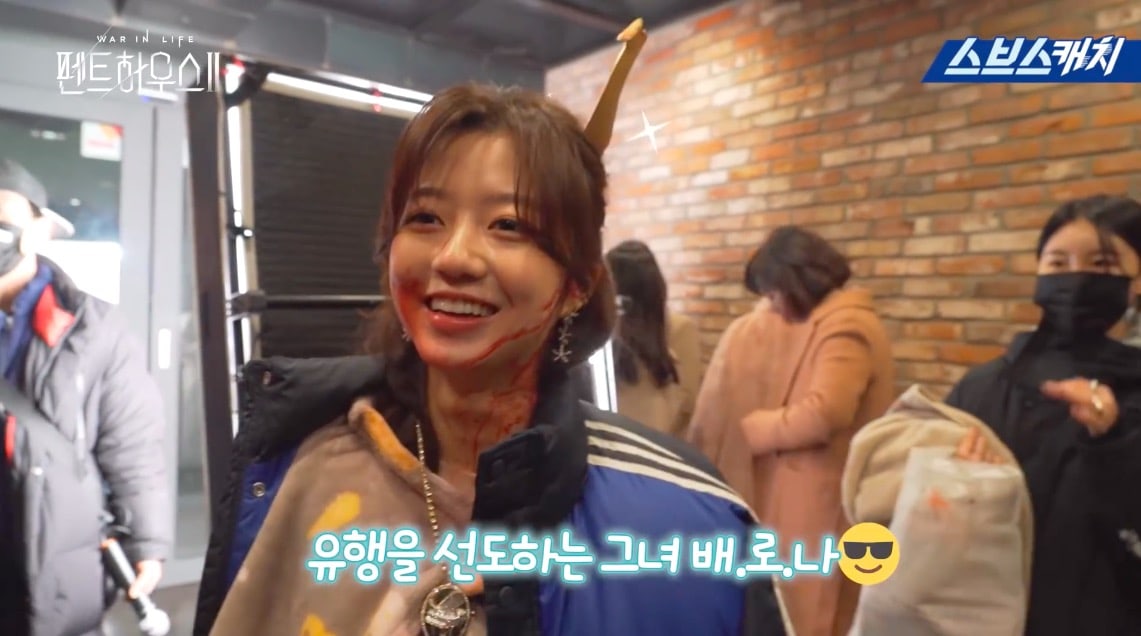 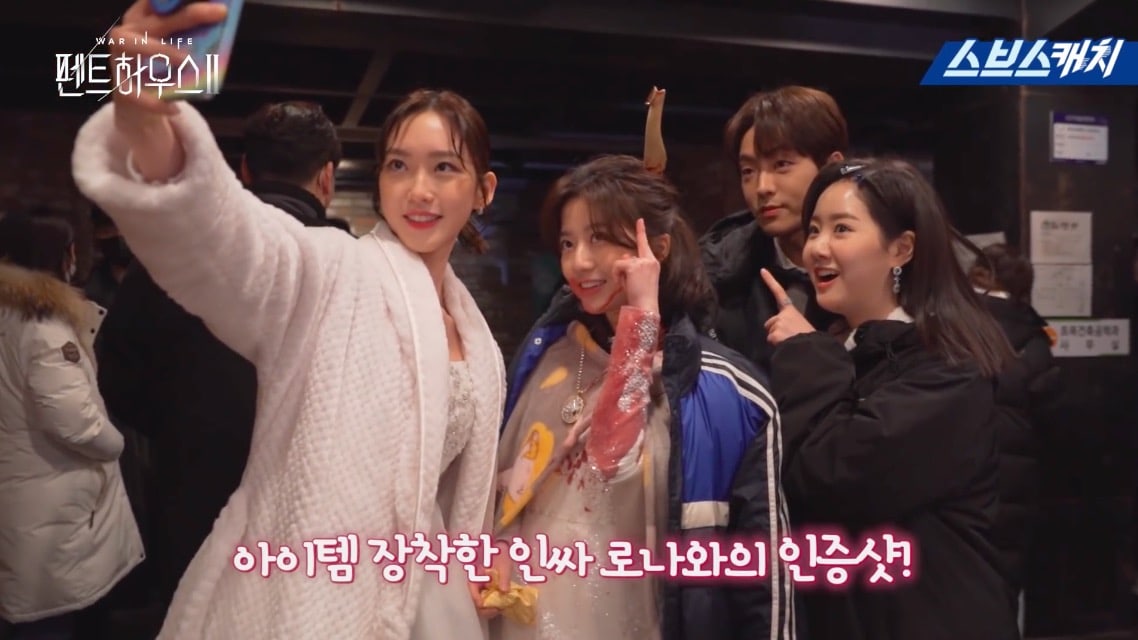 Eugene tells Kim Hyun Soo, “Honestly, when I was at home yesterday, I kept thinking about you. I was worried about how cold you’d be! It’s the coldest when you’re lying on the ground.”

“Still, today you’re hugging me,” says Kim Hyun Soo. Eugene says, “That’s right. I’m going to hug you with all my might!” 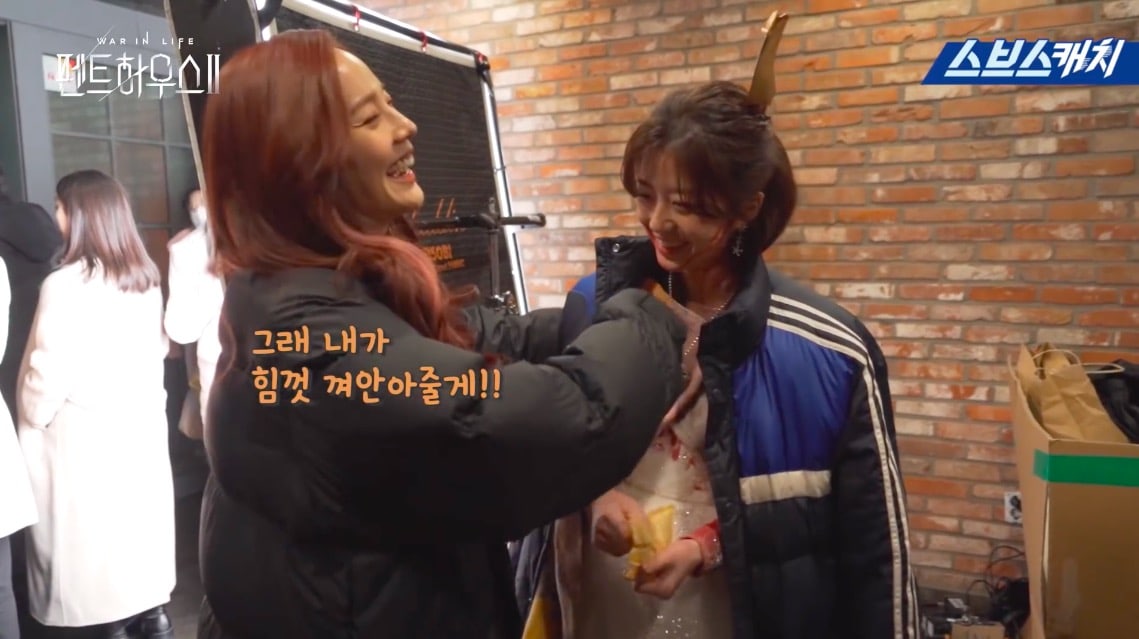 Everyone then gathers to rehearse the scene where the crowd rushes out of the hall because of the fire alarm, while Bae Ro Na lies motionless on the stairs after her fall. During the chaotic scene, Eugene holds Kim Hyun Soo, who’s wrapped in a blanket to keep warm as they rehearse. Kim Hyun Soo pops up with a big smile whenever the director yells cut, and Kim Young Dae also gets into character as Joo Seok Hoon, who’s distraught when he sees Bae Ro Na.

When the director yells cut, Eugene moves a heater for Kim Hyun Soo and fixes her blanket. Shin Eun Kyung (who plays Kang Ma Ri) also checks in to make sure that Kim Hyun Soo isn’t too cold. 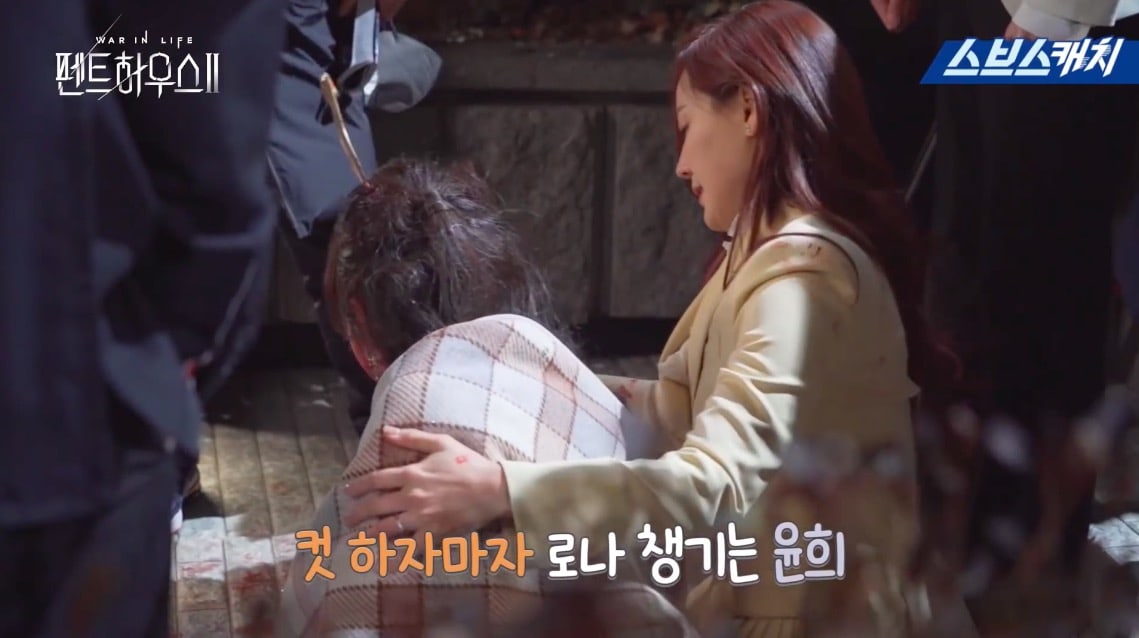 As they film the scene, Eugene takes Kim Hyun Soo into her arms and wails. Once the director yells cut, she continues to hold Kim Hyun Soo as she recovers from the intense emotions of the scene.

Later on, Kim Hyun Soo gets some candy and has the trophy removed from her hair. Eugene says to her, “Still, today’s better than yesterday, right?” Kim Hyun Soo agrees, saying, “Everyone was blocking the wind for me today.”