Watch: Lee Ji Ah Talks About Making Her Return In “The Penthouse 2”

“The Penthouse 2” shared a new look behind the scenes!

After the apparent death of her character Shim Soo Ryeon in the first season, Lee Ji Ah recently made a welcome return to the show as Na Ae Gyo, the birth mother of the twins Joo Seok Hoon (Kim Young Dae) and Joo Seok Kyung (Han Ji Hyun). In the March 6 episode of “The Penthouse 2,” Na Ae Gyo shocked Shim Soo Ryeon’s husband Joo Dan Tae (Uhm Ki Joon) and viewers alike by suddenly appearing in his penthouse apartment. The moment has garnered the highest viewership ratings for the season so far.

The latest making-of video features Lee Ji Ah returning to the set of Joo Dan Tae’s apartment after transforming into Na Ae Gyo. “Do I look a bit different?” she asks someone. They reply, “You look very different,” and she gives them a thumbs up, saying she’s glad. 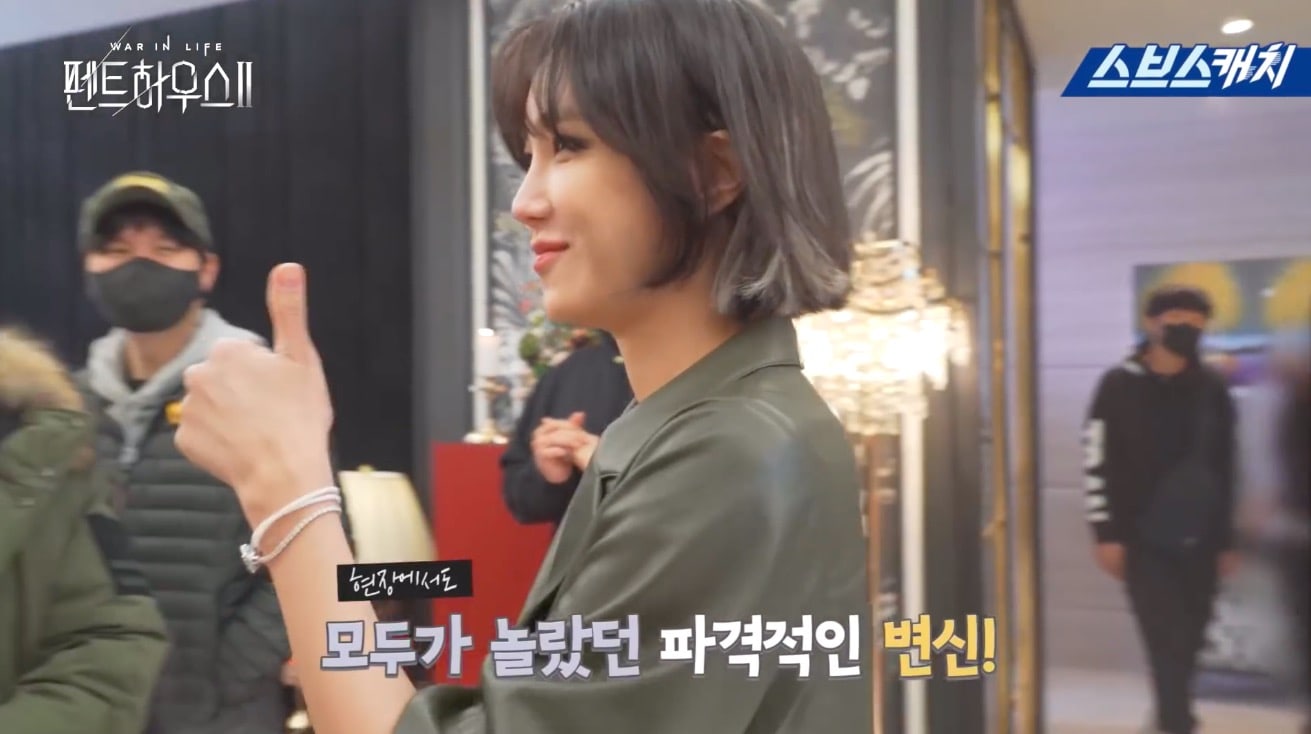 As Lee Ji Ah wanders around the set with her script, she gets a shock and says in surprise, “What—the bed’s changed!” She then realizes that it’s because the penthouse has been redecorated after Kim So Yeon’s character Cheon Seo Jin got together with Joo Dan Tae. She peeks around the set to see what’s changed, saying, “I’m curious.” 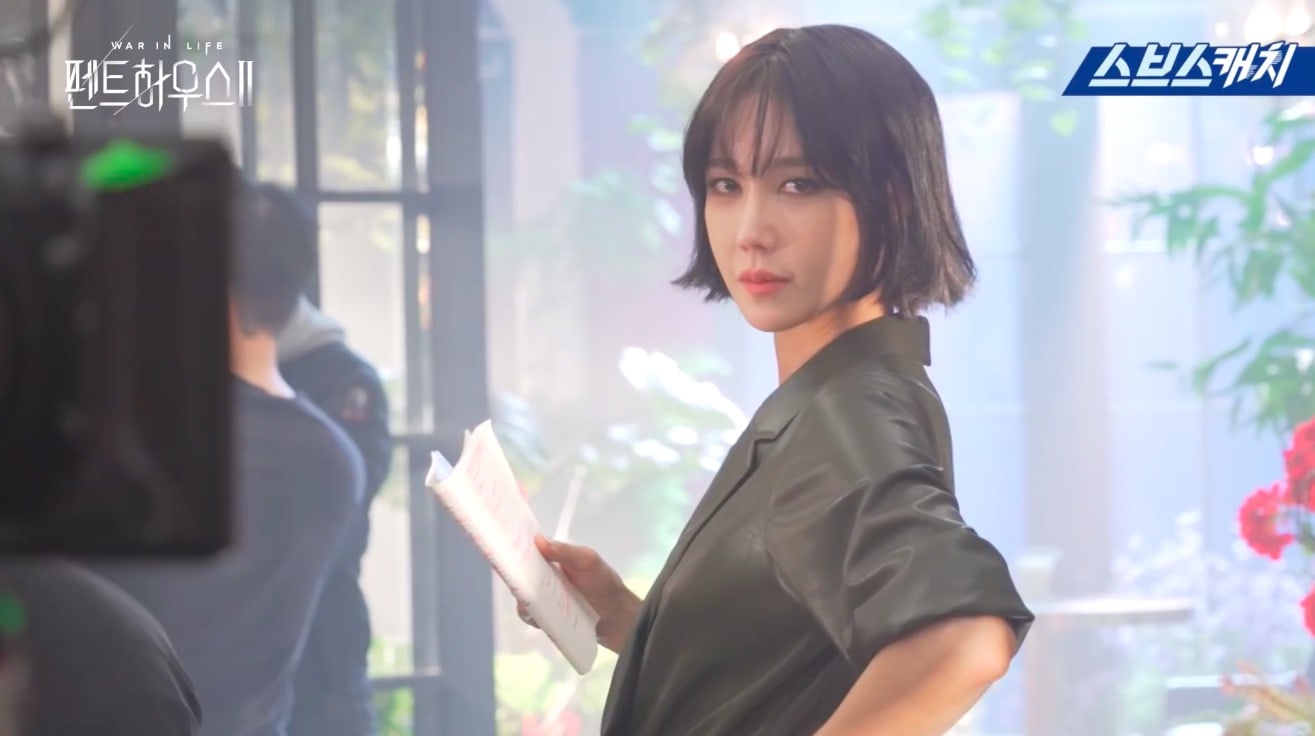 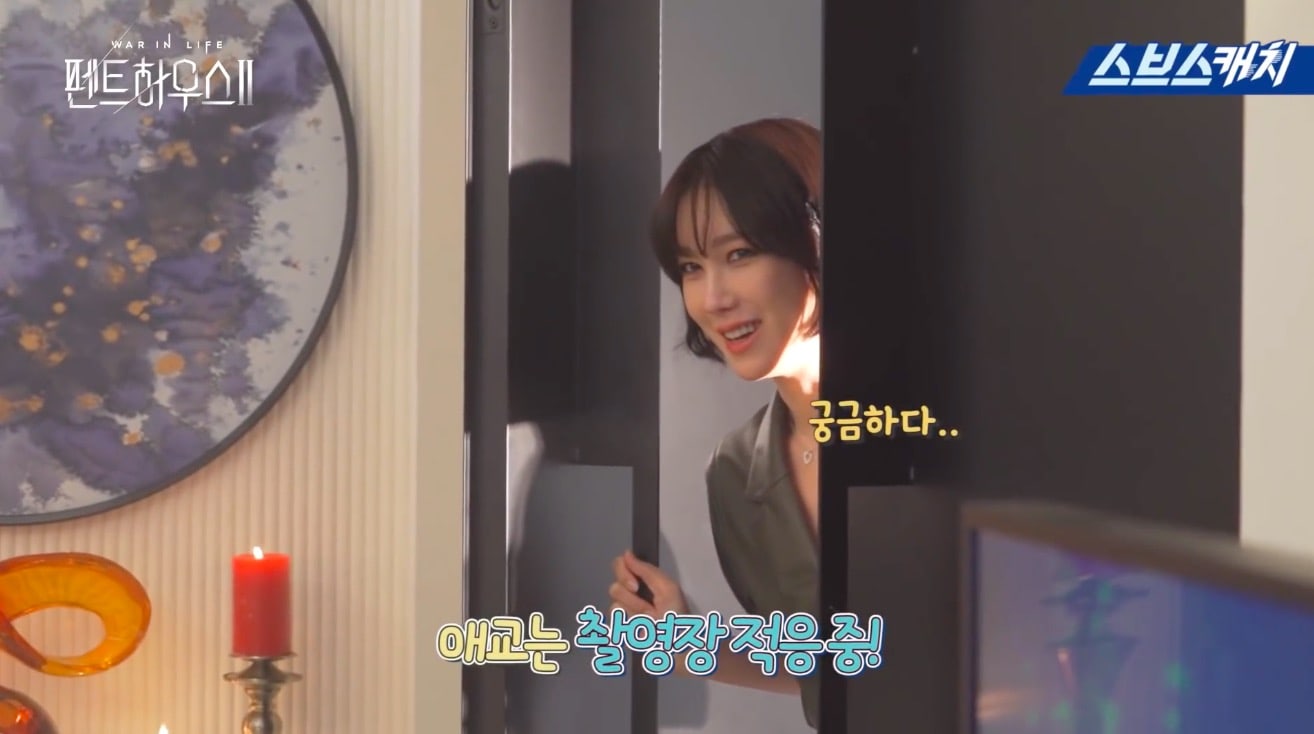 Lee Ji Ah and Uhm Ki Joon then rehearse and film the scene where she surprises him in his apartment and kisses him, and they go on to shoot their game of billiards.

The actress says in an interview, “Hello, I’m Lee Ji Ah playing Na Ae Gyo. I’m here for the first time in a while for my first shoot. This character’s personality is the complete opposite of Shim Soo Ryeon, so it was a bit hard and I felt nervous, but I had fun filming.”

“Please love Na Ae Gyo as much as Shim Soo Ryeon!” she says to fans. “Good Luck, ‘The Penthouse 2’!”

In the next part of the video, Kim Young Dae and Choi Ye Bin practice the scene where his character Joo Seok Hoon tries to kiss her character Ha Eun Byul and asks her to date him, as part of his revenge plan. As they shyly rehearse and figure out how they’ll act out the scene, someone off screen teases Choi Ye Bin by saying she’s blushing. “I think I’m going to blush!” says Kim Young Dae, and they both laugh. 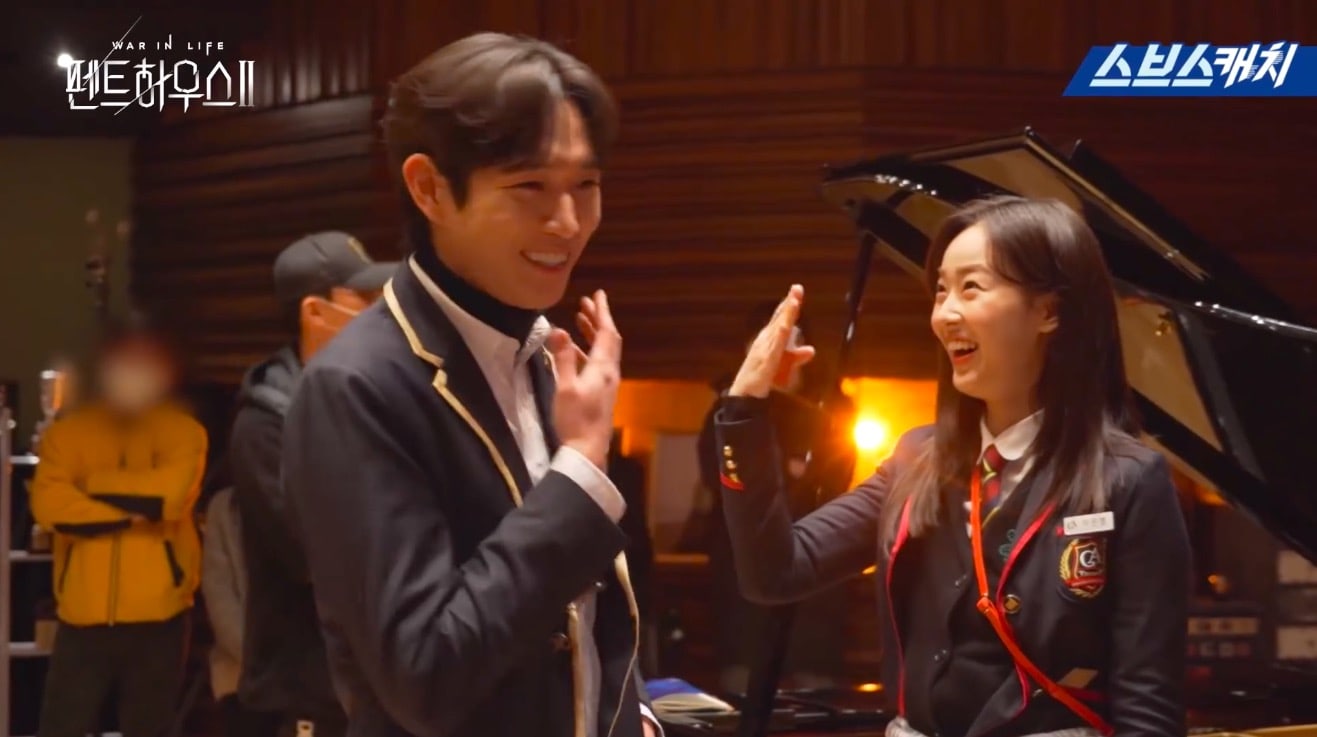 The making-of compilation also features Eugene and Kim So Yeon filming the scene where Cheon Seo Jin gets down on her knees to apologize to Oh Yoon Hee. The pair may be enemies on screen but the actresses laugh together while they wait for the shoot, and they then immerse fully into their characters and the dramatic emotions of the moment.

Check out “The Penthouse 2” here!