BLACKPINK’s Rosé opened up about her friendship with Girl’s Day’s Hyeri on “Ask Us Anything”!

On the March 20 episode of the popular JTBC variety show, Rosé made a guest appearance to promote her solo debut—with her close friend Hyeri in tow.

Hyeri explained, “Rosé’s here because she just released an album, but why am I here? I’m just here to cheer on Rosé.” Rosé chimed in, “I wanted to appear on [‘Ask Us Anything’ with Hyeri], so I called her and asked her to come on the show with me. Despite her busy schedule, she agreed to make time to appear on the show.”

Hyeri made everyone laugh in surprise by revealing, “I didn’t even tell my agency. I just told Rosé right away that I’d come on the show [with her].” She went on to explain, “From the moment Rosé called me, I thought, ‘If Rosé personally contacted me to ask me, this request must be a big deal for her.'” 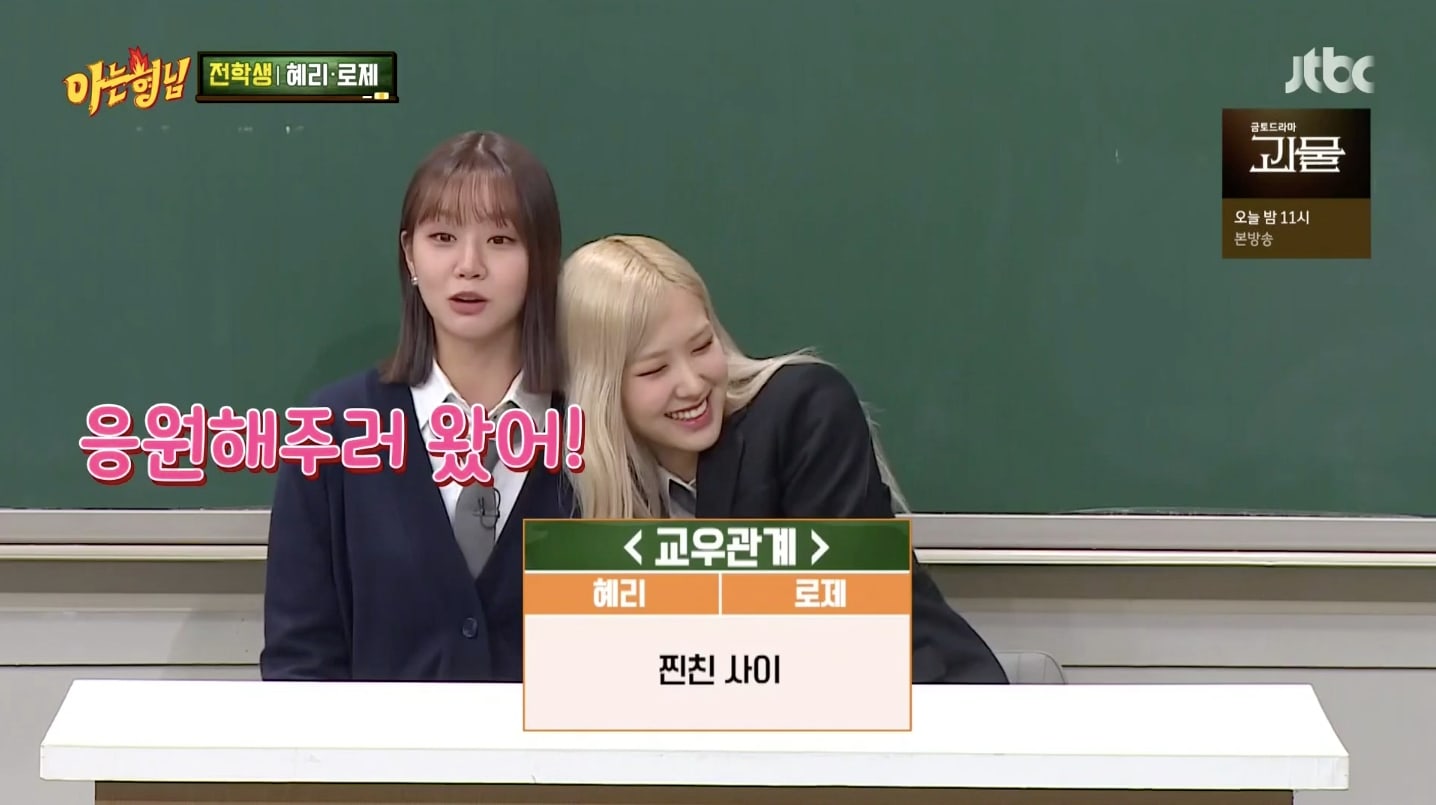 When asked how they had become friends, Hyeri shared that they had met when Rosé and Jisoo guested on tvN’s “Amazing Saturday.”

“I’m the same age as Jisoo,” said Hyeri, “and I don’t have that many friends who are the exact same age as me. So I was really happy to meet someone of the same age, and I told her, ‘Let’s be friends,’ and I also told [Rosé], ‘Let’s all be friends together.’ But Chaeyoung [Rosé’s given name] was so cute, and she contacted me so often afterwards that I opened my heart to her right away.” 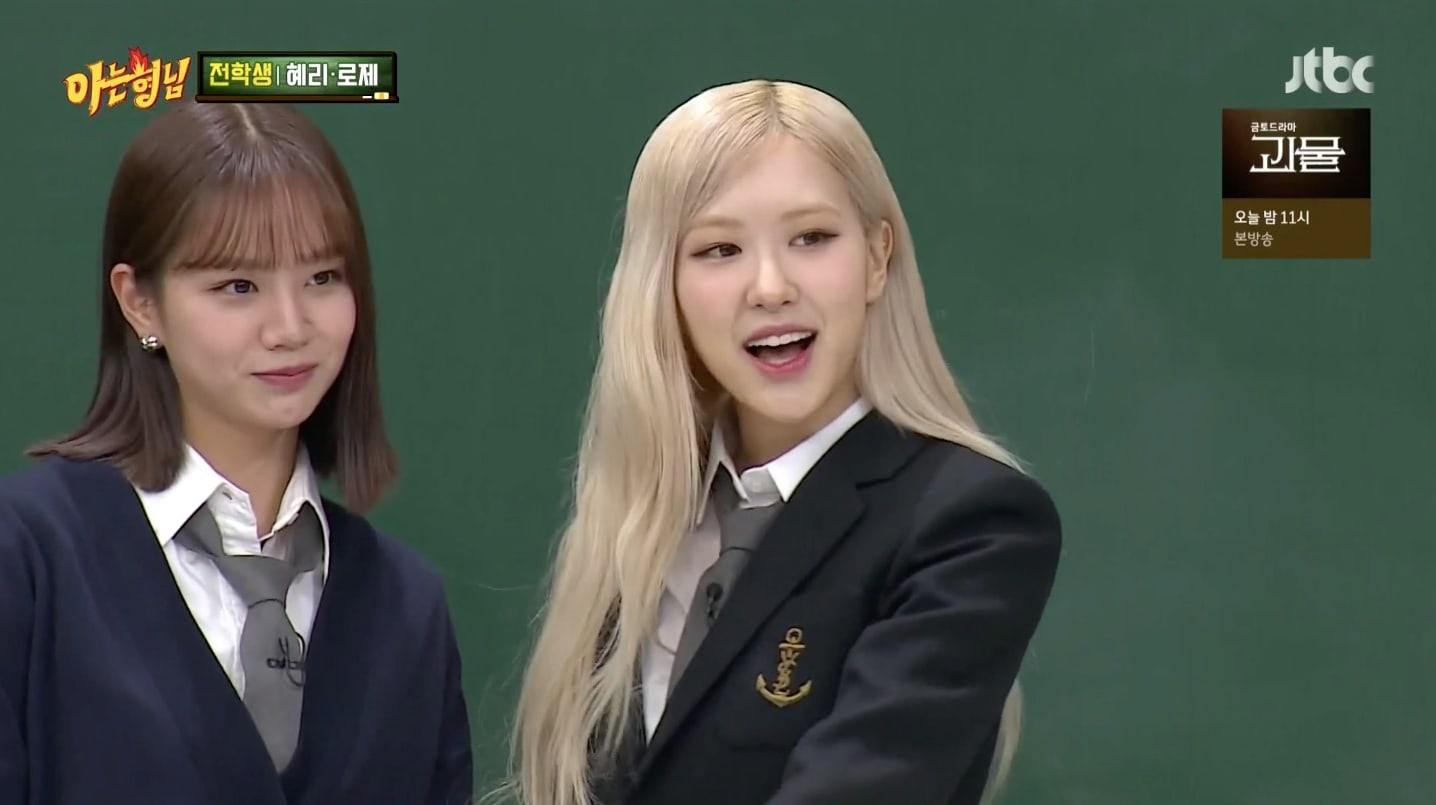 The cast asked what Rosé and Hyeri got up to when they hung out together, and the two friends replied that they typically chatted nonstop, ate delicious food together, and went shopping.

Rosé then shared a story about a time she was really impressed by Hyeri, recalling, “One time when we went to Noryangjin Fish Market, Hyeri was so cool. We were eating raw seafood at the market, and we were really wolfing it down—we were even sucking and slurping marinated crabs like this. But some foreign tourists took a photo of us from afar, and I worried, ‘Oh no, but we were eating [so unattractively].'”

Hyeri cracked everyone up by interjecting, “Because we were eating like this,” before demonstrating the passionate way they’d been devouring their food at the time. 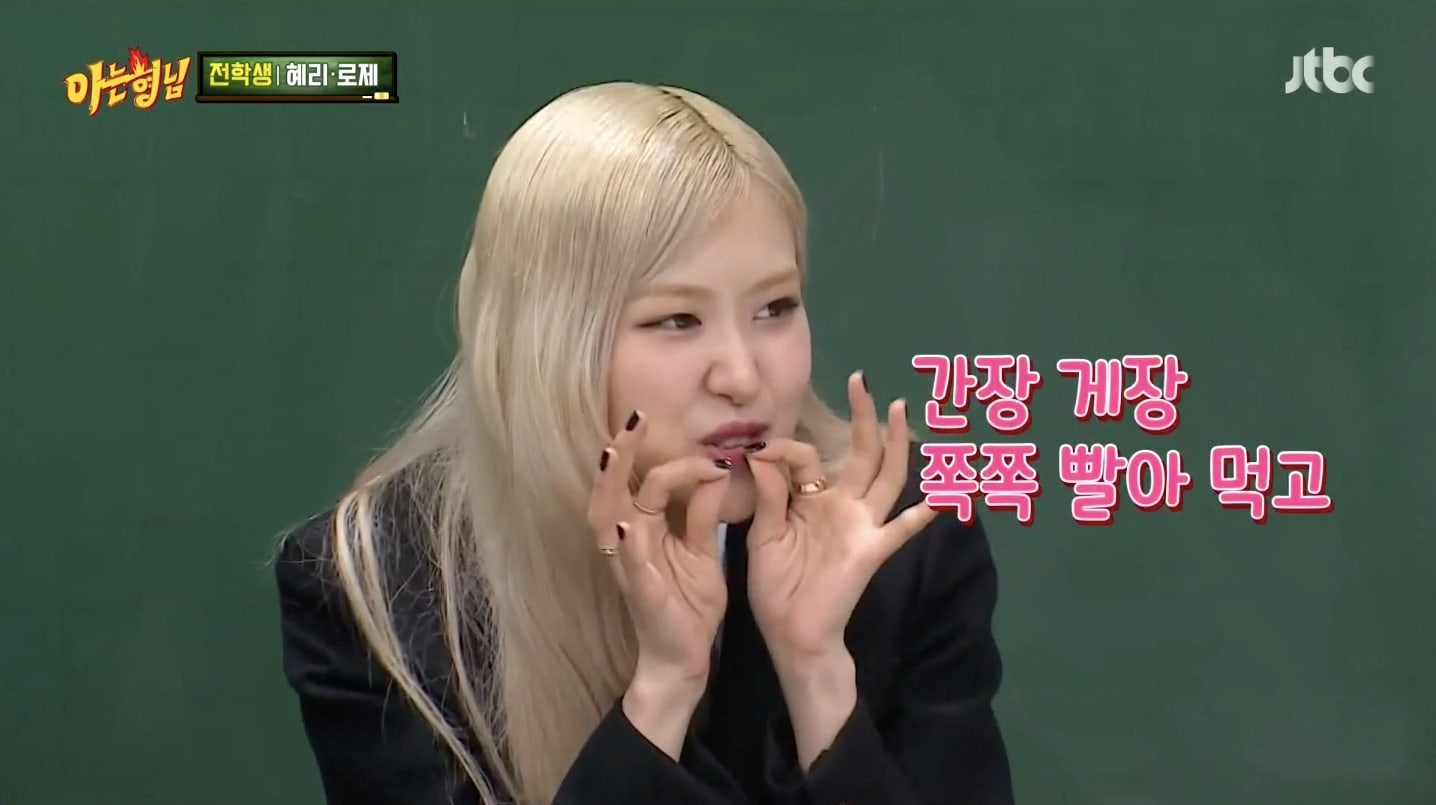 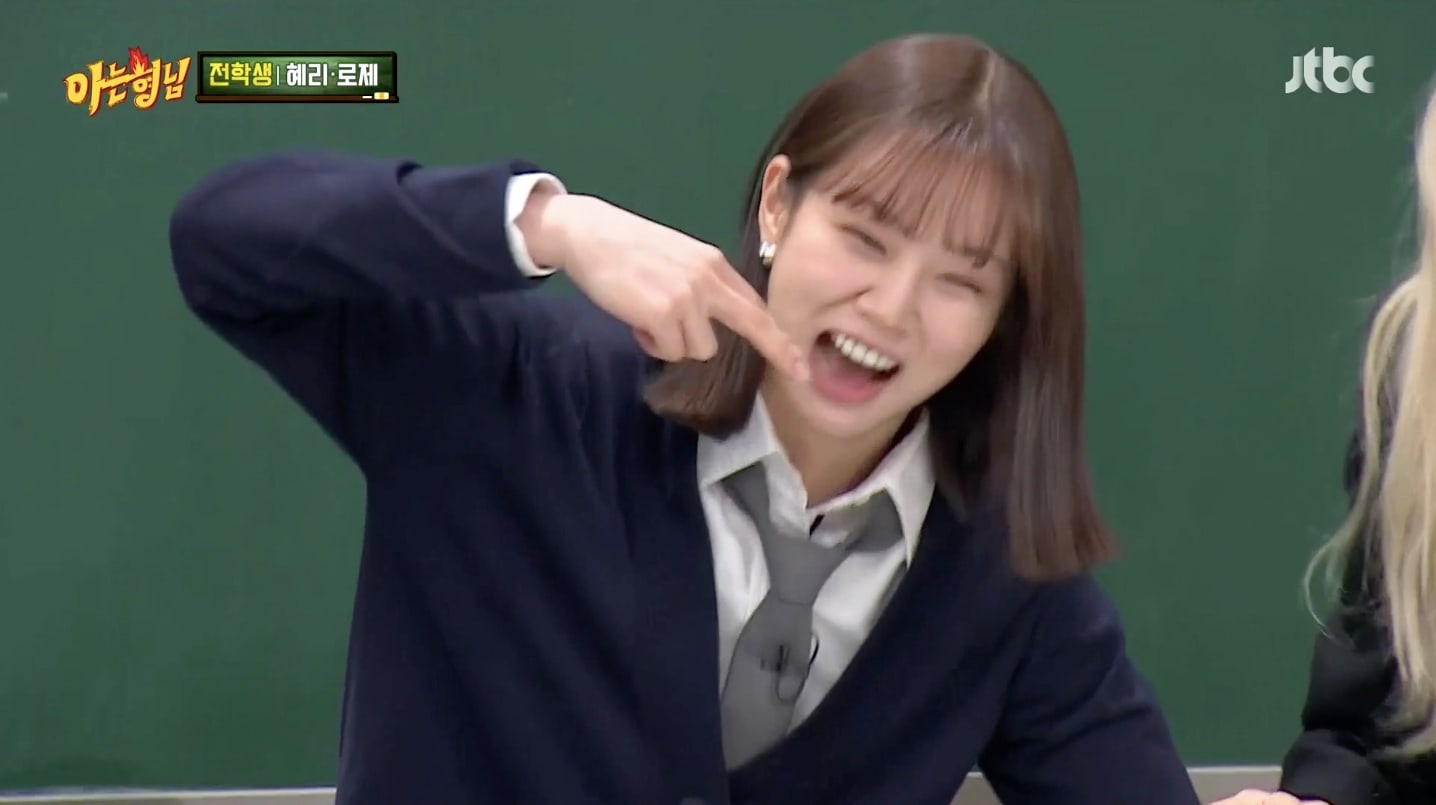 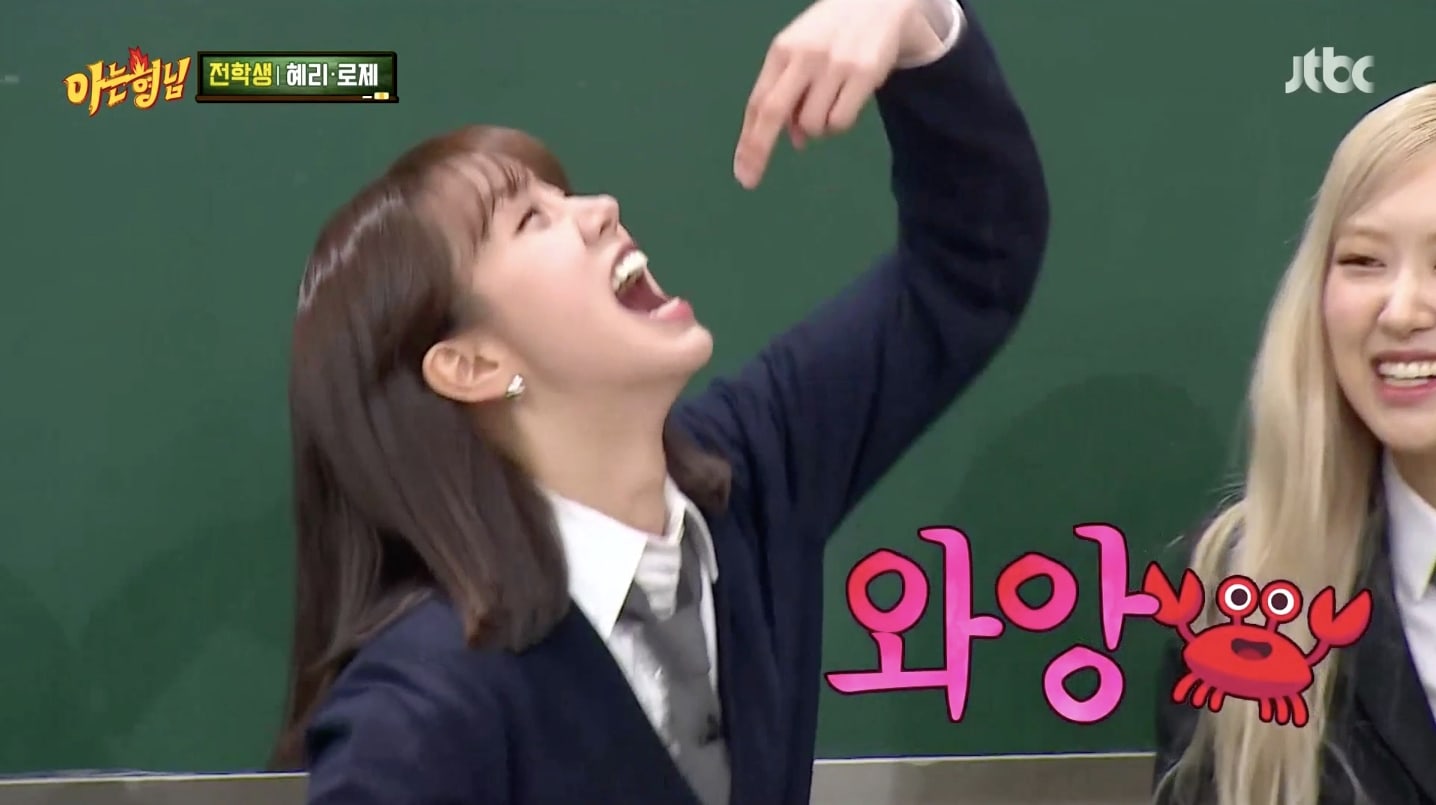 “So then [Hyeri] suddenly got up, and I was trembling in fear as she went over to them and asked [in English], ‘Excuse me, did you take a picture?'” continued Rosé. “Before she went over, she’d asked me what to say [in English], but I was surprised [by how firmly she said it]. I thought, ‘Wow, she’s amazing.’ They apologized and deleted it. She was so cool.”

Hyeri explained, “Because everyone’s so active on social media these days, one photo can make a lot of waves. And since Rosé’s a world star, I decided to step up for her.”

The two friends went on to reveal that since the pandemic began, they’ve been spending most of their hangouts at Rosé’s house instead of going out, and Hyeri frequently sleeps over. Rosé added, “Hyeri takes cares of me like a real older sister, and she’s never gotten angry at me or made me uncomfortable, not even once.” 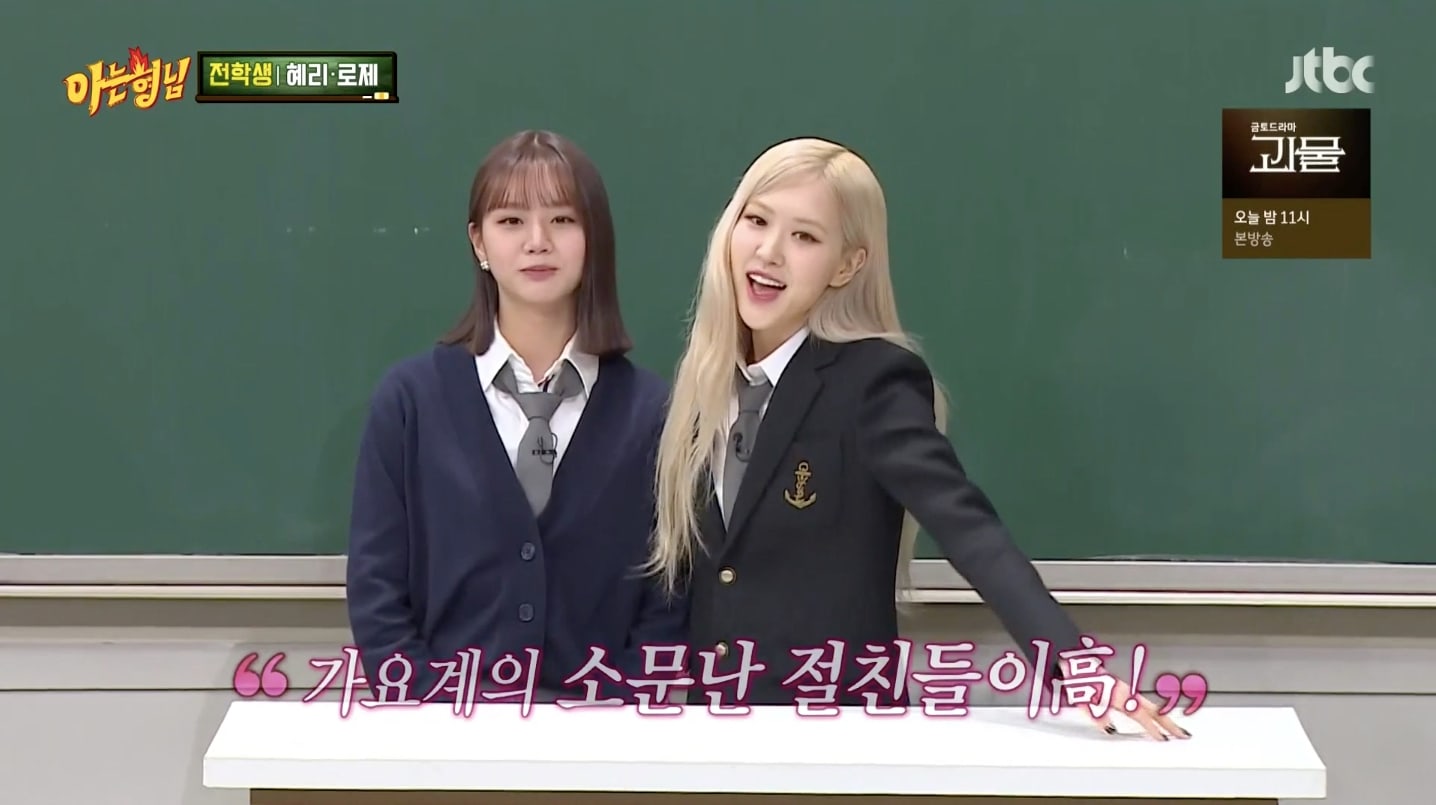 When the cast brought up the fact that Hyeri and Rosé are known to always show their support for each other by sending coffee trucks to the sets of one another’s dramas and music videos, Hyeri shared the story of the time she was most touched by Rosé’s thoughtfulness.

“It was my birthday, and Rosé was on tour abroad,” recalled Hyeri. “She wished me a happy birthday by text, and I replied, ‘Thanks! Do a great job [on the tour] and come home safe!’ But then suddenly, my doorbell rang. Someone had delivered a bouquet of flowers to my home. I wondered who could possibly have sent it, because no one knows my home address. So I looked at the bouquet of flowers, and it was from Rosé.”

“I live with my parents, so Rosé has never been to my house,” Hyeri went on. “So I was really curious how she figured out my home address, but she wouldn’t tell me.”

Rosé then revealed her secret: “I spent a lot of time thinking, ‘How can I get ahold of her home address?’ But then I remembered that Hyeri had told me about her younger sister, and she showed me her Instagram once. So I went back into my memories and found her sister’s Instagram account, and then I sent her a really long DM from my official Instagram account explaining who I was.” 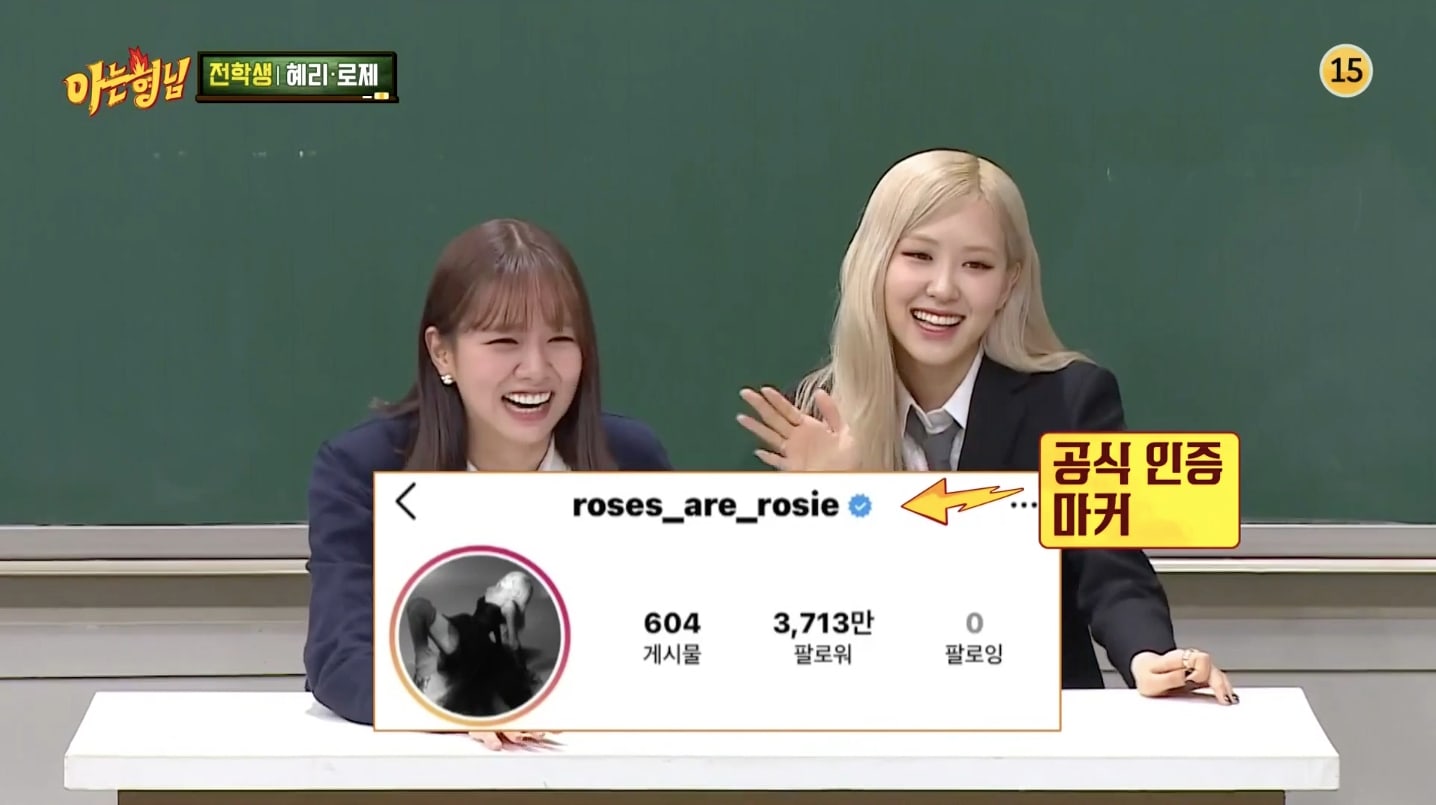 Finally, Rosé became emotional as she told the story of a time when she felt especially grateful to Hyeri. “We’d met up to eat together,” she shared, “and I had gotten rid of my stress by hanging out with her. It was time for me to go home. But just when I was about to leave, Hyeri suddenly grabbed me and asked, ‘Chaeyoung, are you okay?'”

Rosé teared up as she went on, “I don’t know why, but I was going through a really hard time back then, and you know how when things are too hard, you don’t want to talk about it? I was going through a rough time.” She then broke off as she wiped away her tears with an embarrassed laugh. “[Hyeri] told me it’s better to talk about things than to hold it all in, and she asked me what had happened. So I honestly told her everything while crying my eyes out.”

“What I remember from back then was that I felt so relieved,” she continued. “I’d spent several months struggling on my own, without telling anyone [about what I was going through]. But Hyeri asked me first [about it], and she became a friend I could really depend on.” 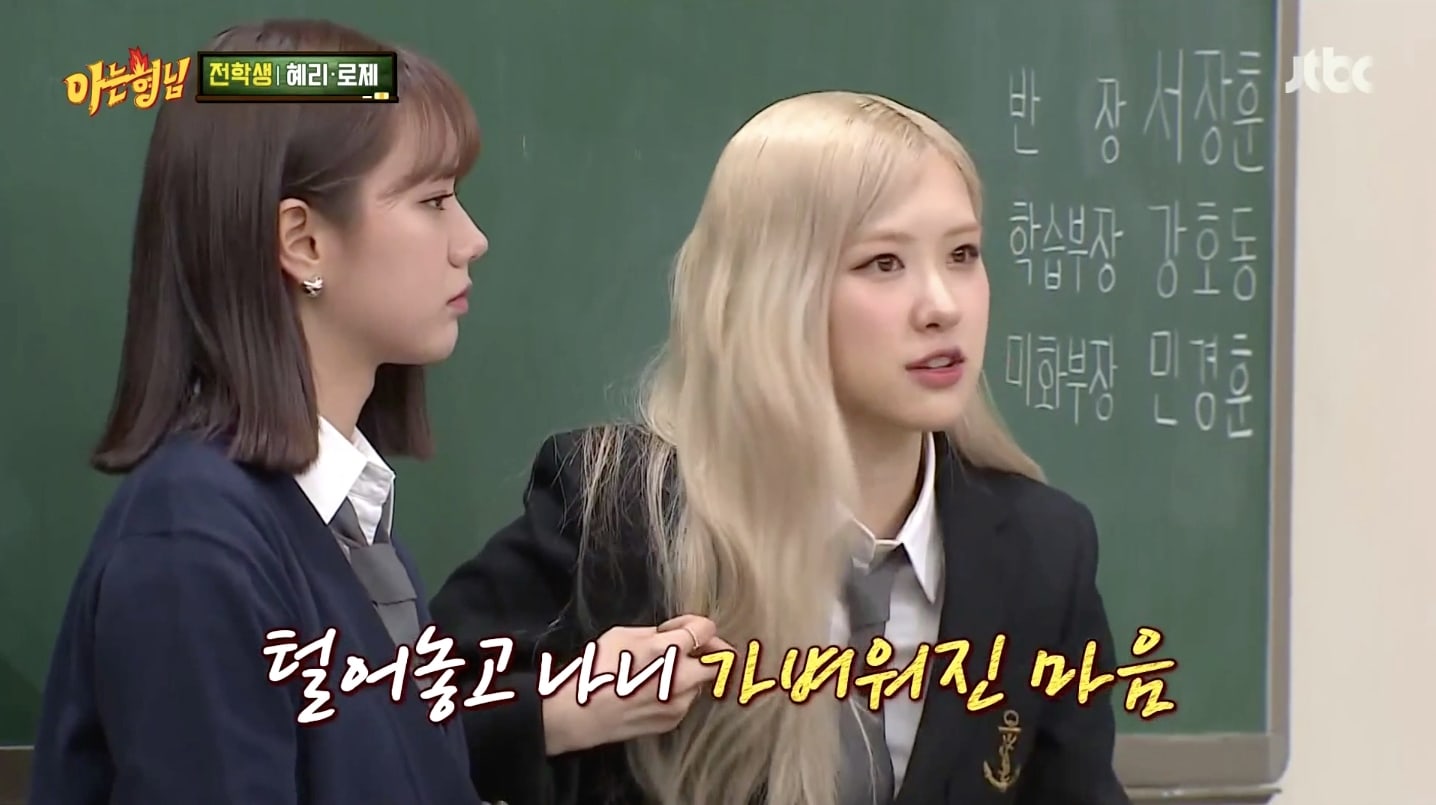 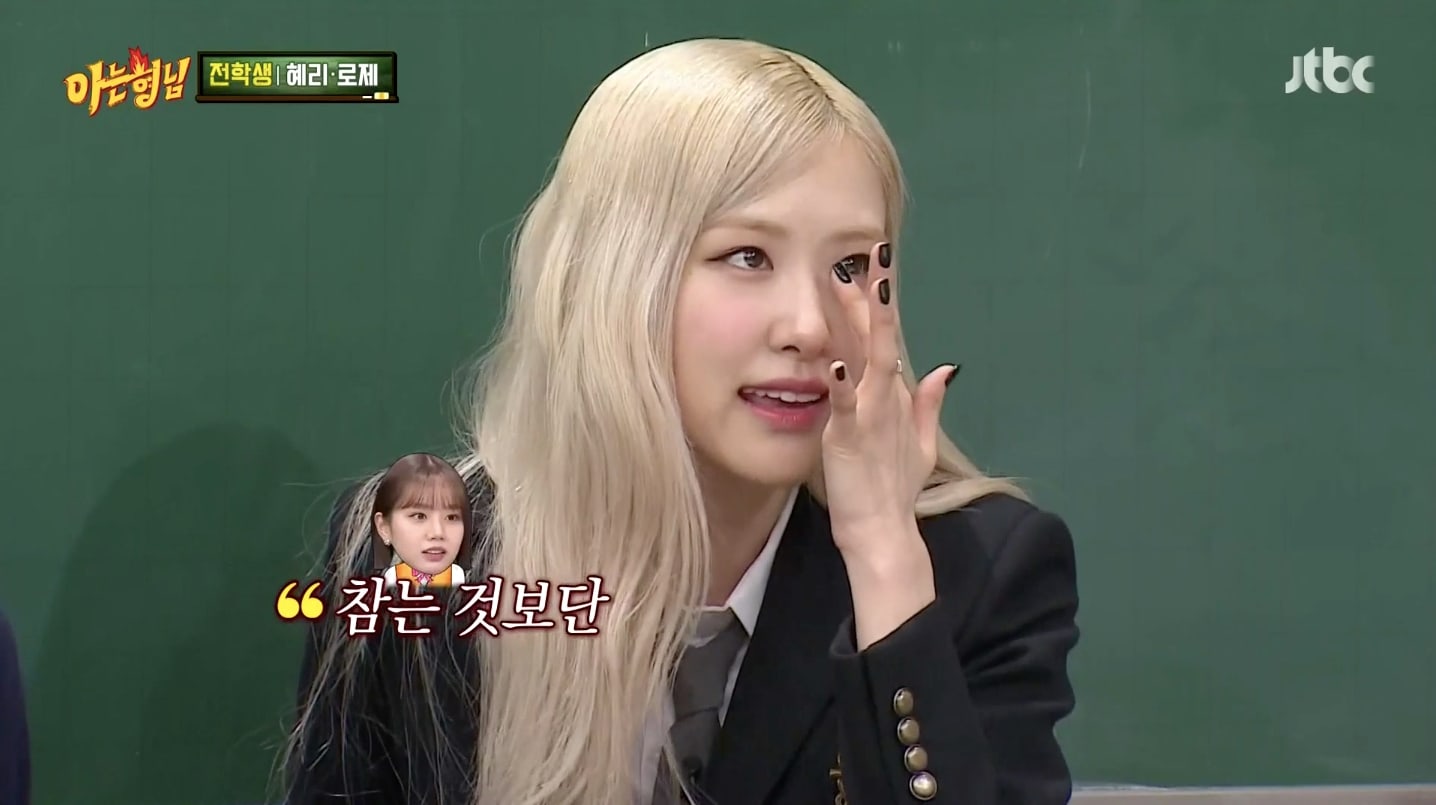 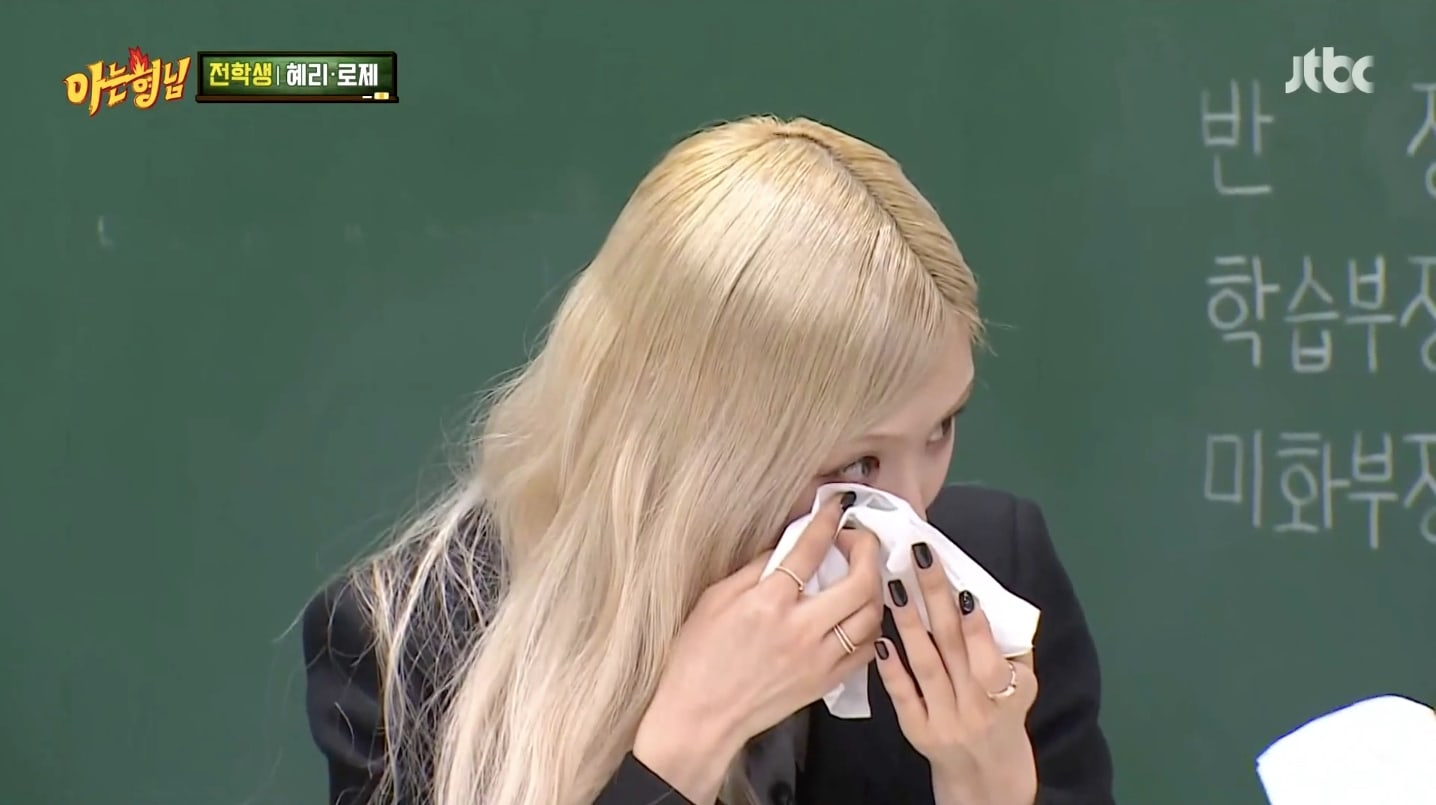