On March 23, SBS’s “Joseon Exorcist” released a statement about controversial props and food from the first episode.

In the scene, viewers noticed the Chinese mooncakes and the Chinese pidan (century eggs) on the drinking table. Beside those were also Chinese dumplings and what appeared to be a Chinese style liquor bottle with the Chinese character for liquor written on it. This led to backlash from viewers who said that this portrayal is a distortion of Korean history. 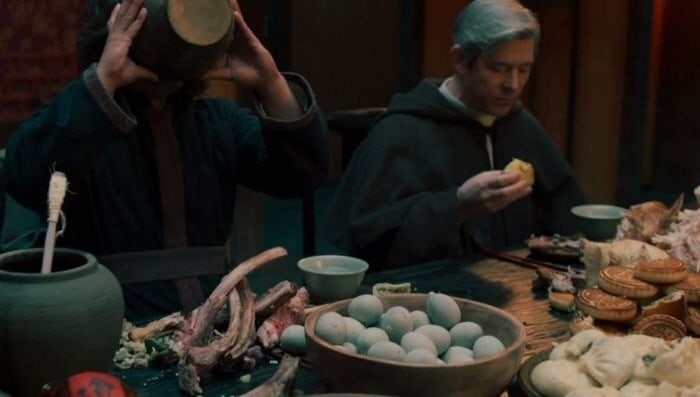 The following statement is provided by SBS in response:

This is the production team’s statement regarding the Chinese style props and food.

We set up the location as the vicinity of Uiju County (Ming Dynasty’s border) in order to emphasize the situation in which the third prince, Prince Chungnyeong, had to travel a long distance to the Chinese borders in place of the Crowned Prince Yangnyeong in order to bring back the western exorcist, and we added subtitles for this.

It was a location in which the western exorcist’s party could rest after traveling through the Ming Dynasty and just entering Joseon, and since it is a region that’s close to the border with the Ming Dynasty, we prepared the props while using our imagination that there would be frequent traffic of Chinese people.

This was just a setup to explain the location of these characters who were in a remote area far from Hanyang (Seoul) in the story, and there were no special intentions behind this at all.

We are sorry for causing discomfort during viewing through a scene that could be misunderstood during this sensitive time. We will pay close attention to the production in future broadcasts.

Watch the premiere below:

Joseon Exorcist
How does this article make you feel?