Lee Min Ki, Nana, And Kang Min Hyuk Talk About Why They Were Drawn To New Drama “Oh My Ladylord,” Acting Together, And More

The cast of “Oh My Ladylord” described what attracted them to the drama during a press conference on premiere day!

At a press conference on March 24, the three stars shared that they chose to join the cast because they were drawn to the show’s message, its heart-warming romance, and their roles.

Lee Min Ki shared, “First, I liked how bright the show is. I also liked that the writer had a clear idea of the message he wanted to convey, and I was pleased to see this character that would allow me to try many new things. I chose it because I liked the romance and the message about life.”

Nana described her character as lovely, cheerful, and warm, saying that she sees Oh Joo In as similar to her own self. “Most importantly, I’d been wanting to try doing a romantic comedy, and so when this script for a warm romantic comedy came in, I said yes without hesitating at all,” she said.

Kang Min Hyuk commented, “I enjoyed how the drama overall was very warm.” He added, “Beyond just the character’s external appearance, he’s warm and cool in his personality and thoughtfulness. I thought that Yoo Jin’s easygoing nature seemed cool, so I tried to portray that well.”

Producing director Oh Da Young also raved about the cast. “I felt like Lee Min Ki is a ‘god of romantic comedies,'” she said. “I’ve learned a lot from him.”

She said about Kang Min Hyuk, “If you think about a ‘male friend’ character in a simple way, it’s possible for a love triangle to seem boring. However, watching Kang Min Hyuk gave me a lot of hints. I tried to capture Jung Yoo Jin using Kang Min Hyuk’s own personality.” 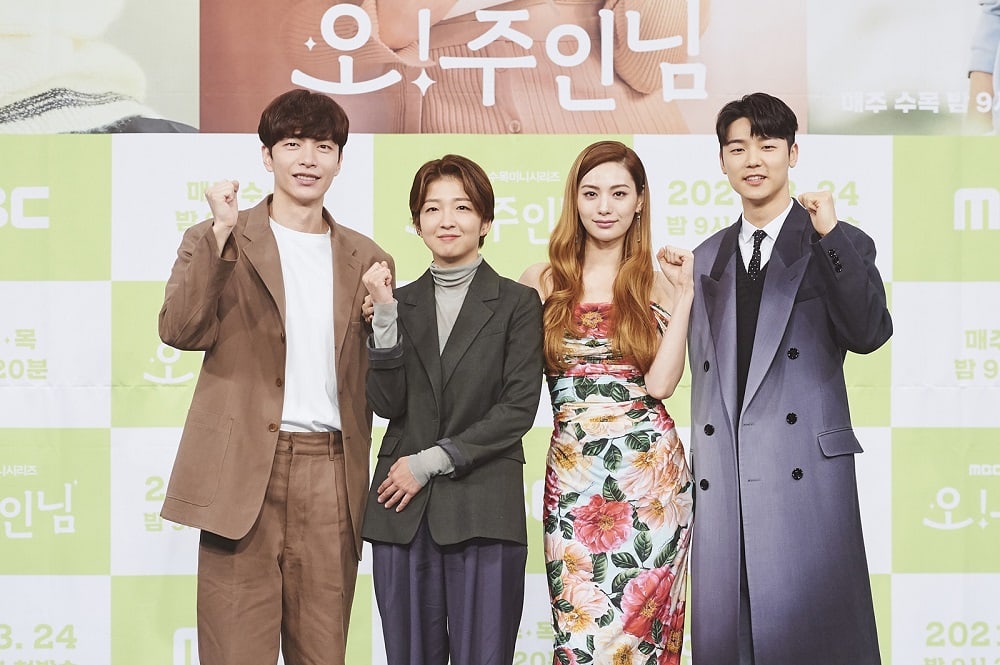 Lee Min Ki and Nana talked about acting out their romance in the show. Lee Min Ki shared, “Nana plays a warm character, but she’s also warm and kind herself. When a problem occurs, rather than quibbling over who was right and who was wrong, she accepts the situation and she uses her energy in a warm way.”

Nana said, “Lee Min Ki’s eyes are so expressive. When I look at them, I right away find myself feeling the emotions of the scene.” She added, “It’s an honor to work on a romantic comedy with a ‘master of romance.'”

Kang Min Hyuk and Nana also talked about filming in school uniforms for the show. Kang Min Hyuk, who completed his mandatory military service last year, shared, “I was wearing a military uniform a year ago, so it felt awkward to put on a school uniform again. It made me want to go back to my school days.” He said with a laugh, “People still tell me that I look good in a school uniform, but I can tell that that’s gradually becoming not the case.”

Nana commented, “I also enjoyed wearing a school uniform. Kang Min Hyuk looked great in the uniform. This is really a behind-the-scenes story, but we took high school photos. I didn’t have bangs, but they edited them in. I think they were aiming to make me look a bit younger. I definitely didn’t have them, so I wondered when they appeared.” The actors were both born in 1991, with Kang Min Hyuk born in June and Nana in September. Nana made everyone laugh when she said, “The photos turned out well, but I look older than Kang Min Hyuk.”

As the press conference wrapped up, Nana shared, “It’s a drama that everyone can enjoy watching together, particularly as a family.”

“Oh My Ladylord” made its premiere on March 24.

Watch Nana in “Into the Ring” below!