BTS made their highly anticipated appearance on tvN’s “You Quiz on the Block” on March 24!

As the sole guests on the show for the episode, BTS met with hosts Yoo Jae Suk and Jo Se Ho to talk about their trainee period, their skyrocketing success, and more.

The members shared that they were fans of “You Quiz on the Block” and that all seven of them had chosen the show as one they wanted to appear on when their agency asked. 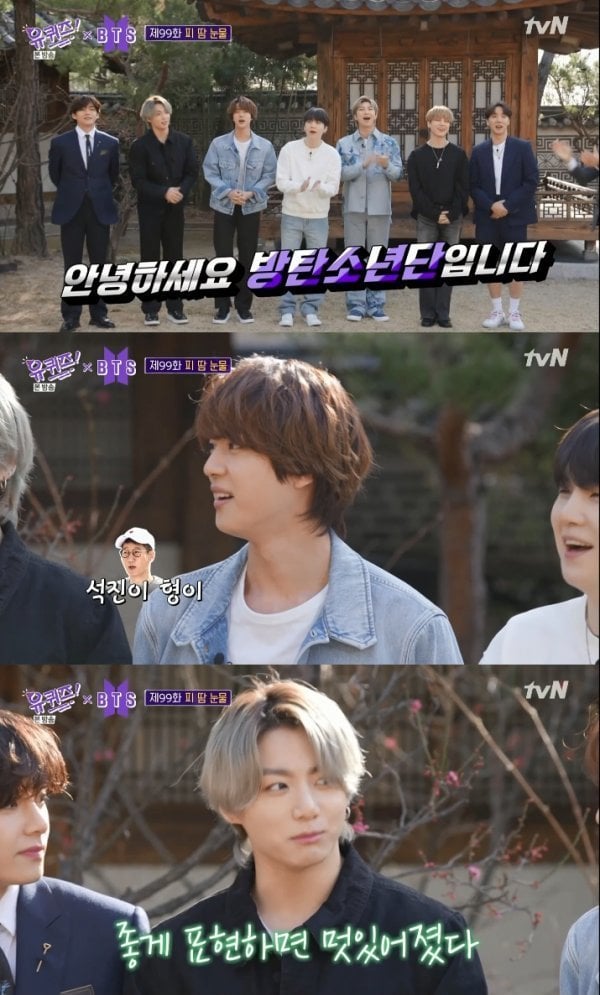 Suga added, “Our fans are special to us. In the American music market, radio play is important. Our fans opened that gate for us. We were wondering if it was possible, but they spread word about us by sending in requests to radio DJs.” It was also mentioned that ARMY had come together to purchase the commercial breaks in the middle of the “You Quiz on the Block” broadcast. 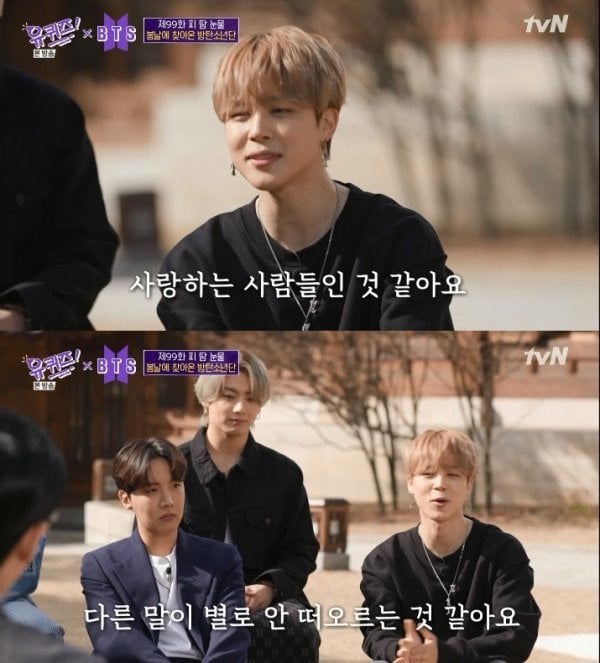 During the individual interviews, RM and V talked about the first time they met. RM said, “It was September 2011. We were living in a two-room apartment in Nonhyeon-dong. At the time, V had a shaved head. The first time he came in the dorm, he looked around the rooms. He looked like someone who wouldn’t listen well.”

RM went on, “There were a lot of trainees then. About 30 people passed through the Nonhyeon-dong dorm at some point. Seven of those people became who we are now.” V added, “At first, it was sad when one of the trainees had to leave. But later I got used to it. I often said, ‘Are you going?’ and then, ‘Come visit sometime.’ The hardest part was when I wasn’t able to see my parents often. Even when they came up from Geojedo to see me, I could only see them for half an hour. It was really hard then. But later I became used to that too.” 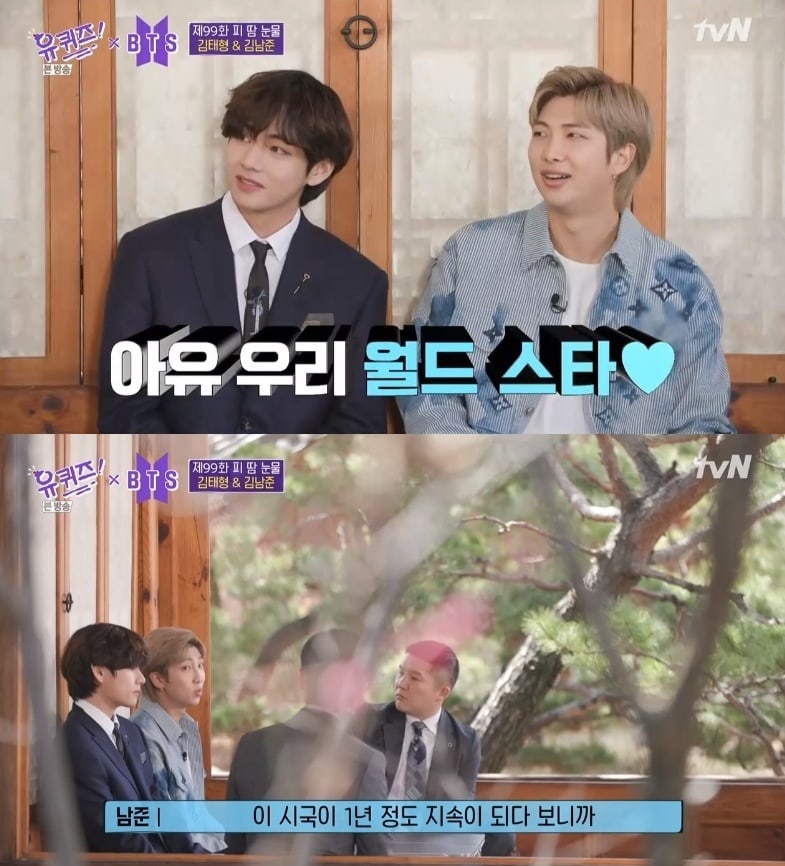 V also shared, “When trainee life became too much, I called my dad in tears and said that I wanted to give up. My dad replied, ‘If it’s too hard, you can quit. There are lots of other jobs, so let’s find something else.’ I was at a loss for words. I became embarrassed that I’d even said the words out loud. After some time passed, I realized how moving my father’s words were.” 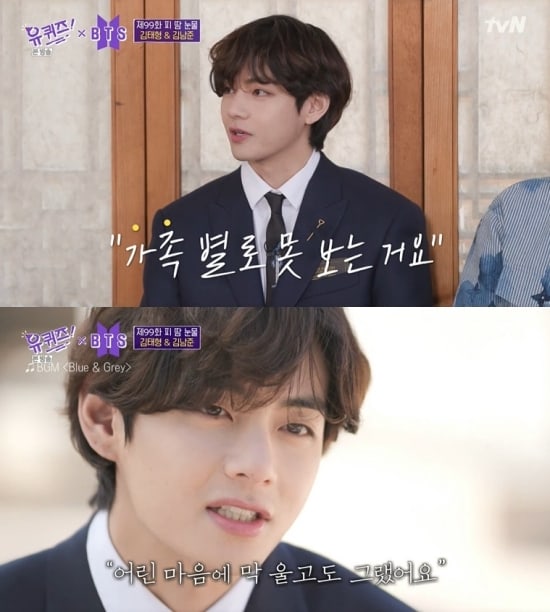 Jimin, Jungkook, and J-Hope also spoke about the difficulties of their trainee period. J-Hope said, “It was really tough when all of us shared a single room.” Jungkook added, “I was the youngest. I had to wait for the others to fall asleep before I could shower. I used the top bunk and I had to be really careful not to make noise.”

Jimin said, “I was the latest of the members to arrive as a trainee. I went in with such high hopes. But when I went to the dorm, there were shoes all the way to the kitchen. I wasn’t in the dorm with the status of a ‘BTS member,’ and I didn’t live in Seoul, so I was always apprehensive about when I’d have to leave.” 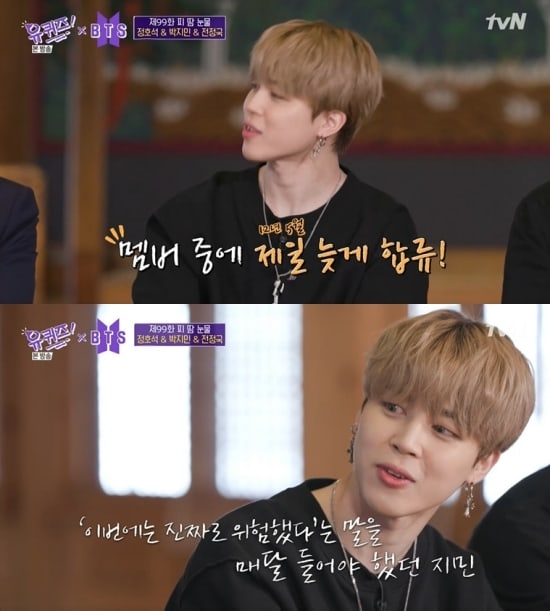 J-Hope and Jungkook talked about the time they had fought because of a fruit basket, while Jimin and V talked about their argument over the bunk beds. J-Hope said, “I had to give up on a lot [to be a trainee]. It was something I really wanted to do, so I endured. But it was really hard when people asked me when I was going to debut.”

Jungkook said, “I think that all the difficulties and scoldings that I went through made me who I am today. That’s why I’m grateful to the other members. I was so scared when I first came up to Seoul. I missed my parents and I cried. After I made my debut, I could feel the comparisons to other vocalists in other groups. I wondered if I was really cut out to be the main vocalist. From then on, I stopped thinking of vocal practice as something to be scheduled, but I practiced wherever I was.”

Jimin said, “At first, it was hard because I didn’t know what I needed to do. When I saw V and Jungkook practicing, I would follow them but I felt rushed.” Jungkook interjected to say, “I think that Jimin is the strictest on himself out of all the people I know.” Jimin continued, “I slept at 4 a.m. and woke up at 6 a.m. I repeated that cycle for a while. I called my dad and he said, ‘Even if you don’t make it, just don’t get disappointed in yourself.’ The members filled in what I lacked. I got a lot of help from them.”

When asked about their current concerns, J-Hope said, “Nothing is forever. There’s something Suga said in the past: instead of a sudden plunge, it would be preferable to end on a safe landing. I think that he’s right about that.” 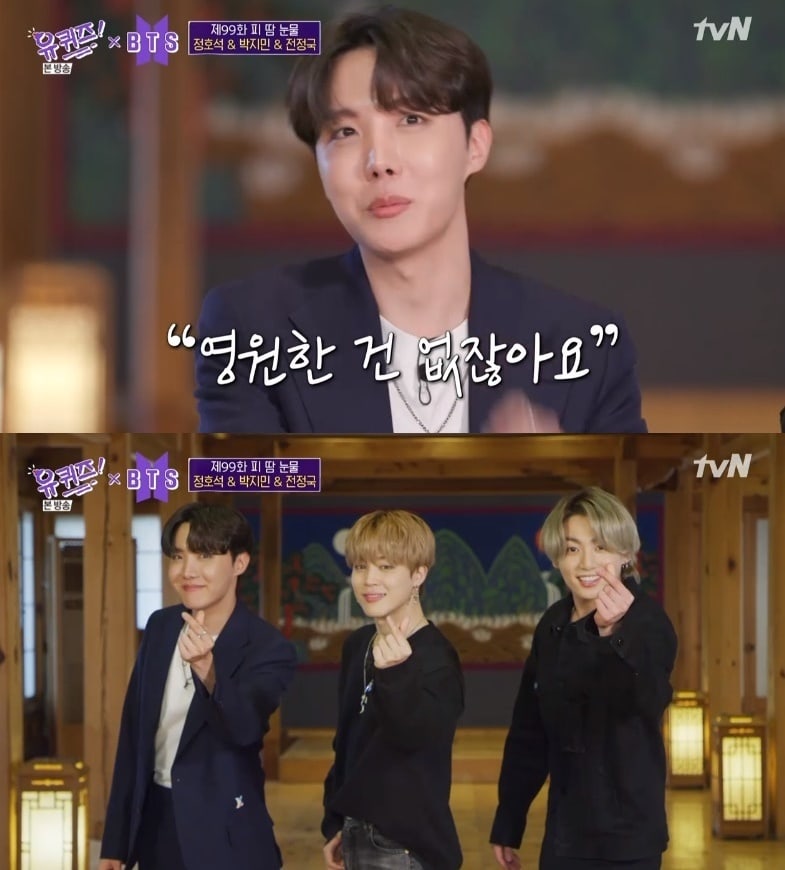 Jin and Suga talked about becoming the oldest members on their team after growing up as the youngest members of their families. Jin said, “Until high school, my older brother was the person I hated most in the world.” Suga said, “I also didn’t get along with my brother.” The two members joked that their brothers’ attitudes had changed after BTS found success. Jin also shared his story about how he had been cast on the street for his good looks and said that his original dream had been to become an actor. 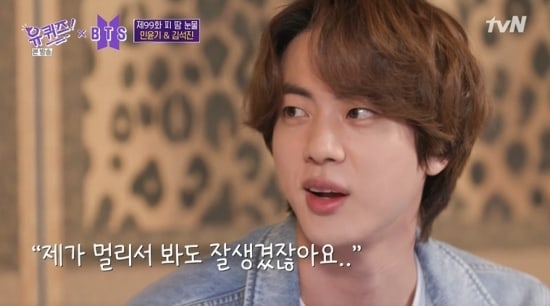 Suga said, “A lot of people ask us how we get along so well. I tell people that it’s because we fought a lot. We really fought so much. But we always resolved them within 24 hours. That was the rule we set for ourselves.” 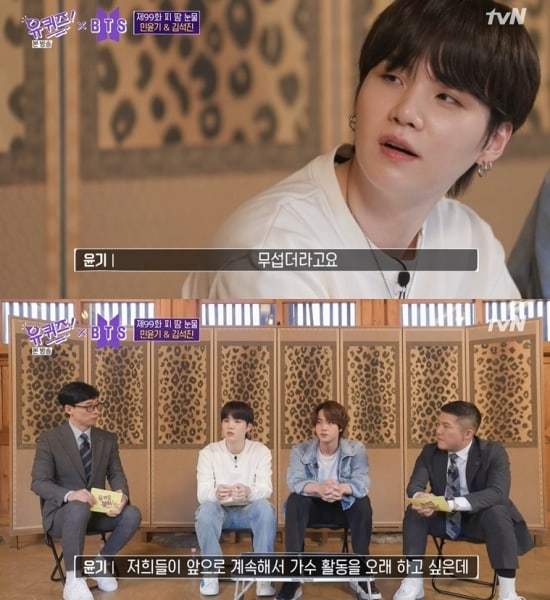 Suga also shared his complicated feelings on BTS’s record-breaking success. “When something you never wished for comes true, there’s a huge sense of pressure,” he said. “Idols don’t have long careers, so I thought that I would stop being an idol after achieving things like getting No. 1 on music shows and holding a solo concert. After my career as a singer was over, I thought I’d become a producer. But suddenly we were off to America. I had no idea we would go to the Billboard Music Awards.”

He continued, “We went to these American awards shows and I was so scared. There were no senior artists we could ask about what to do. I was the most nervous during our first performance in the United States. I went to the hotel and cried because this wasn’t what I had wanted, I hadn’t wanted such a high-pressure situation. I was really scared because I knew this was just the beginning. Of course it was an honor and we were grateful, but I wondered if this was the right place for us and if we had really wanted to come this far.” 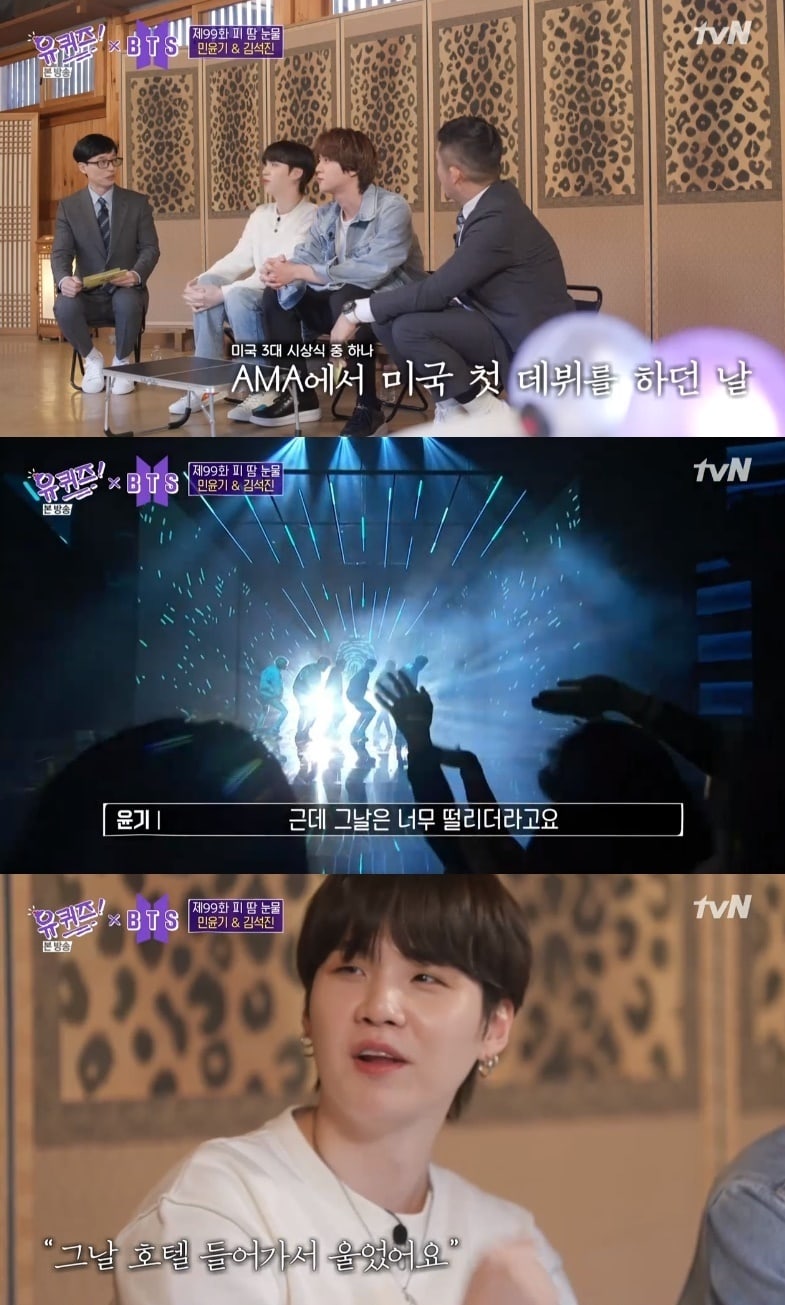 BTS
You Quiz on the Block
How does this article make you feel?