BTS Talks About Their Grammys Nomination And Performance, Their Love For ARMY, And More On “Let’s BTS”

Hosted by Shin Dong Yup and Jang Do Yeon, the talk show special featured BTS giving special performances and talking about their recent nomination and performance at the 2021 Grammy Awards, their love for their fans, and more.

After BTS opened the show with a performance of the Slow Jam remix of “Dynamite,” notable soprano Jo Sumi appeared via video call from Rome to talk about BTS’s Grammy nomination. Jo Sumi won a Grammy for Best Opera Recording in 1993 and has been nominated for others. She said, “I got into K-pop through BTS and I can feel their fame rising more and more. In Rome, there’s a cappuccino drink with Jimin’s name, and when I covered V’s song, people from all around the world came to listen.”

Park Ji Sung, a former soccer star who is currently living in London, sent in a video message that said, “When I went to be a commentator at the 2018 World Cup, BTS songs played in the stadium. I never thought that that would be possible. As I heard BTS play in the World Cup stadium, I realized how amazing their popularity was.” His wife, announcer Kim Min Ji, said, “In England, I’ve heard people on the street singing along to BTS.”

RM said, “It was the most surprising moment of my life. A lot of the major categories had passed by, and just as I thought that we wouldn’t be nominated for a main award, ‘Dynamite’ came up right in the middle. I really threw my phone. Our parents told us that their hearts used to skip a beat when we first came on the news.” J-Hope added, “It was to the point that even my grandmother talked about it.” 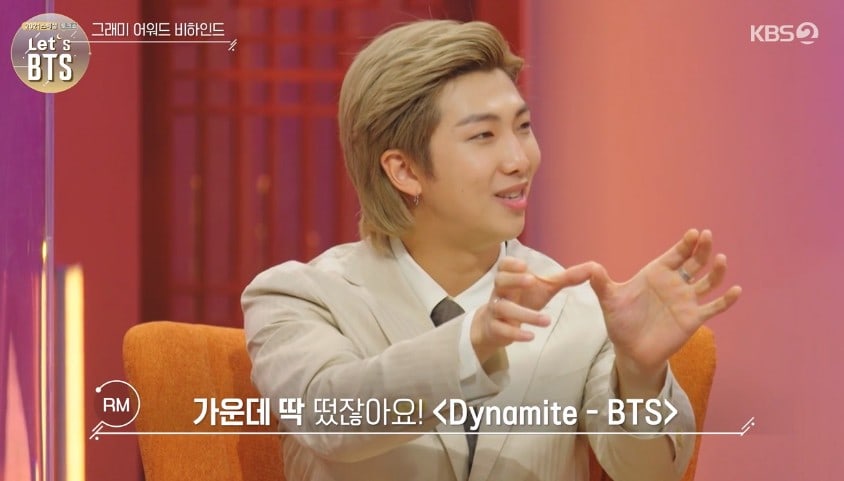 BTS’s performance, which was filmed separately in South Korea, aired at the very end of the 2021 Grammy Awards. Jimin said, “We thought we would definitely appear first, so we were waiting, but we came out at the end.” Jin said, “We filmed the performance in Yeouido and RM said that we should do well because this was something our grandchildren and great-grandchildren would see. Even if it was just a small mistake, we would keep working hard. We had planned for about two hours, but it ended up being around four to five hours.”

BTS shared their regret at not winning the category for which they were nominated, but RM said, “But we rationalized it. We focused on the fact that there are only about 20 teams who get solo performances [at the Grammys]. I think that we’re satisfied with the first bite. Now that we’ve made our mark, I think that the public consciousness of us will rise.” 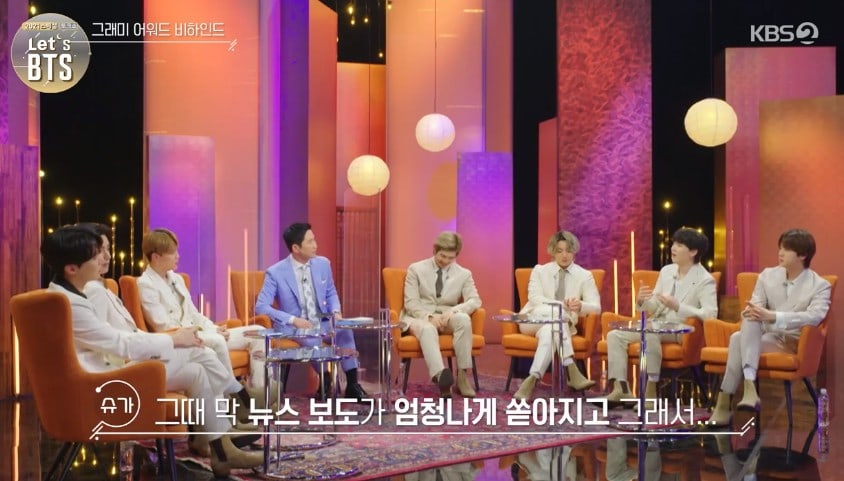 BTS also reflected back on their musical career. RM said, “It was important for us to put in each album the stories that we wanted to tell.” He added, “We did a ‘school’ series and never got No. 1 on a music show, so there was a sense of urgency, struggle, and desperation [leading up to ‘The Most Beautiful Moment in Life’ series].”

When asked if they had songs that brought them comfort, Suga said, “Last year, all the members struggled with not being able to perform. I got a lot of real comfort from our songs ‘Answer: Love Myself’ and ‘Paradise.’ I listened to them from the perspective of a listener and realized how comforting they were.” Jin said, “In the song ‘Fire,’ there’s a line that says, ‘Stop trying so hard, it’s okay to lose.’ Listening to that, I thought it would be okay to let go of the pressure and live while going with the flow. I changed a lot while listening to the song.”

BTS also shared their love for their global fanbase, ARMY. “It’s in our vlogs, but ARMY are the ones who have known us since we were at the very bottom,” RM said. V talked about his famous phrase, “I Purple You,” and said, “At the time, ARMY had covered their ARMY Bombs [light sticks] with purple cloth so that the light shone purple. I thought that if a rainbow signified youth, the last color is purple, so ‘purple’ stood for loving and cherishing each other until the end. That’s why I said that, but I didn’t know it would become this big.”

V also described ARMY as “their one and only friends” and “people who love and cherish even their worst sides.” Jin said, “ARMY lit the path in front of us and helped us take those steps. They’re our light.” J-Hope said, “They’re our Achilles heel. They’re the one source of strength that supports us so that we can walk. They’re an important source of strength, the driving force that makes us move.” RM built off the idea of the “Achilles’ heel” and added, “That’s right. They’re our biggest weakness. Without ARMY, we would not exist.” 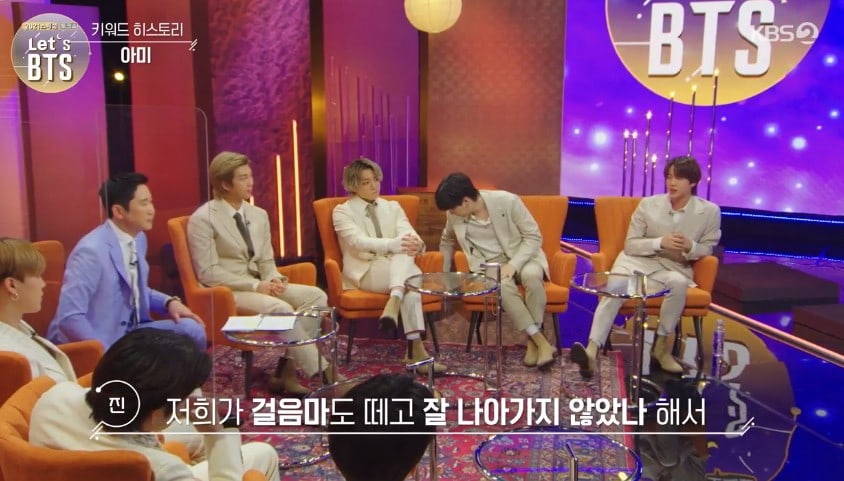 About their next goals, RM said, “Winning a Grammy Award is a physical goal, but ironically our goal now is to perform again in a stadium. To perform live is our goal.” The members shared that the group particularly wanted to perform their “Map of the Soul: 7” title track “ON” in person, since it had been released at the start of the COVID-19 pandemic.

During their performance of “Life Goes On,” the BTS members were joined by a surprise appearance of ARMY singing the chorus together via video connection.

BTS
Let's BTS
How does this article make you feel?