The previously released highlight reel revealed the unexpected death of the former chief prosecutor and the law school’s adjunct professor Seo Byung Joo (Ahn Nae Sang). As the police begin to suspect murder, the law school’s students and professors instantly become targets for suspects. The criminal law professor Yang Jong Hoon (Kim Myung Min), who had to quit his job as a prosecutor because of Seo Byung Joo, becomes one of the most likely suspects. The newly released stills give a sneak peek at professors Seo Byung Joo and Yang Jong Hoon, who are at the center of this unprecedented case, and the law school students who will begin to unearth the truth behind the rumors.

Seo Byung Joo and Yang Jong Hoon reunite at the law school with a hidden backstory that has put them on bad terms. Seo Byung Joo hands over a cup of coffee as he approaches Yang Jong Hoon, but Yang Jong Hoon exudes a cold aura as he glares back warily. Viewers are curious to find out what conversation they’re sharing in front of the Lady Justice statue. 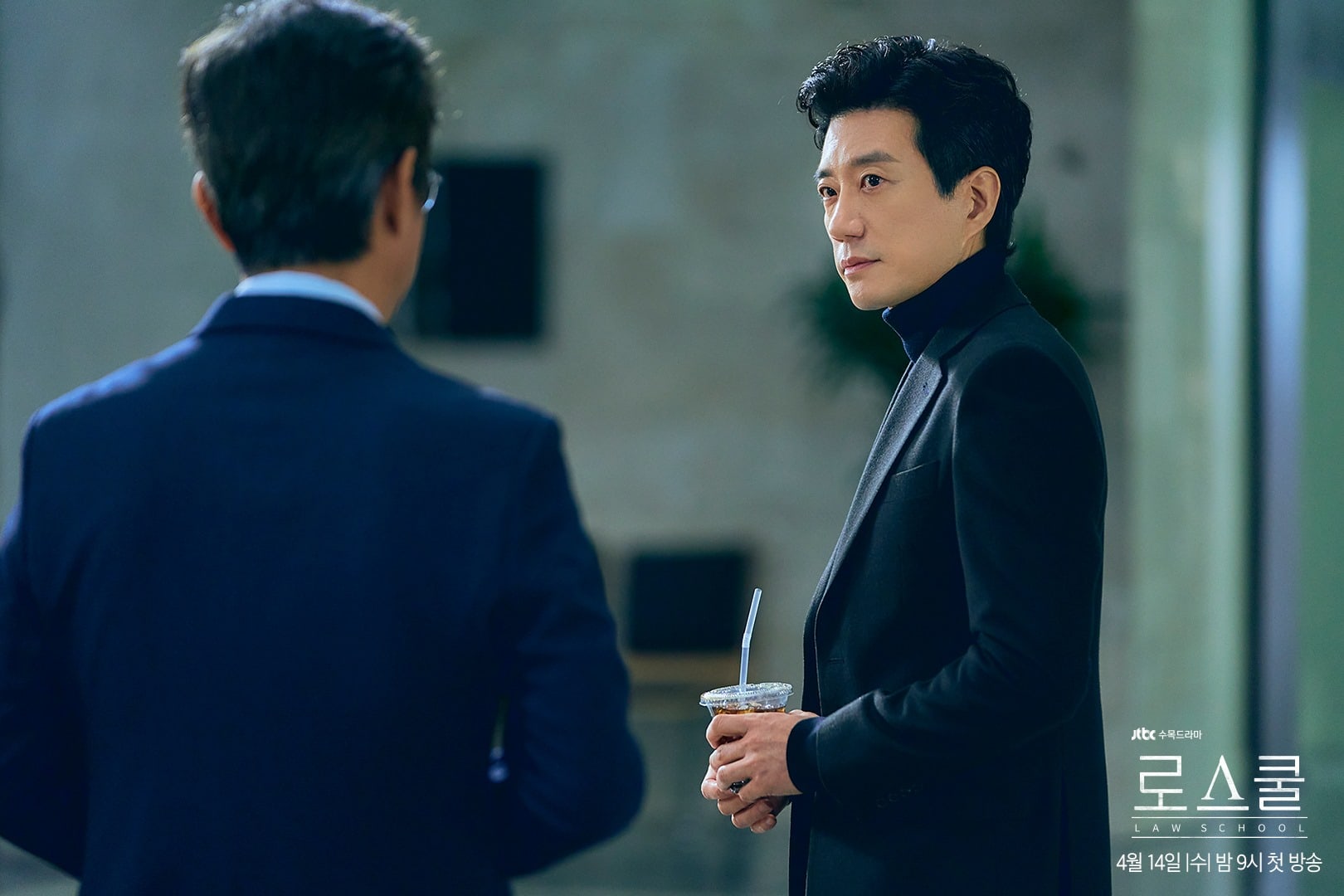 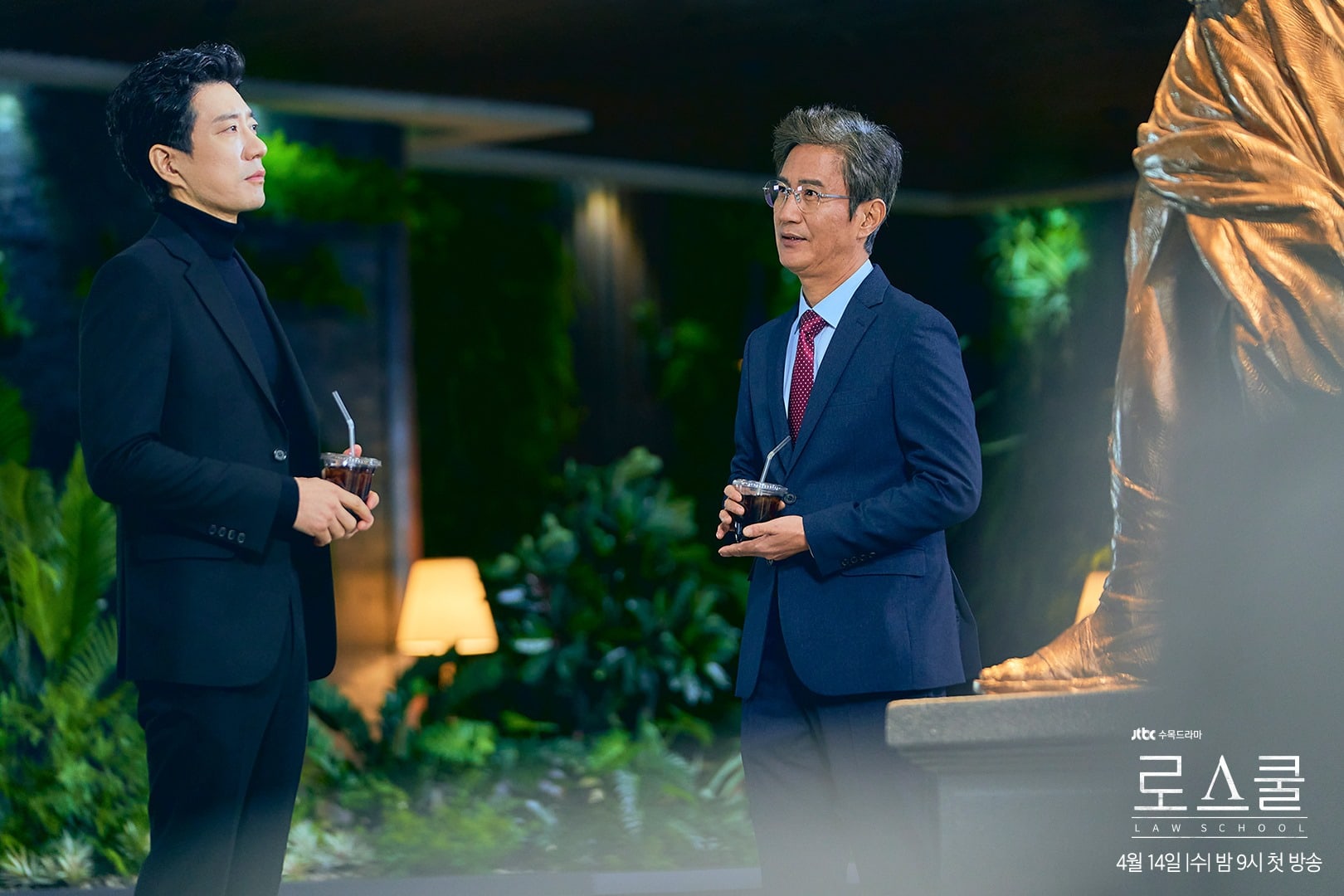 The students are unable to conceal their shock at the rumor that Yang Jong Hoon is a likely suspect for Seo Byung Joo’s murder. They keep their eyes wide open as they look over his past suspicious behavior, and the students plan on tracking the case while applying what they learned from Yang Jong Hoon’s grueling lectures. The newly released stills create a mysterious atmosphere as all the people connected to the case gather together. 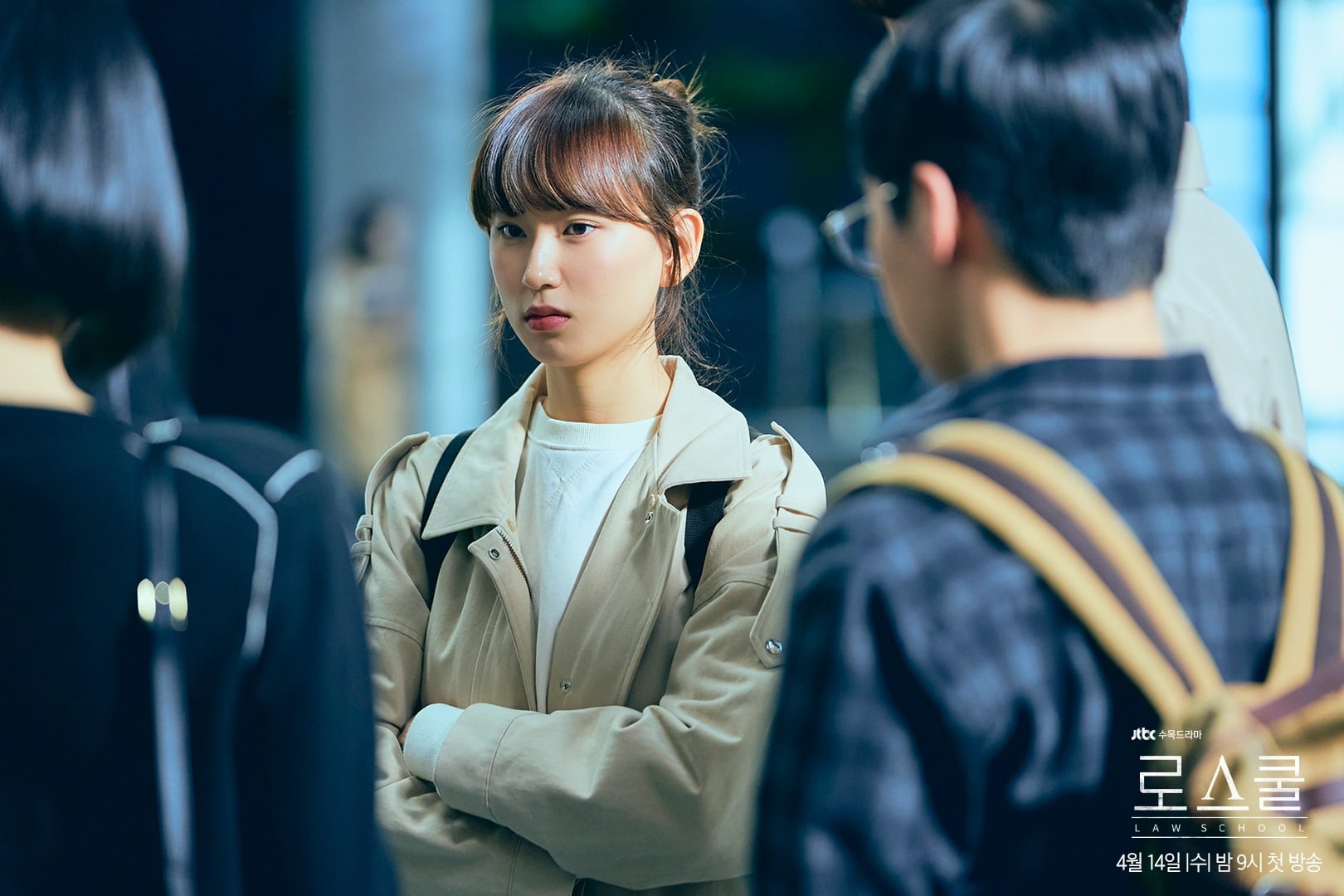 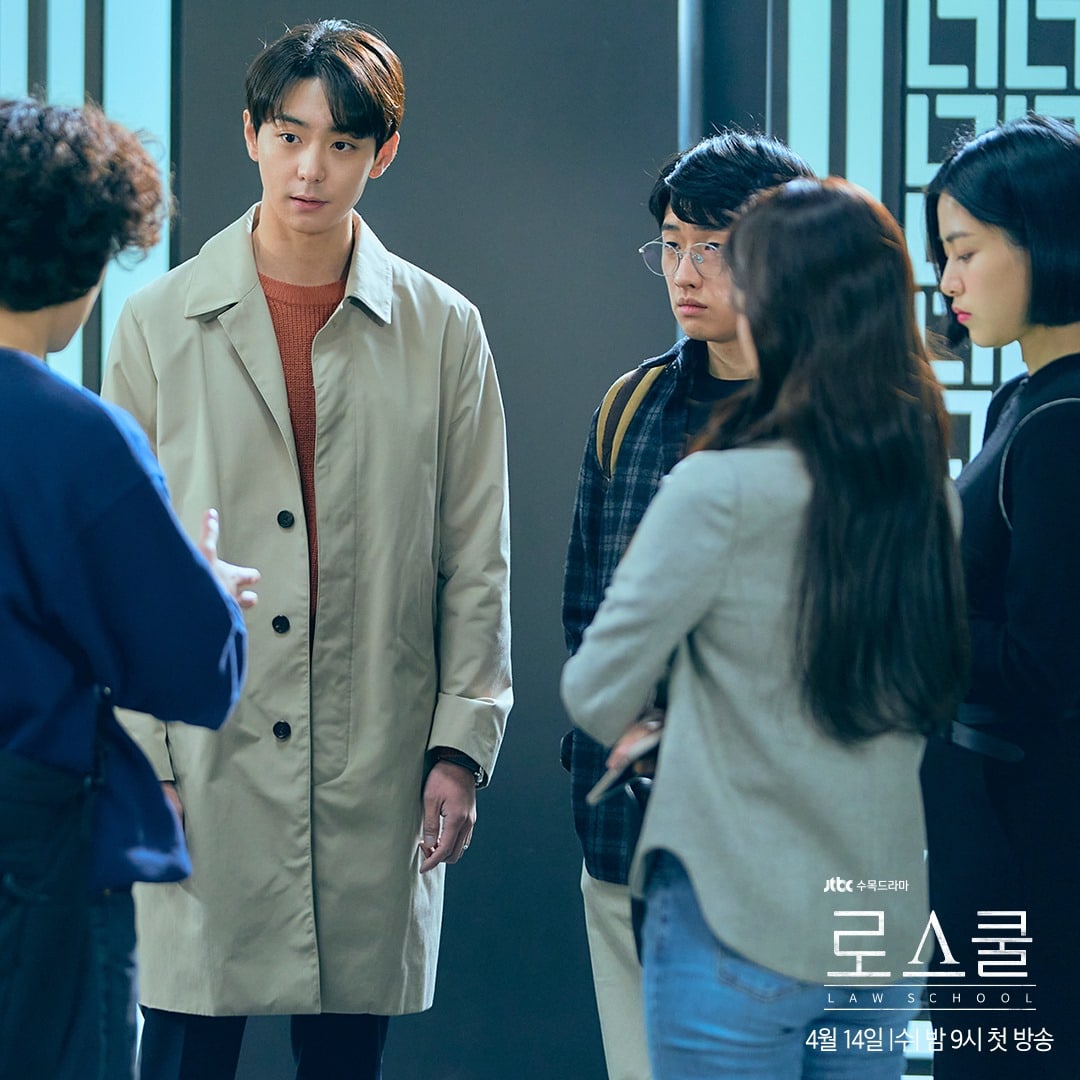 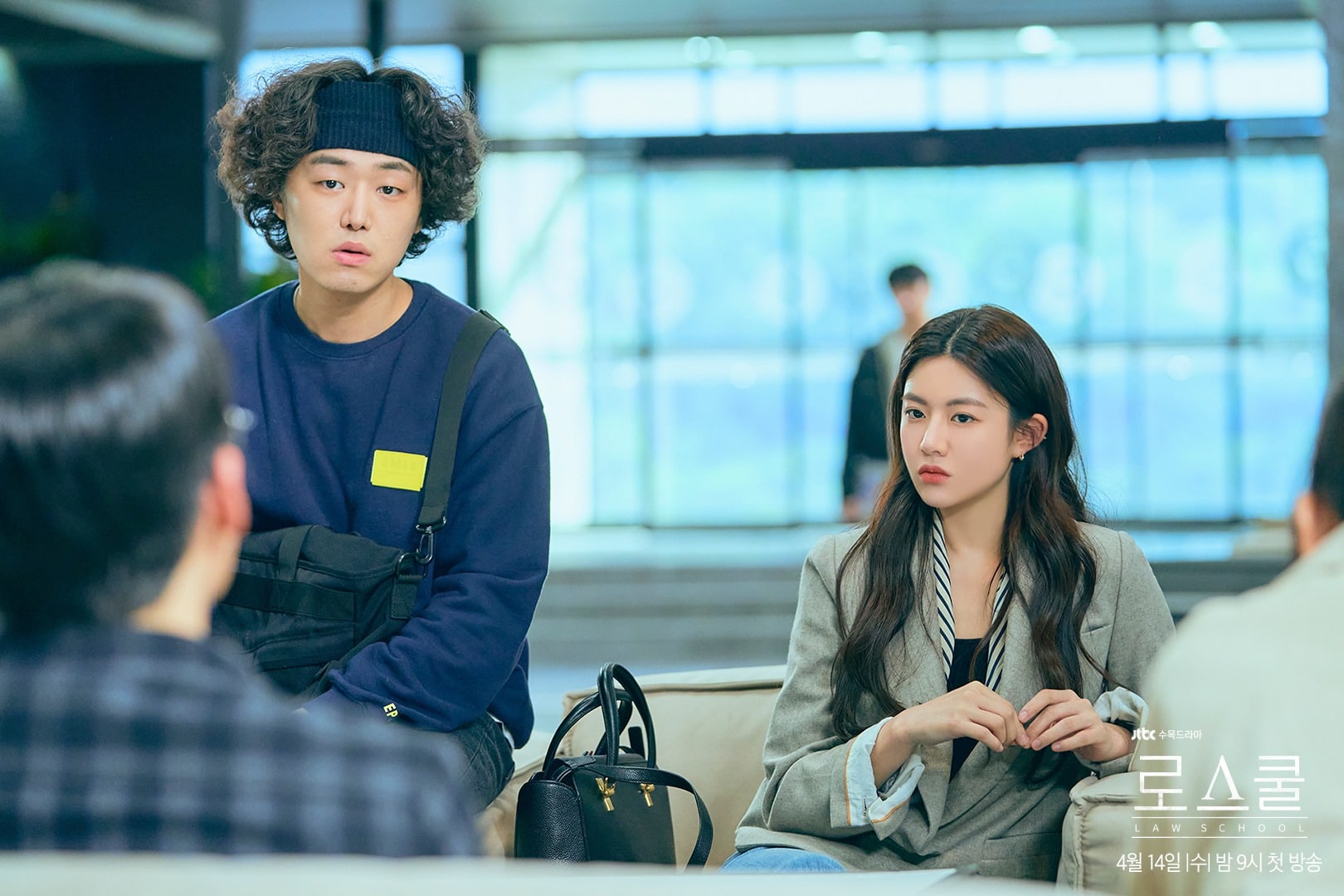 The production team shared, “The place of education that teaches law and justice instantly becomes the scene of a murder case. Thus, Hankuk University’s law school campus will become a location of judgement in which the truth will be sorted out. Please anticipate the intense psychological warfare that unfolds with the professors, who are former legal professionals, standing in front of Lady Justice and the future legal professionals, who are law school students, as they apply the law.”

“Law School” premieres on April 14 at 9 p.m. KST. In the meantime, watch a teaser for the drama here!

Watch Ahn Nae Sang in his current drama “Mouse” below: