3 Types Of Chemistry That Make “Vincenzo” Worth Watching

tvN’s prominent Saturday-Sunday drama “Vincenzo” has topped the ratings and made its mark as one of the hottest dramas of the first half of 2021!

According to data released by the Good Data Corporation, “Vincenzo” ranked number one in buzzworthy dramas and cast members for the second week of April. Ratings reached as high as 12.8 percent, making “Vincenzo” the most popular drama in its time slot among ages 10 to 50 years old.

Vincenzo and Hong Cha Young launched an onslaught on the villains featured in the “guillotine file,” exposing various cases of corruption among high-ranking officials in Korea. In response, the villains launched a counterattack by identifying Vincenzo’s weakness, and Vincenzo’s birth mother (Yoon Book In) lost her life. An even colder Vincenzo emerged and teamed up with Hong Cha Young, the tenants of Geumga Plaza, and other unexpected figures to make for an exciting turn in the story.

The following are three dynamics to be on the lookout for in upcoming episodes!

The most refreshing duo, Vincenzo and Hong Cha Young

When Vincenzo and Hong Cha Young first met, no one expected that they would become the best partners. But as it became apparent soon enough, the teamwork of a villain and a hot-blooded lawyer produces amazing synergy. The two took care of business with exceptional ideas and the efficiency of putting those ideas to work right away. It’s hard to believe that they both used to prefer working alone! Their pursuit of subjects are always heated, passionate, and intense. They know how to handle their enemies by throwing the bait and luring them in at the perfect timing. In one moment the duo makes the audience laugh with their comedic costumes, and in the next they put the viewers on edge by getting serious about taking care of business. At the end of the day, they are two dark heroes that define themselves as villains. And with the unexpected sparks of romance, they have got the viewers hooked. Plus, they just gained access to the guillotine file, which is the gateway to all hell breaking loose. It is expected that their teamwork will shine even more as they get deeper into their operation of bringing down the villain’s cartel. 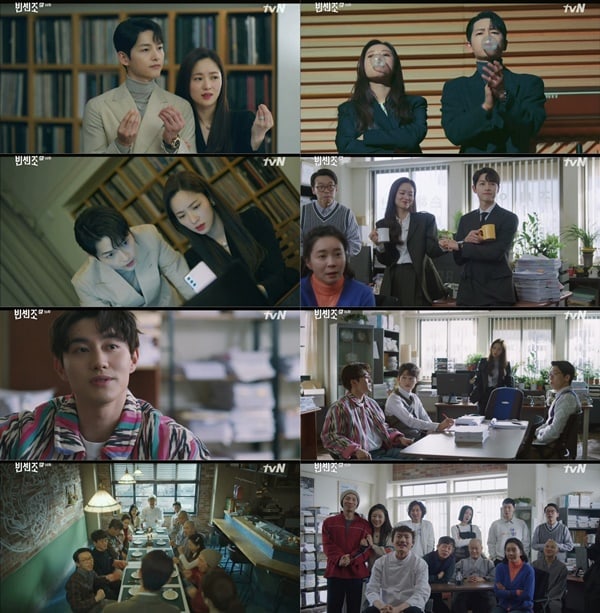 Together, Vincenzo, Hong Cha Young, and the Geumga Plaza tenants make one crazy team that shows off an interesting method of teamwork. The tenants are no longer willing to look the other way for all the atrocities committed by the Babel Group. And surprisingly enough, each of the tenants have started to reveal their unique secrets hidden up their sleeves. Nam Joo Sung (Yoon Byung Hee) goes through his own dramatic transformation while supporting the dark heroes, Lee Chul Wook (Yang Kyung Won) is always there when you need physical strength, Ahn Ki Seok (Im Chul Soo) has become one of the most dependable supporters, and Tak Hong Sik (Choi Duk Moon) and Park Suk Do (Kim Young Woong) are surprisingly tough. With Kwak Hee Soo (Lee Hang Na), Jeok Ha Su (Lee Woo Jin), To To (Kim Hyung Muk), Larry Kang (Kim Seol Jin), monk Chae Shin (Kwon Seung Woo), Jang Young Jin (Seo Ye Hwa), Seo Mi Ri (Kim Yoon Hye), Jeon Soo Nam (Lee Dal), and Miss Yang (Jung Ji Yoon) added to the mix, the tenants are an undeniable force. Their unique bond and dynamic adds a refreshing touch to “Vincenzo”

An unexpected alliance came up from the grounds in the previous episode when Jang Han Seo realigned forces with Vincenzo. Expressing his desire to move beyond the shadows of his psychopath older brother Jang Joon Woo (2PM’s Taecyeon), he reached out to join hands with the dark heroes. Jang Han Seo wants nothing more than to run the Babel Group properly, without hurting people. And to accomplish this, he knows that his only possible option is to have Vincenzo and Hong Cha Young on his team. He slowly gains Vincenzo’s favor by applying for a position at the Jipuragi law firm (which he was dropped from after the first interview) and saving the Geumga Plaza’s tenants despite Jang Joon Woo’s orders to do the opposite. When he returned to Jipuragi a second time, he was not the same. He was dressed from head to toe in 1980s fashion from Los Angeles’s Koreatown and his tie was a little loose than before. Luckily, his sincerity got through to Vincenzo. Now that they have joined forces, what’s in store for them next?