Korea’s latest occult drama “Sell Your Haunted House” is surprisingly lighthearted despite its spooky theme. It’s not too scary and has a little bit of every genre, but the comedy is what makes the drama’s biggest charm so far.

“Sell Your Haunted House” tells the story of exorcist Hong Ji Ah (Jang Nara) who is the owner of “Daebak Real Estate,” a mysterious real estate agency that only opens at night. They solely take cases involving haunted houses and help the clients sell their property at market value after performing exorcism. When Hong Ji Ah runs into con artist Oh In Bum (CNBLUE’s Jung Yong Hwa), who doesn’t believe in ghosts and specializes in exorcism scams, the two end up joining hands after a string of events.

The outline of the drama promises a fresh story, and the premiere episodes were indeed a lot of fun! Let’s take a closer look at five things that we loved about them.

Warning: spoilers for the premiere episodes ahead.

“Sell Your Haunted House” is worth checking out for its visually pleasing scenes alone. The color palette and the well-made special effects bring the drama’s overall spooky atmosphere to perfection and make for an intriguing watch. It’s evident that experts are at work here: The scenes are being created with the help of the team that was in charge of “Hotel Del Luna,” “Memories of the Alhambra,” and “Train to Busan.”

Jang Nara as a badass exorcist 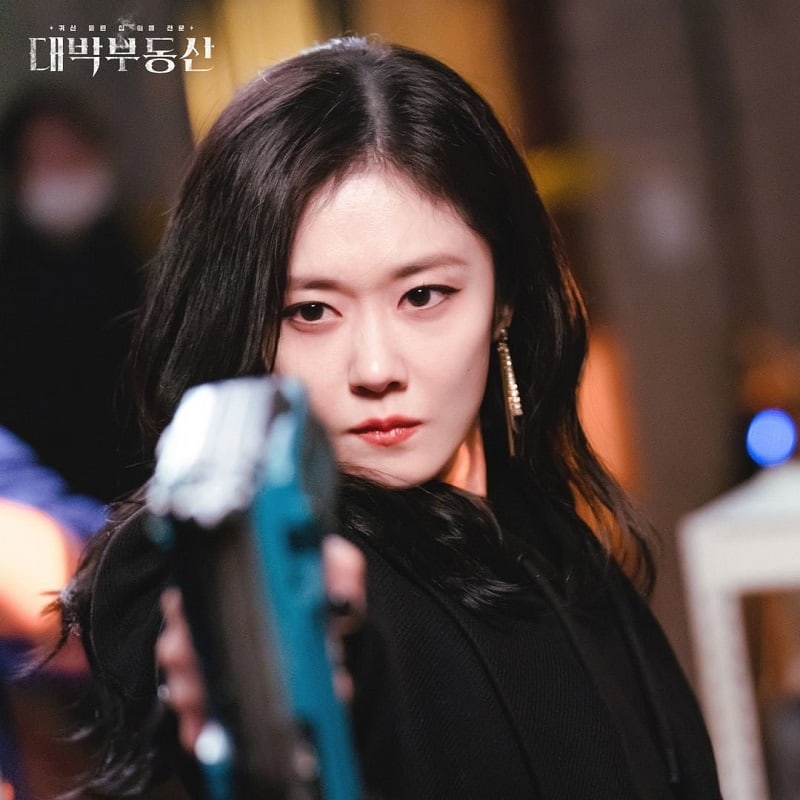 Known as a rom-com queen, Jang Nara completely lets go of her lovely image for this role as the tough and cold-faced Hong Ji Ah, and she pretty much nails it. Her subtle yet defined facial expressions, together with the all-black wardrobe and the dark makeup, successfully erase all traces of the sweet Jang Nara.

Hong Ji Ah is a real girl crush and looks pretty cool when she performs exorcisms equipped with a special gun and a hair stick among others. She even fights the vengeful spirits with her bare hands when they possess a psychic. Since there are quite a few action scenes, Jang Nara especially learned boxing and parkour in preparation for the drama and is also receiving help from the team that assisted the action stunts in “Arthdal Chronicles” and “Vagabond.”

The exorcism comes with a hilarious side effect though. After sending a ghost off, Hong Ji Ah adopts one of their habits (like smoking or drinking for example) for a while. And this isn’t the only fun part about Hong Ji Ah. Her eccentric character creates a lot of comic situations as she often reacts in unexpected ways, such as straightforwardly asking her clients if they killed someone in order to make sure that there’s really a ghost in their house and that they’re not just imagining things due to a bad conscience. 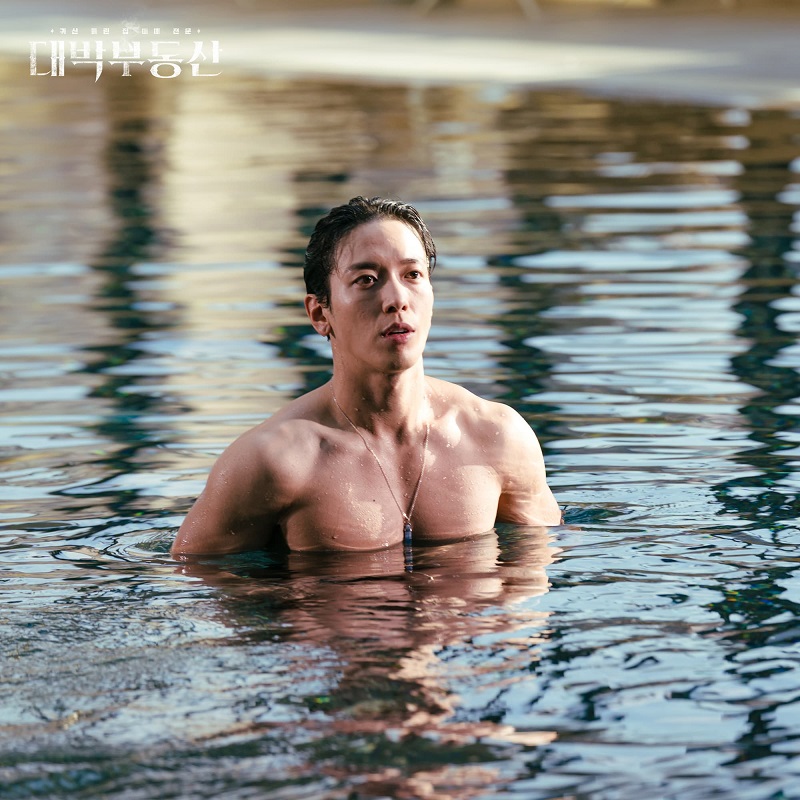 It’s already been four years since we last got to see CNBLUE’s Jung Yong Hwa in a drama, so it’s great to finally have him back. This time, he’s taken on his most challenging role yet and is doing a very good job at it so far. And as a bonus we even get an amazing OST from him! (The swimming pool scenes are another bonus…)

Oh In Bum is basically the polar opposite of Hong Ji Ah. He’s witty and sly, and lives by the motto “carpe diem” or enjoy today, which is why he scams people out of their money so that he can just enjoy his days spending money and flexing. As for now, Oh In Bum appears to be a comedic character, yet there seems to be more below his easygoing facade, and I can’t wait to discover what it is.

Jung Yong Hwa is actually playing multiple roles in this drama, which is what makes his role so challenging. It turns out that he’s a psychic, a human who’s easily possessed by ghosts, and thus we can expect to see him act as several different ghosts throughout the drama. I’m looking forward to see how he’ll pull it off. 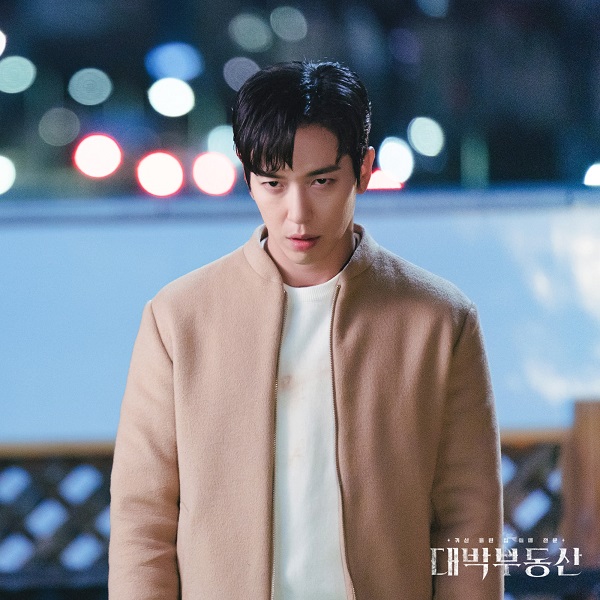 The fiery chemistry between the leads

Hong Ji Ah and Oh In Bum couldn’t be any more different, but this is exactly what makes their interactions so much fun. When Hong Ji Ah is in dire need of a strong psychic who can assist her and discovers that Oh In Bum might just be the one she’s looking for, she starts to take an interest in him. This makes for some hilarious misunderstandings since Oh In Bum is completely clueless about what’s going on.

It will be very interesting to see what will happen once the unlikely pair starts to work together. Will they be able to understand each other’s intentions and find a common ground? And will romance even bloom in the process?

There’s a ghost in Hong Ji Ah’s house! It turns out that it’s her mom who has been residing there as a vengeful spirit for 20 years after her death. Since Hong Ji Ah is unable to send her off on her own, she searches for a strong psychic to help her. Meanwhile, her mom amusingly messes with her every time she buys herself new clothes. But Hong Ji Ah’s mom doesn’t only exist for the purpose of comedy. There seems to be a big mystery surrounding her death that even indirectly involves Oh In Bum, and I’m curious to find out more about it. We’ll certainly have to prepare ourselves for a heartbreaking story. And will Hong Ji Ah and Oh In Bum succeed in sending her off after their first failed attempt? 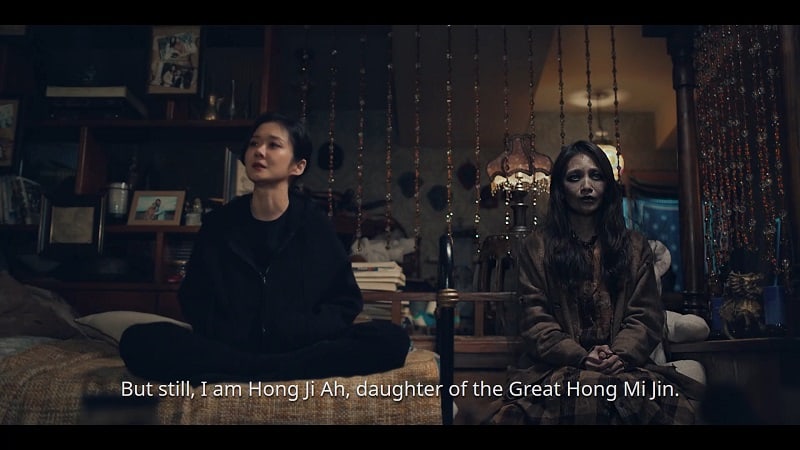 Enter the spooky world of “Sell Your Haunted House”:

Hey Soompiers! What did you like most about the premiere episodes of “Sell Your Haunted House”? Let us know in the comments below!

Currently watching: “Sell Your Haunted House,” “Taxi Driver,” “Mouse,” “You Are My Hero”
All-time favorite dramas: “Ode to Joy,” “Back in Time,” “From Survivor to Healer,” “Children of Nobody,” “My Mister,” “Hospital Playlist”
Looking forward to: “Youth of May,” “Move to Heaven,” “The Oath of Love“