Sunmi And Chungha Talk About Their Close Friendship, How They See Each Other On Stage, And More

During an interview with Marie Claire, Sunmi and Chungha talked about their close friendship. Both artists revealed that they preferred night time to day time. When asked what they do at night, Sunmi shared, “I space out. I eat while watching a movie or I sit in my massage chair.” She added that she is normally awake until 2 or 3 a.m. in the morning. Chungha revealed, “These days, I try to watch one movie before going to sleep while eating takeout. I enjoy that time, so I can’t fall asleep until dawn even if I have work the next day.” 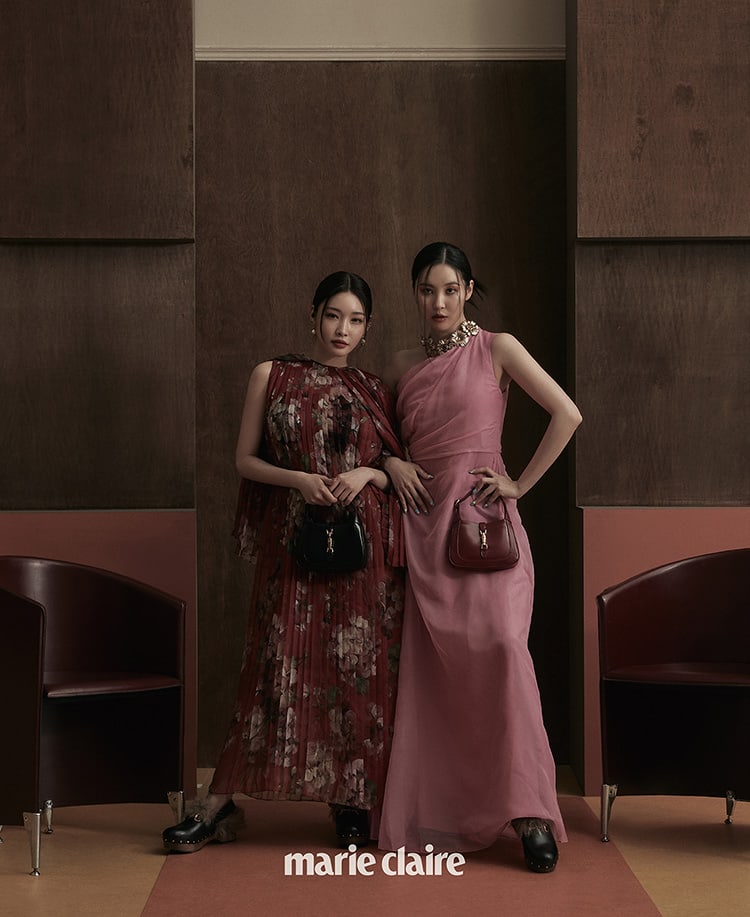 On working together for the photo shoot despite being solo artists, Sunmi shared that she feels more energized when working with someone she likes and is familiar with. Chungha added, “We contact each other frequently, but we don’t often have time to meet up because we’re both busy. That’s why I think times like this are precious. I get positive energy when I’m with Sunmi.” 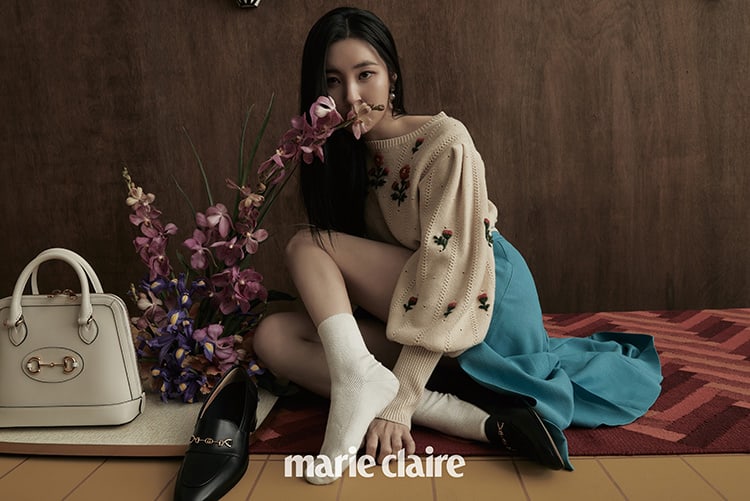 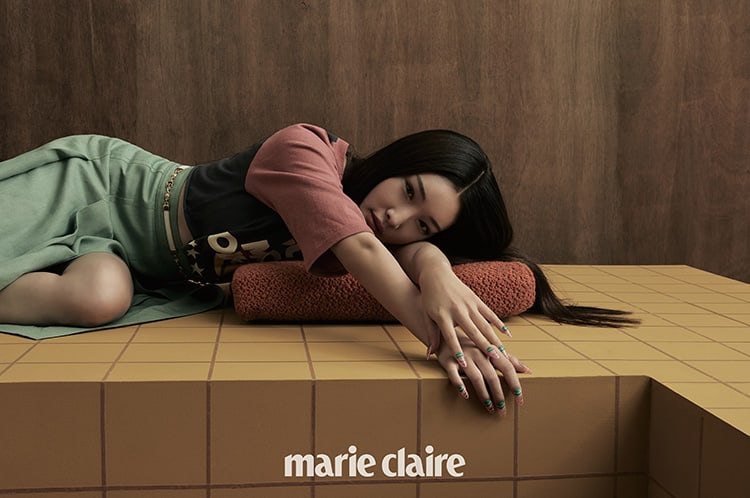 The two mentioned that they had gotten close after meeting for the first time on “Weekly Idol.” Chungha explained that she had acted cute towards Sunmi because she had to be energetic while filming for the variety show, but now the two are close enough to act more comfortably with each other. Sunmi shared, “I have two younger brothers, so I’ve always wanted a younger sister. That’s why I tend to treat Chungha like a younger sister.” Chungha revealed that Sunmi always kisses the air around her whenever they meet. Sunmi added, “I also kept calling her ‘Princess’ earlier. She’s my princess.” 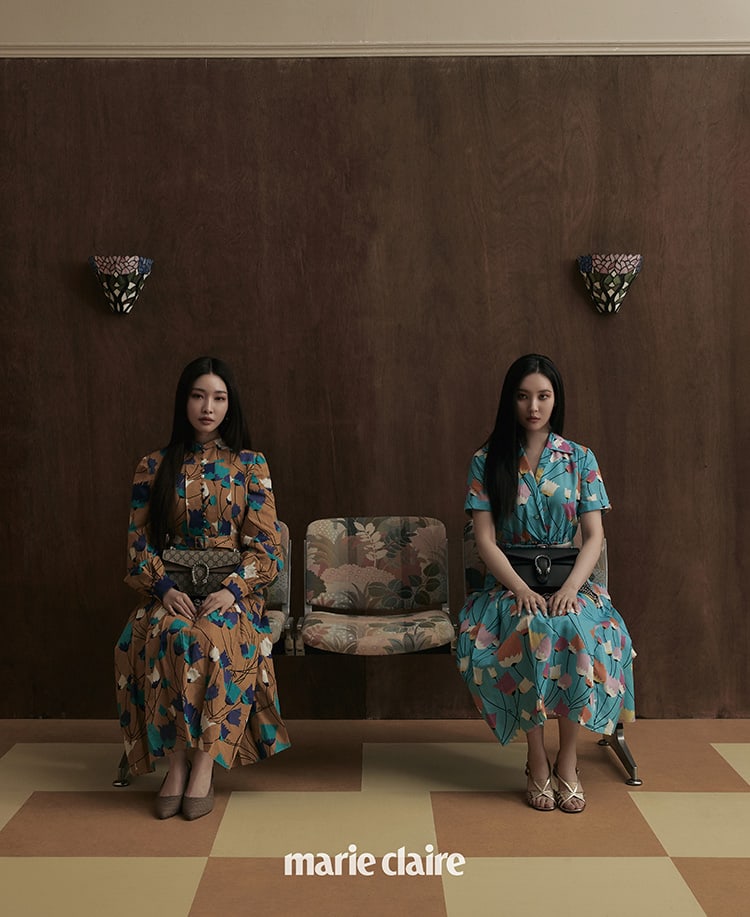 The interviewer also brought up the fact that Chungha and Sunmi had both similarly said that they wanted to be recognized for who they are rather than having role models in previous interviews. Chungha shared that she still felt she was less free on the stage compared to Sunmi. Sunmi commented, “Really? I think you look really free on the stage. You seem so cheerful and free.”

Sunmi explained, “You don’t have to be nice on stage. You can throw away the thought that you have to be friendly to everyone, so what you can portray emotionally widens. I get the feeling of being free in that aspect.” Chungha compared choreographed dancing to wearing a suit of armor. She shared, “It’s reliable but heavy, so I wonder if I could still fight well without it. One day, I want to become free to the extent that I can sufficiently express emotions with just my vocals.” 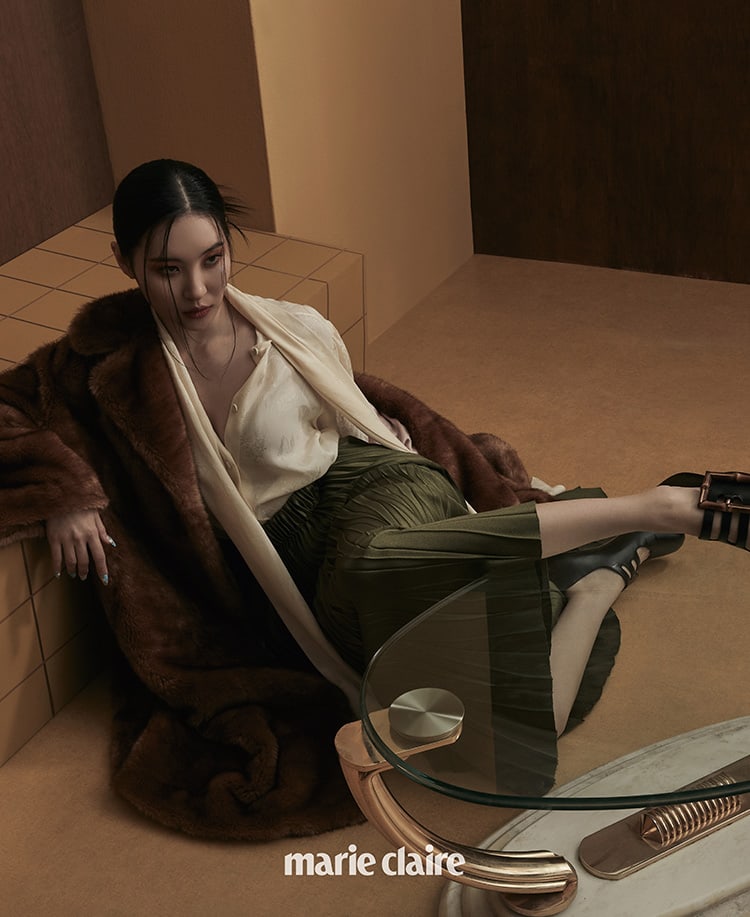 Sunmi commented that the rivalry among female solo artists has decreased compared to the past. She shared, “It was really severe in the past. Whether it was a team or a solo artist, if they came out at a similar time, article titles always had the words, ‘Get out of the way.'” Sunmi explained that a lot had changed these days and artists try to showcase concept that’s best for them rather than following trends. Chungha added, “I’m my own rival.” She joked, “There’s a friend who’s more famous than me. She’s called ‘Gotta Go.’ I’m very thankful for that friend, but she’s also become my enemy.” Sunmi shared, “I know that feeling. I also have a friend called ’24 Hours.’ There are songs that come before my name.” 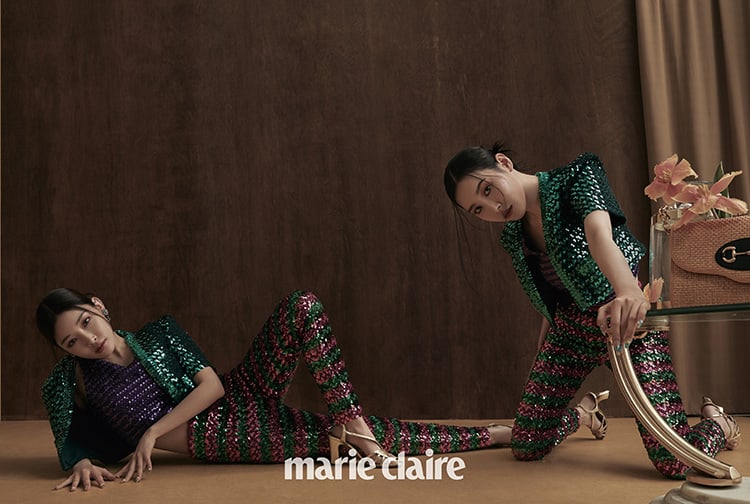 Chungha revealed that Sunmi had sent her a picture of her bruised knee while preparing for her latest comeback “TAIL.” She explained, “After seeing that, I wondered what choreography hurt her this much. Later, watching the performance, she started out crawling. I first thought, ‘I see. It must have hurt so much. That’s why she got bruises.’ After that, I see how awesome she is. When I watch her performance, I always think of three things, ‘shocking, awesome, and painful.'” Sunmi added that she was also jealous of Chungha’s ability to have fun on stage and to be full of swag in every dance movement. 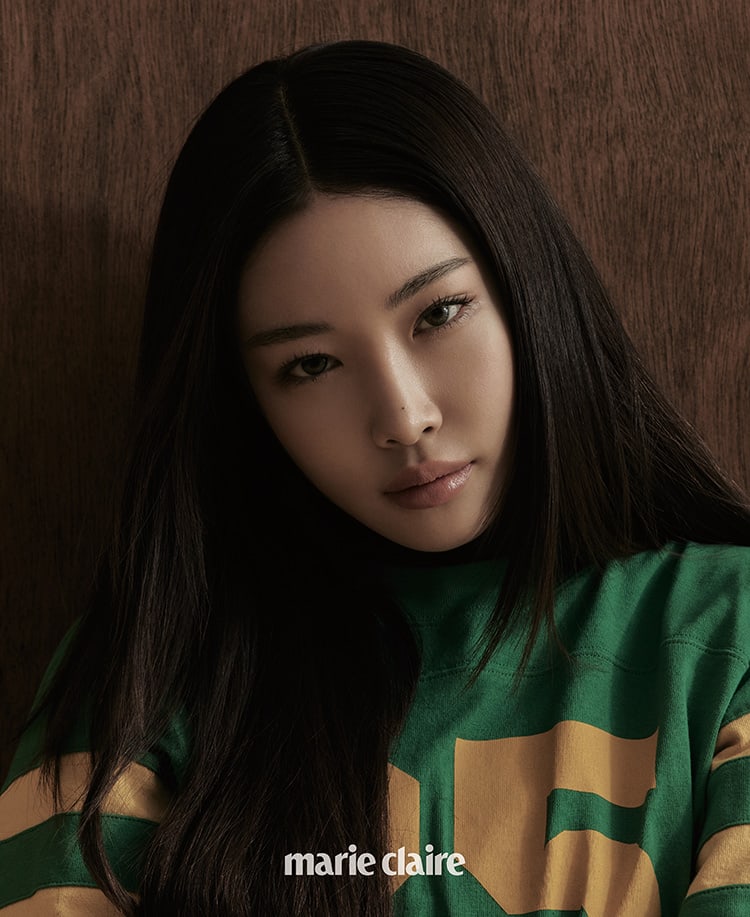 For their musical careers in the future, Sunmi shared that she wanted to continue telling powerful stories because that’s when she gains confidence. Chungha commented, “It’s because you’re a fighter on the stage, a good fighter.” Sunmi replied that although she took a cynical perspective in her songs, she still wants to experience happy love rather than painful love in real life even though the latter is more fun to portray. Chungha revealed she has yet to experience painful love, and Sunmi replied, “Really? I’ve been hurt a lot. Haha.” 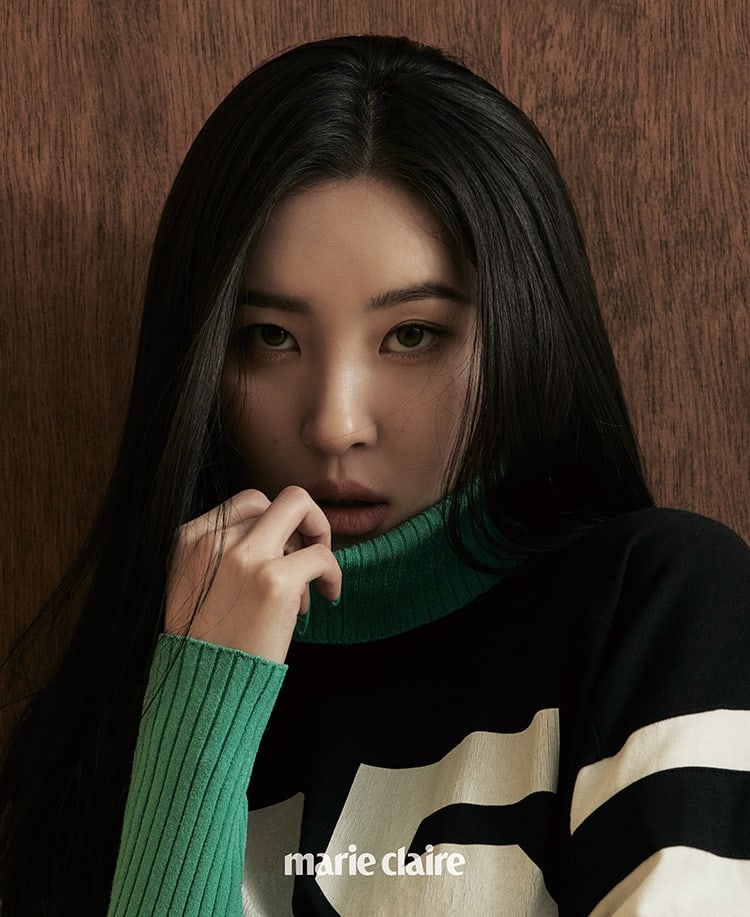 Finally, the two artists shared their plans to order takeout food when they get home. Sunmi added that she would watch “Harry Potter,” and Chungha shared, “I probably won’t sleep until the morning. My day has just begun.” 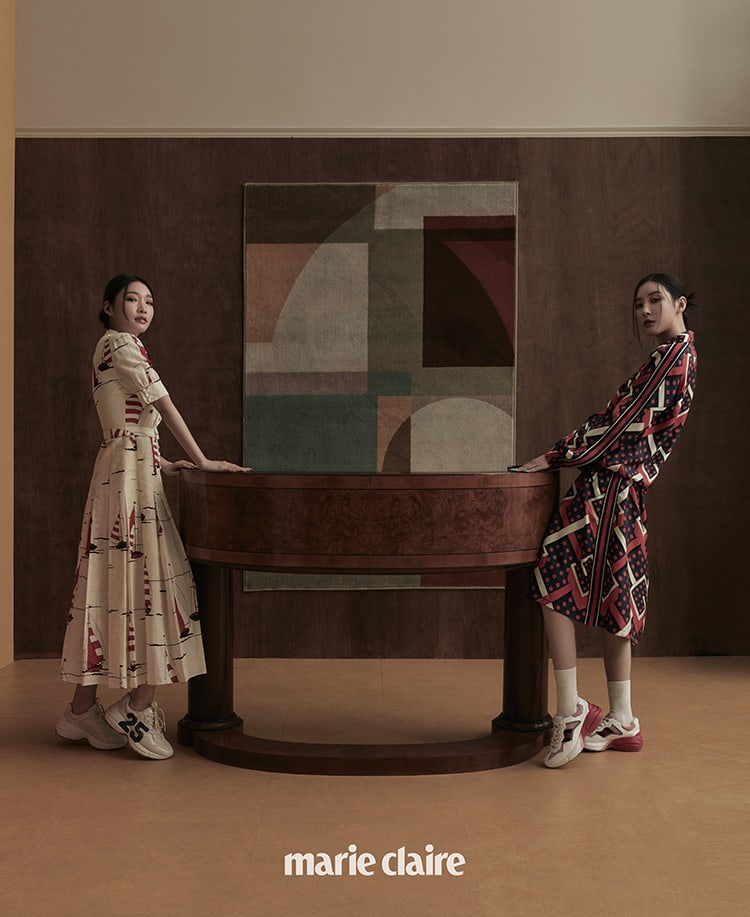 Chungha
Marie Claire
Sunmi
How does this article make you feel?