Many Korean actors have shared messages to celebrate and congratulate Youn Yuh Jung for winning Best Supporting Actress at the Academy Awards.

At the 93rd Academy Awards held on April 25 (local time) Youn Yuh Jung became the first Korean actress and second Asian actress to win an Oscar award. She took home the trophy for Best Supporting Actress for her performance as Soonja in the film “Minari.”

Jeon Do Yeon, who worked with Youn Yuh Jung in “The Housemaid” and “Beasts Clawing at Straws,” conveyed through her agency Management SOOP, “We all had no doubt that she would receive the award. Simply saying ‘congratulations’ is not nearly enough, but I wholeheartedly congratulate her and wish that she will bask in this great joy. Sunsaengnim (term used to refer to an elder with respect), you are amazing, and I am so proud. I hope that a road full of flowers await in your future.” Jeon Do Yeon was the first Korean actress to win Best Leading Actress at the Cannes Film Festival in 2007.

The actors who appeared on her variety show “Youn’s Stay” also sent in congratulatory messages. Jung Yu Mi shared through Management SOOP, “Congratulations on your Oscar win. I am even happier and more proud that you are the first Korean actress to receive an Oscar. I hope that you will continue to act in various works in good health. Congratulations.”

Park Seo Joon relayed via News1, “Congratulations on your win! Even when we were appearing on ‘Youn’s Stay’ together, you were someone to look up to. I’m sure that would have also been the case on the set of ‘Minari.’ I think that’s why grandma Soonja in the film felt more tender and lovely. I genuinely congratulate you on your Oscar, and I hope you will continue to stay healthy. Once again, congratulations.”

Choi Woo Shik shared, “I sincerely congratulate you for winning Best Supporting Actress at the Oscars. While watching the broadcast, we were all desperately wishing for it. I teared up while watching it. I hope you will always be healthy and actively appear in great projects. Congratulations on the award once more!”

Park Jung Min, who acted in “Keys to the Heart” alongside Youn Yuh Jung, stated through Sports Chosun, “I think it is a natural result. I sincerely congratulate Youn Yuh Jung on her Oscar award. I will also remember this moment today for a long time, and I hope Youn Yuh Jung also has a splendid day. As her junior, I couldn’t wish for anything more as long as she happily and healthily shows us more films.”

Bae Doona shared on her Instagram Stories a screenshot of an article about Youn Yuh Jung’s Oscar win. She wrote, “Wow! The Oscar Winner! Sunsaengnim! Congratulations!” 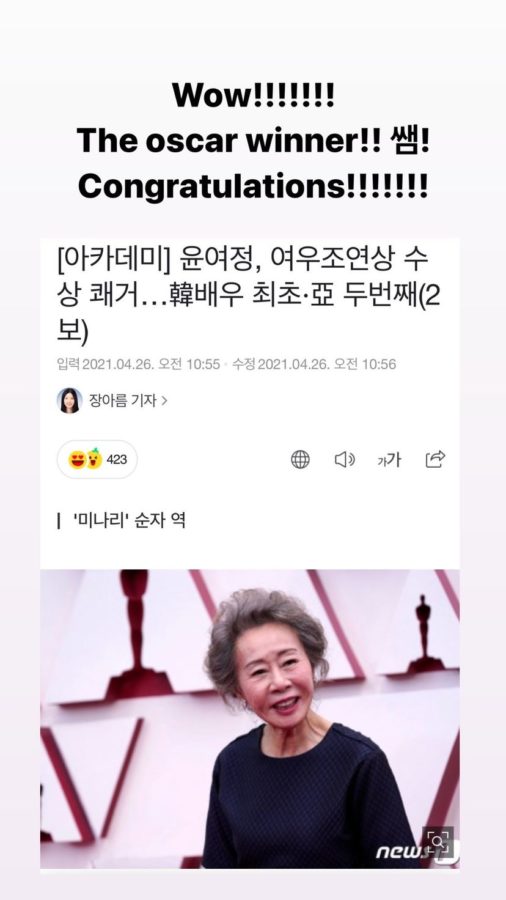 Kim Go Eun also posted a screenshot on her Instagram Stories and decorated it with stickers that say “Best news ever” and “Wow.” 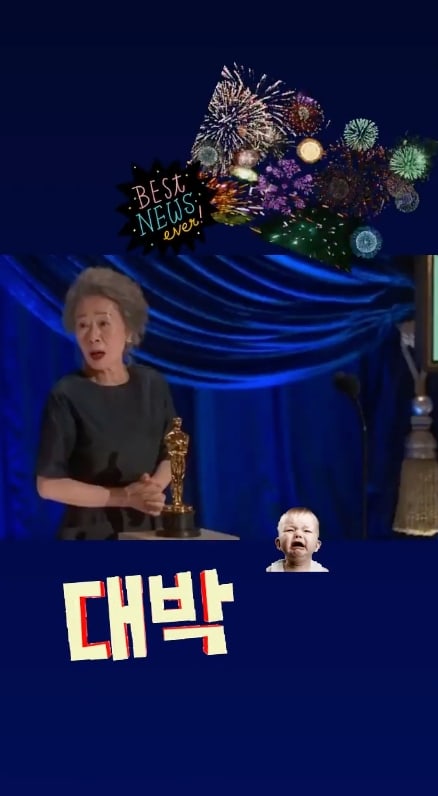 Han Ji Min did the same and wrote, “Sunsaengnim, congratulations.” 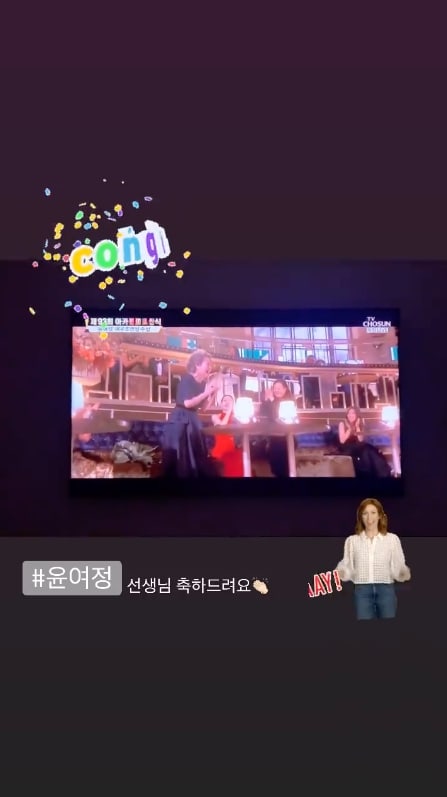 Han Hyo Joo posted a photo of the television broadcast of the awards ceremony and commented, “Wow! Congratulations!” 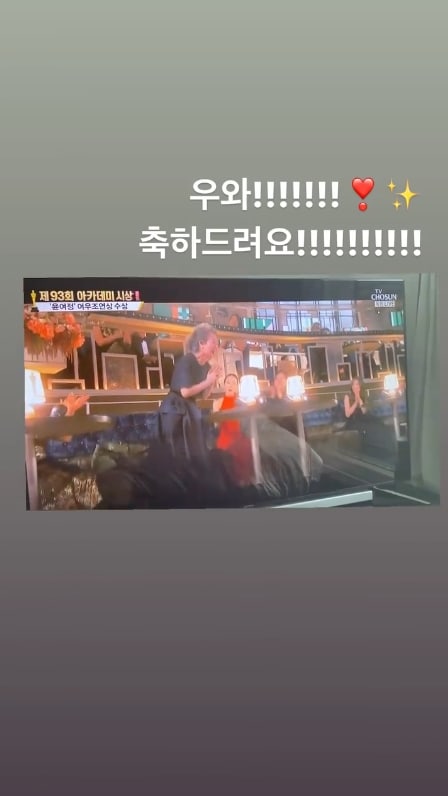 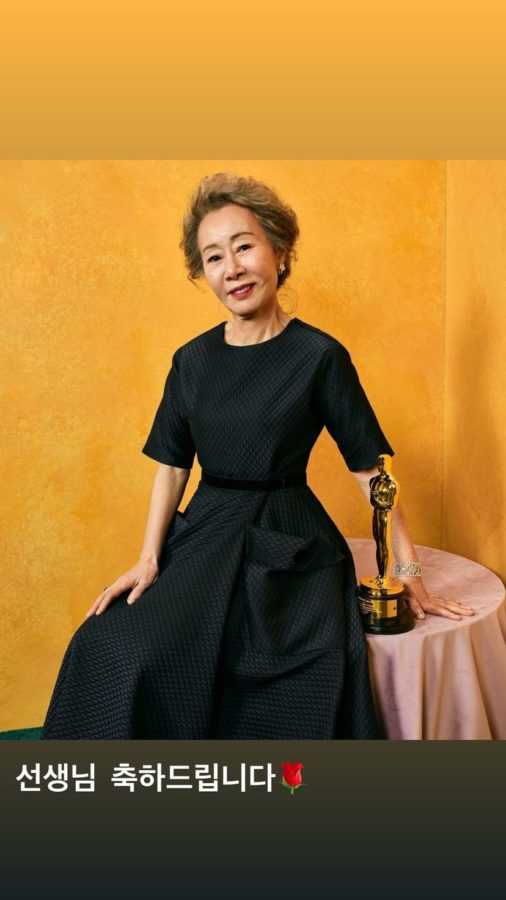 Lee Byung Hun posted on his Instagram, “Impossible, that is not a fact, but an opinion,” along with the hashtags “Youn Yuh Jung,” “Academy Best Supporting Actress,” “Bravo,” and “Academy Awards.”

With the citizens, I congratulate actress Youn Yuh Jung on winning Best Supporting Actress at the Academy Awards.

I show my respect to the life-long acting of Youn Yuh Jung, who won the sympathy of those from other cultures with her relentless passion.

It is a triumph of the movie industry after the movie “Parasite” was globally recognized for its artistic value and direction. It has made us more proud of our culture and art, and above all, comforted the citizens who are worn out by COVID-19.

A Korean actress winning the Best Supporting Actress award at the Academy Awards for the first time is especially meaningful in that it has rewritten history with ‘acting’ in the 102-year history of Korean films. It is even more meaningful that this is an achievement made together by second-generation Korean-American director Isaac Lee Chung, Steven Yeun, and our actors. I hope that the Koreans living abroad will also feel proud of this achievement.

The film “Minari” holds significant meaning for us. It has portrayed the story of an immigrant family in a way that reflects general human life. It has proven to us that regardless of where we live, we are all closely connected. The acting shown by Youn Yuh Jung, who vividly brought to life the image of our mothers and grandmothers, shined so brightly. Once again, I am very proud of your achievement. Congratulations.

Check out Youn Yuh Jung in “Beasts Clawing at Straws“!