Jang Nara and CNBLUE’s Jung Yong Hwa will be busy solving problems and exorcising ghosts in the upcoming episode of “Sell Your Haunted House”!

Previously in the drama, Hong Ji Ah and Oh In Bum teamed up to successfully exorcize the vengeful spirit tied with Britium. They then got into a dispute with Do Hak Construction’s Do Hak Sung (Ahn Kil Kang), who is the leader of the gangsters that had taken over the street in front of Daebak Real Estate. Hong Ji Ah’s eyes widened with shock when she discovered the vengeful ghost of Oh In Bum’s uncle next to Do Hak Sung.

Hong Ji Ah and Oh In Bum are now being investigated at the police station along with the gangsters. Hong Ji Ah sits dignified without a single scratch on her face, while Oh In Bum is seated next to her with bruises all over his face. When Oh In Bum complains of the injustice, the gangster Kim Tae Jin (Heo Dong Won) also complains of a false charge. Curiosity mounts over the conclusion of the investigation, which apparently will cause Hong Ji Ah to be at a loss for words. 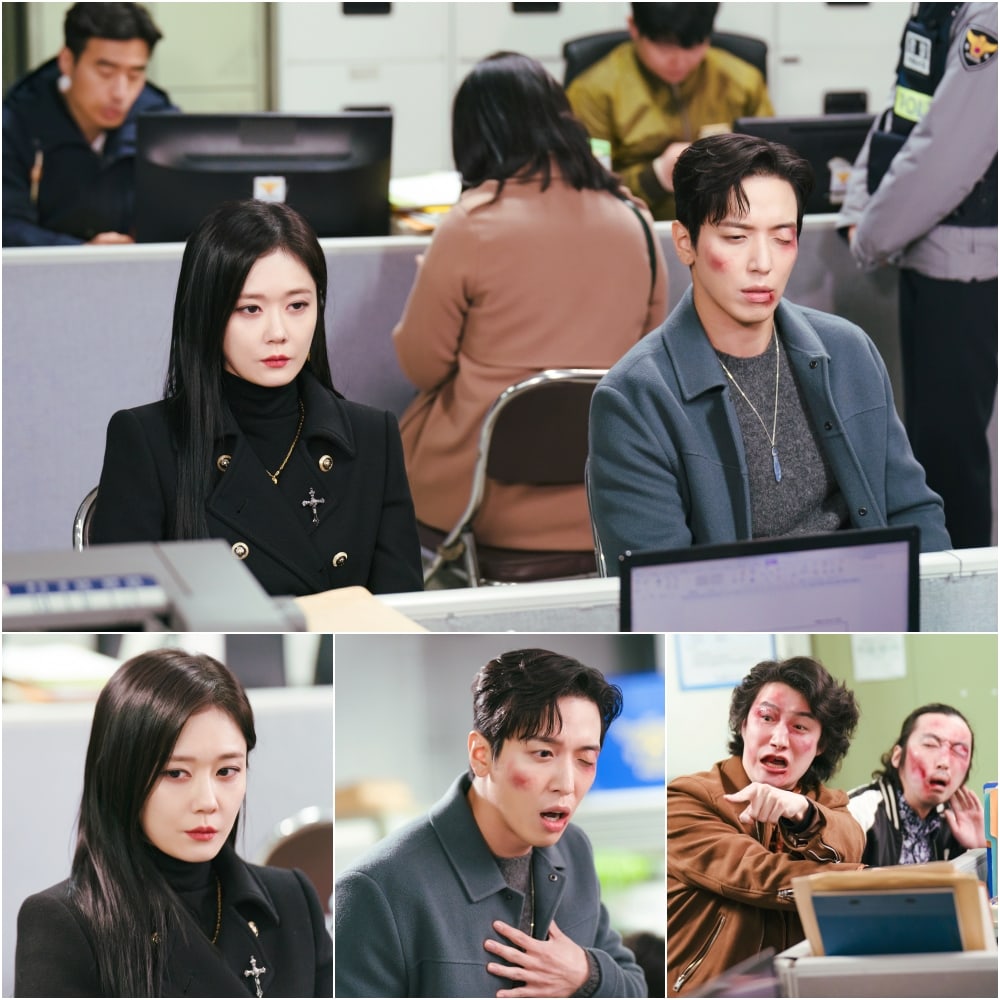 During the shoot for the chaotic scene in mid-January, Jang Nara showed admiration for the realistic makeup done on Jung Yong Hwa’s face, while Jung Yong Hwa and the supporting actors role-played as a boss and his employees for fun.

The drama’s producers commented, “Jang Nara and Jung Yong Hwa are actors who are able to show rich expressions that are different in every take.” They asked viewers to watch the upcoming episode to see how the scene will affect the future developments in the drama.

In another scene, Hong Ji Ah and Oh In Bum are directly faced with the attack of a powerful spirit.

The pair have come to Green Villa to exorcise a spirit. Looking determined, Hong Ji ah loads her gun with salt bullets, while Oh In Bum falls on the floor out of shock. As soon as the exorcism begins, the ghost shakes the ground violently and launches sharp blades at them. It remains to be seen if the two exorcists will successfully exorcise the spirit and what kind of secret the spirit could be hiding. 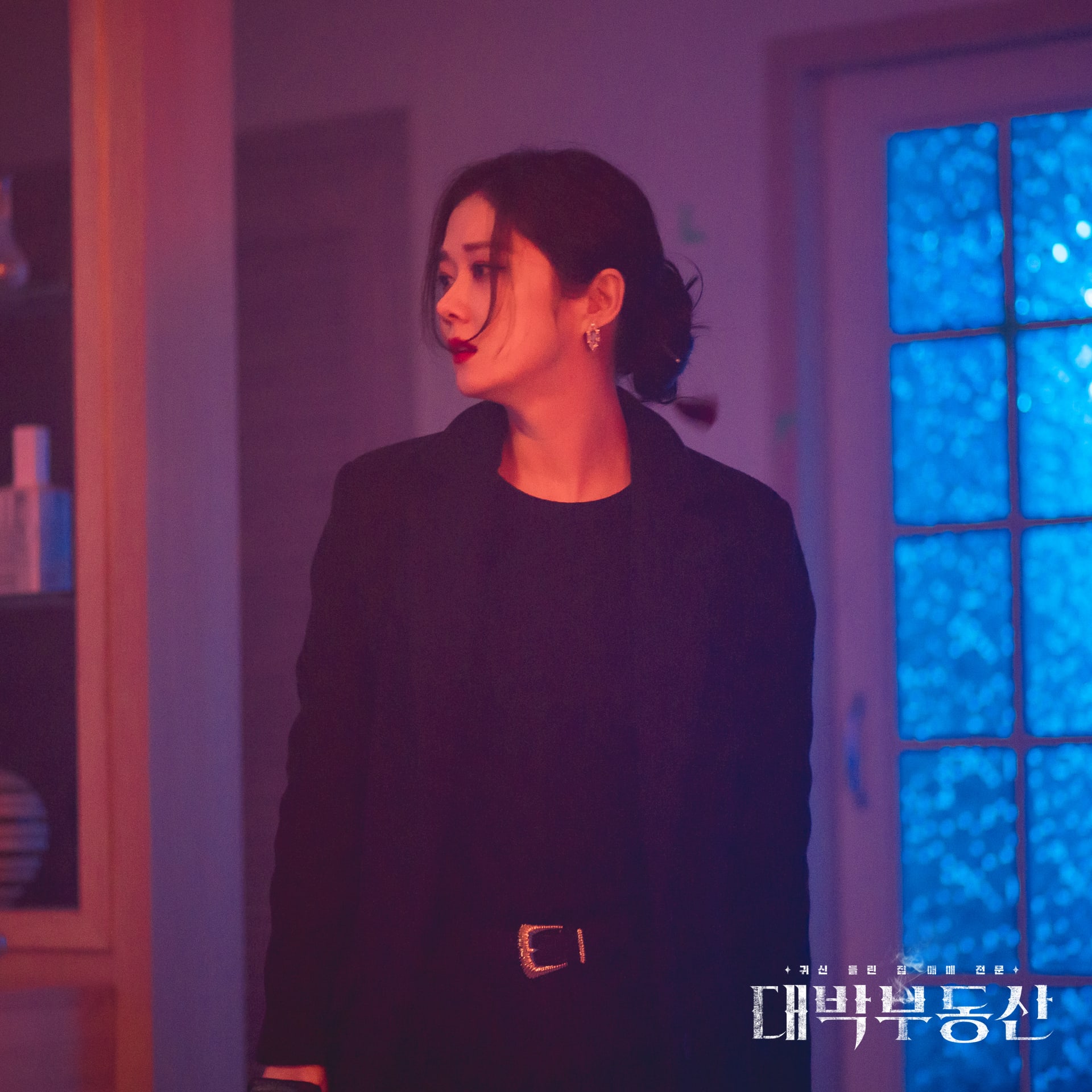 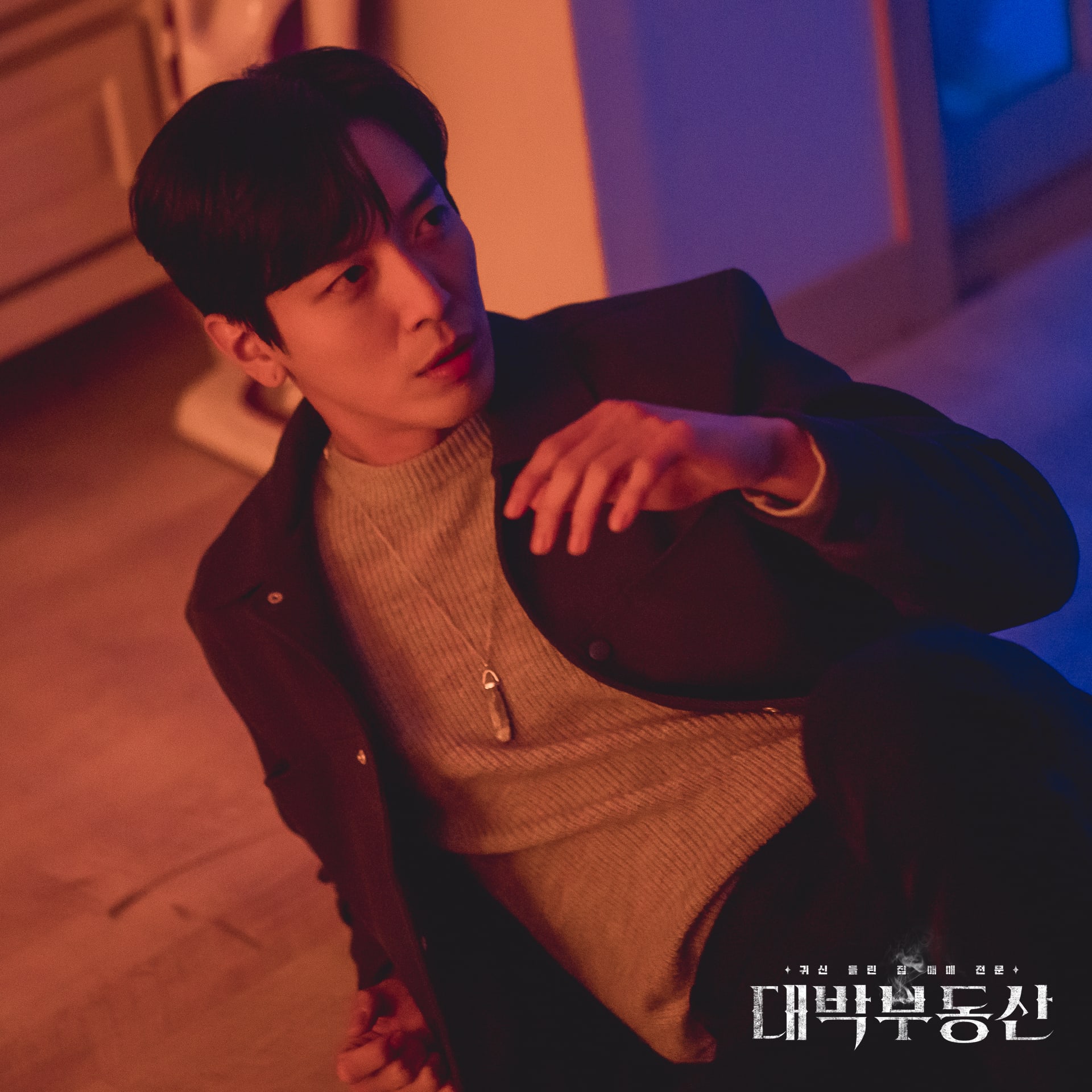 This particular scene was filmed in early March. When they stepped into the set, Jang Nara and and Jung Yong Hwa marveled at the creepy atmosphere of the set. When the staff made the set shake with loud banging sounds, Jung Yong Hwa remarked, “Wow, this is really scary. It’s practically an earthquake.” To make the scene more realistic and dramatic, the two actors repeatedly practiced screaming and falling over.

About the scene, the “Sell Your Haunted House” production team shared, “Jang Nara and Jung Yong Hwa are so immersed in their roles that they speak like their characters even when they’re taking a break. The next episode will unveil a story that broke the hearts of Jang Nara, Jung Yong Hwa, and the actor playing the role of the vengeful spirit. It will be a memorable scene that will have you absorbed in the character’s emotions.”