SBS’s “Taxi Driver” has shared a heartbreaking sneak peek of its upcoming episode!

Based on the popular webtoon of the same name, “Taxi Driver” tells the story of a mysterious taxi service that delivers vengeance on behalf of victims who are unable to get justice through the law. Lee Je Hoon stars as Kim Do Gi, a former special forces officer who works as a driver for the service, while Pyo Ye Jin plays Ahn Go Eun, a tough and talented hacker who works alongside him.

On the latest episode of the drama, Kim Do Gi learned the shocking truth behind U Data’s Strategic Planning Office, which had previously been shrouded in mystery. Although all of U Data’s employees aspired to transfer to the seemingly elite department, it turned out that the Strategic Planning Office was hiding a dark secret: it made its profits from uploading illegally filmed footage of ordinary people.

The episode ended with another shocking revelation—U Data had posted illegally filmed footage of Ahn Go Eun’s late sister before her death. Although Rainbow Taxi CEO Jang Sung Chul (played by Kim Eui Sung) attempted to prevent Ahn Go Eun from seeing the footage, he was too late, leaving viewers wondering what the fiery hacker would do next to avenge her sister.

In newly released stills from the drama’s next episode, “Taxi Driver” flashes back to Ahn Go Eun’s past as an innocent, cheerful high school student. Dressed in her school uniform, there is an untarnished naivete in her eyes that hints at her bright personality and reveals that she has not yet suffered any grave tragedy in her young life.

However, in the next photos, Ahn Go Eun collapses to the ground as she breaks down crying, with several police officers holding her back as she sobs in despair. Faced with a shocking situation amidst a swarm of people, Ahn Go Eun seems completely devastated, as if her entire world has just been turned upside down. 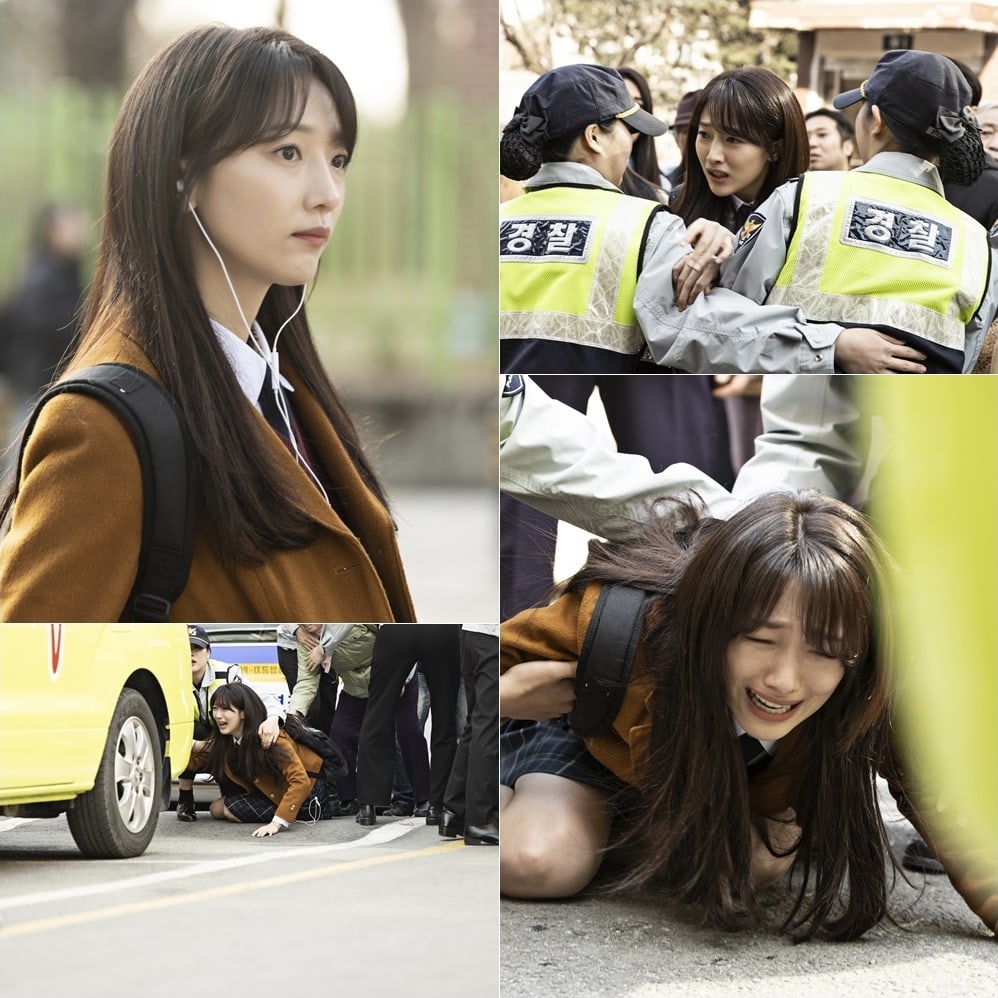 The producers of “Taxi Driver” remarked, “The backstory that Pyo Ye Jin has been carefully hiding in the drama will be revealed [this week].”

They also praised Pyo Ye Jin’s acting, revealing that the actress’s emotional performance had actually made the staff tear up during filming.

“Pyo Ye Jin, who had to display polar-opposite emotions, spent a lot of time discussing her character and the situation she faced with director Park Joon Woo before filming,” they shared. “As soon as she began filming, Pyo Ye Jin completely immersed herself in her character’s emotions, and she even expressed things that weren’t in the script. Her passionate acting made the staff on set tear up while watching her.”