We’ve already reached the half mark and “Taxi Driver” still shows no signs of slowing down! The new episodes kept us on the edge of our seats with plenty of action and suspense, and brought closure to Rainbow Taxi’s latest revenge job in a daring, yet gratifying way. Without further ado, here are five moments from the grittily intense episodes 7-8 that left us shocked.

We previously learned that Ahn Go Eun (Pyo Ye Jin)’s older sister Ahn Jung Eun (Ryu Yi Jae) died by suicide, which ultimately led to Go Eun joining Rainbow Taxi. After getting bits and pieces of Jung Eun’s tragic story in the previous episodes, we finally get to see the full picture, and it’s really heartbreaking. We can only phantom how much pain Jung Eun must have felt to make such a drastic decision and leave her beloved little sister behind.

It was equally heartbreaking to see Go Eun lose her sanity over the loss of her sister. Her mental health has already improved a lot in the years after the tragic incident, and I truly applaud her for her strong will. 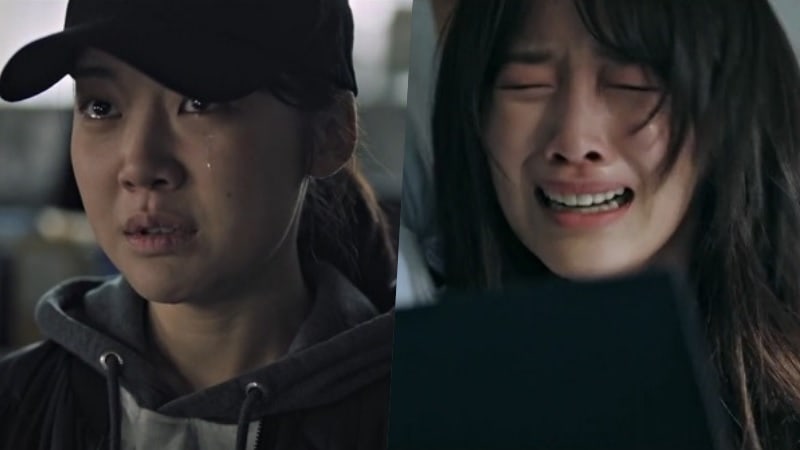 However, as Kim Do Gi (Lee Je Hoon) finds out during his undercover mission at U Data, the truth is even more shocking than what the Ahn sisters knew. The adult video that Jung Eun’s boyfriend claimed to have filmed just for fun didn’t get leaked accidentally, but he purposely approached her with the intent to film and spread said video. As it turns out, the boyfriend is in cahoots with U Data and is about to film a new video with his next victim. This time he is really brazen about it and even threathens the victim since he doesn’t fear the law. 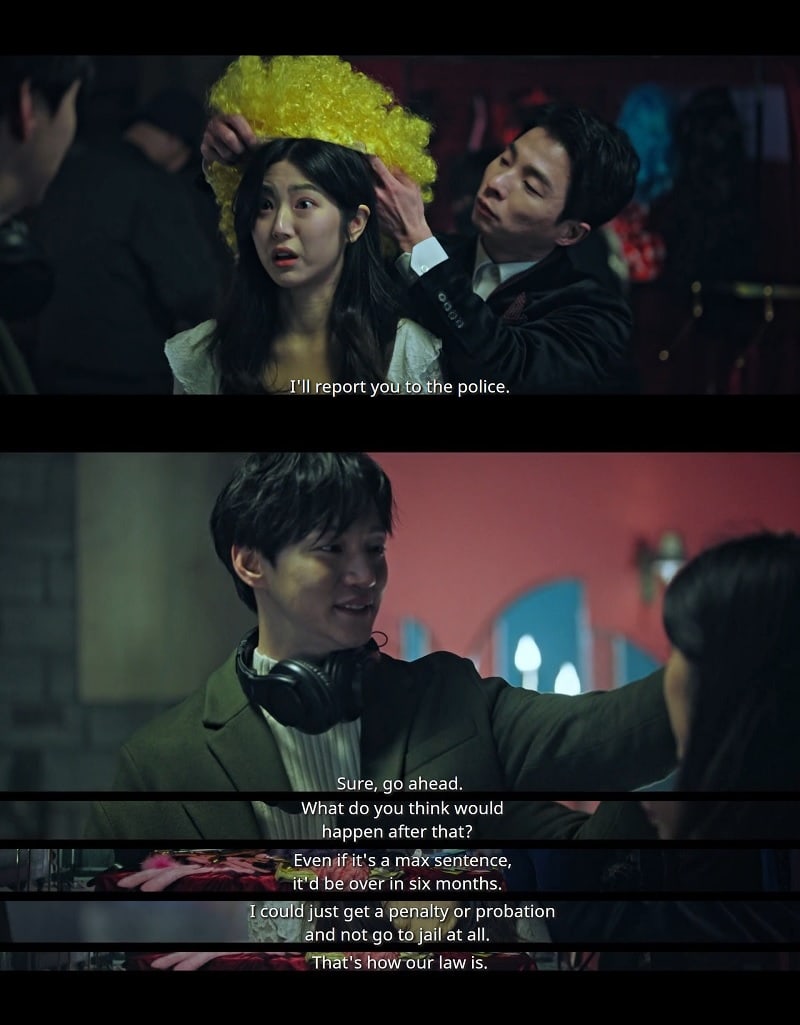 Needless to say, Kim Do Gi is fuming, and thus raids the film set. It’s really satisfying to see our favorite vigilante beat the evildoer so that the latter will likely never ever be able to commit such crimes again. You’re the man, Do Gi!

The tenacious prosecutor Kang Ha Na (Esom), is starting to get on Park Yang Jin (Baek Hyun Jin)’s nerves, which is why the U Data chairman gives his underlings the shocking order to take her out. Two cars appear and try to make Kang Ha Na’s car get into a fatal traffic accident. Park Yang Jin didn’t reckon with Rainbow Taxi though, and Kim Do Gi successfully saves her while showing some impressive car stunts that will leave you in awe.

At this point, it should be noted once again that Lee Je Hoon is doing the car stunts himself! His dedication to his work is truly remarkable, and I’m relieved that the shooting of these dangerous scenes wrapped up without any accidents.

Kim Do Gi being tortured

Kim Do Gi getting knocked out and tied up by Park Yang Jin’s guys was another shocking moment. It really hurt to see him get heavily beaten up, and it made you wonder how he could possibly save himself from this precarious situation. But luckily, Kim Do Gi isn’t alone and Rainbow Taxi’s two engineers come to his rescue. Considering that Choi Kyung Goo (Jang Hyuk Jin) and Park Jin Uhn (Bae Yoo Ram) don’t know how to fight and weren’t equipped with any weapons, they showed great courage by infiltrating Chairman Park’s estate. It was very beautiful to see how loyal they are. 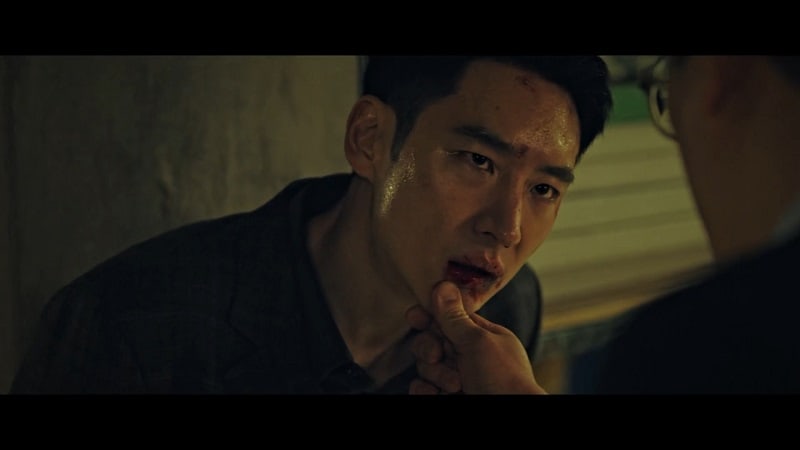 With their help, Kim Do Gi frees himself and knocks out all of Park Yang Jin’s underlings in a visually pleasing fight scene. The newly released original soundtrack by musical actress Cha Ji Yeon who plays the loan shark lady Baek Sung Mi rendered the scene even more powerful. 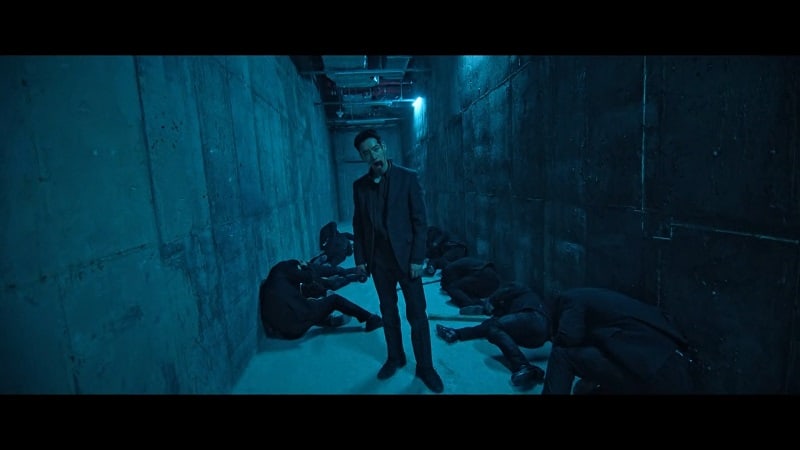 On a side note, the drama always manages to seamlessly incorporate little moments of comedy even during the most intense parts of the story. Park Yang Jin trying to flee from Do Gi on a light scooter is simply hilarious! 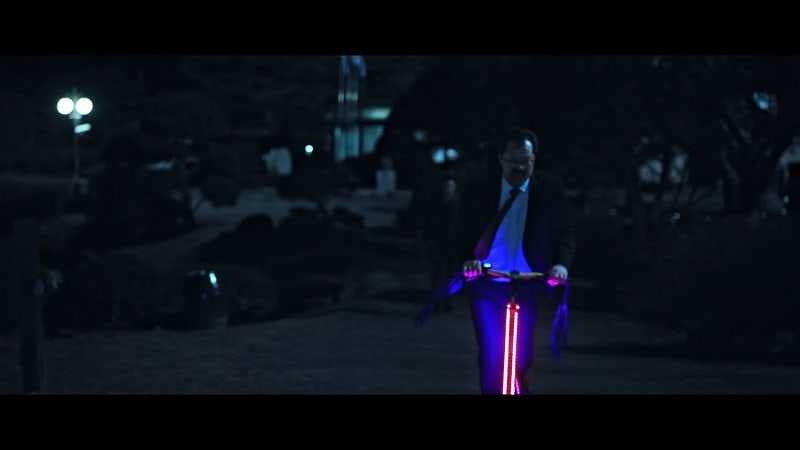 Jo Do Chul (Jo Suk Hyun)’s previous escape from the hands of Baek Sung Mi made me really anxious. It felt like an ominous sign, and it indeed proved true. Even though it was foreseeable, watching Jang Sung Chul (Kim Eui Sung) get a visit from Jo Do Chul and ending with him lying on the floor with a stab wound still left one shocked.

Parts of their encounter were shown side by side with a cathartic explosion, which made it even more impactful due to the stark contrast. Hopefully next week we’ll see that Jang Sung Chul is not badly hurt! 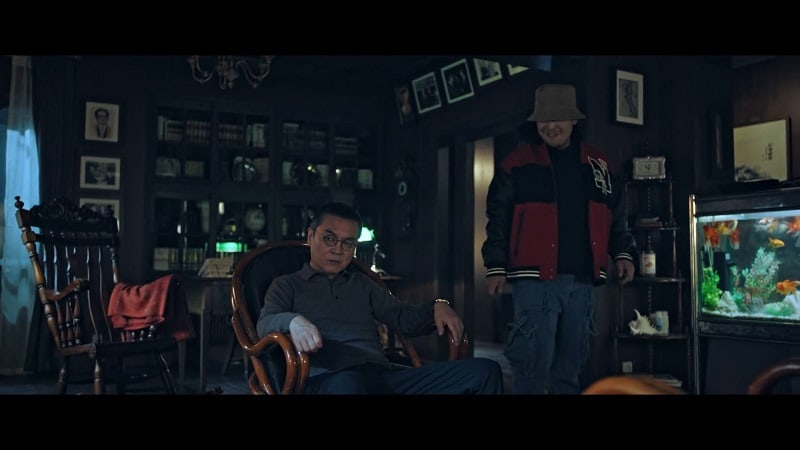 Rainbow Taxi blowing up the data center is the gratifying catharsis both Ahn Go Eun and us viewers had longed for. It’s a majestic moment and the poignant climax of the drama’s first half. Nonetheless, it was still surprising since we didn’t expect the team of vigilantes would go as far as to actually endanger people’s lives with their revenge. I was both in awe and in shock.

To Rainbow Taxi’s defense, Park Yang Jin did go into the data center out of his own free will after freeing himself from the rope they tied him with. But Kang Ha Na and the police officers were still exposed to danger. Let’s see if the drama will address this point in future episodes. 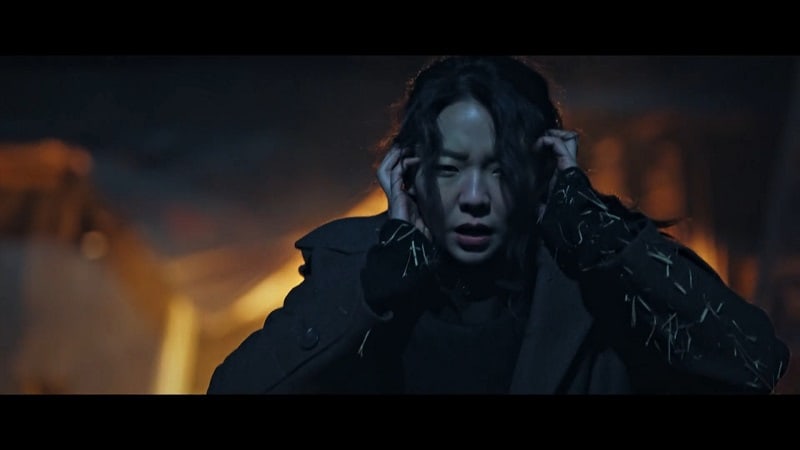 Hey Soompiers! What are your thoughts on episodes 7-8 of “Taxi Driver”? How did you feel about the explosion? Let us know in the comments below!

Currently watching: “Youth of May,” “Taxi Driver,” “Mouse,” “Miss Crow with Mr. Lizard”
All-time favorite dramas: “Ode to Joy,” “Back in Time,” “From Survivor to Healer,” “Children of Nobody,” “My Ahjussi,” “Hospital Playlist”
Looking forward to: “Move to Heaven,” “Hospital Playlist 2,” “The Oath of Love“