Yoo Jae Suk and Ji Suk Jin recently reminisced about their past together on “You Quiz on the Block”!

The May 5 episode of tvN’s “You Quiz on the Block” was a special titled “People Yoo Jae Suk Likes” in celebration of Yoo Jae Suk’s 30th debut anniversary.

The second friend he introduced was none other than Ji Suk Jin, his longtime close friend. Ji Suk Jin talked about the period of time when Yoo Jae Suk was not famous, sharing, “When we both didn’t have work, we would meet up and hang out with other people who had nothing to do at our friend’s studio apartment. I’d ask my mom for 10,000 won (approximately $8.88) and go there.”

He continued, “Whenever we’d go to the club together, we wouldn’t have money for snacks so we’d just order one fruit snack and last six hours with that.” Ji Suk Jin also shared, “When Yoo Jae Suk wasn’t with us, we said among ourselves, ‘He’s so funny, we don’t know why he gets like that on broadcasts.’ Park Soo Hong once asked, ‘Who do you think will be most successful in the future?’ and he picked Yoo Jae Suk.”

Yoo Jae Suk responded, “When I was having a hard time, I talked a lot about those worries with Park Soo Hong. He would think of ideas for me and repeatedly recommended me on ‘Our Happy Saturday’ [a variety show]. He tried to help me, but it didn’t work out well.”

The two also spoke about their beginnings on “Running Man,” with Ji Suk Jin revealing that he tried to leave the program at the start because he felt it didn’t match with him. He also expressed his gratitude to Yoo Jae Suk for creating his “big nose” character for him. Ji Suk Jin added, “I believe that Yoo Jae Suk should earn more money. In the sports industry, the top [athletes] receive incredible amounts of money. Since Yoo Jae Suk is at the top of the entertainment industry, I think he should get more money.”

He continued, “Yoo Jae Suk thinks a lot about his programs, but I wish he would do that less. Exercising and going to the dermatologist are all so that he can do better for his programs. He should mix in some observation programs, but he only takes difficult shows. However, your health will not support you forever.” 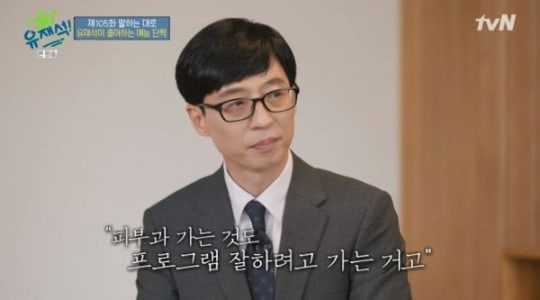 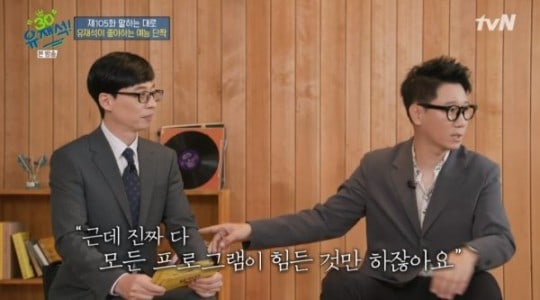 Regarding why he doesn’t appear on observation programs, Yoo Jae Suk explained, “This is just my personal opinion, but I wonder whether it’s meaningful or if there is a need for me to also hop on the trends and mainstream topics people talk about. If I think filming comfortably is fun for me, I can just find meaning in that, but I also end up thinking about whether I’m earning money too comfortably. I’m not saying that others are like that, but that’s just how I personally think.” 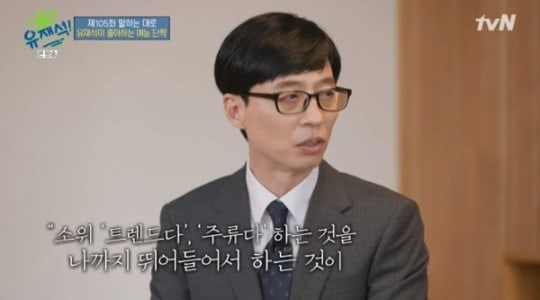 Watch the pair on “Running Man” below!

Yoo Jae Suk
Ji Suk Jin
Running Man
XPN
You Quiz on the Block
How does this article make you feel?