On May 4, according to the Financial Supervisory Service’s Electronic Disclosure System, the Korea Exchange had demoted SM Entertainment and YG Entertainment from blue-chip companies to mid-sized businesses the day before.

Other classifications include venture businesses, which the Korea Exchange considers to be rising stars in the business world according to various other criteria, and the technological growth businesses, which are for new listings. Companies that do not fall into these other categories are called mid-sized businesses.

SM Entertainment took a serious hit in 2020 with a net loss of 80.3 billion won (about $71.7 million). Their sales amount went through a severe drop compared to the previous year, and the company also suffered losses in investment of up to 13 billion won (about $11.6 million) through their subsidiaries and joint enterprises. SM Entertainment had expanded its mergers and acquisitions from 2017-2018, but ended up suffering losses in advertising and food and drink franchises due to the COVID-19 pandemic.

Of the traditional “Big Three” entertainment companies in South Korea (SM, YG, and JYP Entertainment), only JYP Entertainment maintained its status as a blue-chip business. Even though its average sales for the past three years was the lowest of the Big Three, it showed consistency by increasing its net profit by 20-30 billion won every year. In the same time period, it recorded an ROE of 18 percent.

Stock analysts theorized that this fluctuation in performance may be due to the large number of subsidiaries that SM and YG have. Other theories include the transparent governance structure of JYP Entertainment, where founder Park Jin Young focuses on content production and leaves the chief executive officer and chief financial officer roles to others, preventing the reckless business expansion that can come from having a single owner. Park Jin Young has also established a system of producers in JYP Entertainment to reduce his own role as a producer at his company and to prevent fluctuations in quality across albums. 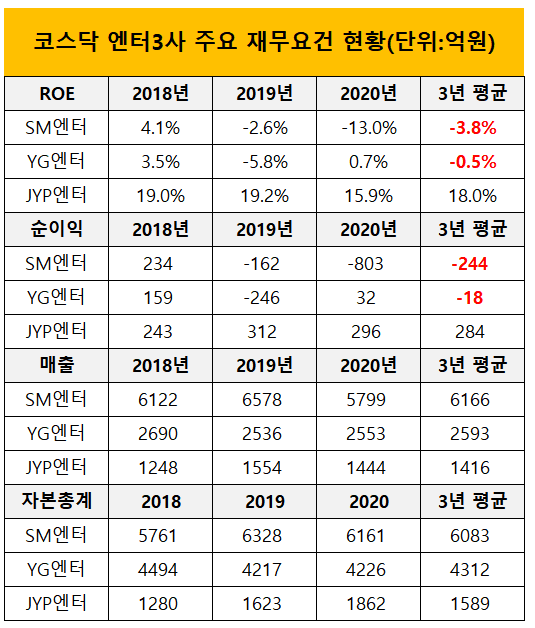 Thanks to 인수 for the tip!